As mentioned last week, SteelyKid is doing Odyssey of the Mind this year, and her team has elected to build a balsa wood structure. The goal for these is to support the maximum possible weight, and the first step of the testing is to put a "crusher board" on top. This is a couple of 18" square sheets of plywood glued together with a hole through the middle for the safety pipe that runs up the center of the structure to keep everything aligned.

Since one part of the team had a test structure ready at the end of the last meeting, I wanted to have something we could use to see if it would hold weight. So I went to Lowe's and picked up a few 2' squares of particle board and committed some rather trivial carpentry: 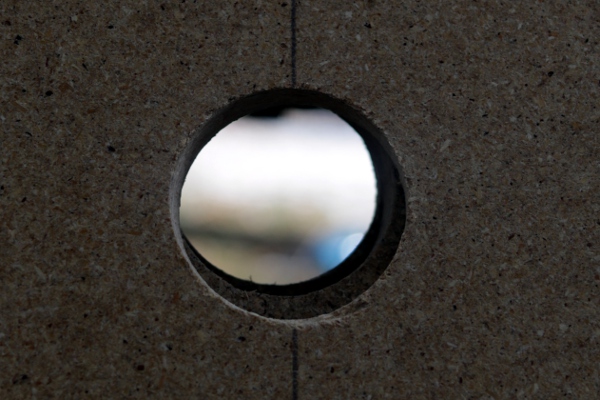 View through the hole I cut through some pieces of particle board to use testing SteelyKid's balsa-wood structure for OM.

(I also took a randomly artsy picture of my work, because that's what I do...)

The final structure is limited to 15 grams of balsa wood and glue; SteelyKid's test structure weighed in at 6g. It held two sheets of particle board with a weight of a bit more than 9lbs each (so a total mass of about 8.2kg). The problem calls for taking weight off the structure, then putting it back again, so we tried that; the second time we put the boards on, one of the cross beaks cracked a little, and the third time one of the cross braces popped off.

Still, that's a pretty impressive ratio, and it was a first attempt. They can more than double the mass of balsa wood they use for future structures, too, so there's a decent chance they'll be able to make something that can hold a member of the team...

Come on, Chad! Where's the picture of the tower???

It's at the first link. I couldn't get a photo of the tower under the boards, because I was the one lowering the boards into place. One of the other parents took a few with his phone, but I don't have them.