The Pip is nuts about superheroes, so when he and his speech teacher made a book, naturally, it introduced a new super hero: Lightning Bolt. It's only a couple of sheets of paper folded in half and stapled, and the text and illustrations were done by his teacher, but the contents are 100% our Little Dude, so I'll reproduce it here.

LIGHTNING BOLT by [The Pip] Orzel

Speciality: Studying super powers. In his lab there's a computer that can communicate with Lightning Bolt.

Uniform
-- made of metal
-- Protects Lightning Bolt from villains

[Illustration: A boot with a lightning bolt shooting from the toes]

"Charge"
(one of Lightning Bolt's villains)

Half Human, Half Rhino

Sometimes he gets mad and defeats himself. Lots of times he runs into buildings and knocks them down on himself. 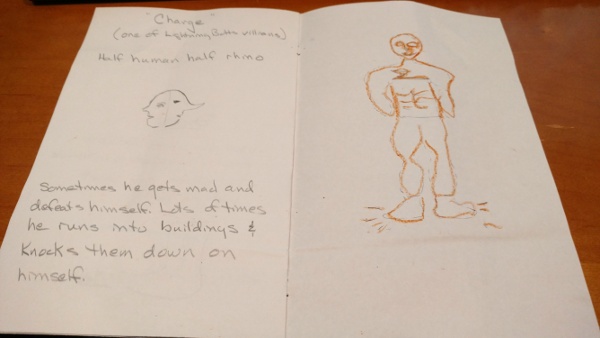 A page from the Pip's book about Lightning Bolt.

So, there you have it: The Pip's superhero creation. Watch your back, Stan Lee.

If Charge is a play on Mr. Boom's electrical powers, that's pretty clever. If not, it's still a pretty cool villain.

I'm pretty sure that "Charge" in this case wasn't an intentional Coulomb reference. I think it's a reference to the villain's rhino attack, and only accidentally makes physics sense.

Len Boom as a secret ID name really sounds like something out of a silver age comic, too.