Another week, another batch of photos. This is coming on Friday rather than the weekend because I'm going to be incommunicado for most of the next week, and have some free time now. 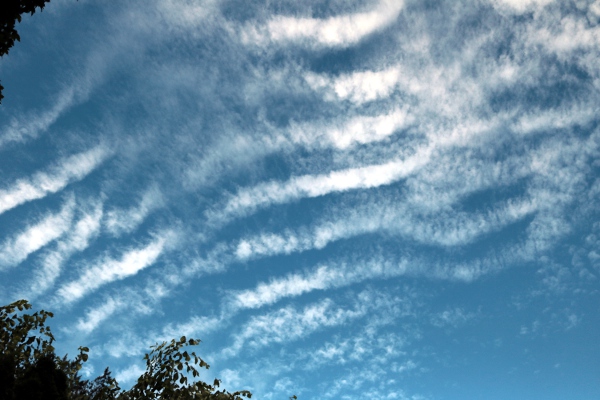 Gravity wave clouds above our house.

Sure, LIGO detected gravitational waves from a second pair of merging black holes, but I found me some gravity waves.

(The pattern was much more pronounced 5-10 minutes before this was taken, but I was in the car driving when SteelyKid pointed it out.) 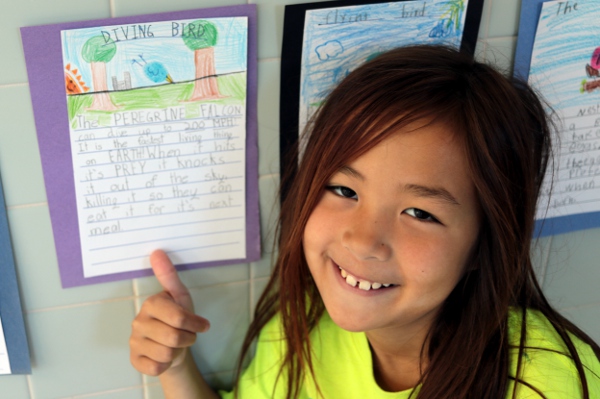 SteelyKid with her hand-written report on the peregrine falcon.

SteelyKid's second-grade class has spent the last month or two researching birds-- each kid picked a particular species, and they used library books and Google on the school computers to amass a huge amount of facts about their chosen birds. Then they made slide presentations in Google Docs about their birds. (And some other things as well-- SteelyKid excitedly told me in the car one afternoon "I typed your name into Google Image Search, and it came up with a picture of you and Mommy! I put it on my 'About the Author' page!")

The photo above is not that-- I have the slide deck, but don't want to post it-- but is a more traditional sort of second-grade project hanging in the hall. From this, you can learn that her bird was the peregrine falcon, and she's really excited about how fast they dive. 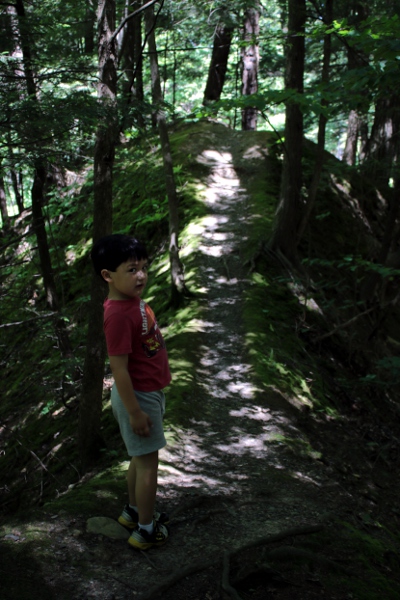 The Pip is somewhat skeptical about walking down this path.

I've had a lot of Pip Time this week, because his day care was closed Monday, then late Monday night he started complaining that his throat hurt, and it was officially diagnosed as strep on Tuesday morning. So he was home from school, mostly with me, Monday through Wednesday. Of course, he's got the same mutant immune response as his sister, where he gets strep throat to a sufficient degree that he's not allowed to go to school, but it doesn't impact his appetite or energy level at all.

So we went on a couple of "adventure walks" to tire him out and keep me from losing my mind. This shot is from a hike through the woods near Lock 7. He was half right to be dubious about this path, because it dead-ends on a little plateau overlooking a massively overgrown creek bed, but it has a nice view, and he chattered a lot about how cool it was to walk this really narrow path. 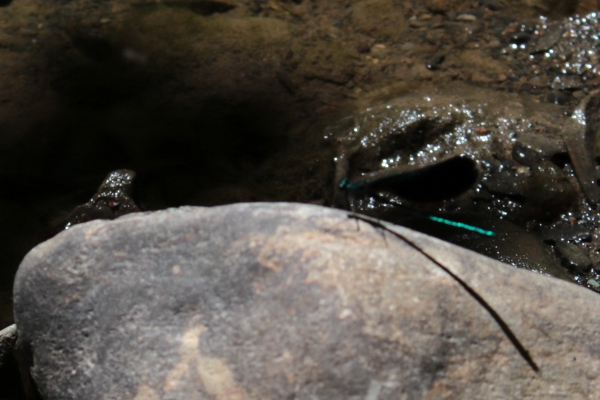 Not the greatest photo, because I couldn't get close enough without spooking them, but The Pip was really impressed with these iridescent green dragonflies around the creeks near Lock 7. Largely because there's a Wild Kratts episode about dragonflies, so he had all manner of nature facts about them that he could relate to me as we walked. 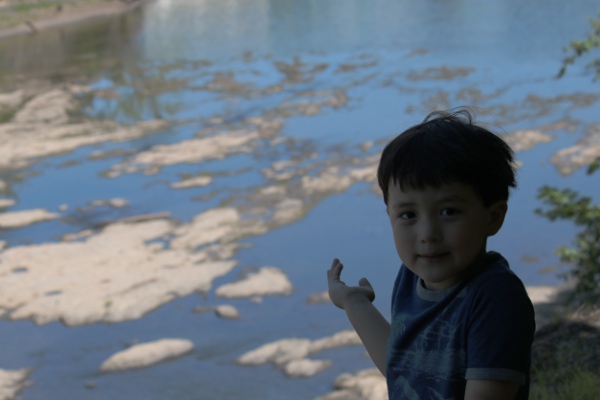 Wednesday's "adventure walk" was over at Peebles Island State Park, where the Mohawk flows into the Hudson. The highlight of this was when The Pip found a really big feather-- seriously, the thing is like a foot and a half long-- on the path. But while I have a lot of photos of him waving his feather around proudly, I love his look in this one. He's an expressive Little Dude. 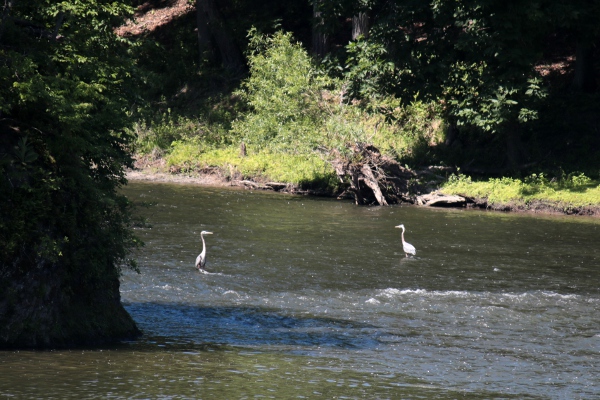 Some herons in the Mohawk near Peebles Island.

And it wouldn't be an adventure walk without some wildlife, so here's a telephoto shot of a couple of herons (I'm fairly certain that wading fishing birds in this part of the world are herons, anyway) taken from Peebles Island.

This wasn't the nature highlight for The Pip, who couldn't really pick them out except on my camera display, nor was the garter snake we saw slither down the cliff. No, his favorite bit was when we saw a groundhog fleeing into some weeds. Specifically, he kept chattering about how "we saw a groundhog's BUTT!" Because he is, after all, four and a half years old.

And that's the current state of nature photography in Chateau Steelypips.

Hello,i have read your article in Forbes about the importance of "humanities" for a scientist and i would like to ask you,how can somebody knows if he is a scientist that loves art or an artist that loves science? In other words,if somebody loves both of them,how can he decide his main occupation?

Thank you in advanced.

What are those white bits in the water that The Pip is gesturing towards in photo #288? The shadowing isn't right (not to mention the river is presumably flowing) for them to be reflected clouds. Maybe they are rocks, although they look a bit strange for that. The third possibility, that they are mats of water-borne plants, doesn't look too plausible either.

That part of the river is almost completely dry-- there's a dam upstream blocking nearly all of the water. It's really a big flat expanse of rock with small streams and pools of water scattered around. It fills in downstream, behind him, so the cropping makes it look like a deeper river with odd rock formations.