During my sabbatical last year, I decided to try to do a photo-a-day project, taking and sharing at least one good picture a day of something or another. The strict photo-a-day format fell victim to my general busy-ness and disorganization, but I did eventually complete the whole thing. In the final post of the series, I said I might have some wrap-up thoughts in a few days; that was several months ago.

Every time I need to clear some disk space, though, I'm reminded that I left that hanging, so I finally did something in the direction of a summative post, by uploading all the edited pictures from the project to a Google Photos album. There are way more than the promised 366 photos in here, because there were sometimes multiple images on a single day, and some others are photos I took and never used for anything. 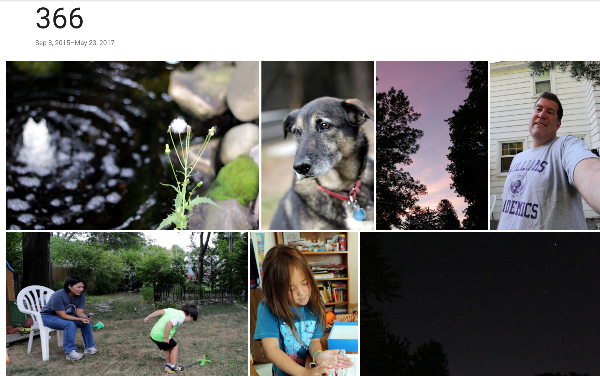 Screen shot of the Google Photos album of my photo-a-day pictures.

(That photo of Emmy in the first row still makes me a little sad...)

So, looking back on this, what are my thoughts?

I think it was definitely worthwhile, especially in the earlier part when I had more time to play around and think about what pictures to take. I learned a lot about the camera and what sort of shots work well, so I take somewhat fewer total pictures to get a handful of good ones these days. (Obviously, for things like SteelyKid's softball games, I'm still doing a lot of burst-mode shooting in hopes of getting a really good moment. For landscape-ish things, though, I feel like I have a better sense of what will work, and don't waste as many shots trying to get stuff that never turns out right.

It's also interesting to look back at that whole collection of stuff, and remember what a busy year that was. We had a bunch of out-of-town trips, including a Disney cruise with the kids and a trip to Rome for a friend's wedding. (There are many more Rome pictures on Google Photos, in other albums-- I only pulled a few for the 366 project...)

Excluding the cute-kid photos (of which there are many) and the science-of-photography experiments, there's a reasonably consistent aesthetic to the kinds of pictures I liked enough to include in this. I've gotten used to shooting mostly with the 22mm "pancake" lens, which has a large aperture and a large-ish field of view. It's a fixed length, which means no zoom, but the speed factor mostly makes up for it. I've been switching back and forth between that and the telephoto lens lately, because SteelyKid's playing softball again, and screwing around with the camera keeps me from getting too bored at the games.

There were a couple of things I had hoped to do, but never really found the time, mostly involving processing. I was going to spend a day or so taking photos with an eye toward making them black and white; there are a couple of B&W shots in the album, mostly where the lighting conditions made it difficult to get a decent color image. I thought it might be fun to try to do that deliberately; still do, really, but it's hard to find time.

I also wanted to get some time to play around more with GIMP (my image-processing program of choice, for quite a few years now) and try more processing than just cropping and color-correcting. In particular, I've never done much with selectively processing parts of images, or trying to edit stuff out of photos. It'd be nice to know how to do those things, because people who know what they're doing get some cool effects that way, but again, it's hard to find the time.

Anyway, Looking at that whole collection, I'm pleased to see that the number of real duds is pretty small. And it was a lot of fun to spend time walking around specifically looking at things as potential photographs; I need to do more of that.

And that is pretty much all I have to say about that...