So, when last I posted an update on kid stuff, we were about to embark for a week in Mexico with family. As you would expect, I have a huge pile of pictures from this, but most of the cute-kid shots feature the kids with their cousins from Illinois, and I try to avoid posting photos of other people's children.

We had a good time, for the most part. The highlight for the kids was probably a "Swim with Dolphins" excursion. SteelyKid did one of these on last year's Disney cruise, but now The Pip is both old enough, and enjoys swimming. Technically, he wasn't tall enough (by maybe an inch) to do the parts where the dolphin pulls or pushes you through the water, but the trainers were super nice, and one of them swam out with him to get him set up, so he got to go. And it was totally worth it for the grin when his boogie board ride started: 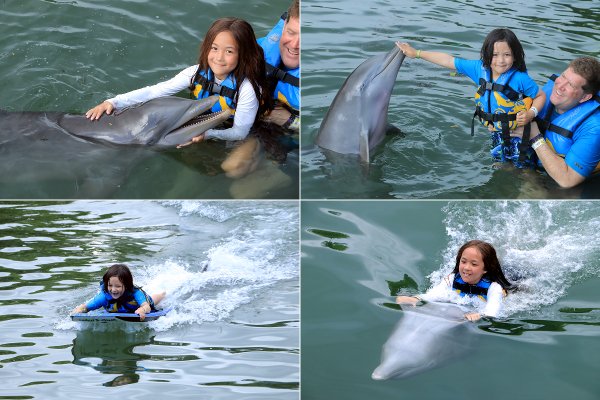 The sillyheads swimming with dolphins.

(Photos by the photographer at the Dolphin Discovery facility, purchased at somewhat exorbitant rates because there was nowhere to use our own camera from...)

We did get one adults-only trip in, an excursion to the Mayan ruins at Tulum, source of the artsy iguana photo in the "featured image" at the top, and also these more conventional pictures: 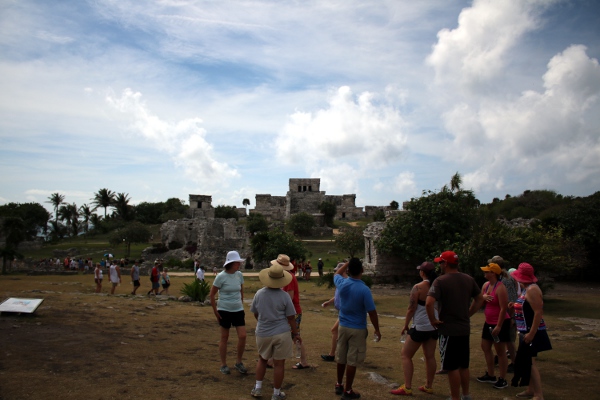 Our tour group at Tulum. 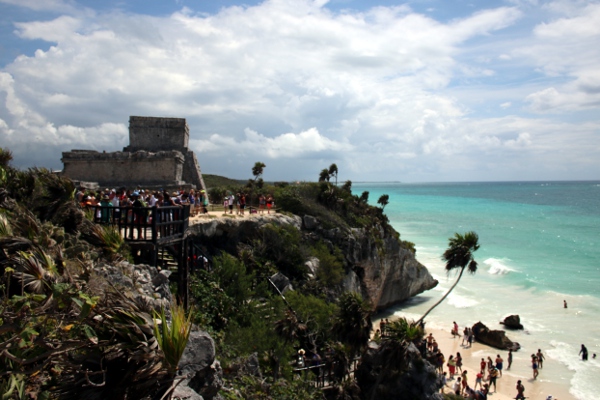 The big temple and beach at Tulum.

Tulum was pretty neat, though much less decorated than Chichen Itza (which I saw twenty-mumble years ago, on a different family vacation), reflecting its status as a trading port rather than a ceremonial center. The ruins are fascinating, if really hot, and the beach is spectacular. The excursion also included a bit of snorkeling in a cave, and in the Yal-Ku lagoon, neither of which I have photos of, because they weren't in places I could use my camera.

Unfortunately, as good as that excursion was, it also led to the absolute worst part of the trip. The excursion included a (not terribly impressive) buffet lunch at Xpu-Ha, where we were seated on an outdoor deck. At the end of lunch, Kate scooted her chair back to re-apply bug spray to her legs, and the chair went over backwards, past the totally inadequate rope "railing," taking her down to the beach below.

The drop was maybe a couple of meters, and when I got down to the beach a few seconds later, she was awake and moving around, so we helped her to a lounge chair and got her some water and a bag of ice for the lump on the back of her head.

"What happened?" she asked. I explained that she'd gone backwards off the edge of the deck, onto the beach. "That's so embarrassing," she said. About this time, the tour guide came by and asked if we needed to see a doctor.

"Give us a minute," I said. And then Kate said "What happened?" I explained again that the chair had gone over backwards, and then asked "Do you remember me telling you this sixty seconds ago?"

So, Kate and I spent the rest of that day in the COSTAMED hospital in Playa del Carmen, which was not exactly an ideal vacation experience. They did a CT scan and some other tests, and confirmed there was no really serious damage, but it was probably three or four hours before Kate started reliably remembering anything about that day.

From a detached after-the-fact perspective, it was kind of fascinating to watch lights come back on-- right after the fall, she just kept asking "What happened?," then slowly added other questions ("Was it my fault?" first, then "Did the kids see?" then "Why weren't the kids with us?" then "Would you tell me even if it was my fault?" ("Honey, after answering this 57 times, yes, I would."), then "How many times have I asked you this?" ("Three hundred and twelve. And counting.") and a few more...). In the moment, it was absolutely h*ckin terrifying. Head injuries have very little to recommend them.

In the end, she's okay. they discharged us that night, after scheduling a follow-up with a neurologist the next day. That guy did a neck x-ray, and recommended a foam cervical collar for a few weeks, plus an appointment with an orthopedist back here in the US. By the next morning, Kate remembered everything about the day up to getting to the restaurant, but nothing between that and the last half-hour or so in the hospital. Which were the only worthwhile parts of that day, anyway, so it's all good...

The staff at the hospital were very professional, calm, and kind in dealing with a couple of scared Americans who spoke basically no Spanish. And the tour company, Cancun Adventures, was also great about the whole deal-- some of their people sat around the waiting room for several hours until we were discharged, then drove us back to the hotel, and they sent a car and driver the next morning for the follow-up appointment. The driver of that was invaluable in dealing with the hospital bureaucracy, and I believe they paid for everything. At least, I wasn't asked to give anybody any money (though I happily would've...).

(As I said on Twitter and Facebook when I mentioned this the next day, any attempt to use this as a jumping-off point to discuss the politics of US health care will get you blocked so hard that it'll crack the glass on your monitor. Don't even think about it.)

So, that cast a bit of a pall over the rest of the vacation. Not too much, though-- in fact, the dolphin swim was the day after the follow-up appointment, and on the last day in Mexico, we went to the Xel-Ha theme park for some snorkeling and other stuff. I was pleasantly surprised at how good the snorkeling was there, though a lot of that was timing-- it got super crowded later in the day. No pictures, though, because we were in the water for most of it.

Anyway, that's what we've been up to recently. And I'll leave you with this photo of Kate and SteelyKid showing off the stylish accessories they picked up on our trip. And also expressing their opinion of me taking this picture... 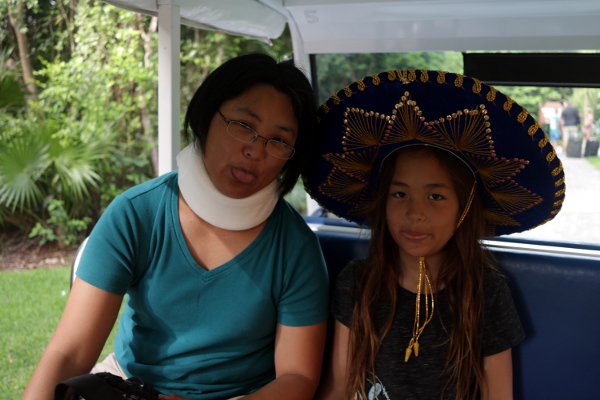 Two meters is enough to do serious damage in a bad landing. I think that if I had been in that situation the question would have been, does Kate go to the hospital in a taxi or in an ambulance.