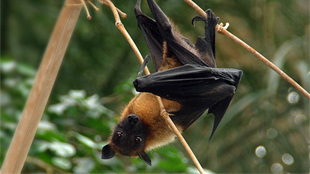 An ambititous project seeks to identify all unknown viruses in mammals to determine the relative risk of infection to humans and to develop strategies to prevent and treat infections before they become pandemics. The pioneering research team is led by Dr. Simon Anthony at Columbia University and Dr. Peter Daszak from EcoHealth Alliance.

The team started by looking for viral infections in the Indian flying fox (Pteropus giganteus), a species with pathogens known to transfer to humans (Nipah and Hendra viruses). Over five years, they sequenced the viral DNA from multiple urine, fecal, and saliva samples and found 55 distinct viruses from nine families. Fifty of the viruses were previously unknown. With continued sampling over the years, they discovered fewer and fewer new viruses. Using statistical analyses, they estimated that flying foxes likely were infected by a maximum of about 58 distinct viruses. Figuring that each mammalian species has a similar diversity of viruses, they estimated the total number of mammalian viruses to be about 320,000. Although admittedly that number is a rough estimate and could be skewed as they only examined one species that may be infected with more or less viruses than other mammals. If that number is correct, Dr. Anthony was quoted in The Scientist as saying, “we could feasibly find most of the viruses that exist in mammals in the next 20 years.”

One of the new viruses they discovered was GBV-D which is similar to the virus that causes hepatitis in humans. Because of this, they are now searching for people with undiagnosed hepatitis near where they discovered the infected animal in Asia to see if anyone is infected with GBV-D. Being able to identify viruses before they infect people or cause a pandemic is an amazing advancement in modern medicine.

I'll admit to being a wee bit skeptical of their methodology. And, it seems that the concluding number 320,000 is large enough to justify a major research effort, but small enough to be considered tractable with that degree of effort.

Even if 320,000 is within a decimal place of correct at present, it's a moving target: each year we make progress on quantity X, but meanwhile quantity Y of viruses are mutating, and as we move on to subset Z, some of the ones in X have also mutated.

Bottom line is, the world needs to devote far more research effort and money to public health, and to the study of infectious agents. "Whatever it takes" to get there, short of another pandemic, is a good thing.