One of the reasons that climate change is such a big issue is because the global climate is an integral part of the Earth’s entire ecosystem, tied to so many of the big and little things that society cares about. Figuring out how all these complicated pieces tie together is hard, as is linking these pieces together in the minds of the public so that we – and our policy makers – can grasp the true implications of a changing climate and plan for them. Because this is so important, I expect that many of my future posts here will address this issue, but let me start with one example: the relationships between climate, snow, ice, and water resources.

Some of my earliest research on climate and water (my doctorate in 1986 evaluated the regional hydrologic impacts of climate change) showed that one of the most critical impacts of climate change would be changes in the snow/rain dynamics in mountains. Since then, more and better research has confirmed and strengthened our understanding of how vulnerable water systems – and especially mountain regions – are to climate changes. Indeed, we already see impacts in the form of disappearing tropical and high-latitude glaciers and ice caps, changing rainfall patterns, and increased water content in the atmosphere, not to mention the growing influence of climate change on the frequency and intensity of some extreme events.

The climate is incredibly complex. But, in fact, many climate impacts are actually pretty simple to understand. Let’s focus for the moment on just one piece of the climate change picture: temperature. We know the Earth is warming up because of human activities. This fact alone would mean that more of the precipitation that falls will be rain and less of it will be snow, even if total precipitation stays the same (it won’t, by the way). Higher temperature also means that what does fall as snow will melt faster and run off earlier into our rivers and streams. And any ice sitting on the ground will melt faster than it would have otherwise.

Snow. Glaciers. Icecaps. All of these are vulnerable to climate change, especially rising temperature. This isn’t theory. It’s fact. In our heavily videoed, satellite-observed, cell-phone-connected world, the evidence can be delivered instantly to the screen you’re looking at right now.

Take the Himalayas. The Hindu Kush-Himalayan region (HKH) spans thousands of miles and seven countries (Afghanistan, Bangladesh, Bhutan, China, India, Nepal, and Pakistan) *[Ed. oops: eight! See comment #1 below for correction] and contains many of the largest glaciers in the world. The Himalayas are the headwaters of some of the most important rivers as well – including the Ganges, Indus, Brahmaputra, Salween, Mekong, Yellow, and Yangtze. These rivers provide drinking and irrigation water for at least one and a half billion people. A recent assessment by the U.S. National Academy of Sciences offers a comprehensive look at how climate change will affect this region and its water security. 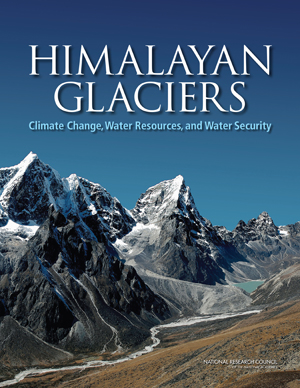 The recent report on climate change and the Himalayan region from the U.S. National Academy of Sciences.

Even with climate change, the HKH region will have glaciers for centuries, but as temperatures rise, the lower elevation glaciers and snow will (and are beginning to) melt, recede, and disappear. In the eastern and central Himalayas, there is evidence that glacial retreat has accelerated over the past century. Black carbon and dust from burning of fossil fuels and wood are also accelerating this effect by darkening snow and ice and absorbing more energy from the sun.

The total amount of water in the rivers downstream may not change much – total flow will depend on how much precipitation overall (rain and snow) falls, especially during the rainy/monsoon seasons. But the timing of those flows is especially vulnerable to climate change – as it is in the western mountains of the United States, including the Rockies and Sierra Nevada. For river flows that are dependent on melting snow and ice, such as the rivers in the eastern Himalayas, the earliest climate change impacts are likely to be changes in the seasonality of flows, with increases in winter flows (as more precipitation falls as rain instead of snow, and as existing ice and snow melt faster) and then decreases in summer flows.

Because of the physical and climatological complexity of this huge region, the ultimate impacts of climate changes are complex and still incompletely understood. More basic science is needed – for example, even estimates of the total area of glaciers in the HKH region vary by almost a factor of two. But not everything is equally uncertain (a point often lost, by the way, on those who prefer to emphasize what we don’t know over what we do know).

The eastern Himalayas and the Tibetan Plateau are already warming, especially at higher elevations. Glacial retreat, especially in the central and eastern Himalayas, is already occurring and likely to accelerate. Lower elevation glaciers are disappearing faster than higher (and colder) ones. Black carbon and soot are contributing to faster ice melt. In the near term, some rivers may see increases in flow as ice melt grows. In the longer run, most regional rivers are likely to see changes in the timing of flows, with a concomitant change in flood and drought risks. And rising temperatures are also likely to increase evapotranspiration rates over large parts of the irrigated areas of the region’s major river basins, increasing total demand for water in places where demands already exceed supply in many part of the year and where food production is critical. These are the regions likely to be on the front line of any challenges to water resources from climate change.

Closer to home (for those readers in the western hemisphere), keep a close eye on the water towers of our own water supplies: the Rocky Mountains, the Sierra Nevada, and the Alps. Expect to see rising snowlines. Expect growing winter flows and flood risks as snow turns to rain and decreasing summer flows as the snow disappears earlier and earlier in the year. Expect to see our own (much smaller) glaciers shrink and disappear, as is already happening in Glacier National Park. [In a straight-faced comment on the Glacier National Park website, the National Park Service states:

“Despite the recession of current glaciers, the park's name will not change when the glaciers are gone.”

Maybe that’s fitting: disappearing or no glaciers in Glacier National Park will be a mark of our failure to act.

In the end, significant climate changes will occur because we’ve taken too long to acknowledge and react to the problem. And that means unavoidable impacts for water resources (and other things), and inevitable adaptation and reaction. But planning and acting now can still reduce the worst consequences later. There are plenty of things we can do, including improved water-use efficiency, better planning for floods and droughts, more sophisticated reservoir operations, and stronger institutions to manage water and reduce water conflicts. More on these options later.

Update: Prajjwal Panday has just tweeted me that in fact, there are EIGHT countries that are part of the Hindu Kush Himalayas, and The International Centre for Integrated Mountain Development (ICIMOD) group that addresses issues in the region: Afghanistan, Bangladesh, Bhutan, China, India, Myanmar, Nepal, and Pakistan. ICIMOD is based in Kathmandu, Nepal.

Thanks for the correction!

Well put we have already seen significant declines in summer runoff from glaciers in the North Cascades. In the eastern Himalaya these are dominantly summer accumulation type glaciers and the main melt season coincides with the main wet season, hence summer glacier runoff is not as crucial to these watersheds.

"Maybe that’s fitting: disappearing or no glaciers in Glacier National Park will be a mark of our failure to act." What, specifically, must we do to make sure the glaciers in glacier park stop receding and begin to grow again?

Someone clued me in to this nice comparison of Muir Glacier in Alaska from 1941 to 2004. Pretty dramatic example of our disappearing ice: http://twitpic.com/c5lo3p.