Dark Matter: Is it right in front of us?

Last year, I had just finished my Ph.D. studies, and had moved to Madison, WI to teach introductory physics at the University of Wisconsin. I was working on this paper, and when I submitted it, I got a phone call from New Scientist magazine's space division.

Fast-forward two weeks, and I find this article online, where I got to see my name in print:

Now, scientists led by Ethan Siegel of the University of Wisconsin, in Madison, US, have come up with a new way to potentially reveal blobs of dark matter drifting nearby and perhaps even pin down what it is once and for all.

And I thought to myself, wow, I actually did that! It's still a neat idea, a year later, as I've kept working on it and just submitted another paper extending my work. Let me break it down for you, and tell you what the dark matter might be, and how we might be able to find it.

We know, pretty simply, how stars work. We know how much light they give off, and that's very closely related to their mass. Brighter stars are more massive; dimmer stars are less so. 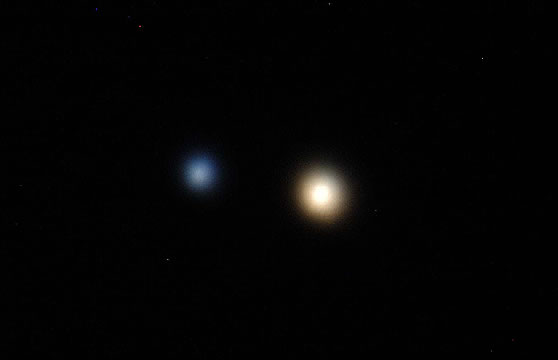 So when we look at an entire galaxy, what we're really measuring is all of the light coming from the stars in it. We know, therefore, how to tell how much mass is present in the stars in a galaxy, or in a cluster of galaxies, or in any astronomical object we look at.

But we have a different way of measuring mass as well: we know how gravity works. So we can watch how galaxies rotate, 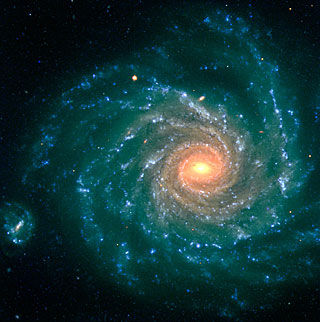 or we can look at gravitational lensing, and we can measure how much mass is there from gravity. This way, we know how much total mass there is, and we can see how much of it is from stars.

The problem, as you might expect, is that the numbers don't match up. In fact, what we find is that 98% of the mass is not in stars. Not only is it not in stars, but of that 98%, only about 13% is made up of protons, neutrons, and electrons; we have very little idea what the remaining 85% of the stuff in our galaxy is. So we give it a name, dark matter, since it has mass, and exerts a gravitational force, but doesn't give off light or interact through any of the other forces. And figuring out what dark matter is will be a nobel-prize-worthy discovery, if we can detect it.

We know from observations that all galaxies have a dark matter halo surrounding them; what we don't know is whether the halo is smooth, or whether there are clumps of dark matter in them. When we do numerical simulations, though, as well as calculations of different models, we find that they all wind up with clumps in them, like so: 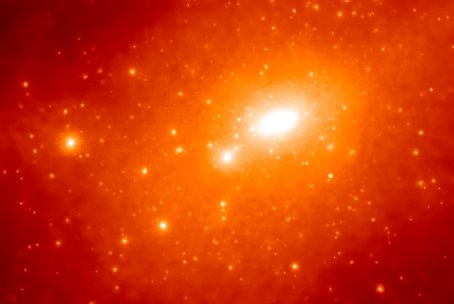 Well, there's a neat trick we can use to see whether there are these dark matter clumps in our galaxy. When you look out at anything, the light travels to your eye in a straight line. But if there's something with mass in the way, the mass will bend the light around it according to Einstein's theory of General Relativity. If the mass is close to the line-of-sight, the bending is more severe; if the mass is far away, the bending is very slight, and the actual position lines up very well with the apparent position, like so: 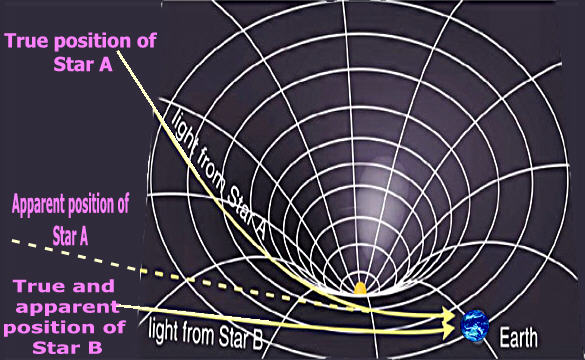 Well, these theoretical dark matter clumps are too light and too diffuse to cause a visible effect in starlight. But, there are special stars that emit radio light at such high precision that they could see the difference between a dark matter clump being close to it and one being farther away. These stars are called pulsars, and they are so well-measured that the best and fastest of them rotate nearly 1000 times per second (and remember, these are stars weighing as much as the Sun does), and have their periods known to within 10-18 seconds!

So, if we have dark matter clumps in our galaxy, watching pulsars could allow us to find them, since the pulse timing will change as the dark matter clumps move through the galaxy. Right now, the odds aren't very good because we don't have enough pulsars, and our radio telescopes aren't good enough. But if they build the Square Kilometer Array, the odds improve tremendously, so much so that we should detect dark matter clumps if they exist using pulsar timing! If we don't see them, it means that these halos aren't nearly as clumpy as we think they should be -- either way, this would be the first chance we have to learn anything about the dark matter in our own galaxy!

Also, FYI, every week (or so) many of the space-related blogs get together and share their best posts. It's called the Carnival of Space, and this week my post on visualizing the Milky Way is on it!

Just checking out how the blog migration is doing.

Oh by the way, the powers that be have just decided that the Square Kilometer Array is to be located in South Africa and Australia/New Zealand. So we can look forward to results, somewhen.

Now the thing I'm testing is to see when and if this comment will ever show in the Recent Comment section which isn't working.

There must be happenings completely undiscoverable by us, forever unknown to us. Although I love watching us try.

@MP #2: Um. Particle detectors do _NOT_ use "the known human senses." Humans are not equipped to sense ionization directly, nor to "feel" the passage of either charged or neutral particles through our body. Humans cannot directly sense radio waves, microwaves, ultraviolet light, or X-rays. We build these complicated apparatuses precisely _because_ our "known senses" are entirely inadequate to observe nearly all of the universe.

Cosmic rays were completely and entirely unknown to humanity until we build electrical apparatus (electrocopes) which were sensitive to their passage.

X-rays were completely unknown to humanity until we invented photographic film which was sensitive to their impact.

Neutrinos were completely unobservable until we build very large apparatus to detect and record their very occasional interactions with matter.

Thank you for your reply. I understand completely what you are communicating which is why I typed my comment.

Please allow me to attempt to clarify.

We are using human perception to conceive, build, and interpret the "enhanced" data of the test equipment you mentioned. My question is:

Is our genetically sponsored perception sufficient to "sense" all that is needed to answer the questions we have about the Universe?

What I am attempting to add is that I don't know if we have sufficient physical perception, regardless of what test equipment we devise, to answer all questions about the Universe.

After all, we are implying:

"Because of what I have directly perceived unaided, I will develop and build a piece of test equipment to enhance my perception and solve a problem."

Why do we believe we have sufficient perception to answer our questions?

Or, an alternative question:

Do we believe we can perceive all happenings in the Universe?

Just because our test equipment enhances our perception doesn't mean it is "showing" us everything!

And we are still using our genetically sponsored perception to interpret the results. Which may not be sufficient to get to all phenomena in the Universe.

I am not at all trying to undermine our quest for answers. I love it!

I just can't get past the idea that we may have limited perception. Even though we can build perception enhancing test equipment.

Is our genetically sponsored perception sufficient to “sense” all that is needed to answer the questions we have about the Universe?

What I am attempting to add is that I don’t know if we have sufficient physical perception, regardless of what test equipment we devise, to answer all questions about the Universe.

You're going to have to work harder if you want to present a coherent philosophical argument. For example, you've just posited some sort of version of monist materialism ("genetically sponsored perception") that nonetheless includes plural minds. In certain areas of discourse, this is referred to as "Bad Fazzm."

So, MP, are you suggesting we should give up on our quest for knowledge just because you think it is beyond our grasp? This is the very basis for research - to forge ahead and find the answers, build the equipment we visualize, to aid and enhance our physical senses.
:)

No, MP doesn't understand things and this is their way of making their lack of understanding the result of some "deeper" "understanding" of "reality".

IOW made up BS.