Bring him to me!

The Milky Way galaxy is a relatively big spiral galaxy. So is Andromeda. There are about 20 dwarf galaxies that are gravitationally bound to us; combined with us, all of this makes up the local group. But Andromeda is moving towards us, and eventually, it's going to merge with us. I'll once again show you a video of what this merger might look like:

But what would we see, here in the Milky Way, as Andromeda got closer and closer to us? Right now, Andromeda looks like this:

But Andromeda is also very far away: about 2.3 million light years (770 kpc). The center of it is tiny on the sky, but the whole galaxy, as seen above, is actually 4 degrees across, or eight times larger than the diameter of the full moon! Its apparent magnitude is 4.4, which means it can barely be seen with the naked eye (anything less than 6 can be seen with your eye) if your vision is good and there's no light pollution. 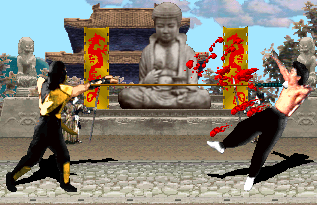 But the Universe will continue to age, and gravity will basically tell Andromeda "Get over here!" When this happens, Andromeda not only gets closer to us, but also starts to appear bigger and brighter in the sky. What does this mean? Let's play Zeno's Paradox, and see what happens when it gets halfway to us, and then halfway of that distance, etc.

And then the merger happens. What will that do to us? Take a look:

Although we don't know exactly what's going to happen, it's a good bet that we won't want to be here for it. Time to find a new galaxy... or at least a temporary home outside of ours while that merger takes place!
Tags
gravity
Video
Andromeda
galaxy
Get Over Here
local group
M31
merger
milky way
Mortal Kombat
Scorpion
Zeno
Zeno's paradox

This is great. I love how you have depicted the possible outcome of two galaxies merging as one. It is truly a sight to see. Luckily, for humans anyway, before the great collision, we will have a front row seat from Heaven to watch this unfold. Great work!

"Time to find a new galaxy... or at least a temporary home outside of ours while that merger takes place!"

I wonder if any alien apartment owner's are willing to sign a billion earth-year lease while we wait for things to calm down.