"The battle, sir, is not to the strong alone; it is to the vigilant, the active, the brave." -Patrick Henry

It's not a good idea to showcase a galaxy for you every Messier Monday, considering that even a crescent Moon can render most of them completely unobservable. Now that the autumnal equinox has passed, however, a very special spiral will be visible after sunset for the next six months or so in a relatively nondescript part of the night sky. Out of the 110 deep-sky objects that comprise the Messier catalogue, a full forty of them are galaxies, although today's object wasn't recognized as one for quite some time after its discovery. 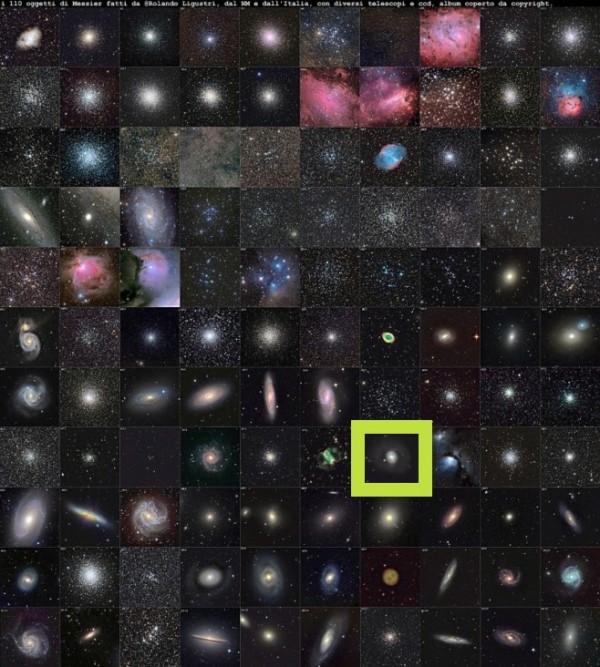 In the east after sunset tonight, as the sky darkens and the crescent Moon heads down in the west, a few bright stars will begin to rise. Just to the north of due east, the night sky's 6th brightest star, Capella, will rise first, followed by the red giant Aldebaran, the 14th brightest, which should have the familiar Pleiades topping it over the horizon. But if you head a little farther south of those more familiar sights, you'll find a relatively sparse star-field with one somewhat prominent star, Menkar, which barely cracks the top-100, but can lead you to today's object: Messier 77. 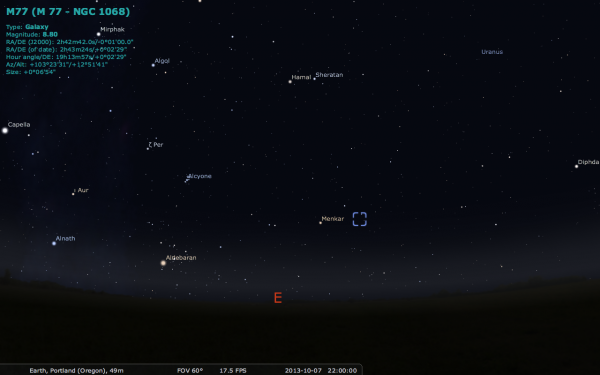 Menkar is by far the most notable star in its section of the sky, outshining all the others around it by at least a full magnitude. There are two other naked-eye stars that stand out near Menkar just to the south: γ Ceti (the brighter one) and δ Ceti (the slightly dimmer one). If you can locate δ Ceti in a pair of binoculars or a small telescope, that will help you find your way to Messier 77. 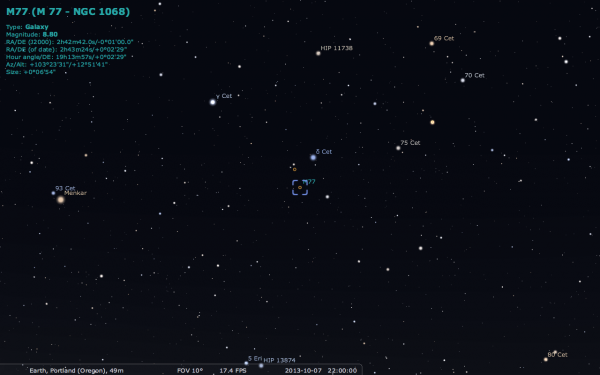 Just about two degrees closer to the horizon than the blue, fourth-magnitude δ Ceti is a just-visible-to-the-naked-eye star, 84 Ceti, and if you make a (slightly) shortened equilateral triangle in your mind, you'll know where to look for Messier 77. 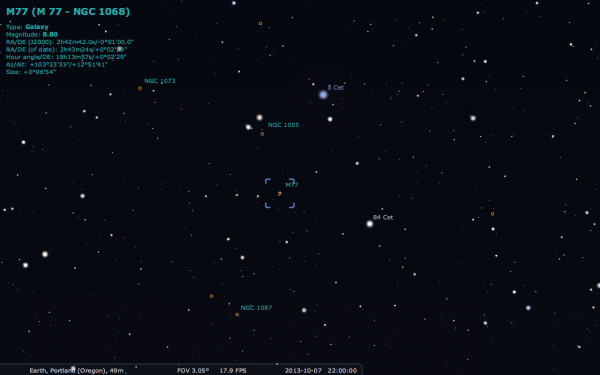 Although it's got a very low surface brightness, like many galaxies, either a large telescope or a time-lapse exposure should begin to bring out the details of this deep-sky wonder. Charles Messier and his assistant, Pierre Méchain, had neither, of course, and described it as:

Cluster of small stars, which contains some nebulosity, in Cetus & on the parallel of the star Delta... Méchain saw this cluster on October 29, 1780 in the form of a nebula.

This was how open star clusters were typically described; it wasn't until the middle of the 19th Century that the spiral structure of this object was identified, and it was classified officially (and correctly) as a galaxy. 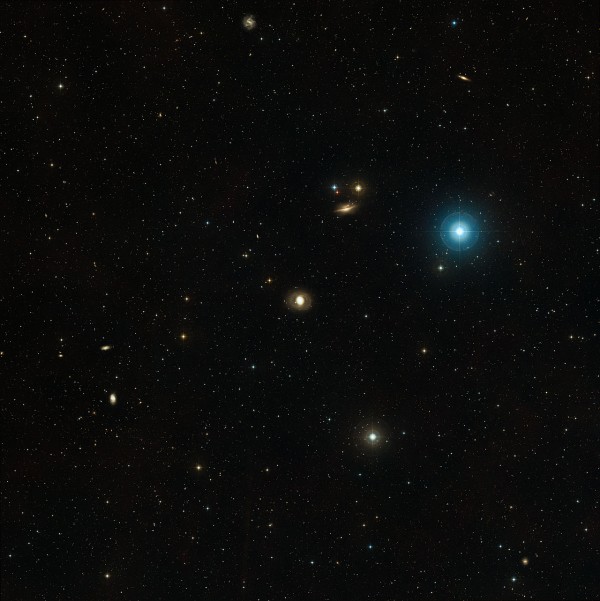 You can see that there are many other galaxies in this part of the sky, including the edge-on spiral with a large central bulge, NGC 1055. Messier 77 is unique in this region, being the largest of the nearby galaxies, appearing to be completely face-on, and also the brightest. 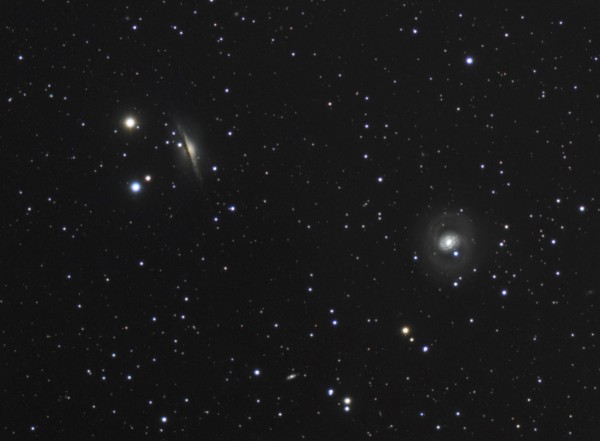 It's also got some of the most interesting detail you'll find in any spiral galaxy, when you take the time to bring out the various features that are lurking within. 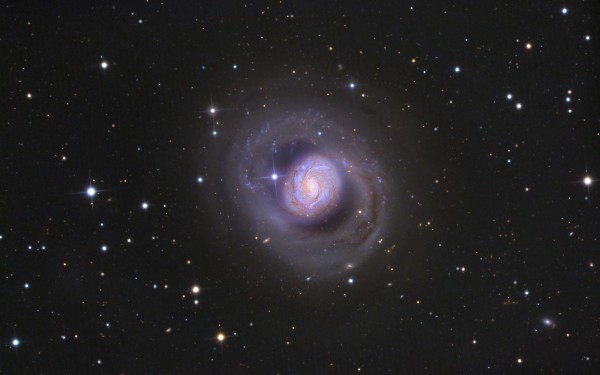 The prominent "double-ringed" features may remind you of another Messier object we recently looked at (M94), and with good reason; there's an intense gravitational interaction happening with this galaxy that created these features!

M77 is not only strikingly beautiful, it's also an incredibly physically interesting system, and while there are clues to this in the extended spiral arms and the huge, dusty gaps in the light-emitting portion of the galaxy, there's an even bigger clue that was revealed when you applied spectroscopy to this object.

While most dusty galaxies exhibit absorption lines when there's neutral gas-and-dust, the center of this galaxy has intense emission lines coming from its core! In addition to that, we later discovered intense X-ray emissions coming from that core as well, along with bi-directional radio jets shooting out of the galactic center. It was quickly established that even though this is a star-forming galaxy, the X-rays have nothing to do with the starburst itself, but are coming exclusively from the very center. 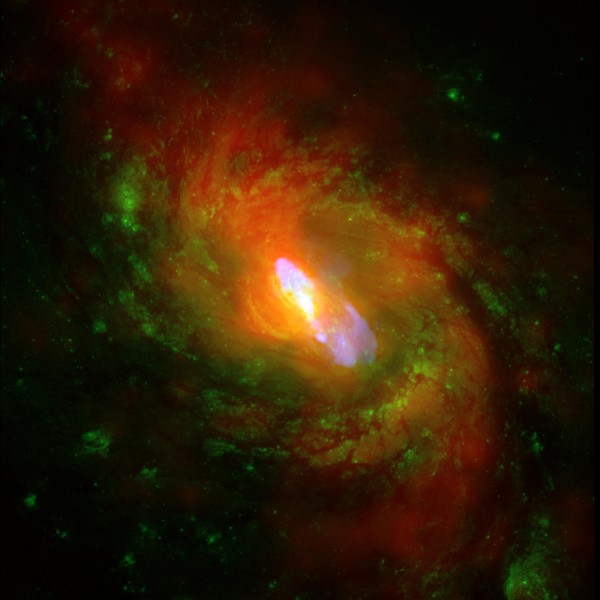 We know now that Type 1 and Type 2 Seyferts, AGNs, QSOs, Quasars and Blazars are all the same phenomenon: a supermassive black hole at the center of galaxies dining on infalling matter. Messier 77 is the first galaxy to be identified as such, and although this phenomenon is ubiquitous throughout the Universe, this one galaxy has a spectacular story all its own. 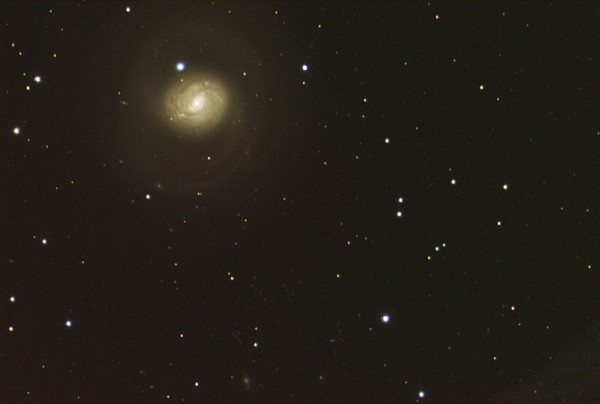 While the core contains a supermassive black hole some 15 million times the mass of our Sun, and an intense region some 12 light-years in diameter of intense star formation, the full galaxy itself is one of the largest in the Messier catalogue. At a distance of 47 million light years, it spans a whopping 170,000 light-years in diameter.

And while you might think it's a face-on galaxy, it's actually inclined to us at some 40 degrees, which just goes to show how deceiving a galaxy's shape can be to the untrained eye. Finally, it's speeding away from us at more than 1,100 km/s, caught up in the expansion of the Universe. 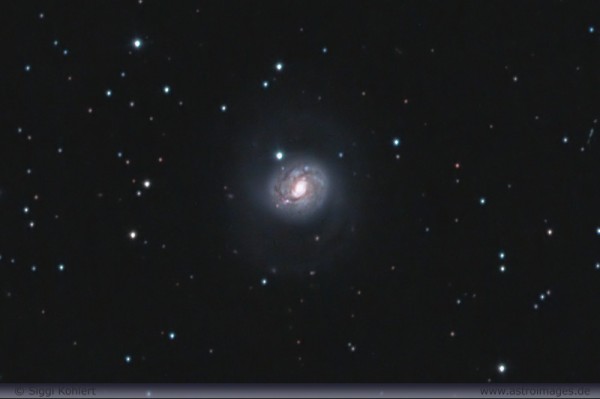 The spiral arms stretch out farther than the vast majority of other spirals, and it's the brightest Seyfert galaxy in the entire night sky. It's also gorgeous, as Ryan Hannahoe brings out in the image below. 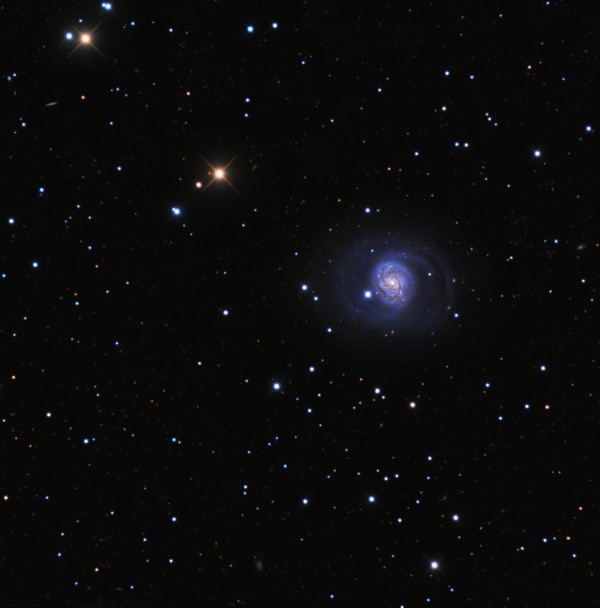 The best image came out just earlier this year courtesy of the Hubble Space Telescope. If you want to know what NASA has done for us lately -- which you might be curious about in the midst of the US government's current woes -- you might want to take a good look at this. 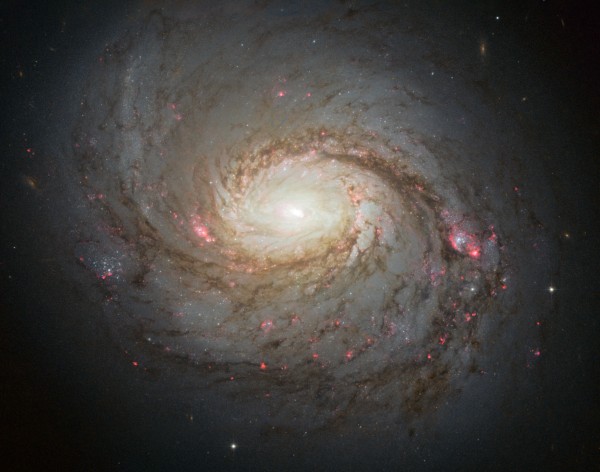 If you'd like to examine a slice-through-the-core of this galaxy in visible light, complete with dust lanes, star-forming regions, and the galactic core, I've taken a crop of the full-resolution version of this picture for you, and don't be afraid to go to the Space Telescope's site itself for a peek at the videos they've created!

And that will take us to the end of Messier Monday! Including today’s entry, we’ve taken a look at the following Messier objects:

Come back next week, where another one of the Universe's deep-sky wonders awaits you, only here on Messier Monday!

Sometimes I imagine, when I read the articles in this series, how incredible it would be to be able to go back with some Hubble photos and show Messier what all these nebulous entries in his catalogue actually are--all the wondrous stuff about each one--and revel in his exhilaration at finding out his name is still associated with these objects almost a quarter of a millennium later. I mean can you even begin to imagine how gobsmacked he would have been to learn stuff like this, and see this quality of image, when in his day no one even had a clue there was anything beyond our own galaxy? Seeing the many deep-field galaxies in the remote background dwarfed by this gorgeous galaxy that he could only see as a tiny, faint fuzzy patch--well, it blows my mind to think about it.

Is there a general consensus about the level of X-ray emissions from the center of a galaxy, above which life would not be possible in the outer arms? And with that, could we effectively rule out the presence of life in some number of galaxies?

And, how close to the center could a robotic device get, before its ability to record and relay images was overcome, or it was otherwise rendered inoperative?

To be clear, I'm not suggesting there's any chance that humans could explore M77 in any way other than via telescopes. Covering a distance of 47 million LY, at an unrealistically high speed of 10%c, translates to nearly a half billion years in transit, not even counting the increase due to expansion of the universe. And yet, one looks at those pictures and can't help but wonder if someone out there is capable of making the measurements in their own galaxy, as we would hope to do in ours. If only there was a way to share the results.

"Is there a general consensus about the level of X-ray emissions from the center of a galaxy, above which life would not be possible in the outer arms? And with that, could we effectively rule out the presence of life in some number of galaxies? "

Good question. I always thought that some galaxies might unfortunately possess attributes that would make life (as we conceive it) exceedingly difficult, if not impossible.

Just wondering if the galaxies that have been observed at great distances (billions of light years away) may not be expanding at such a rate now (as we can't see them now only as they were then) Also wondering what happens to all the energy from all the stats and also because the end of something means the beginning of something else how can there be a beginning or an end???

Mel, your question is dealt with in another thread on this blog. Look for "How big is the unobservable universe" for a starter. There's another one that I can't bring to mind the name of off the top of my head.