Somethin’ Neat about our Galaxy

So last week I was up at Pacific University in Portland, OR for a job interview. As part of a faculty interview, you have to lecture on a topic for undergraduates, but they give you the topic just a couple of days before. My topic was Gauss' Law, which talks about the relationship between an Electric Field and an Electric Charge. Well, the same law holds for Newton's theory of Gravitation with a gravitational field instead of an electric field and a gravitational charge (i.e., mass) instead of an electric charge.

So I'm at work today thinking about this, doing the thing I do messing around with Dark Matter, and I asked the question:

If I applied Gauss' Law to our solar system within the galaxy, how much mass would it "see," and how much of that is normal matter vs. how much is dark matter? 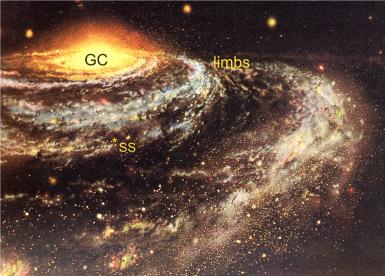 So, I took the best measurements and simulations that were available, and calculated it! Well, the part of the galaxy we "see" is all the mass within a sphere of radius ~8 kpc (the distance from the center of the galaxy to us) centered on the galactic center. And that turns out to be about 90,000,000,000 Solar Masses. Guess what? That's less than 10% of the mass of our galaxy! So over 90% of the mass in our galaxy is invisible to us gravitationally. What's more, of the stuff we can see gravitationally, about 3/4 of that, locally, is dark matter. So even where we are, in the inner regions of our galaxy, the normal matter visible to us gravitationally is only about 2% of the mass of the galaxy! (And a large fraction of that is concentrated at the central bulge.)

Just a quick note to share with you about my day!