Astronomers make use of… molecules?

When I think of molecules, I think of Conan O'Brien doing his skit where he plays Moleculo... 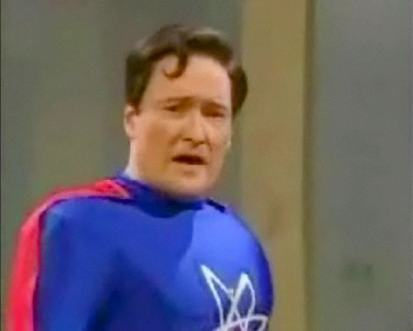 the molecular man! I don't think of astronomy, and I certainly don't think of the leftover radiation from the big bang (known as the cosmic microwave background)! But somebody over at the European Southern Observatory put these two together and made an incredibly tasty science sandwich.

See, we can measure the cosmic microwave background today, because we have photons (particles of light) coming at us in all directions at all locations, with a temperature of 2.725 Kelvin. Theoretical cosmology tells us that when the Universe was younger, it was also smaller. Because the expansion of space stretches the photons in it, causing them to lose energy, it means that photons were hotter when the Universe was younger. 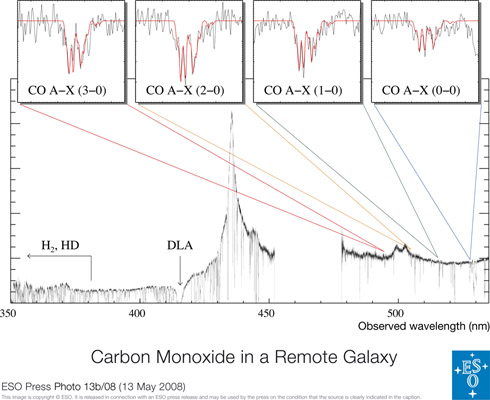 What's nice about this is that, even though it's just what we expected, it rules out or constraints a lot of crazy alternatives (such as theories where the fundamental constants vary), because the temperature of the microwave background evolves according to standard theoretical predictions. Here's a link to the actual scientific paper, if you're into that sort of thing.

By the way, while I've got you thinking about astronomy, NASA just announced that their X-ray satellite, Chandra, found a supernova in our own galaxy that went off in the 1800's, making it the most recent supernova ever to occur in our galaxy! Why'd it take so long to find? Because the whole damned galaxy was in the way: the explosion happened on the opposite side!

When the Universe was twice as hot

“Hell must be isothermal; for otherwise the resident engineers and physical chemists (of which there must be some) could set up a heat engine to run a refrigerator to cool off a portion of their surroundings to any desired temperature.” -Henry Albert Ben One of the most amazing ideas to come out of…

How do we use the CMB to learn about the Universe?

The task is not so much to see what no one yet has seen, but to think what no body yet has thought about that which everyone sees. -Arthur Schopenhauer Most of you who've been reading Starts With A Bang for a while have seen this picture come up many, many times. Why do I keep putting it up, and…

Big Bang Alternatives: Could my light just get tired?

"You can't have a light without a dark to stick it in." -Arlo Guthrie You know the story. Every galaxy we look out at, with hardly any exceptions, appears to be moving away from us. Not only that, but the farther away a galaxy appears to be, the faster it appears to move away from us! What do we…

The New Age? It's just the old age stuck in a microwave oven for fifteen seconds. -James Randi About two weeks ago, the WMAP (Wilkinson Microwave Anisotropy Probe) team released their seven-year results, and I'm finally ready to tell you all about it. WMAP, remember, is this guy. By looking at two…
Advertisment