Battle of the Beards: Darwin vs. Kelvin

How old is the Solar System? We know now, from a variety of astronomical, geological and solar evidence that we're looking at about 4.5 billion years. But in the 19th century, there was a huge problem. Here's why. 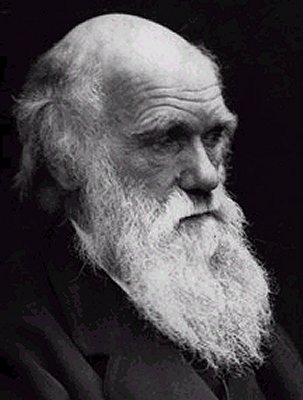 Charles Darwin had discovered not only that organisms evolve, but had determined the mechanism of natural selection. His voyage on the HMS Beagle had allow him to make the observations necessary to confirm the validity of his theory and its mechanism.

A little bit about geology and the age of the Earth was known, and Darwin used that to his advantage. He reasoned that, in order for organisms to evolve to the point they are today based on the observed rate of change, the Earth needed to be at least many hundreds of millions of years old. This reasoning was sound, the biology was sound, and the geology was sound.

"At least hundreds of millions of years" even fits in very well with our modern view of the Earth and the Solar System, which shows about 5-600 million years from the Cambrian explosion to the present day. So, as long as the Earth is at least that old, there's enough time -- at least in principle -- for evolution to take us from simple organisms to the present day. 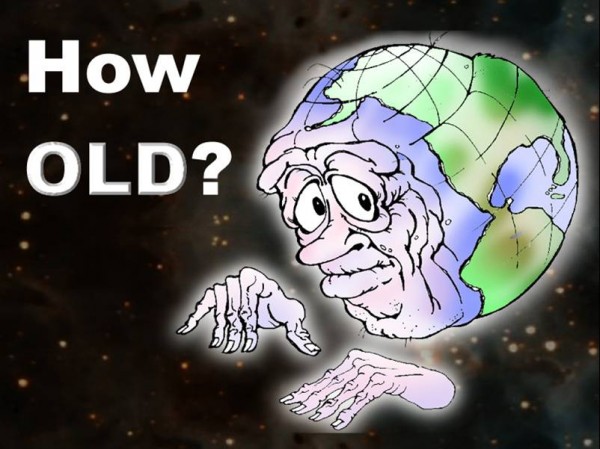 But, there was a problem. How could the Earth be hundreds of millions of years old, and how could evolution take place on it over that time, unless the Sun was that old, too? 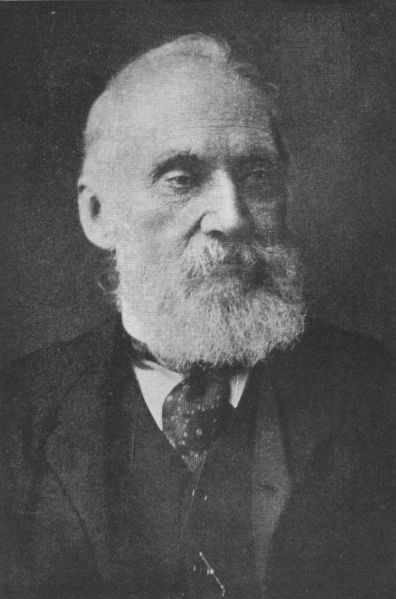 Well, enter Lord Kelvin, a.k.a. William Thomson. One of the most respected physicists of the day, Thomson decided to calculate how old the Sun was. How did he do it? Well, he knew the following three things:

Based on how big the Sun was, he figured out the rate it must be contracting to emit the amount of energy it was giving off, and found that the upper limit for the age of the Sun was 20-40 million years.

But both Darwin and Thomson couldn't be right! You can't have many hundreds of millions of years of evolution if the Sun is only a few tens of millions of years old! Thomson knew about gravitational energy, electromagnetic energy, and chemical energy, and calculated that, even if the Sun made use of all three, gravity gave the oldest age, and the age was far too short. He challenged Darwin and his followers to resolve the problem, and of course they could not.

But the Sun really is much older than that. What's its secret? 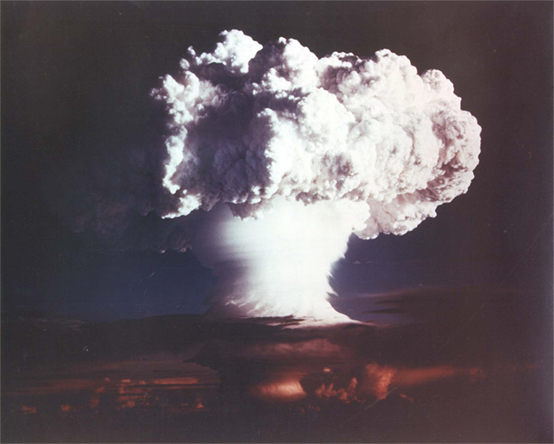 Yes, Ivy Mike, it's nuclear fusion! More powerful than gravity, electromagnetism or chemical energy, nuclear fusion converts hydrogen nuclei into heavier elements, emitting tremendous amounts of energy in the process. This is what drives most stars, allowing them to burn as brightly as they do for billions and billions of years.

But Thomson was entirely right in his calculations. It turns out that there are stars that don't undergo nuclear fusion, that simply gravitationally collapse and emit light as a result. These stars are called white dwarfs, and they also shine for billions of years, but are much, much dimmer than our Sun or any other fusion-driven star we've ever found. Take a look at Sirius A (the bright, fusion-driven star) and B (the tiny, dim white dwarf) below. 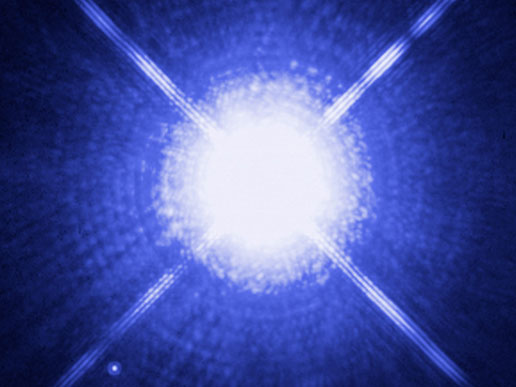 And that secret -- that of the atomic nucleus -- is the solution to this battle of the beards. Now, the only question that remains is whose beard is better? I leave that debate to you.

I never knew that some stars weren't fusion driven. Kewl!

Well, it seems quite obvious that the fuller, more untamed mandibular mane of Darwin suits a Naturalist of his stature and dedication. The wildness of nature and its refusal to be neatly placed in any single "box" is belied by the impetuous and vivacious nature of the Darwinian kera-chin.

Lord Kelvin, however sports a more tightly trimmed and squarish coiffure del visage. A perfect fit for a man who sought to find the limits of existence and the edges of reality. Of course, the rigidly defined existence of Kelvin's face plumage is quite unruly below the surface, with wild undulating folicle flagella and microscopic structural indosyncracies - the whole of physics in a beard!

I don't think the two can be compared in any competetive manner. To favor one would be to give greater value to one side of a coin than the other. This is a hairy, hoary wealth that always enriches us all with "tales" for our "heads!"

It's ironic that the man who extended classical mechanics to the thermodynamic realm was opposed to extending it to the biological realm. The fact is that both Darwin and Kelvin were heirs of Newton, the theist.

Kelvin remains one of the scientific greats, but it is said that he couldn't actually admit publically that radioactivity showed his calculations (with respect to the earth's cooling--and radioactivity raised the possibility of other energy sources in the sun) to be wrong. Which is sad, if perhaps not surprising, in a scientist. He has the better beard, though, in my opinion.

The mere fact that evolution passed this test means nothing to the IDiots, however. They think that the fact that they can accommodate evolution's timeline and specific characteristics (constraints via heredity and the limited nature of mutations) by simply predicting nothing (except "complexity," though it's hardly entailed by ID), is good enough for them. But that's why it's religious apologetics, and not science at all.

I think I prefer looking to neutron stars, especially pulsars, as stars powered by graviation, since they really produce a great deal of gravitational energy when they have a source of matter. And although "nuclear fusion! More powerful than gravity, electromagnetism or chemical energy..." is true enough (the strong nuclear force is the strongest force), a lot more energy per kilogram is released in the neutron star's gravity well than is produced during fusion, from hydrogen all the way down to iron.

Black holes are likewise powerful releasers of gravitational energy, although any that we see has to come from the accretion disk around the black hole, not from the "black hole itself."

Whose beard is better? I'll have to get back to you after I see them both eat some delicious lasagna and cake, with a soup appetizer.

I've got to go with Darwin's beard because it somewhat reminds me of Einstein's hair.

I had the idea that Lord Kelvin had based his 20 to 30 million age of the Earth on the length of time the Earth would cool to its present temperature, but wasn't able to take into account the warming effect of natural radioactivity in the Earth's core (because it hadn't yet been discovered).

That's not true. There's a book by Joe Burchfield called "Lord Kelvin and the Age of the Earth" where they go through his argument in detail. Kelvin knew that the Earth's heating and cooling is primarily due to the Sun, and he was right.

I call BS. I have not read the book, but, if you go to Amazon, and look at the table of contents, you get "Kelvin overthrown: Radioactive heating" page 166.

The missing part of the equation is radioactive heating of the earths core, not the incident sunlight.

I have read Wayne's explanation in many sources and I think Wayne is right.

Is that responsible for the ambient temperature at the surface of the Earth? Or is the Sun? Gimme a break: you know it's the Sun. Don't believe me? Go outside at the South Pole during the middle of their "winter".

Rutherford was about to give a speech on radioactivity in which he
disagreed with Lord Kelvin's estimates of the age of the earth when
he realized Kelvin was in the audience. "Iâ¦ realized I was in
for trouble at the last part of the speechâ¦ Then a sudden
inspiration came and I said Lord Kelvin had limited the age of the
earth, PROVIDED NO NEW SOURCE OF HEAT WAS DISCOVERED." That
prophetic utterance refers to what we are now considering tonight,
radium! The old boy beamed upon me." Rutherford concluded his
speech, before the Royal Society, withâ¦ "The discovery of the
radio-active elements, in which their disintegration liberate
enormous amounts of energy, thus increases the possible limit of
the duration of life on this planet, and allows the time claimed by
the geologist and biologist for the process of evolution."

Lord Kelvin never published any acknowledgment that radioactivity
was supplying heat to the earth's crust and that thus his
calculations of the age of the earth were not accurate.
J.J. Thompson, related in his own memoirs that "in private
conversation Kelvin did concede that his theories had been
overthrown".

It seems that Rutherford considered Kelvin to have non-verbally communicated approval of his statements on radioactivity. But he appears not to have wanted to publicly acknowledge that his calculations had been superseded.