Remember them this Memorial Day!

It's Memorial Day weekend, and I won't be blogging over it, as I'm going to be enjoying my long weekend! (And I hope you are, too.) But I'd like to leave you with some reflections on our history of Space Exploration in this country. (This was originally posted last year.)

There are wonderful things going on in Space Exploration these days, and we know an unprecedented amount about our planet, solar system, galaxy, and Universe as a result of all the exploration that we've done. In fact, that's most of what I write about here. But another huge part of that exploration has been manned spaceflight, and we've learned a tremendous amount about ourselves and how we both relate to and depend on this world as a result of that. 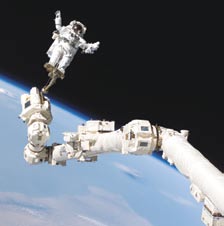 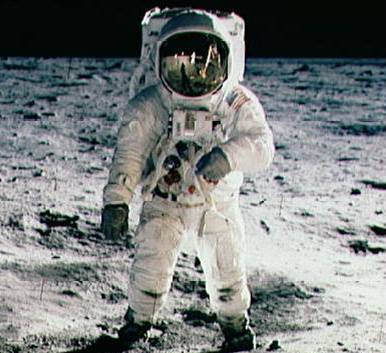 But there's been a cost, too. Being a NASA astronaut is dangerous, and there have been a number of accidents and crashes that have claimed the lives of NASA astronauts. (Not to mention the losses suffered by other space explorers.) Today, I'd like to remember some of the men and women who perished in these disasters.

This picture below is that of a T-38 Talon aircraft. 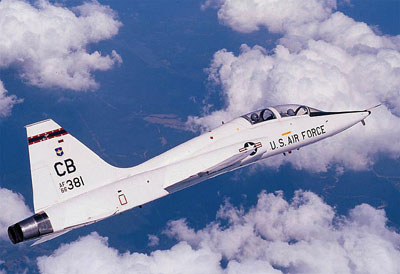 This was the world's first supersonic jet trainer. It's been in use by the military for nearly 50 years training pilots; it's also the cheapest supersonic aircraft at only $756,000. There have been a number of fatal accidents involving this aircraft, including the following NASA astronauts and astronaut trainees:

After the death of Clifton Williams, there were no training-related fatalities for nearly 20 years. However, there have been others who have been killed in aircraft accidents, including:

There are, of course, three much more famous NASA disasters that claimed the lives of many astronauts, and we should not forget those men and women, either. 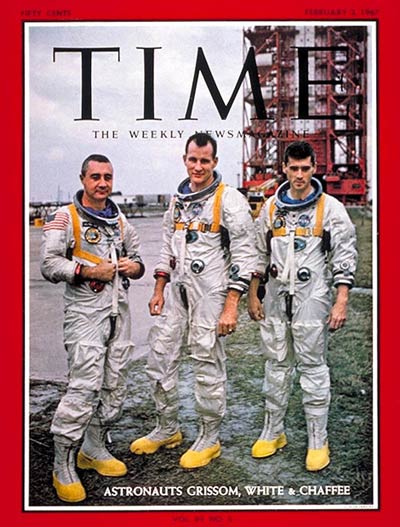 On January 27, 1967, the American space program was preparing for the Apollo missions. In a training exercise for the Apollo 1 mission, astronauts Virgil "Gus" Grissom (Gemini 3), Ed White (Gemini 4), and Roger Chaffee (Mercury 4) were locked inside the module on the launch pad when a flash fire broke out inside the spacecraft. Unable to open the locks and escape in time, the three of them were burned alive. The Apollo program's command module underwent a massive redesign after that, and there were no manned missions until Apollo 7 in October of 1968 (ironically, manned by the backup crew to Grissom, White, and Chaffee). 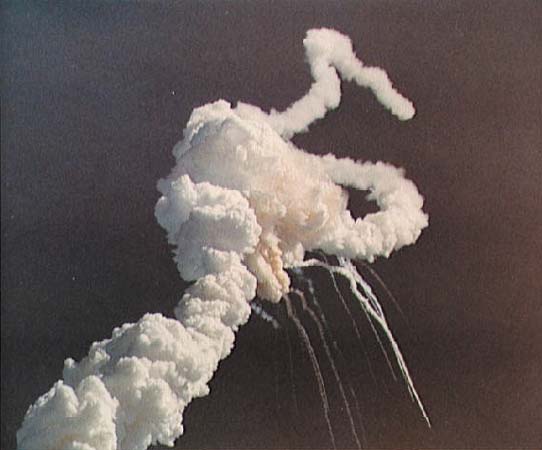 January 28, 1986. Do you remember where you were? I was in second grade. I remember how excited my teacher was (hi, Mrs. Goldring!) that a teacher, Christa McAuliffe, was going into space. And we all got to watch it on TV. It was an exciting moment. And then we started watching it, and I remember noticing the flames seeming to climb up the spacecraft, and I said something about it. (I always was a caller-outer.) 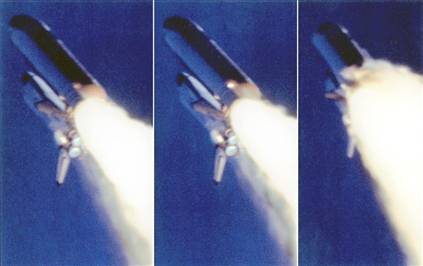 And as she was explaining that everything was normal, the shuttle exploded. We were all horrified. Everyone across the nation was horrified when they found out. We all know about the O-ring problem in the solid rocket boosters, but take some time today to remember the seven astronauts who lost their lives in this disaster. Remember, they didn't die in that explosion, it most likely wasn't until they hit the water beneath them that the impact killed them; another horrible way to die. 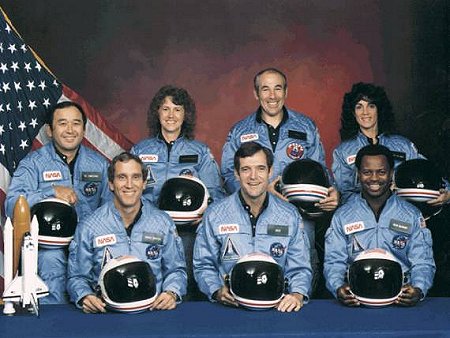 And finally, there's the Space Shuttle Columbia disaster, which burned up on re-entry. 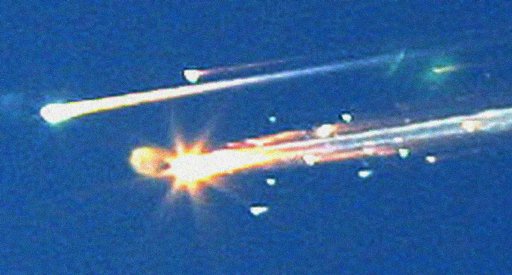 A piece of foam insulation (nerf-like material) had broken off and struck the left wing well prior to re-entry. Although extremely light, the material was moving very quickly, and tests have shown that it most likely caused significant damage to the shuttle. The spacecraft began to disintegrate upon re-entry with the atmosphere, and it is unknown what the cause of death of the crew members was; whether they suffocated due to a lack of atmosphere or froze to death in the very high altitudes. At the time of the breakup, the shuttle was at an altitude of 203,000 feet (39 miles or 63 km), and was moving at about Mach 18 (13,000 mph or 20,000 km/hr). 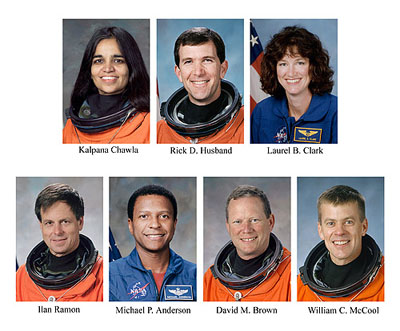 Space exploration is a wonderful research and development tool for humanity, and in a very literal way, has us reaching for the stars. But remember that in addition to its financial costs, there's a very human cost as well. I'll leave you with the words of the poet John Gillespie Magee, Jr., used by President Reagan to eulogize the Challenger crew:

We will never forget them, nor the last time we saw them, this morning, as they prepared for their journey and waved goodbye and 'slipped the surly bonds of Earth' to 'touch the face of God.'

"We will never forget them, nor the last time we saw them, this morning, as they prepared for their journey and waved goodbye and 'slipped the surly bonds of Earth' to 'touch the face of God.'" -John Gillespie Magee, Jr.; spoken by Ronald Reagan after the Challenger tragedy Twenty-five years ago…

"I tell you, we are here on Earth to fart around, and don't let anybody tell you different." -Kurt Vonnegut Kurt Vonnegut may have it right for most of us, but not all of us spend all of our time on Earth. A select dozen of us, in fact, have made it, as Cat Power would sing, to The Moon. Image…

"Each generation goes further than the generation preceding it because it stands on the shoulders of that generation. You will have opportunities beyond anything we've ever known." -Ronald Reagan Earlier today, Sally Ride, the first American woman ever to fly in outer space, passed away at the age…

I always get a bit anxious around my birthday (27 Jan):

The Columbia crew were probably killed by blunt force trauma as the orbiter broke up. Details at http://caib.nasa.gov/. This information on the fate of the crew was finally released only a few months ago.

Roger Chaffee wasn't a Mercury astronaut; he was a spaceflight rookie.

The link to the T-38 Talon page is slightly wrong - I think it's been moved to http://www.af.mil/information/factsheets/factsheet.asp?id=126.

And it's not at all surprising that the Apollo 1 backup crew made the next flight... that's what they're FOR!

, it most likely wasn't until they hit the water beneath them that the impact killed them

I didn't know that.

No, I have no recollection of where I was that day (and I keep forgetting it was 1986 - that year makes me think Chernobyl instead - even if I don't recall that day, either).

It's nothing personal - I don't recall the fall of the Wall either. And 11. September is pretty much a coÃ¯ncidence.

But my thanks to those who gave up everything so that we might learn more.

I was a hotshot Wall Street executive. Closed my door and wept quietly for two hours while writing some dreadful computer program.

I'm still mad that we've spent so much time in low orbit. I've gotten old since watching men walk on the moon when I was young.

For what it's worth, it's almost certain that the Challenger astronauts were unconscious before they hit the water due to lack of oxygen at the 48,000-foot level where the explosion happened.

For what it's worth, it's almost certain that the Challenger astronauts were unconscious before they hit the water due to lack of oxygen at the 48,000-foot level where the explosion happened.

Three of the Challenger crew had their aux O2 supplies activated, and that's a manual operation.

I always get goose-bumps when I hear the phrase "go at throttle-up".

how come both space shuttle EXPLOSIONS happened under Republican presidents? it seems like to much a coincidence to me, and mamy other people. very LARGE explosions, like Challenger and Columbia are very, very EXCITING. the Challenger astronauts fed the fish, of course. the Columbia astronauts? they fed the cows, and the horses, and the dogs, and the cats, and all other animals in the GARBAGE trail left behind when Columbia EXPLODED! one person once asked me, sensing my glee at those EXPLOSIONS, wondered if the extra cash outlay bothered me? why no, it did not, i told them.... i just loved watching the VERY VERY VERY BIG EXPLOSIONS. it was well worth the money, I told them, very POINTEDLY!
NASA? = NEED ANOTHER SEVEN ASTRONAUTS, OF COURSE!
BWAHAHAHAHAHAHAHAHAHAHAHAHAHA!!!!!

I ALSO GET ALL GOOSEBUMPLY WHEN I HEAR THAT 'TROTTLE UP' COMMAND MYSELF. IT MEANS I WON'T HAVE TO WAIT LONG, TO SEE A VERY VERY VERY GOOD EXPLOSION! BWAHAHAHAHAHAHAHAHAHAHA!!!

For what it's worth, it's almost certain that the Challenger astronauts were unconscious before they hit the water due to lack of oxygen at the 48,000-foot level where the explosion happened. Christian Louboutin

this is retarded it sucks eggs on fire

Talk about a complete waste of taxpayer dollars. Abolish the space program and we won't have to worry about innocent lives being lost for no reason.

I want to sent moon my daudhter or son . now they are very lettle. Pless my child.

ohhhhhhhh what a bad news for indian astronet kalpana