How to Fake your own Moon Landing

Okay, so you've seen the famous photos from the Apollo Moon landings: 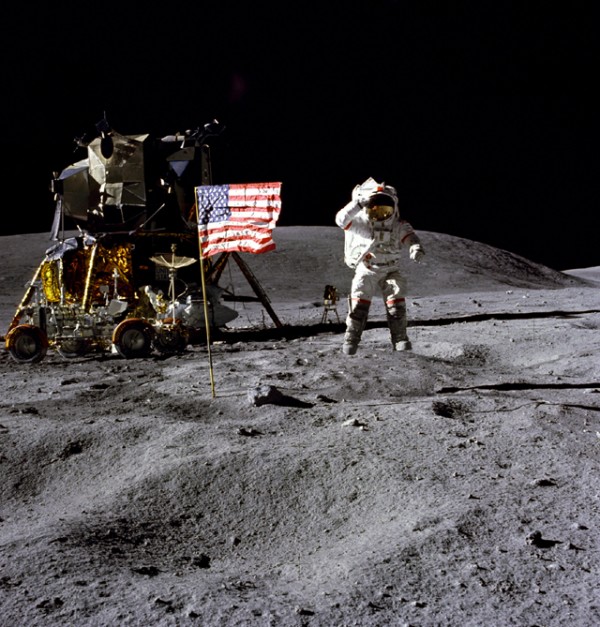 And you've been around the block enough to know why we really landed on the Moon. But let's say you wanted, for some reason, to stage your own fake jaunt on the Moon.

The band Rammstein did an excellent job with the first 30 seconds of their video, Amerika:

So how do you do it? Well, first off, you need some nice, Moon-colored dirt. You've got two options here. One is to go someplace where you can see something like Craters of the Moon national monument in Idaho. After all, this will do nicely for an area to film: 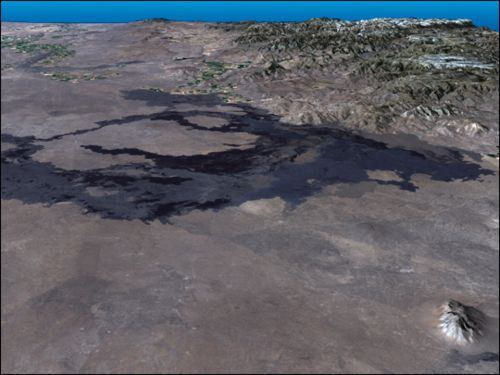 But really, not everyone has access to something like that. A dry, treeless, grassless area will be fine as well, as long as you either spray-paint it a dull grey color or, as is my preference, wait until the cover of night and illuminate everything with a low-pressure sodium lamp. Why? Because you get a picture that's monochromatic, like this: 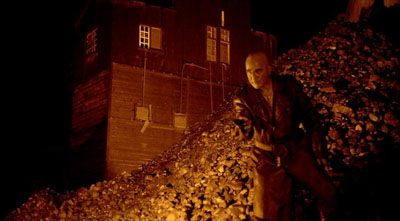 You can easily adjust the color on these pictures to turn the yellow into white/grey, and you've got yourself (roughly) a Moon.

You've then got some options as to the background. A black screen is low-cost, but probably not ideal. A green screen works better (just set up blackness and/or a further Moonscape, as you like), or, if your budget allows, actually do it at night with an artificial light source. My bet would be the green screen converted into either blackness (easiest): 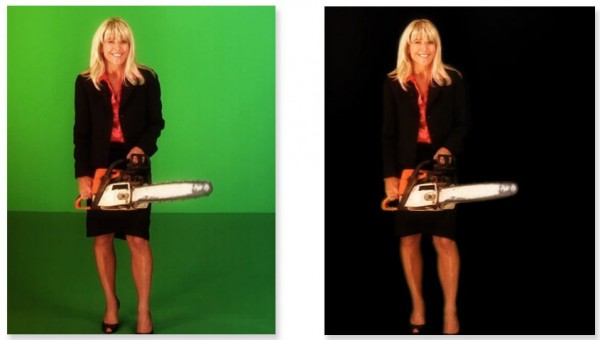 Or to green screen it and then add your favorite moonscape photo, like this one of Harrison Schmitt from Apollo 17: 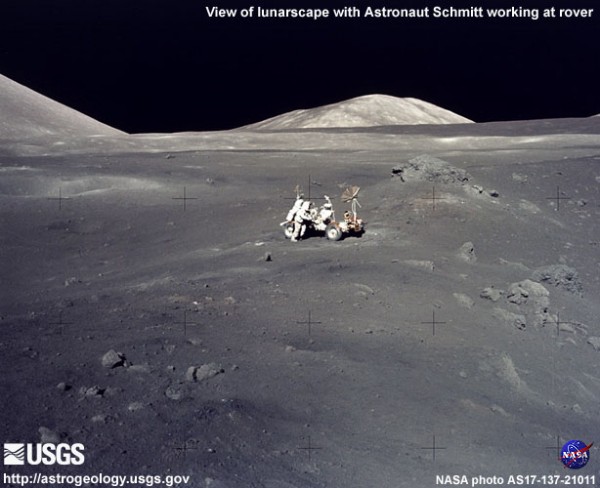 Then, you've got to get yourself a nice fake astronaut costume. Some of them are actually pretty good looking!

And finally, now that you've got everything, you're ready to start filming. This is where a neat little physics trick comes in handy. Gravity on Earth accelerates you (and everything else) at 9.8 meters/second^2 (32 ft/sec^2). On the Moon, on the other hand, gravity is only one sixth of Earth's gravity. This means the Moon's gravity only accelerates you at 1.6 meters/second^2 (5.3 ft/sec^2). So all you have to do is use a high speed camera to record at 180 (144) frames-per-second, then play it back at the standard 30 (24) frames-per-second, and you've got a slow-motion, Moon-esque video:

Compare that jump to a jump by an actual Apollo astronaut on the Moon (and note how they move differently than on Earth): Not bad! If you want to do like Rammstein and add yourself singing/playing an instrument, the next step is to record your audio at normal speed. Then, play it back at 6x speed, and lip-sync to the sped-up version as you film yourself. And you're all set!

A lot easier and cheaper than physically going to the Moon, to be sure. And that's how you do it.

Could you really hit a golf ball miles and miles on the Moon?

Mission control: You need to bend your knees a little more. Keep your head down. Alan Shepard: I'm... wearing a space suit. Mission control: Just trying to help. Apollo 14, the third crew ever to land on the Moon, pulled one of the most iconic stunts of all time. Along with Stuart Roosa (left) and…

How to make the Slowest Slow-Motion Video Ever!

"Everything that slows us down and forces patience, everything that sets us back into the slow circles of nature, is a help." -May Sarton It's unbelievable how much more amazing the world becomes in slow-motion. You've probably seen some high speed cameras that shoot at astounding frame rates, such…

Acceleration of a jump on the moon

Yesterday, I uploaded a post from my old site about slowing down time to make videos look like they were on the moon. If you haven't read that, the short story is that it doesn't look right when speed Apollo videos up so that the acceleration is -9.8 m/s2. What started that whole thing was an even…

A Quick Look Back Home, and Thanks

"You develop an instant global consciousness, a people orientation, an intense dissatisfaction with the state of the world, and a compulsion to do something about it. From out there on the Moon, international politics looks so petty. You want to grab a politician by the scruff of the neck and drag…

A great celebration for the 40th moon landing anniversary is coming! Canât wait to watch this program

Dang it, I've had that Rammstein song stuck in my head ever since you posted.

Astronaut is great, I admire

If there is any doubt that man landed on the moon three times, starting on July 20, 1969, than the believers are
obligated to produce proof that the doubters are mistaken.