Weekend Diversion: The Power of Periphery

It's time for an easy weekend for everyone. To kick it off, here's a song that almost everyone knows of, by the Eagles. Only, the Eagles didn't write it. Jackson Browne was screwing around in his flat with this song that "wasn't quite done" according to him. He played it for Glen Frey, and was stumped after the line "standin' on a corner in Winslow, Arizona, such a fine sight to see." The Eagles' contribution to the song was:

in a flatbed Ford

slowin' down to have a look at me.

That's right; Take it Easy is a Jackson Browne song. (And, incidentally, Winslow, Arizona was chosen because it's the worst place they could imagine being stuck. Perhaps not knowing this, Winslow erected a statue commemorating this song.) This is his version, and -- although I like the Eagles -- Jackson Browne's version is far superior to me. Hope you enjoy the listen, too! (Note: the player I use is down, so you can click here to listen if the embedding is broken.)

What to do to amuse yourself while you're listening? Take a look at this optical illusion (and click here for the full-size version): 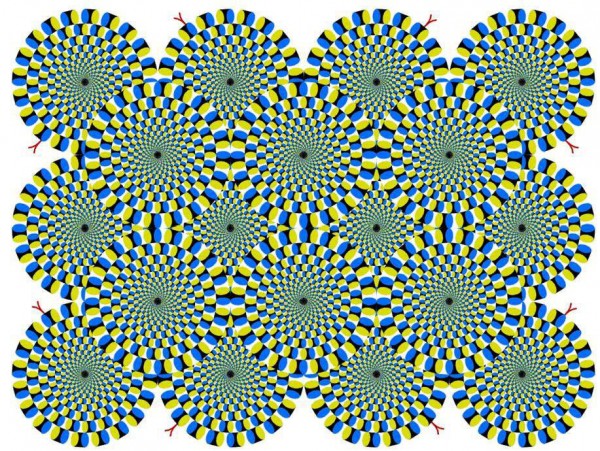 You'll notice that whatever circle you look at stays stationary, but the ones in your periphery seem to rotate!

Your peripheral vision, whose drawbacks can be seen via this illusion, is actually superior for visual astronomy than your normal sight. Seriously! The next time you've got a clear night and you're staring at the sky: 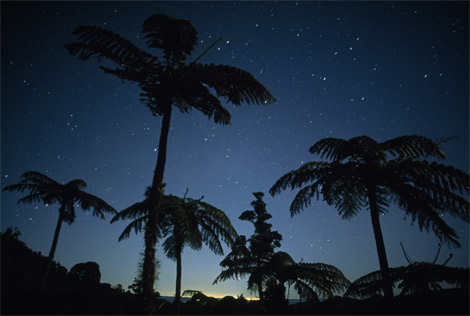 Look for the dimmest star that's still visible to you. Look at it in your peripheral vision. (In other words, look about 5-10 degrees away from the star, but be aware of where it is out of the corner of your eye.) It becomes easier to see in your periphery. Now look directly at it; you might see it disappear! This happens to me a lot more easily than my wife (who has perfect vision, and I don't), but it ought to happen to everyone. Take a look the next time you have the opportunity; this is one more neat thing your body can do!

I think your "full size" version has been through too many JPEG recompressions - not only is it a bit artifacty, but it has a larger filesize than the original version, found here along with many other motion illusion images (which may cause adverse reactions in sensitive viewers; caution is advised).

One of my favorite stories that Carl Sagan told was about peripheral vision. (This took place well before he was famous.) He was at a university, working at night, when the phone rang. He answered, and an inebriated voice said: "Lemme talk to a shtronomer." Sagan replied, "May I help you?" The man said, "Yeah there's this thing moving across the sky, but it's only there when you look sideways, an' when you look right at it it disappears." Sagan happened to know that there was a comet currently in the northern hemisphere, and that it would be just at the edge of human visibility, so he told the man that he was almost certainly looking at a comet. "Whassa comet?" the man replied after a short pause. "A comet," Sagan said, "is a dirty snowball about a mile in diameter." There was a long pause. "Lemme talk to a real shtronomer."

In amateur astronomy we call this technique "Averted Vision". It is used to observe very faint objects, and does take some practice. Unfortunately the random member of the public does not get it quickly enough so we learned not to show faint fuzzies on public nights. My wife never got it. Nor the lure of "little white blobs". Oh well.

So the week after next I'm off for a week of stargazing from a wilderness site up in the mountains. 700 people and porta-potties. She is not coming with me.

The spinning wheels is one of my favorite illusions. :)

I never got the peripheral vision thing; all the amateur astronomers around me act like they see something special but I just can't see it. If I divert my gaze a tiny amount, whatever is in my periphery disappears rather than becoming more obvious. Unfortunately I don't have perfect vision as a consolation for poor peripheral vision.

I discovered this by accident once, and I thought there was something wrong with my eyes. I was stargazing, and noticed the flashing lights of a distant jetliner out of the corner of my eye. It seemed very bright when it caught my attention, but when I looked directly at it - it seemed to almost disappear! I could barely see the flashes in my normal field of view, but in my peripheral vision it was amazingly bright by comparison. I asked my optometrist about it, he explained that this was normal and anecdotally told me how astronomers use this trick to see faint objects. It's such a cool phenomenon!!

I learned as a 6 year old kid in an area that had almost no electricity that to see at night you have to not look directly at the thing you are trying to see.

Modern living has dulled our senses, even as it has given us the tools to see so far beyond them.

hey, no one said *why* your peripheral vision is better.

i believe it is due to the optic nerve coming into the eye at the focus on the retina. consequently there are fewer rods and cones. this makes the eye less sensitive there as just a bit off center.

Rob @ no.7
It's actually due to the distribution of rods and cones in your eye. The cones are better for picking up detailed visual information, but are less sensitive to light than rods. The cones are also clustered around the focal point of the retina (the fovea), whereas the rods are more distributed around the retina. Because of this the core of your vision is better for seeing details in well lit areas, while the periphery is better able to detect faint objects in the dark.
The area where the optic nerve joins the retina is the blind spot, which is slightly off centre, and you can't see squat with that bit.

@Alex (8): thanks! i knew it was along those lines, but didn't remember the details.

I would like to make a painting inspired by the illusion image of the rotating snakes . How can I join the author of this image to ask his autorization ?