No, not you personally. But if you've ever thought about sending anything up into space, you may want to listen to this story about a couple of MIT students. For less than $150 in parts, with an amazing ease of assembly, they managed to send a device up to the brink of space, take some pictures, and recover the wreckage. At its apex, their entire apparatus reached an altitude of 93,000 feet (more than 28 km), sending it high into the stratosphere, high enough to take this picture: 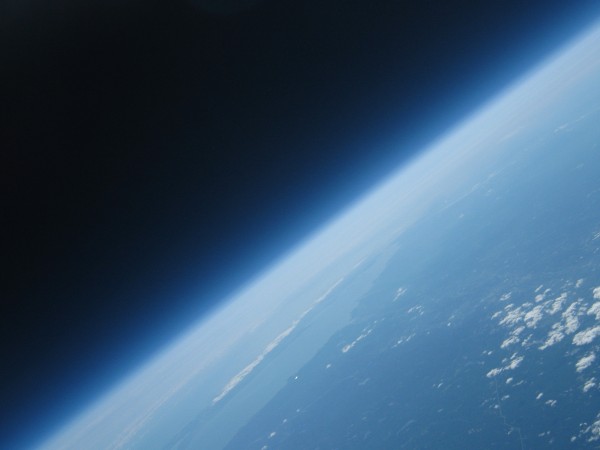 Well, it isn't technically "space", but it is above more than 90% of the atmosphere and is certainly very, very impressive. How did they do it? 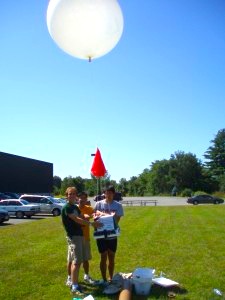 First off, they bought a weather balloon and filled it with helium. They attached a styrofoam beer cooler to the bottom of the balloon, and placed an inexpensive programmable digital camera inside of it, along with a cheap cellphone with GPS tracking. And that's really it, except for small things like hand-warmers (for the camera, not their hands), batteries, and a memory card. (You can read a little more of their story here.)

After going to the University of Wyoming's Balloon Trajectory Predictor, they drove out West (since the prevailing winds would blow it from West to East), launched the balloon (which they could do legally, since the entire apparatus -- minus the helium -- weighed less than four pounds), and drove back East, and waited. It took about 4 hours for the balloon to pop due to incredible differences in pressure, and another 40 minutes for it to free-fall down to the Earth. (Styrofoam has a pretty low terminal velocity, which is why it took so long.)

So at the end of all of this, they used the GPS tracker to find it, and after recovering it, decided to release some of the images. There's the maximum altitude one at the top of the page, but there's also this one, where you can clearly see the curvature of the Earth (and click for the large version): 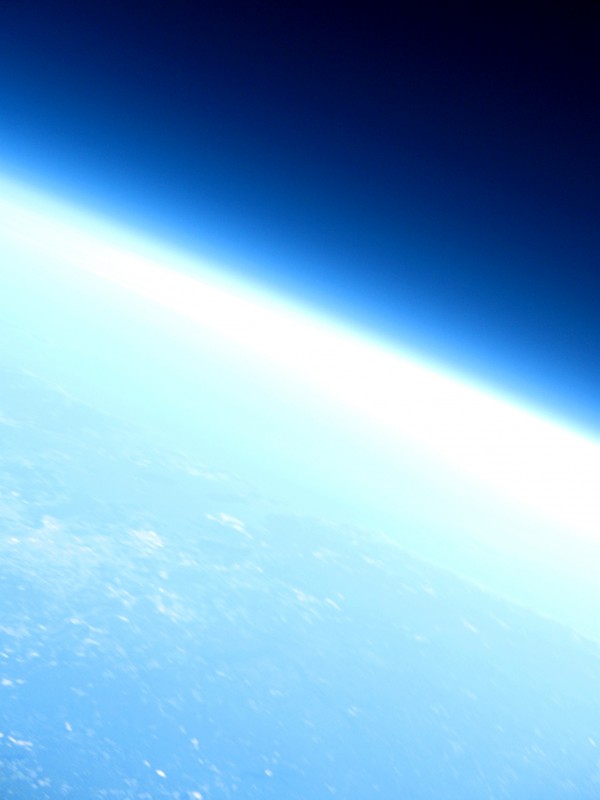 And this one, where you can see the popped balloon on the journey back to Earth. (And click for the large version.) 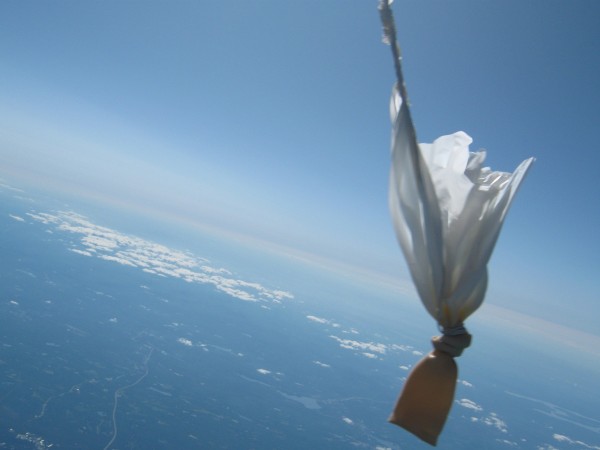 Total cost of supplies? $148, not including gas money and labor. I almost didn't believe it, so I checked their list of supplies needed, and here was what they used: 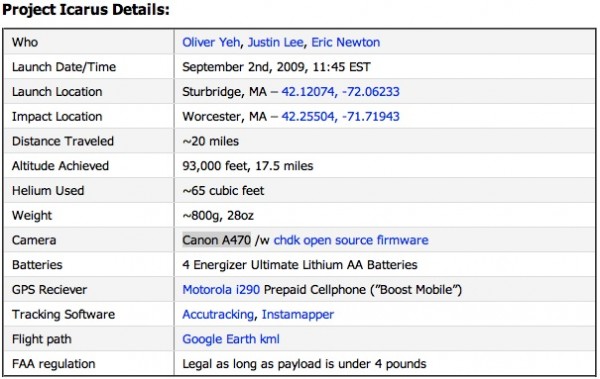 They're promising a step-by-step guide on their site at some point in the future, so that you, too, can do this. But how fantastic is this? Thanks to many of my readers for pointing this story out to me!

Pity - I'd like to see someone do this with a rocket as the initial payload.

These guys did it for around $350-500 back in 2007, their site is a little more detailed as to what they they used, temps and pressure measurements up there, r/c rotatable camera, etc.

I'm surprised that it traveled only 20 miles.

Uhhhhh.... That is nice but they aren't the first to do this. Nuts and Volts has had multiple articles on Near Space probes for the past year.

Nice hack... I may just have to do something similar.

John#3: Thanks for that link. Looks like they are using a gumstix to connect to the cel network and control everything, which gives a lot of flexibility. However, considering a modern digital camera and cell phone are both powerful embedded systems, it is pretty much redundant. Of course, it depends a bit on how hard it is to hack the camera and/or phone... the open source firmware (chdk) for cannon cameras looks like it makes it pretty easy. Lots of phones already have the ability to do GPS tracking.

Wow, that is neat. I really like those pictures too. Not bad at all for $150.

People have been doing this for a while, but it's always cool. Google around ("high altitude balloon camera" is a good search to start with) to find a bunch more.

ThatÂ´s so cool!
Now I want to be a memory card...

I wouldn't recommend doing that unless you really know the restrictions on airspace around you. Better still if you know the flight paths through your region as well. The 4lb limit isn't really meaningful; you can still fly stuff that'll do serious damage to aircraft.

@Sili: sure you can launch rockets. In the past some lucky amateur rocketry clubs have even been able to purchase decommissioned surface-surface missiles for that purpose. On the professional scene decommissioned missiles (well, the boosters) are even ganged to take small payloads into suborbital flight (as high as 100km). Balloons are far safer for the folks involved in the experiment though - and way cheaper too.

We are pretty amazed by this article. We actually haven't heard of this before.

We are just wondering if this "experiment" does not involve some risk or danger.??

It would be good to design a ballon with greater pressure resistance in order to achieve more hight, thus be able to take better pictures.

To what extent pressure affect to GPS or Camera..?

Does it matter from where the balloon is send..? Because some areas have greater wind velocity and wind directions might change up in the "space".