Professor Hubert Farnsworth: I'm sorry, Fry, but astronomers renamed Uranus in 2620 to end that stupid joke once and for all.

Professor Hubert Farnsworth: Urrectum. Here, let me locate it for you. 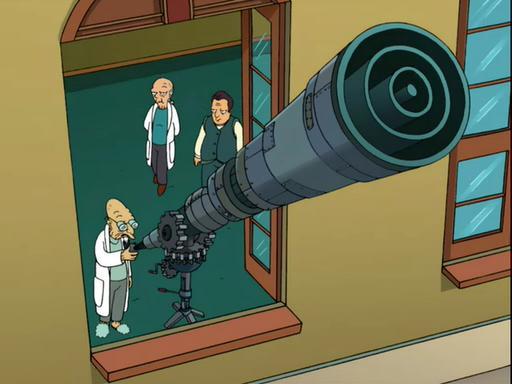 Why is it too bad? Because space is filled with many different types of atoms, including Carbon, Nitrogen, Oxygen, and Hydrogen: the elements essential to terrestrial life. In space, these sometimes appear in isolation, they sometimes appear in toxic combinations (like hydrogen cyanide), and they sometimes appear as simple organic molecules, like sugars, alcohols, and esters. (Amino acids may yet be there, but we haven't discovered them yet!)

But earlier this year, astronomers turned their telescopes towards the galactic center, and looked at the dust cloud Sagittarius B2, which looks like this. (And click it to enlarge.) 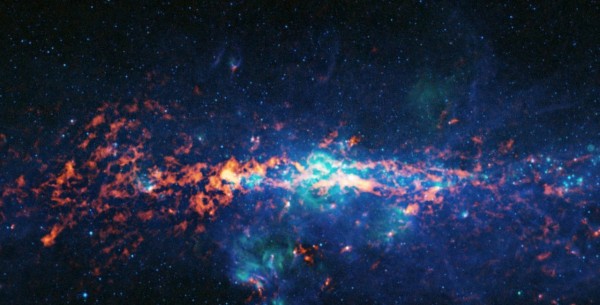 Sagittarius B2 is less than 400 light years from the galactic center. They found over 50 chemical compounds there, but one of the most interesting? Ethyl formate, which we typically form on Earth by reacting ethyl alcohol (the alcohol found in wine, beer, and liquor) with formic acid (which is commonly produced by ants and bees). The chemical compound is pretty simple, and looks like this: 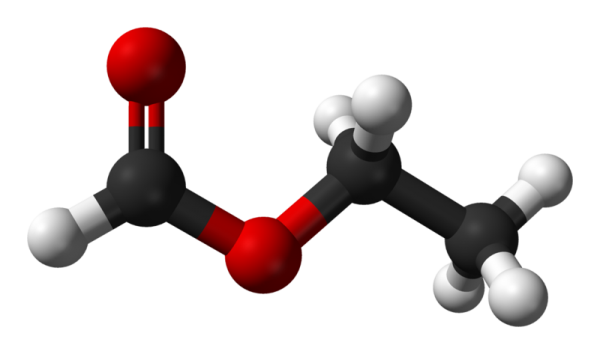 Yes, it's an organic molecule, but we produce these in space all the time. What's particularly interesting about Ethyl Formate? It's what gives Rum its smell, and give Raspberries their flavor! 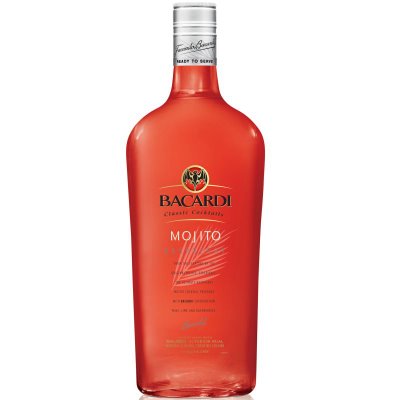 And that's at least, partially, what our galaxy smells like! Any Andromedans out there reading this? We smell like Raspberries and Rum! I have no idea what you smell like, but in comparison, I bet you stink compared to us! 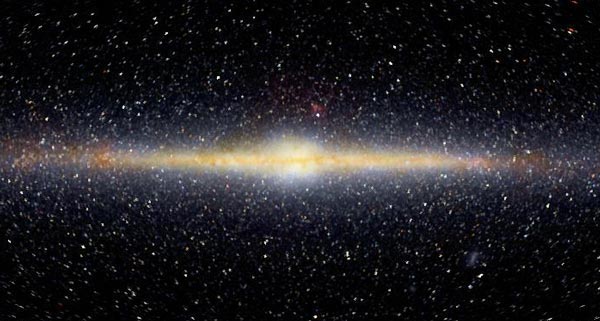 So the next time someone wonders what space smells like, you can not only tell them, you can tell them where to go to smell it!

Amusingly, from a molecular gastronomy point of view, that also means that rum and raspberries should go well together in cuisine! I suddenly have an urge to make cocktails...

There are more choices at http://www.astro.ucla.edu/~wright/DIRBE/

"Amino acids may yet be there, but we haven't discovered them yet!"

Glycine has been discovered in dust clouds in our galaxy

I'm afraid that's not quite correct. The detection of glycine was tentative and has thus far eluded verification.

At present, it's not certain whether the complexity of the glycine spectrum is to blame for the difficulty in its verification, or if some other molecular lines were mistakenly assigned to glycine.

...but that doesn't mean anyone's going to stop looking. ;)

I was recalling about the Glycine article while reading the post and linked it right away without any further search. But reading your links I see there's not such a strong proof of it.
Anyway, glycine is a very small and simple molecule and it shouldn't be dificult to find that kind of basic organic molecules as the forces and number of atoms involved in its synthesis are almost the same as in Ethyl Formate and others alike.

I think the flavoring for Moxie came from the Coal Sack in Cygnus.

Sure tastes that way.

And as we all know, the electron tastes like grape-aid!