But I want you to know something... you and me, it's not gonna be a one-way street. 'Cause I don't believe in one-way streets. Not between people, and not while I'm driving. So, here's some advice I wish I woulda got when I was your age: Live every week like it's Shark Week. -Tracy Jordan, 30 Rock

And, much like Tracy, the song for you this week is simple, sweet, and good-hearted. Enjoy an old classic, Just the Two of Us by Grover Washington, Jr., and Bill Withers.

Many of you have asked about whether there were any good science programs on television, and I have found one for you. Starting tomorrow night, it isn't Shark Week (sorry, Tracy). It's National Geographic's 2nd Annual Expedition Week. I've gotten an advance copy, and these are really interesting investigations into all sorts of natural and human phenomena. And yes, there's a great episode (with a lot of science) about Sharks. 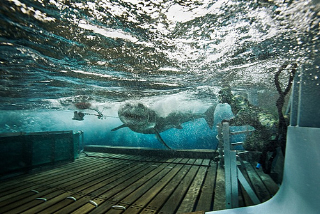 There's also an episode about Terraforming Mars, which is balanced and scientifically accurate, plus it has Robert Zubrin, whom I met back in 1999 and really respect his views on Mars exploration and colonization. 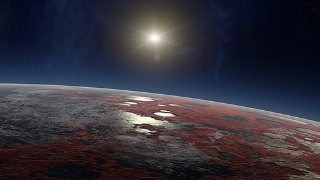 But the other episodes I've seen so far -- about the Amazonian Head-Shrinkers and the First Jesus -- have been fascinating, too.

The treatment of these subjects is entirely different from what I've come to expect from, say, the History Channel. The expeditions are riveting because the questions they're asking are riveting, and you get to journey along with the researchers, watching some of the science unfold as it unfolds. It gives me a tremendous appreciation for the level of specialization of knowledge in our society, as well as providing an accurate picture of scientific investigation.

It's something that's very rare on television these days, and I've found this to be an excellent program. So if you can watch it, enjoy it, and have a great weekend!

Starting tomorrow, National Geographic embarks upon a week of adventure. It's Nat Geo's Second Annual Expedition Week, seven nights of journeys to places as diverse as Mars and the deep ocean. Every night at 9PM, Nat Geo takes us on a different expedition sure to fascinate and amaze. I was lucky…

Missions to Mars and Nuclear Fusion

"You see, wire telegraph is a kind of a very, very long cat. You pull his tail in New York and his head is meowing in Los Angeles. Do you understand this? And radio operates exactly the same way: you send signals here, they receive them there. The only difference is that there is no cat." -Albert…

Weekend Diversion: A contest, an upgrade and a chance to see me LIVE!

"Art has never been a popularity contest." -James Levine Sometimes, you might feel like you've heard it all, seen it all, and that nothing's original anymore. But I beg to differ. Just because great things have come before doesn't mean that there aren't great things happening right now. While it…

I'm not so sure what to think about The First Jesus -- couldn't they have titled it something more like The First "Messiah" (NB: use of scare quotes)? It sounds interesting, but I'm curious whether it addressed any of the following issues.

There is no contemporary, non-Biblical evidence that the "Jesus of Nazareth" depicted in the Bible was an actual historical figure. There were, however, lots of guys named Jesus back then. If the show is about addressing evidence of a messianic figure named Simon, calling it "The First Jesus" makes very little sense, except of course to attract attention.

It doesn't seem particularly objective (not kosher, if you prefer) to imply Jesus = Messiah, even if the rest of the show goes on to undermine the mistaken idea that the New Testament narratives tell a unique story in history. For that matter, they could also address the fact that messianic traditions in other cultures, dating back hundreds or thousands of years B.C.E., also call into question whether this "Simon" was actually the first person to make such a claim for himself.

British documentaries on science and nature are much better than American ones I've found.

Two excellent BBC documentary series based on expeditions are Oceans and Lost Land of the Volcano.