On the 8th Day of Christmas, Hubble gave to me...

Have you been keeping up with The Boston Globe's Hubble Advent Calendar? Today's picture is totally worth talking about, and gives me a chance to tell you about these little guys that just hang-on to our galaxy: globular clusters. When you look out at a galaxy -- pretty much any galaxy -- you'll find these tiny clumps of light surrounding it. 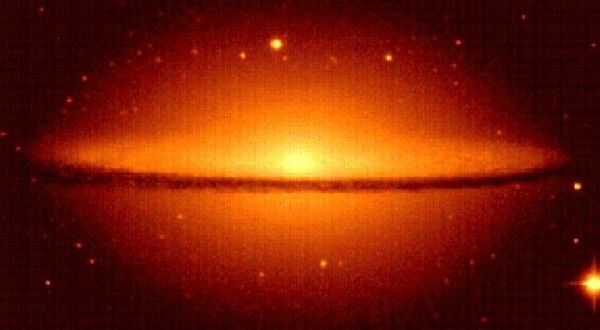 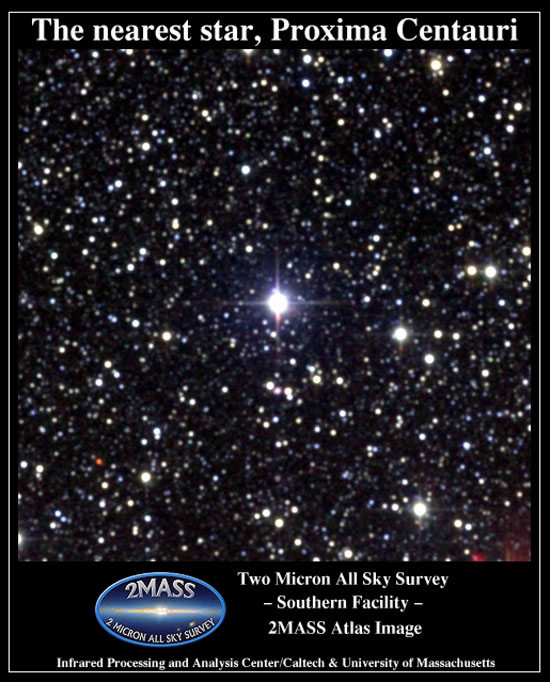 Globular clusters, on the other hand, must look at us and laugh. Imagine taking that same volume of space that -- around our Sun -- contains just one other star. Now, instead of filling it with just one star, fill it with around 100,000! Our galaxy has around 200 globular clusters in it, with some of the largest ones containing many millions of stars, despite having a physical size of only around 100 light years! (And for this and all subsequent images, click for the largest available version. Some of the images are large!) 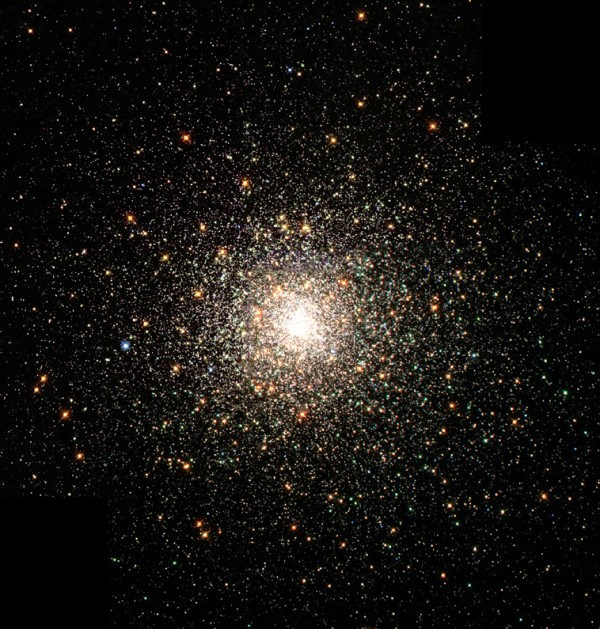 Well, this seems like the type of thing Hubble was built for! In 2002, we pointed Hubble at one of the largest globular clusters we know of, Omega Centauri, and instead of looking like this, which it does through a ground-based amateur telescope, 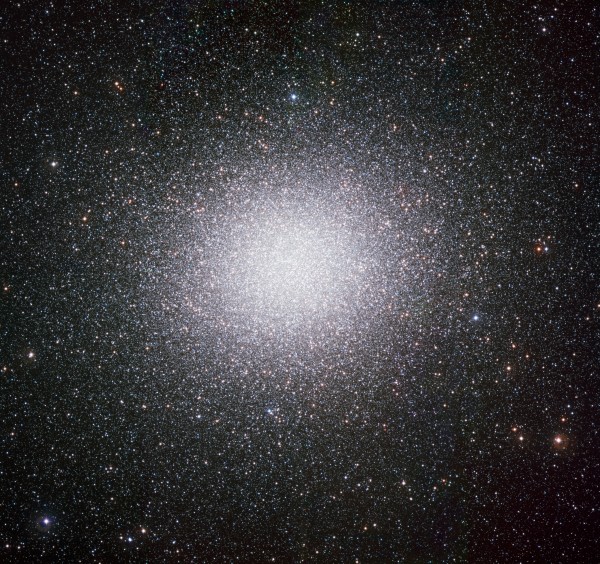 Hubble returned this picture, which you can see on the advent calendar. 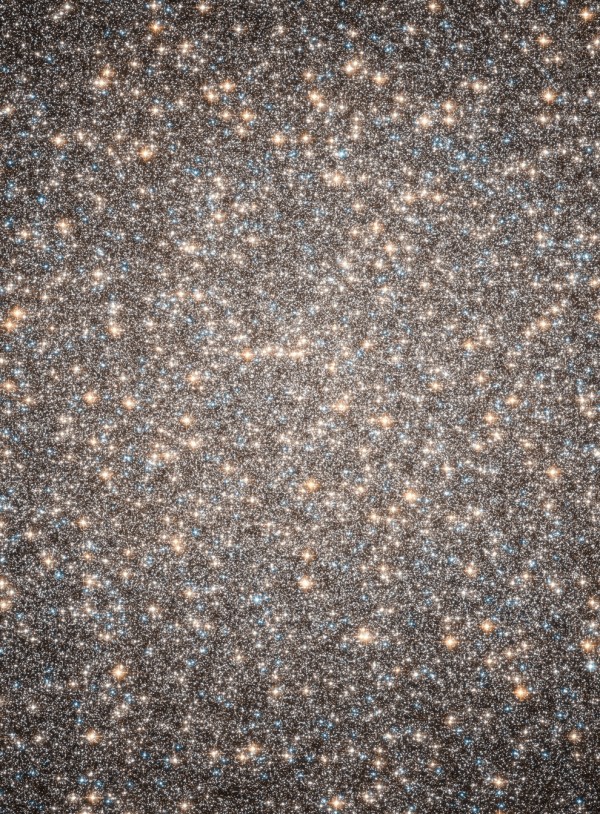 There are about 2 million stars in this image, which is less than 20% of all the stars in the globular cluster. Now, I could crop a small piece of this image to show you how impressive Hubble's telescope was in 2002; here you go!

But didn't they just upgrade their camera? What do you suppose we'd be able to see with the new camera if we took another look at Omega Centauri today? Maybe... something like this? 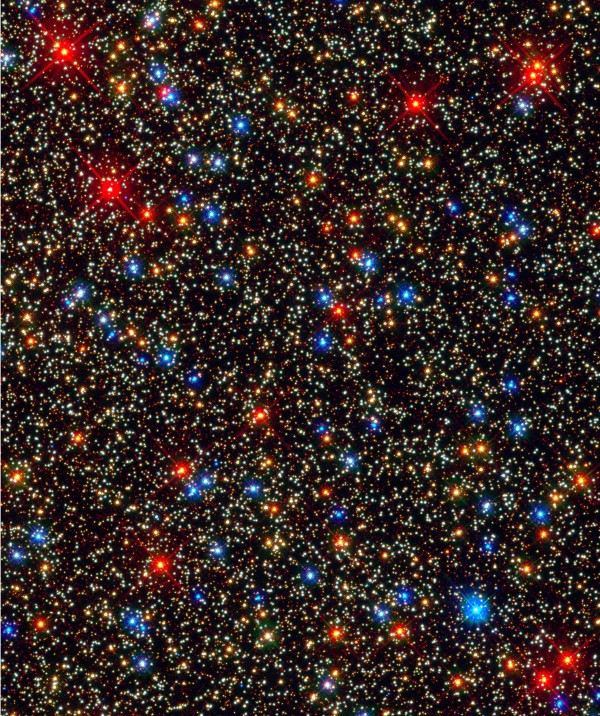 And if you zoomed in to the full-resolution version and pulled out what's really inside, at the highest resolution possible? 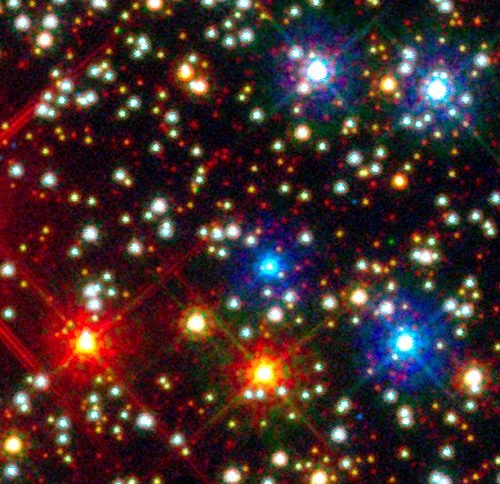 Well, if you're not impressed by what's in there, you need to check your pulse, because you're probably dead. For perspective, this cluster is 17,000 light years away, and the distance spanning this last entire image is less than two light years.

And that's worth celebrating at any time of the year.

Defeating Hubble, from the ground!

"The Earth's atmosphere is an imperfect window on the universe... atmospheric turbulence blurs the images of celestial objects, even when they are viewed through the most powerful ground-based telescopes." -John Bahcall There's no doubt that the Hubble Space Telescope has given us some of the most…

How The Universe Destroys Its "Death Stars"

"What's that star? It's the Death Star. What does it do? It does Death. It does Death, buddy. Get out of my way!" -Eddie Izzard Like it was for many people, the original, very first Star Wars movie was one of my favorites as a child. And while there was a lot to be in awe of, the idea of jetting…

“The Milky Way is nothing else but a mass of innumerable stars planted together in clusters.” -Galileo Galilei Welcome back to another Messier Monday here on Starts With a Bang! With 110 deep-sky objects making it up, the Messier Catalogue is the first comprehensive, accurate catalogue of faint (…

"Through space the universe encompasses and swallows me up like an atom; through thought I comprehend the world." -Blaise Pascal Whether you have or haven't seen the xkcd webcomic, height (or my old post referencing it), one of the things that I can't imagine not fascinating you is what you see the…

Yogi Berra: "It's so crowded, nobody goes there anymore."

By way of comparison, how many stars would be in a 4 ly sphere, or alternatively, what's the median shortest distance between nearest neighbor stars in the cluster?

also, are all the stars in the last photo part of the cluster (bright, dim, red, blue)? are they all the same age?

I am very curious - what would the night sky look like when viewed from a planet orbiting one of those stars? Would they even have much of a "night"?

I second the question concerning average distance between stars. Many of those stars must be orbiting one another. I wonder if periodically stars come closer together due to orbits, thus eliminating night for a certain amount of time. Days? months? years? Decades? What must that do to species development and survival? Fascinating stuff.

Hi Ethan... absolute novice when it comes to cosmology/astrophysics. Your blog has been beyond informative and I have learned so much. So I wanted to say thank you!!!

Secondly, I have a quick question. Would it be reasonable to assume that globular clusters like Omega Centauri have a higher probability of sustaining life, and more specifically, intelligent life with interplanetary travel due to the proximity of all these stars? (I guess these stars would have to be planets too... so third question... do starts always have planets orbiting them, or is there an estimate of how many stars have planets?)

My big question is - what makes these clusters stable and prevents them from collapsing into their own black hole. All these stars have to be interacting strongly.

I second the question by Mu: How do they stay spherical? As far as planets go, my hunch is that one within such a globular cluster would have to orbit very close to its star in order to have a stable orbit.

Brilliant pictures! The one labelled Proxima Centauri is a little misleading though. The bright central star is actually other two stars of the triple system, alpha and beta centauri, which are much brighter than the little red dwarf proxima centauri which would be one of the near invisible dots towards the bottom right of the shot.
One day the bright ones will be our closest stars as proxima orbits around the other side of the larger two.

That's the place to have your interstellar empire. Nothing's more than a hop, skip, and hyperjump away.

It's a good question what keeps these things from collapsing in on themselves, because they're supposed to be hella old. I don't think anybody knows. Astronomers don't like to mention things they don't have any idea about. That's one way they differ from biologists, who are generally eager to call your attention to myriad unanswered questions.

"That's the place to have your interstellar empire. Nothing's more than a hop, skip, and hyperjump away."

That was just what I was thinking. An archipelago of stars!

And look at us, isolated out here in the middle of nowhere, light years from the nearest gas station. Literally!

Totally awesome what Hubble sends back.
When they are finished with Hubble, they should haul it back to earth to put in a special museum.

@7 This happens to be the topic of my Honours Thesis.

He said: "I felt I'd test my hypothesis and I did that by getting my cat certified by a number of the most prominent lay hypnosis organisations in the United States. It was a frighteningly simple process.

I love to look at star clusters through my home telescope, they are endlessly fascinating and they are EVERYWHERE (I include open clusters in my viewing, not being the prejudiced sort)...I love the hubble views of thee, but there is something very satisfying about looking at them in your back yard on a dark, moonless night...... GO Hubble!!! Thanks Ethan, your insight and perspective is always refreshing!!

Real, fake, reworked, I don't mind. Those pictures are wonderful and worth spending more than five minutes on this blog!
I really enjoyed looking the pics and reading your text!
Definitely 5 stars rating for your blog!

my guess is that a globular cluster is the last place you would find any sort of life. the high density of stars suggests a high incidence of novas, which would pretty much fry any life in the cluster. unless they are super intelligent cockroaches or something...

Come on, Ethan, we need a post dedicated to irresponsible rumormongering about whether CDMS has discovered dark matter.

Joe, I've never been one for rumors or speculation about what may or may not come -- that's just sensationalism to me. Without any need for that, the Universe is plenty sensational to me.

I'd rather talk about what we know and how we know it; that said, I'll be happy to lay out CDMS' latest news (and what it means) once they actually reveal it.

Watching TV and see the electronic space or rather the space in the brain have the same proportions....dots dots dots