You knew just what I was there for

You heard me saying a prayer for

Someone I really could care for... -Richard Rodgers & Lorenz Hart

Tonight is the last night of 2009, there's a full Moon, there's a sliver of a partial lunar eclipse, and it's the second full Moon this month. 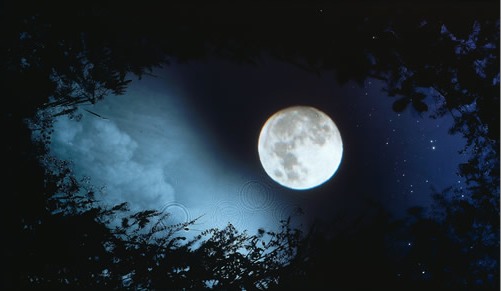 Q: Does having two full Moons in a month make it a Blue Moon?

A: In our modern times, yes, that's what we use that colloquialism to mean. The phrase "Blue Moon" is much older than that, dating back to at least 1528, where a pamphlet attacking the dogmatism of the church states:

Yf they say the mone is belewe

We must believe that it is true. 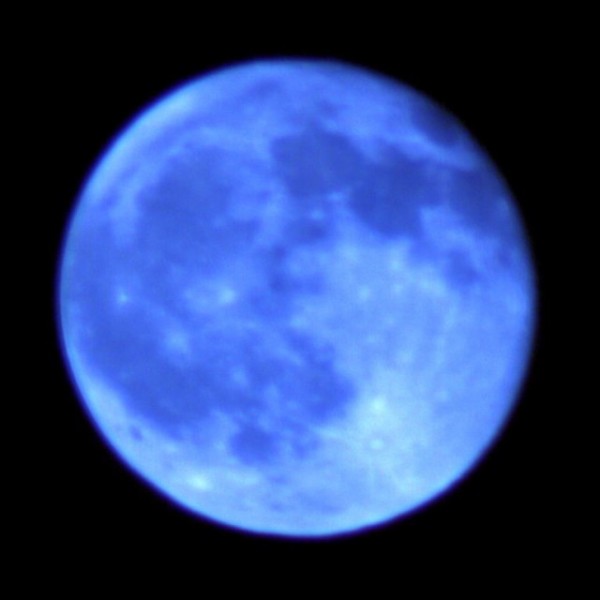 Q: Well, so is it true? Is the Moon belewe blue tonight?

A: No. In fact, if you watch it close to Moonrise or Moonset, you'll see that it gets progressively redder and redder as it gets closer to the horizon, and whiter as it rises higher in the sky. It will never turn blue. 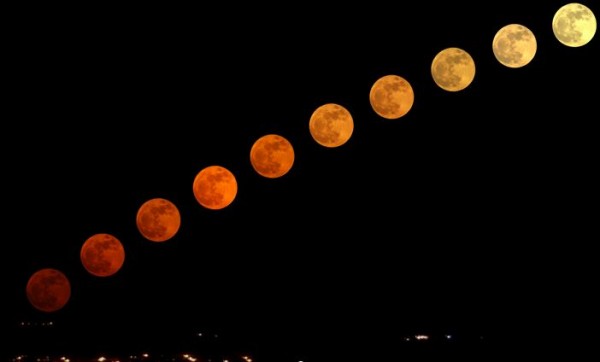 Q: So how did the expression "Blue Moon" come to mean having two full Moons in one month?

A: Each of the 12 Moons in a typical year had a name, some of which still survive to the modern day! For example, harvest moon, hunter's moon, wolf moon, and snow moon are names you may have heard of. (You can see a couple of lists here.) But there aren't 12 full Moons in every year; 12 complete lunar cycles, on average, only take up 354 to 355 days, while a year -- at 365.24 days -- is substantially longer!

Image credit, as well as plenty of information about the Lunar Cycle, can be found at singsurf.org.

Q: So why do we call the second full Moon in a month a Blue Moon? Why don't we still use the old definition of the third full Moon in those rare seasons with four?

A: Because of a misinterpretation dating to 1946, which brought the idea of two full Moons in a month being a Blue Moon into popular culture. 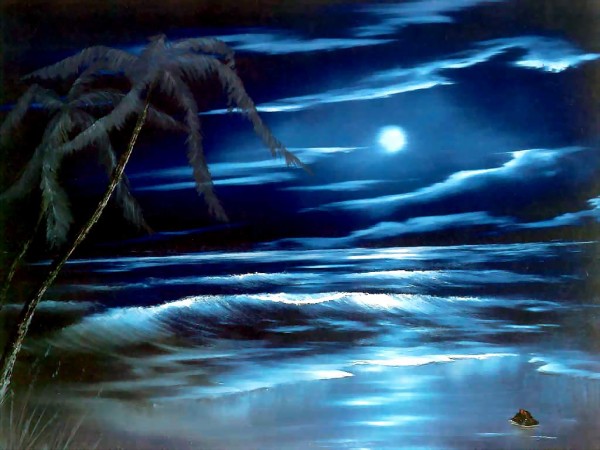 Q: Okay, fine, but can the Moon ever actually appear blue, like that Bob Ross painting above?

A: Yes it can! All you need to do is throw particles of the right size up into the atmosphere! You see, the entire spectrum of visible light comes in different wavelengths. 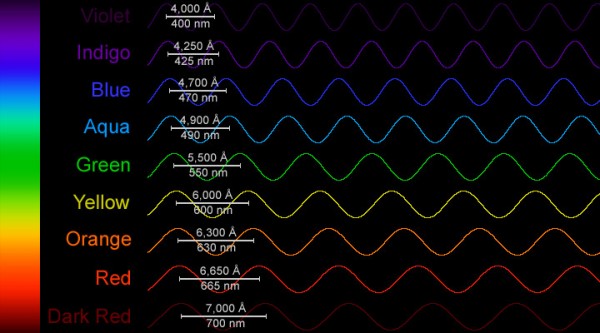 Violet/blue light has the shortest wavelengths, at about 400 nanometers (nm), while red light has the longest, at about 700 nm. Most atmospheric particles are around (or smaller than) the bluest wavelengths in size, which means that blue light gets scattered away (turning the sky blue during the day), and leaving lighted objects appearing red-colored when they're lower down on the horizon. 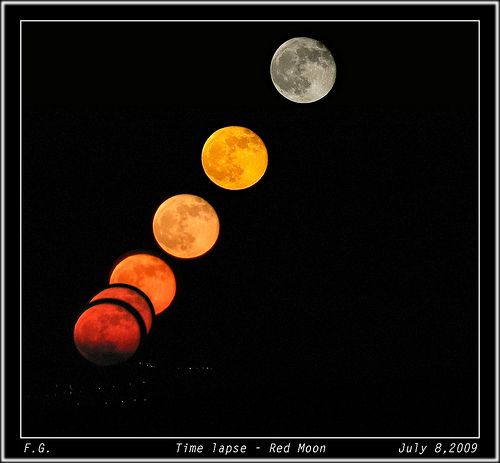 However, certain volcanic eruptions (like Krakatoa or, according to some, Mount St. Helens) will throw up particles with an average size of around 1000 nm, preferentially scattering away the red light (turning the sky red during the day) and leaving lighted objects -- like the Moon -- appearing blue! 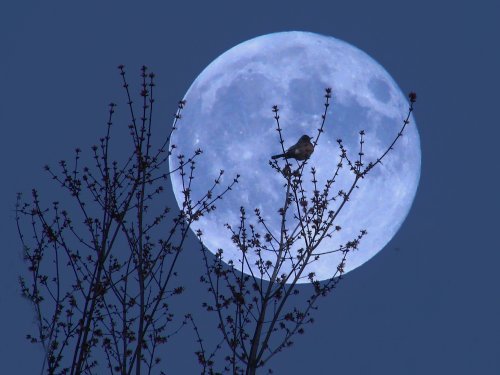 So Moons that are actually blue in color do exist, but that isn't what the expression "blue moon" means! Actual blue-colored moons are even rarer than two full moons in a month. (The latter happens every two-to-three years, which is still pretty rare!)

The Longest Full Moon of the Year

"Tell me what you feel in your room when the full moon is shining in upon you and your lamp is dying out, and I will tell you how old you are, and I shall know if you are happy." -Henri Frederic Amiel Tonight is a special night, although not for the reasons you may think. Yes, it's just a few days…

Sure, we're all familiar with sunsets, and how they appear to turn the entire sky close to the horizon red at night. But it turns out it isn't just the Sun, and it isn't just the sky. If you look at the Moon at either Moonrise or Moonset, guess what color it appears to be? (Even in urban settings…

On New Year's Eve, 2009, the Moon will be full, for the second time in december. A Blue Moon? Well, not really... although colloquially, it is, now. A full Moon looks full because it's directly opposite the Sun in the sky, from our viewpoint on Earth, so its whole sunlit side faces us. Photo by…

Total Eclipse of the Heart Moon!

As Bonnie Tyler sang, and later The Dan Band (with more cursing), Once upon a time there was light in my life But now there's only love in the dark Nothing I can say A total eclipse of the heart Well, it isn't the heart, but this Wednesday night, beginning at 10 PM Eastern Standard time (8 PM my…

This post is going to make a 93 year old woman's day! My grandmother and I have been calling each other on the night of the full moons for over five years now. It started because I'd be driving down the interstate and see a full moon and call her to ask her what it's name was. And then the following month, I would find myself in a similar fashion. So now it's a habit. And I just printed this out for her and put it in the mail. It will make her New Year!

Thanks very much for posting this. I found myself wondering yesterday, in conversation, what exactly the phrase "blue moon" meant and where it came from. You've neatly covered that, and answered some other awesome questions. Your post is timely, and appreciated.

When I lived in Appalachia, I saw one blue moon in the dead of winter, and one blood-red moon when there was no snow on the ground. Both were startling, and both were just above the horizon as I left for my dog's evening walk.

I remember the 1999 double blue moon. My question is, when will the next February blue moon be? And when was the last? It would have to be a leap year, and an especially rare one at that!

BTW, Rodgers & Hart get better press, but for my money, Patrick Alger's song (most prominently covered by Nanci Griffith) is sweeter. I have a version of it posted up today:
http://digitalcuttlefish.blogspot.com/2009/12/once-in-blue-moon-its-new…

Since February has (at most) 29 days, and the lunar period is 29.5 days, the short answer to your question is, "not since before Julius Caesar, and never again." Before Julius stole a day from February for July (and later, Augustus stole another one for August), February had 30 days. That was when the last one was.

If you have a full Moon at 12:00 AM on February 1st, the earliest the next one can be (if your February has 29 days) is about noon on March 1st. So the answer to your question is "never".

Also, tell your mom that I pronounce "aren't" with two syllables as well, although she's on her own with the other two.

Damn. I thought the lunar cycle was just *under*, not just *over* 29 days.

Thanks for the correction!

(and for someone who occasionally relies on meter, a word like "aren't" is a right pain, with a portion of one's readership thinking it is wrong either way.)

I had thought that the blue in the sky was due to Rayleigh scattering with primarily nitrogen gas molecules, not particles.

Have I had it wrong?

It is, don't worry, you got it right! The "particles" in this case are the nitrogen, oxygen, and water vapor molecules, which are -- in fact -- significantly smaller than the bluest wavelengths of light.

But they preferentially scatter the light that's closer in size to them: blue instead of red. The same principle is at work here.

But thank you for making me clarify!

Is the moon full everywhere around the world on the same days?

That graph is interesting. Its a perfect superposition of two waves of different frequencies. My guess would be the orbit of the Moon and rotation of the Earth?

The important thing for Rayleigh scattering is that the molecules or particles have a magnetic moment.

Interestingly, when the moon is bright, the night sky is blue. OK, very, very dark blue that looks black, but if you take an overexposed photo, the sky can look quite like day time. I guess this is becuase the moon's scattered light spectrum is not unlike the sun's spectrum.

A http://www.mortgagelasvegasnevada.com/cash-out-refinance.php quick look up at any "blue moon" will pretty much melt even the coldest heart. warm nights guaranteed! giver it a try and see what I mean.

So it's true the moon gets blue!

What's with that color table? The moon can also be red?