Why do 'Super Moons' always come in a row? (Synopsis)

"The supermoon is a 16-inch pizza compared with a 15-inch pizza. It's a slightly bigger moon; I ain't using the adjective 'supermoon.'" -Neil deGrasse Tyson

Earlier this month, the full Moon was the first "Supermoon" we've seen all year, where the bright full Moon coincided nearly perfectly with perigee, or the Moon's closest approach to Earth. Yet it won't be the last: November's and December's full Moons will also be Supermoons, appearing up to 14% bigger and 30% brighter than the full Moons from, say, March and April of this year. 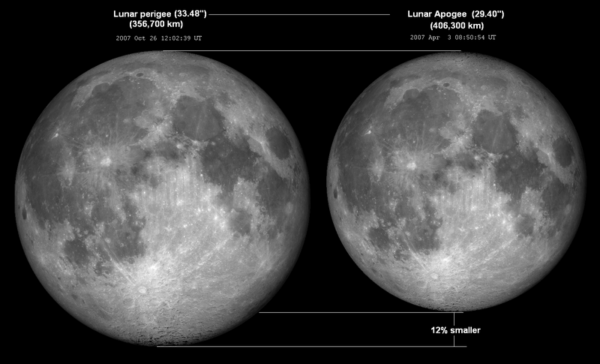 A perigee full Moon compared with an apogee full Moon, where the former is 14% larger and the latter is 12% smaller than the other. Image credit: Wikimedia Commons user Tomruen under a c.c.a.-s.a.-3.0 license.

This isn't a rarity, either: Supermoons always come in a row, and we usually get three in a row at that. Moreover, they don't happen at the same time every year, but appear on a cycle that's 411 days long. What's the cause of this, and why does the Moon behave as it does?

Come learn why Supermoons always come in a row thanks to the wonderful intricacies of orbits in our Solar System.

It did look quite impressive the other morning on my drive to work. But I figured that was just due to air clarity and the half-lighting of the dawn. Now that I know the effect is real, I'm looking forward to November.