Never be limited by other people's limited imaginations...If you adopt their attitudes, then the possibility won't exist because you'll have already shut it out ... You can hear other people's wisdom, but you've got to re-evaluate the world for yourself.
-Mae Jemison, first African-American woman astronaut

It's always difficult to break down barriers, but those who've been brave enough to try and who've finally broken through deserve to be remembered! One of the barriers that America put into place was that of women being astronauts. Despite the USSR's Valentina Tereshkova's becoming the first woman in space in 1963, the United States didn't begin accepting female astronauts until fifteen years later.

Here's Ray Charles' I Got a Woman to entertain you throughout this story. 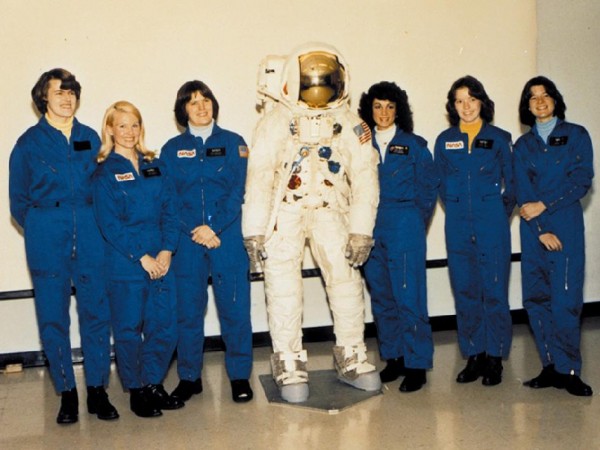 It's wonderful to get to look at a piece of history like this, but let's look closer. These six women, from left-to-right, are Shannon Lucid, Rhea Seddon, Kathryn Sullivan, Judy Resnick, Anna Fisher, and Sally Ride. The links are to their wikipedia pages, but you know what I find amazing about this? Every single one of these women made it all the way through training, and every single one made it into space! Let's give you a brief rundown of the space careers of these six pioneers. 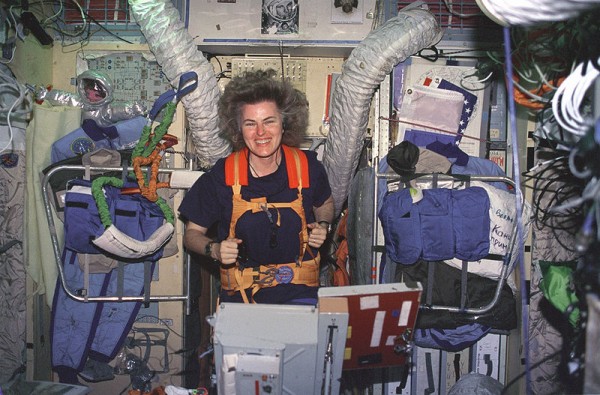 1. Shannon Lucid. She's had perhaps the most remarkable career of any woman has ever had with NASA. She first went into space aboad the Space Shuttle Discovery in 1985, and flew three more shuttle missions over the next eight years. But her fifth spaceflight, in 1996 (at the age of 53) was truly remarkable. She spent a record-shattering 188 days in space, 179 of which were aboard Mir. With a total of 223 days (!) in space under her belt, she had -- at that point -- set the record for number of hours in space by a woman and by any non-Russian.

But what you won't find on Wikipedia was the biggest thing that stuck in my head about her voyage aboard Mir. After six months in space, when she finally returned to Earth, she was still able to walk, surprising everyone from NASA doctors to President Clinton! She was the only person on her flight who could, despite being in space longer than anyone else on her shuttle! Since then, she has served as NASA's chief scientist, and continues to serve as CAPCOM (capsule communicator) for space shuttle missions.

2. Rhea Seddon. (Shown with her 1985 Space Shuttle Discovery crew.) The first female medical doctor to become an astronaut, Dr. Seddon flew into space three times aboard the space shuttle as a mission specialist, logging a total of 722 hours between 1985 and 1993. To put that in perspective, she has orbited the Earth 480 times from space. She retired from NASA in 1997, and continues to remain active in the medical community. 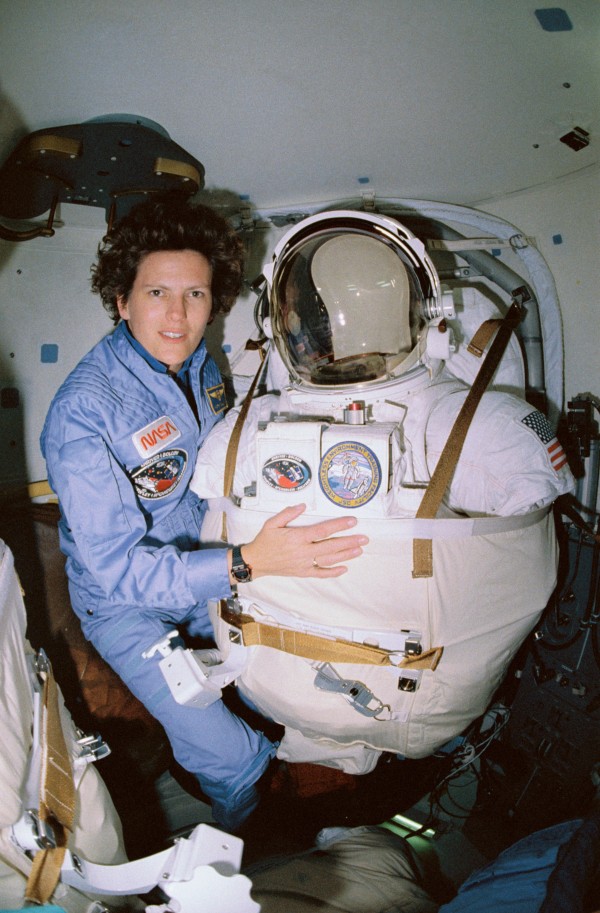 3. Kathryn Sullivan. Trivia question for you. Who was the first American woman to walk in space? That would be Kathryn Sullivan. In 1984, Geologist Kathryn Sullivan was a mission specialist aboard STS-41G, where she became the first American woman (and the second woman ever) to perform a spacewalk. This flight of the Challenger was also important, because it was the first time that two American women were in space at the same time! (It was also Sally Ride's second mission.) She would fly two more missions into space (including in 1990, when she was part of the crew that deployed the Hubble Space Telescope), logging a total of just over 22 days in space. She currently serves as the chair of General Interest in Science and Engineering for the AAAS. 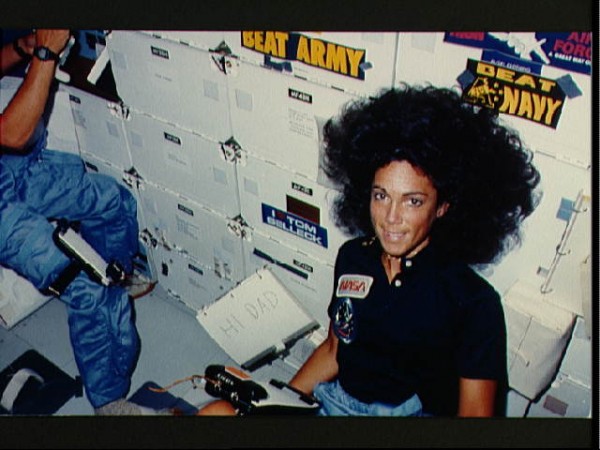 4. Judy Resnick. Unfortunately, not all of these stories have happy endings. Judy -- a Ph.D. in electrical engineering -- was killed in the Challenger explosion of 1986. In 1984, she became the second American woman (and the first American Jewish person) to fly into space, which she did as a mission specialist aboard the Space Shuttle Discovery's first flight. Apparently, she was a lot of fun, too! As wikipedia says:

During the flight, she was acclaimed for her weightless acrobatics and a playful sense of humor, once holding a sign reading "Hi Dad" up to the camera, and displaying a sticker on her flight locker that advertised her crush on actor Tom Selleck.

There is a lunar crater named Resnick after her, and the Institute of Electrical and Electronics Engineers has an award in her honor. 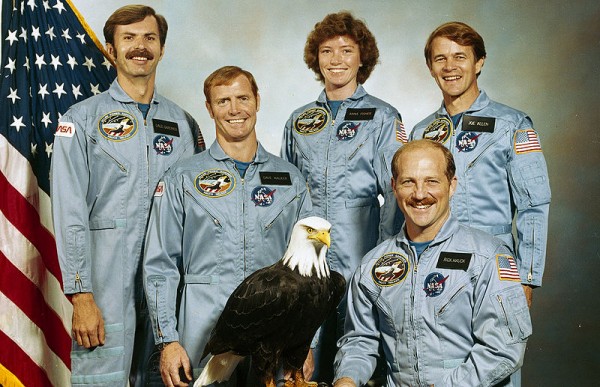 5. Anna Fisher. A chemist and a medical doctor, Anna was instrumental in the development and testing of the famous robotic arm aboard the space shuttle. She only flew one flight into space -- in November of 1984 -- where she became the first mother to fly into space. After an extended leave of absence, Fisher returned to NASA in 1996, where she remains active. She still hopes to fly into space once again. (And no, there was not a bald eagle on her mission.) 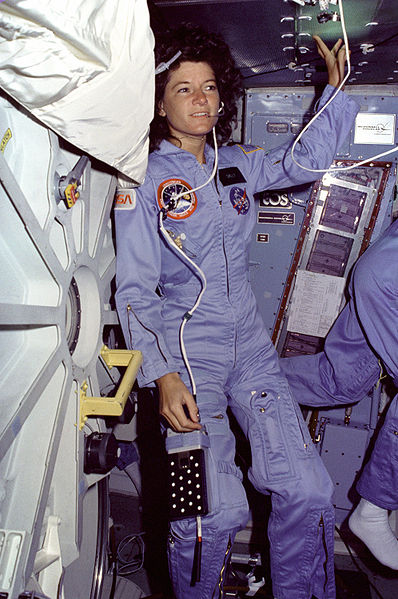 6. Sally Ride. The first American woman in space, Sally Ride is perhaps the most famous of anyone in this photo. (Sally Ride is also an astrophysicist, which automatically scores her a million points on my scoresheet.) She became the first woman to use the shuttle's robotic arm, using it to retrieve a satellite, and later headed the Presidential Commission's subcommittee of Operations investigating the Challenger disaster. She is also the founder of NASA's office of exploration.

After leaving NASA in the late 1980s, she became a Professor of Physics at UCSD, and in 2001 founded Sally Ride Science, an organization aimed at supporting young girls interested in math and science. She is the author or co-author of five books on space, all geared towards encouraging children's interest in space and science. To this day, she is the only person to serve on the panels investigating both shuttle disasters: Challenger in 1986 and Columbia in 2003.

These are just my chosen snippets of six remarkable human beings, and I hope you've enjoyed learning a little about them this weekend!

Probably worth noting that Dr. Ride was on the recent Augustine commission too. She saw what was wrong with the shuttle from Challenger and Columbia and I thought that gave the commission's findings more weight.

I've got a woman? I can't believe you didn't pick Mustang Sally. I couldn't stop singing that song all during STS-7.

HP, no way did I want another, "Ride Sally Ride" joke.

And, damn. There it is. Congratulations.

"To this day, she is the only person to serve on the panels investigating both shuttle disasters: Challenger in 1986 and Columbia in 2003."

"To this day"? You mean sometime in the future someone else might serve on Challenger and Columbia panels?

Women were proven to be great candidates for space flight long before these pioneers actually made the trip. Check out this brief introduction to the Lovelace Women in Space Program that took place between 1960 and 1962. Though none of the candidates made it to space, they were all shown to be more than capable.

And now into something completely different: I always like to see pictures of astronauts -- each and every time (since the sixties) I realize, that I don't have to be embarrassed because of my ridiculous hairstyle. Uhahaha!

Where is Dr. Mae Jemison? I would think she deserves a mention also.

Hear hear, plm! Where is Dr. Jemison, indeed? (I must admit I had a pretty massive crush on her...)