"A good heart is the Sun and the Moon; or, rather, the Sun and not the Moon, for it shines bright and never changes." -William Shakespeare

Did I ever tell you how lucky you are? 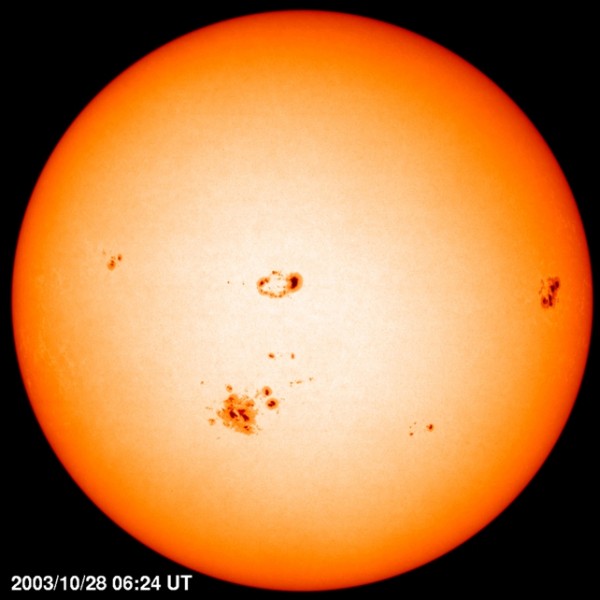 Lucky, indeed, to have the Sun for a star?

Our Sun -- the ultimate source of all the light, heat, energy, and life on our world -- is remarkable in how constant it is. In fact, we didn't even know just how constant it was until we launched the SOHO satellite, shown below. 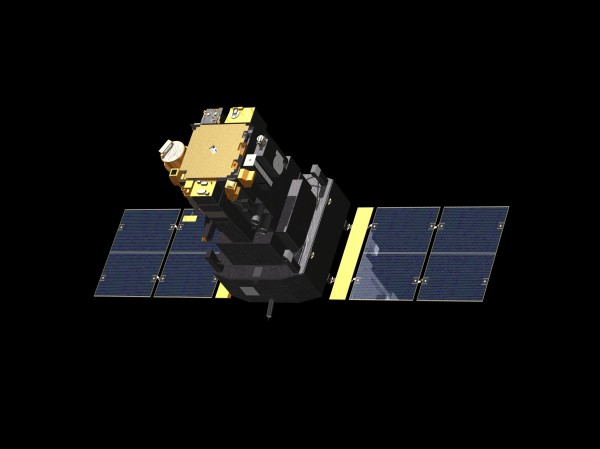 SOHO has just released their results from more than 12 years of observing the Sun from space, and found that the size of the Sun has been constant to within 0.003% over that entire timespan!

This accuracy is unprecedented. The scary thing is, it didn't need to be that way. 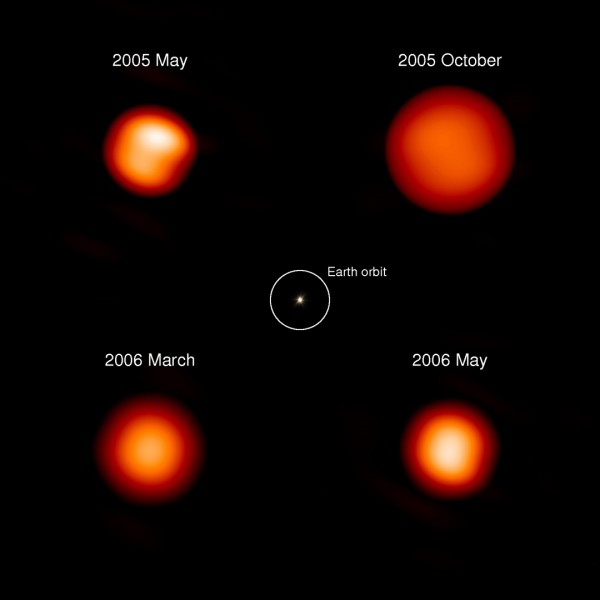 There are plenty of stars that change their size dramatically over short periods of time. (Like Chi Cygni, above.) In fact, there are a whole slew of astronomers who study only these objects: variable stars. (Check out the AAVSO for more info.)

Sure, there are plenty of stars that get brighter and dimmer because of things like sunspots, or having another star pass in front of it, or other external phenomena.

This really happens, and it happens for lots of different stars, just some of which are shown below. 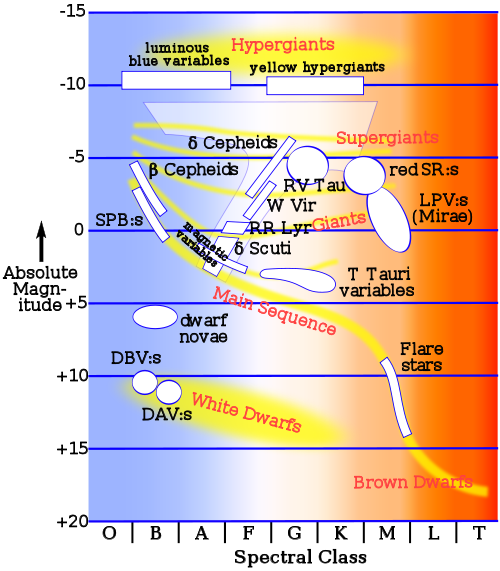 While our Sun is nearly completely constant in size and changes by just one-thousandth of a magnitude in brightness, there are stars that "pulse" and change their brightness by huge amounts. By so much, in fact, that if our Sun were to do this, the Earth would alternately freeze and boil multiple times every year! 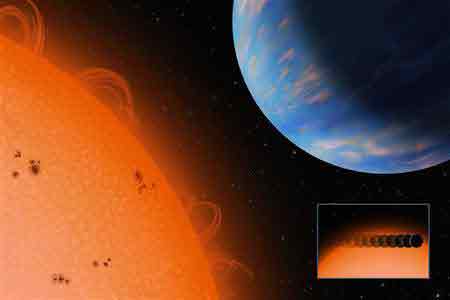 Why's this? What's going on with these stars that makes them so different from our Sun?

Our Sun, like all stars, really has only two things in play that determine what's going on. On one hand, there's gravity, trying to pull the Sun in on itself, trying to collapse it down as far as it'll go. But on the other hand, the Sun produces energy in its core by burning its Hydrogen fuel into Helium, through nuclear fusion. That process releases a bunch of energy, which makes its way to the surface and eventually reaches us as sunlight. 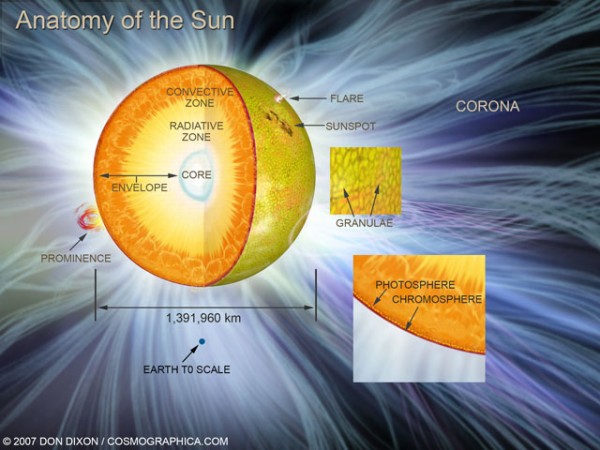 The spectacular thing about this is that the outward pressure of this radiation exactly balances the force of gravity, and that's why the Sun maintains its constant size!

And this is true for most stars that burn hydrogen into helium. But this isn't the case for all stars, and it isn't always going to be the case for our Sun, either! Why not? 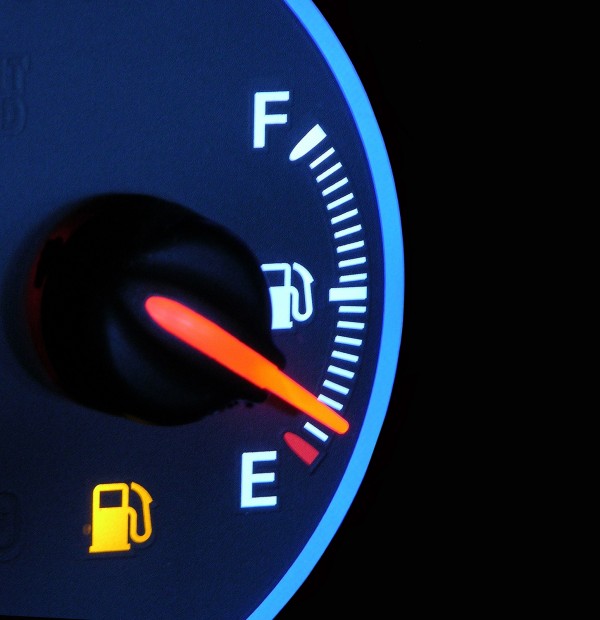 Because at some point, we're going to run out of fuel in the core! When that happens, that outward pressure drops to a much lower value, but the force of gravity is still huge!

What happens then? Your beautiful star, which stayed just about the same size for billions of years, suddenly starts to collapse in on itself!

and the cycle repeats!

That's what a variable star does, in a nutshell, and damn, aren't you glad the Sun isn't one! 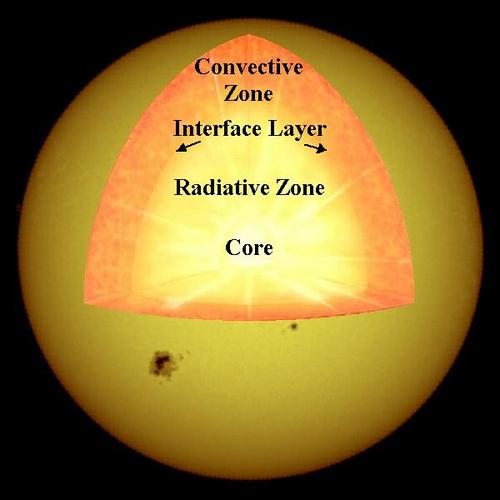 So the next time you're lamenting how "boring" the Sun is with its constant size, tiny sunspots and flares, and energy output that varies by less than 0.1% over the entire measured history of the Sun, don't cry too hard. The very gentleness of our nuclear furnace is what allows you to be here in the first place!

So the next time you're lamenting how "boring" the Sun is with its constant size, tiny sunspots and flares, and energy output that varies by less than 0.1% over the entire measured history of the Sun, don't cry too hard. The very gentleness of our nuclear furnace is what allows you to be here in the first place!

And even that 0.1% is enough to make the difference between the subtropical climate that enabled the dinosaurs to reach their peak and the great ice ages and gave rise to the wooly mammoth, the medieval warm period and the little ice age.

The sun is boring! It's boring into your body with potentially lethal radiation, so you'd better slather on that lotion whenever you go out in it! Plus the sun is very hot, so under no circumstances should you allow children to touch it.

Very timely. I'm reading where solar activity is on the increase as per a natural cycle which will disrupt communications and probably cause some warming trends, weather changes, etc. I expect the carbon tax/money grabbing one-world government agenda driven politicos to use such changes to further push their point while their opponents will simply direct our attention towards the sun as the chief cause cause for all of this while both parties continue polluting the atmosphere unabated ("Carbon credits for your Gulf Stream V, mister?" What a con job.)

It might be interesting to increase public awareness of just how thin our breathable atmosphere really is. Man-made global warming is just a side show to our maintaining same. It doesn't matter how much sea level rises if we've already suffocating. Those who actually fly in their private jets between major cities already know how much blight hangs over them, but park their own personal magic carpet fossil fuel burning baby - no way.

All the more reason to worship and be thankful for the Sun over some zombie from Nazareth ;)

In light of previous comments I would enjoy reading your take on orbital forcing and climate. My understanding is that 1) the sun would have been 1-2 percent cooler during the mesozoic and therefore other factors, including but not limited to higher CO2 must be a cause, and 2) that the ice ages of the past 3 million years were driven primarily by changes in orbit refered to as Milankovitch cycles and then complemented by feedback effects, including atmospheric CO2 levels.

Both topics (sun and orbit) are great ways to discuss global warming by starting with astronomy where there's less politicized polarization. Both are foundations to understanding climatology.

Did you notice how clean and fresh the troposphere was after 911, for the three no fly days and I'm told the pan evaporation rate increased also. The sky was blue again just like when I was young...we pay a heavy price for the jet set lifestyle.

Both topics (sun and orbit) are great ways to discuss global warming by starting with astronomy where there's less politicized polarization. Both are foundations to understanding climatology.