She Blinded Me With... A Nova?

Be careful whose advice you buy, but, be patient with those who supply it. Advice is a form of nostalgia, dispensing it is a way of fishing the past from the disposal, wiping it off, painting over the ugly parts and recycling it for more than it's worth.

But trust me on the sunscreen. -Baz Luhrmann

Our Sun gives us practically all of the light and energy our planet receives, and it does it, at its core, by fusing light elements into heavier ones. 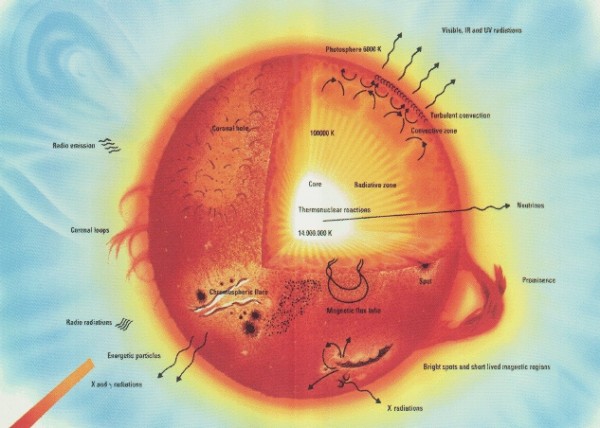 And even though this nuclear fushttp://en.wikipedia.org/wiki/Gamma_rayion releases a tremendous amount of very high energy photons (known as gamma rays), the photons that reach us are mostly visible light, much lower in energy. 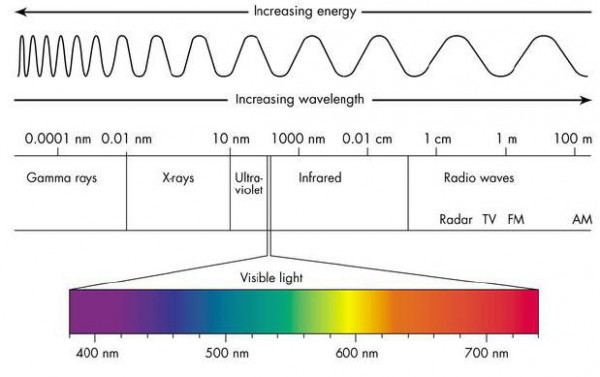 Why? Because passing through the entirety of the Sun, from the core all the way to the surface, takes tens of thousands of years and trillions upon trillions of collisions, knocking the energy down in the process.

But we get plenty of gamma rays on Earth; they just don't usually originate from the Sun. In the physical world, there are plenty of ways to make them, including radioactive decay, smacking some antimatter into normal matter, and by accelerating charged particles fast enough in strong enough magnetic fields. In space, gamma rays are made near pulsars, black holes, and in the tremendously violent deaths of massive stars: supernovae! 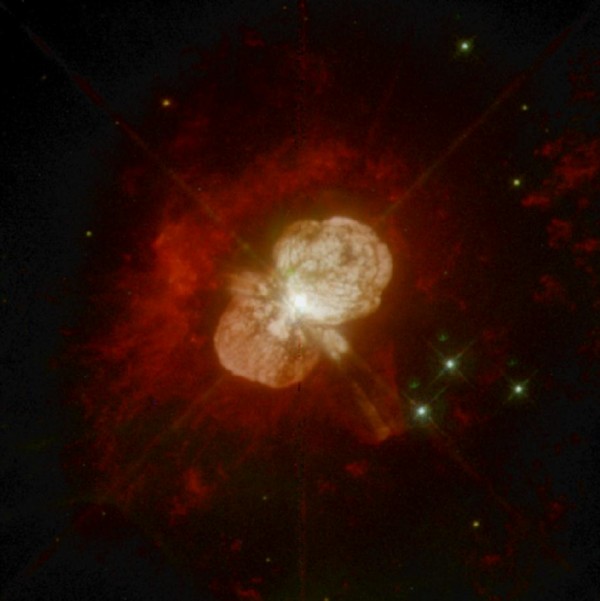 But what about the supernova's non-super little brother, the nova? Unlike a supernova, which destroys the entire parent star, a regular nova is much more restrained. When a star like our Sun fuses all of the light elements that it can, what's left over is a solid core of that nuclear ash: things like carbon, nitrogen, and oxygen in the case of our Sun. Without sufficient mass, temperature, and pressure to fuse these elements further (into things like Silicon and Iron), the leftover matter from a used-up star contracts down to around the size of the Earth, giving off a small amount of light.

The leftover, dim collection of ultra-dense atoms is known as a White Dwarf star, and is the eventual fate of our Sun. 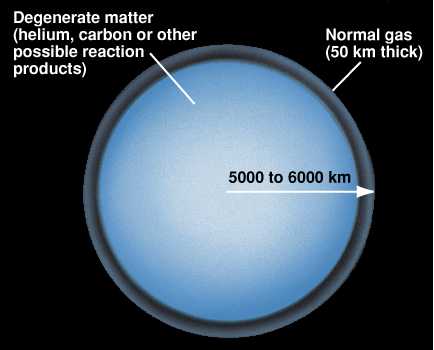 But despite their tiny size, they're often just as massive as a full-blown Sun-like star, which makes them excellent at gathering up interstellar gas and dust. This is why white dwarf stars have thick atmospheres.

Over time, these atmospheres get thicker and thicker, and the pressure at the surface gets higher and higher. For many white dwarf stars -- the ones that can collect enough matter -- something spectacular happens. If you get the pressure of your (mostly hydrogen gas) atmosphere to be high enough, you can ignite nuclear fusion again! And this tremendous release of energy is what a nova is! 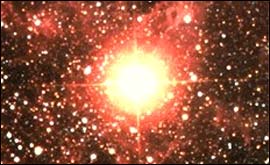 Novae aren't all that violent, when you look at the numbers. Despite being thousands of times brighter than a star like the Sun, that brightness usually falls off quickly after a month (or a few). The white dwarf star only loses about one-thousandth of 1% of its mass. And after a few thousand years, enough matter will fall back onto the star to make it go nova again.

But one thing we've never seen before from a nova? The highest-energy form of light there is: gamma rays. Until, that is, right now. 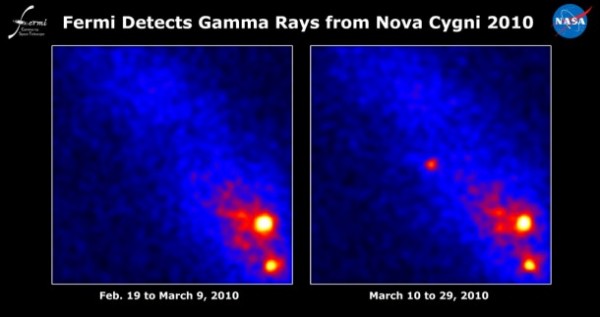 The gamma-ray telescope, Fermi, was observing, when Nova Cygni 2010 went off in March. The "before" picture, on March 10th, is to the left. There are gamma rays visible here, but look at the after picture on the right, 19 days later. There's a brand new source of gamma rays, corresponding perfectly with the location of that nova!

This is the first time ever that gamma rays have been associated with a nova, a surprise for both observers and theorists! So how do these novae, with their relatively mild energy releases (for astrophysics, at any rate) manage to make gamma rays?

They must be making magnetic fields much stronger than anyone anticipated. To me, it's absolutely an amazing bit of science, because it's a shining example of one new observation forcing everybody to rethink how they "know" these things work.

So can you make gamma rays with a nova? Hell yes! Just don't forget your sunscreen!

If it turns out that there are novas with gamma rays and novas without gamma rays, can we rename the ones with as "pintos"?

I understand that it's an exciting new observation; but what particular theories or specific ideas need to be rethunk? for example??? danke

The sunscreen quote is from Mary Schmich of the Chicago Tribune. Luhrmann licensed it for the song, and there's an urban legend that Kurt Vonnegut wrote it as a graduation speech.

I recognize your second picture as Eta Carina, a suepermassive star that is losing a lot of mass. Not a good example of a nova. Eta Car will supernova someday (perhaps it already has but the light hasn't reached us), but a Nova doesn't seem to be in the cards.

"What happens to the accumulated matter whose unstable fusion causes the nova? Is it all blown off into space, so the the dwarf star isn't gaining mass over the cycle (accumulate mass, then boom,... rinse and repeat)?"

It is mostly thrown away. However, some of it eventually falls back - so over a time a white dwarf can explode as a Supernova.

PS: I always liked novae, just imagine - the entire surface of the start becomes one huge thermonuclear explosion! I'd really like to see one close.

If the slow addition of mass to an old star causes a large scale explosion that throws off most of the accumulated mass, why doesn't this happen to stars during their formation?

With so much stuff going on in the universe at any given time, how can we be sure (especially considering there hasn't been much time to review the data) the source of gamma radiation being emitted is not from an object directly behind the observed nova?

@7: One difference between new stars and white dwarves is that in a new star the fusion ignition happens near the center of the star. I'm sure some of the mass does get blown out, but not as spectacularly because the mass between the center and the surface absorbs some of the energy. In a white dwarf, there is < 100 km of stuff between the ignition site and the surface, so more of the energy can propel mass to escape velocity.

@8: It's theoretically possible that the gamma source is from a background object, but the coincident timing makes that rather unlikely. It's worth further observations to check (some gamma ray bursters are repeaters, and a repeat gamma burst when the foreground object doesn't go nova would confirm that the gamma source is indeed in the background).

@9: Eric, it occured to me immediatly after my post that they should have (and most certainly did) take a spectrograph of the gamma radition. Therefor, they would have measure the light to find out the composition, speed, and (this applys to my question) distance. Wouldn't they be able to obtain the location of the source based off the spectrograph? If so this would rule out an alternate source, and they also said the gamma source was very faint. I was under the impression that even at the edges of our observational abilities, a gamma ray burst from a supernova would be incredibly strong. Am I correct in this line of thought?

Simple astronomical observations and interpretations as this are credible.(whereas meta-astronomical assumptions of lambda-cdm, etc). Nice, what's to disbelieve about this nova.

@10: They would have done such checks with ground-based observatories, but gamma-ray telescopes are space based, and this one wasn't even looking for gamma rays from the nova but just happened to be looking in the right general direction while observing for a different purpose. So it's possible that nobody thought to check the spectrum while they could, because the source was only discovered when the people doing the data run went to look at their data. Also, since it was supposedly a faint source, there may have been photon counting limits that would have made it hard to do spectroscopy. That depends in part on the detector design. Gamma ray telescopes have much in common with energetic particle detectors in space (indeed, the builders of either type of instrument have to take steps to either prevent or calibrate out false positive counts originating from the other source).