Missing a Thousand Galaxies or so? Here's how to find them!

"It doesn't matter what temperature the room is, it's always room temperature."
-Steven Wright

Far and away, one of the greatest things the Universe has ever created are dense clusters of galaxies! 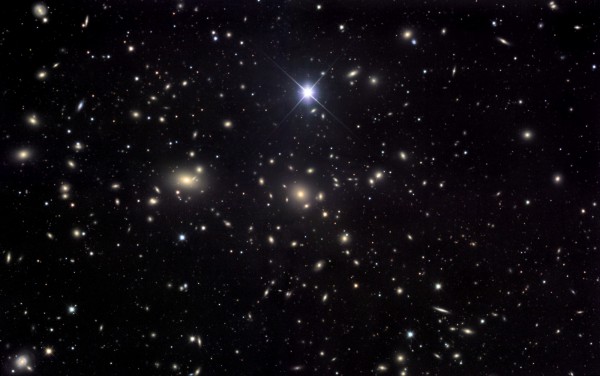 The Coma Cluster, shown above, is a classic example of one of these colossal objects. (And as always, click on it for the huge version.) These giant clusters of galaxies contain over 1,000 galaxies that are Milky Way-sized or bigger, and span a few tens of millions of light years across space.

Compare that with our paltry local group of galaxies, where we have exactly two galaxies Milky Way-sized or larger: us and Andromeda. 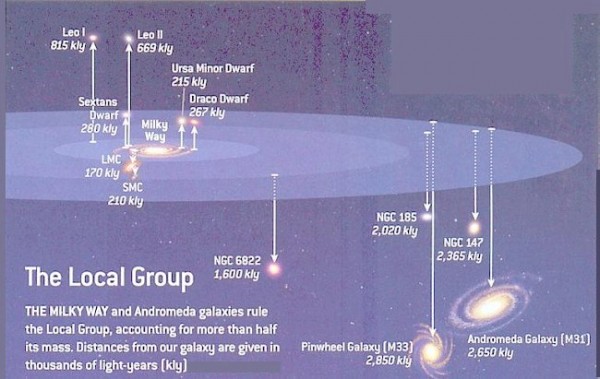 But there are plenty of great clusters of galaxies relatively close by to us, where "relatively" means within a few hundred million light years. There's the Virgo Cluster, 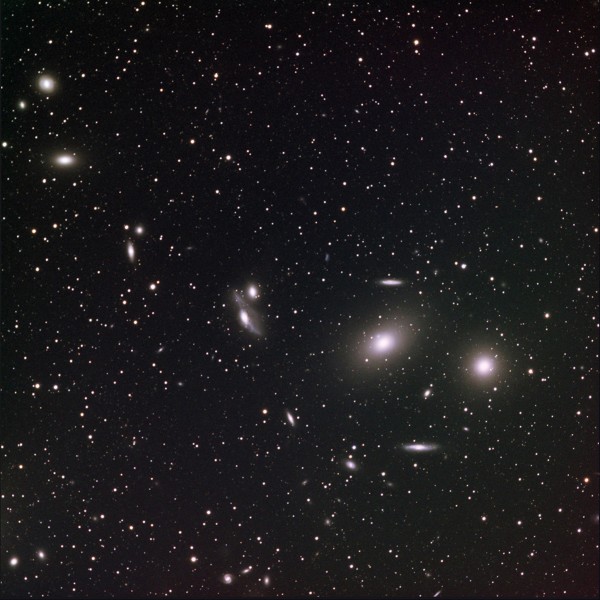 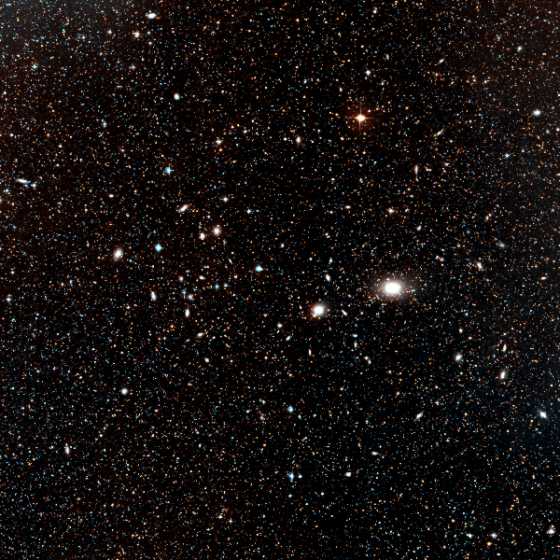 and the Fornax Cluster, for starters. 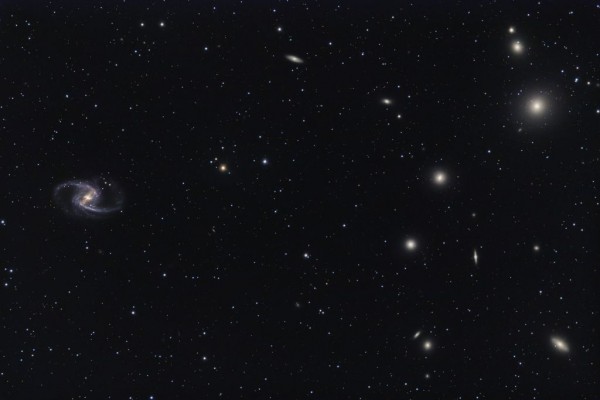 There are plenty of clusters like this throughout the Universe, but the ones we know about are mostly relatively close by.

Why is that? Shouldn't we see clusters billions or even tens of billions of light years away? 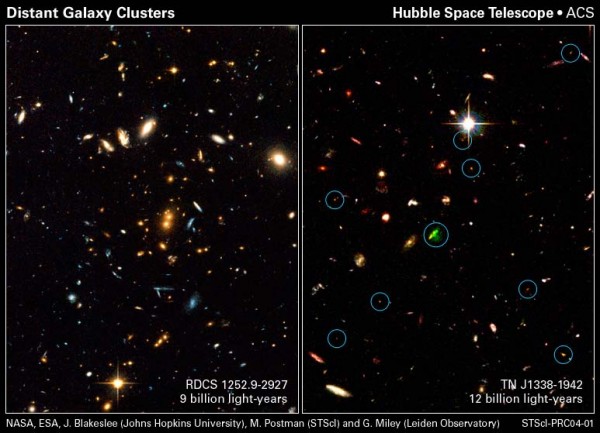 Well, the reason we can't see many isn't because they aren't out there, it's because -- just like in everyday life -- it's harder to see things the farther away they are! 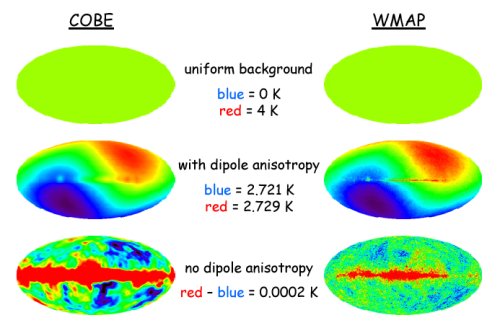 Above is the Cosmic Microwave Background, or CMB for short. The Universe is filled with this omnipresent glow of the leftover radiation from the Big Bang, and as the Universe has expanded and cooled, this once-Ultraviolet radiation has cooled all the way down from Billions of degrees to its current temperature of less than 3 Kelvin!

But what you also might notice is that the temperature isn't perfectly uniform everywhere; there are tiny regions that are a few microKelvins hotter or cooler than average, and there are many reasons for this. But one particular reason can help us pinpoint ultra-distant galaxy clusters!

Here's how. Take a typical galaxy cluster, like Abell 2219, above. You might notice the bright galaxies against the dark backdrop of empty space, and you ought to, because you see visible light. But what you're not seeing with your eyes is just how hot this galaxy cluster is. Distributed all throughout this cluster are millions of light-years worth of hot gas, which we can see (below) if we look in the X-ray part of the spectrum! 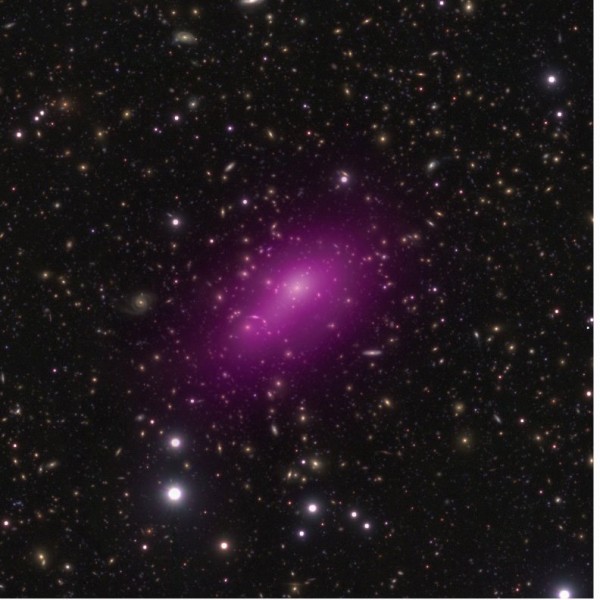 So what we need to do is take our X-ray maps of deep space and try to look for unexplained "hot spots" in the CMB. Luckily, we've got a new satellite, Planck, looking for them at the highest sensitivities and resolutions of all time! (Hot spots show up in red.) 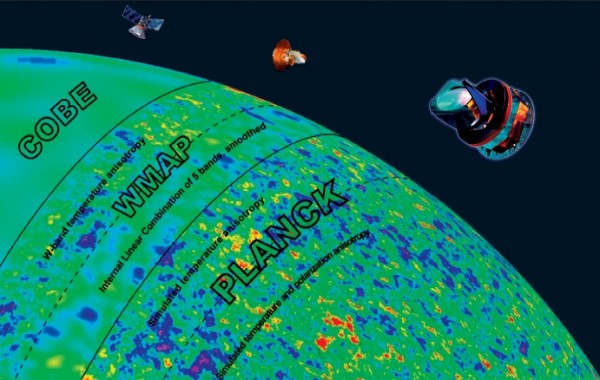 If the hot spots match up, and are in the same location, then we might, just maybe be looking at a brand new galaxy cluster or supercluster!

Welcome to the first of its kind: the first supercluster ever found this way!

This is remarkable, because if there were just one cluster of galaxies there, Planck wouldn't have been sensitive enough to find it. But there are three in that tiny little region of space! This is actually such cutting-edge news that we don't even have a visible light image of this region to compare with!

This method, if I can editorialize a little bit, is badass. There are plenty of other galaxy cluster and supercluster candidates that Planck has found, and they could be new clusters or superclusters, too! But we won't be able to confirm them without our X-ray astronomer friends, who need to do follow-up observations. (So be nice to them!)

And now you know, if you're missing a thousand galaxies or so, how to get out there and find them! Thanks to Universe today and the ESA for reporting this!

Great photos to go with the story.

What other phenomenon could account for hot spots Planck is detecting if it doesnt appear to be from a galaxy cluster?

But, how many light years away is this new cluster (do we have an estimate yet?)

But there are three in that tiny little region of space!

How many hundred million light-years across is "tiny"...?

If we're finding "missing" galaxy clusters, would that have any impact on our search for dark matter, or do the calculations already take these unknown clusters into account - or is the comparison totally unrelated?

Thanks Ethan. This is truly badass. And it shows the serendipitous and exponential effect of investing in basic data gathering observatories, space based or on Earth, at all parts of the e-m spectrum. When in doubt, combine them !!!

This also belies the pedestrian view that the COBE and WMAP observations only have value to 'prove' the Big Bang, which is like saying Galileo only invented the telescope to 'prove' the Church was wrong.

200 microKelvin differences at 3K background? That's crazy. I'm currently working on (terrestrial) instruments and I'm happy to use technologies which give me about 0.8K with a background of 220K. I look at the mid-IR, not the far IR - but still, microKelvins difference on 3K is an incredibly small change in signal at any wavelength.

Sounds like BS to me. The reason it isn't as bright at midnight as at midday, although every line of sight ends in a light source, is that almost all of the incoming light is outside the visible spectrum. That solution must be a good 80 years old. I'm a fucking poet not a physicist. If I can grip the logic then a phd should come up with something mindshakingly better. Come back Lyall Watson all is forgiven.

I'm a fucking poet
not a physicalist

X-rayted great clusters
I do long to sea

Of turtle island warthogs
not of galaxseas

"I'm a fucking poet not a physicist."

And your not much of a poet either.