"The image is more than an idea. It is a vortex or cluster of fused ideas and is endowed with energy." -Ezra Pound

Back in the 1800s, observational astronomy was already entering its heyday. We had already discovered Uranus, the first planet not visible to the naked eye, knew of a number of comets and asteroids, and had a whole catalog of "bizarre" objects in the sky. 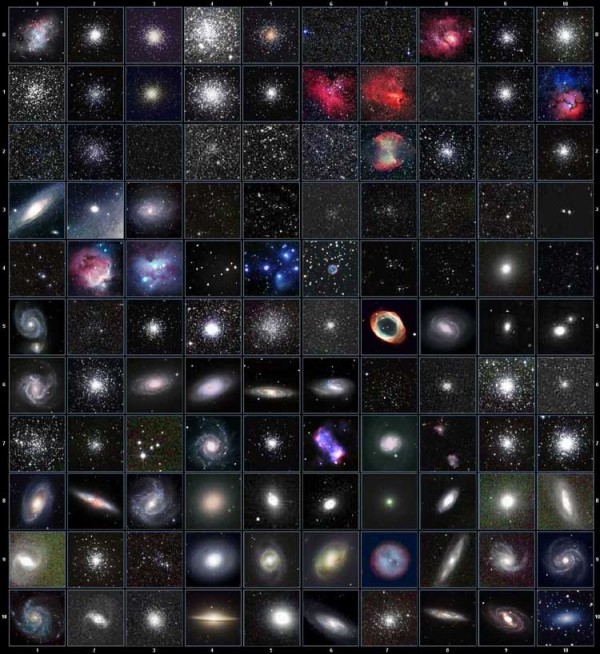 Some turned out to be star clusters, globular clusters, remnants of exploded stars, or other galaxies entirely! But one of the unfortunate things about astronomy around 1800 is that the Southern Hemisphere objects were grossly under-represented. It wasn't until 1834, when John Herschel (son of William Herschel, famed discoverer of Uranus) first laid eyes upon NGC 3603. 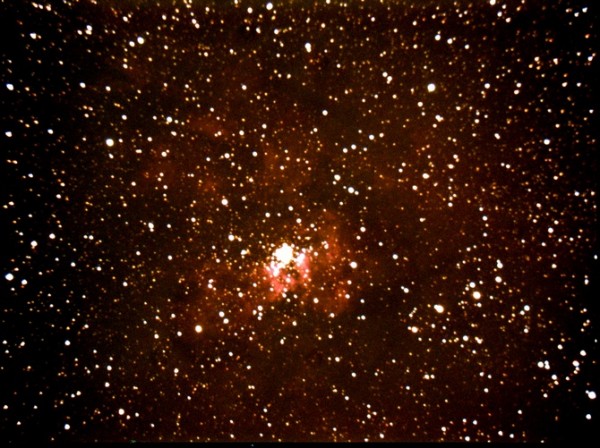 This object was so bright and dense, Herschel originally thought this was a globular cluster! You don't have to look to hard to figure out why. 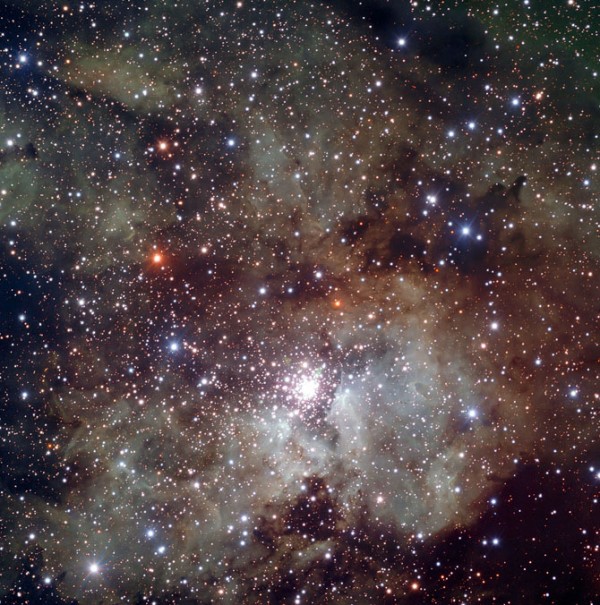 What's a globular cluster? Have a look at Messier 3, shown below, which is an actual globular cluster, with hundreds of thousands of stars located within just a handful of light years of one another. 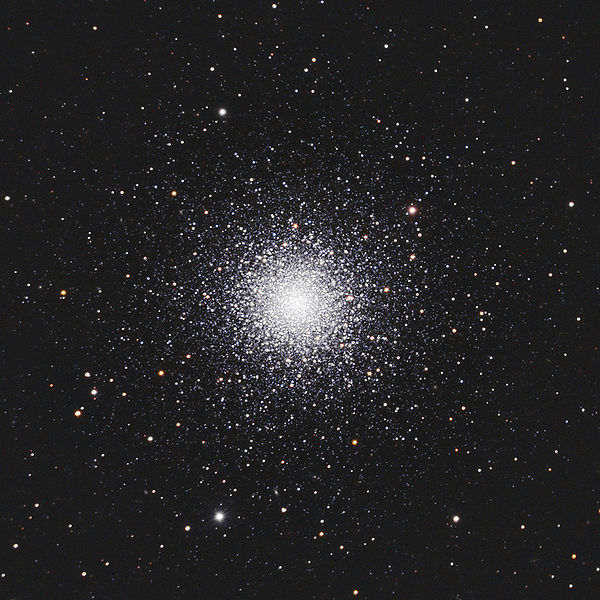 But the Hubble Space Telescope, as it so often does, told us so much more about this object. Let's take a look at the first famous Hubble picture of NGC 3603. 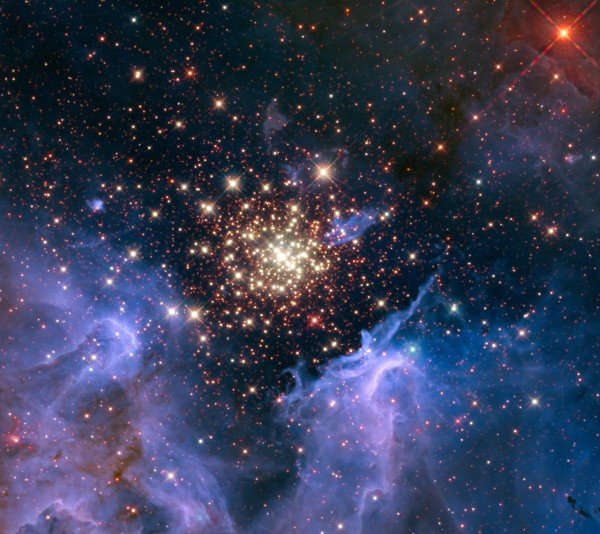 Sure, it might look like a globular cluster, but it's far more interesting than that. Notice how it's surrounded by some sort of gaseous nebula? Globular clusters live mostly in isolation, far away from any other action. But this glowing gas shows us that there's a lot going on near this cluster. This is a new star cluster, and it's a part of our own galaxy, only 20,000 light years away!

But it isn't just special because it's new. 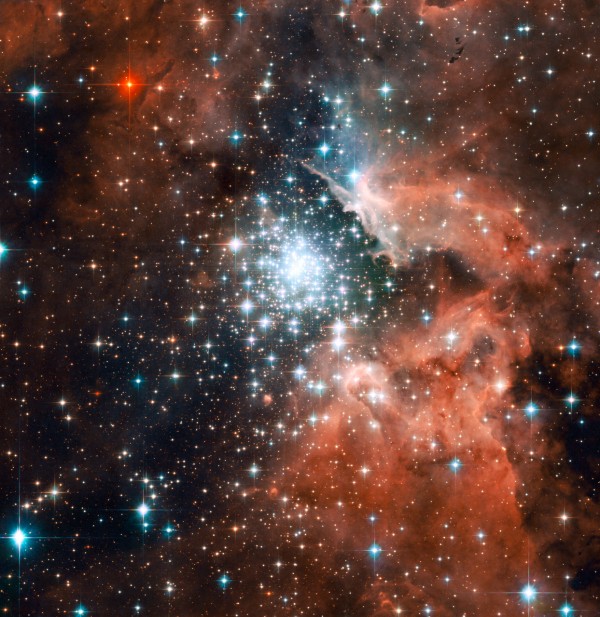 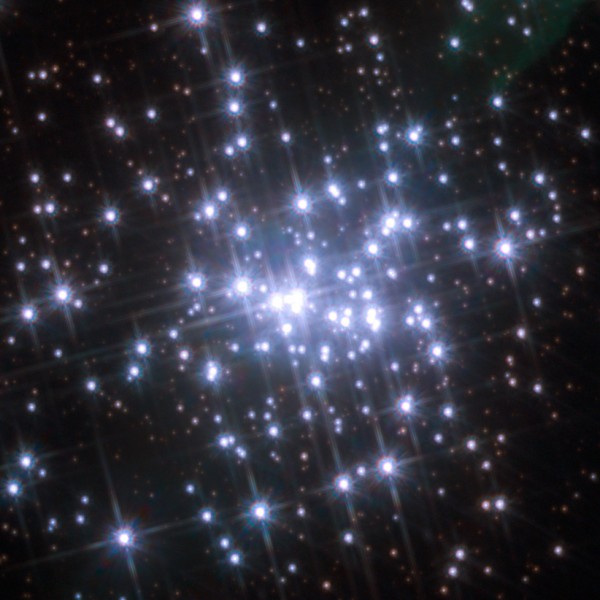 Some of these stars are huge. Compared to our Sun, which is a G-type star in the diagram below, this collection of O-stars is amazing, including one with a mass of 116 times our Sun!

But when we get all the way down to it, our advanced telescopes with adaptive optics -- particularly the VLT -- can do even better than Hubble in some ways!

Take a look at what the Very Large Telescope discovered when they turned on their new adaptive optics system for the first time (at right, below). 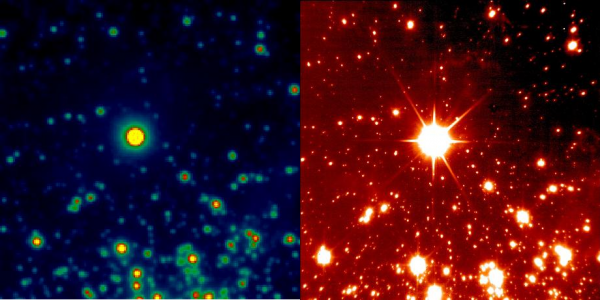 The difference is amazing! Not only are there these big bright stars in there, but there are a whole slew of smaller, faint ones! The brightest objects often dominate, but thanks to new advances in imaging technology, we can learn that even in the brightest, densest star cluster ever discovered in the Universe forms the same faint, dim stars that we see in the darkest places!

Some of the most wonderful places in the Universe are right in our own backyard, but this is one for those of you with access to the Southern Skies; NGC 3603 is invisible to all of us in the U.S. and Europe!

For one last spectacular fact and image of it, it contains the densest collection ever discovered of bright, massive stars at its core. Want to see? 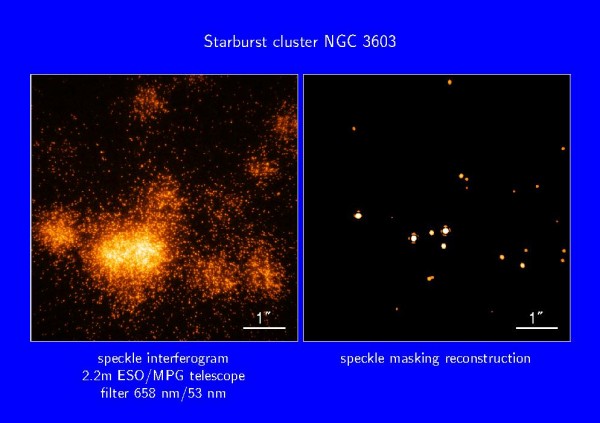 Simply amazing, that we can reconstruct the stars in the core from the images at left. And it's totally conceivable, billions of years ago, that the Sun was born in a region just like this. Enjoy these gorgeous views of baby stars, and have a fantastic weekend!

I see what you did there *secret-SciBlogs-fist-bump*

Live in Brisbane Australia. I am going to go looking.....

If I unserstand correctly, these stars are big enough to end their life as super novas. And lifespan of huge stars is relatively short, so they are going to explode in near future ("near" in geological scale of course). Are these stars close enough to be considered as a threat for our civilization / life on Earth / Earth itself?

Another delightful and informative post, Ethan! At 20,000 ly, even the largest probably is not a risk for this system, in a few tens of millions of years, but it'll make an incredible 4th of July display!

It probably won't matter to us but if it is closer to the center of the galaxy than the Sun then it will be catching up to uss. If it were farther then we would be pulling away.

I notice a Galactic Coordinate System of some sort in which Earth is the center. I wonder if it would be more Copernicus and useful if there was one with the center as the center and earth at some percentage of the disk radius.

There probably is one that I haven't seen.

Another matter is the "up and down" motions meaning the oscillating motion above and below the disk.

Still another is that what we see is in the past meaning that looking at M74 is much closer to what M74 looks like than looking at M65 and seeing what it looks like. The reason is because the "front half" is "newer" and the "back half" is older and we see what it was X years in the past compared to the front. Just how much this means when comparing the real map as compared to the observed map I don't know.
I also don't know about the Gravitron or Gravity Waves but wonder if that last paragraph has some effect on them. Does the orbits of the planets work with "gravity" being instantanious or at some speed, light or otherwise? Go to the oldest measurment, maybe if Galileo really did see Uranus, or some other better measurment, and see if calculating back using different speeds of "gravity" produces a true observation as recorded back then.

"up and down" motions meaning the oscillating motion above and below the disk.

If I've worked it out correctly, the 1" (1 arc second) marker in that last pair of images corresponds, at a distance of 20,000 light years, to a span of about 1 light month on a plane perpendicular to our line of sight.

So it's quite a bit more crowded than our own stellar neighborhood.

I'm having serious doubts that the person posting here is actually Elaine Schattner. Most breast cancer survivors would be rightfully pissed at people who sell scam treatments to other cancer evet Ã¶nemli bi duru gercekten olabilcekmi

I wear the black for those who never read,
Or listened to the words that Jesus said,
About the road to happiness through love and charity,
Why, you'd think He's talking straight to you and me.