Hubble for the Holidays: Eta Carinae

"We find them smaller and fainter, in constantly increasing numbers, and we know that we are reaching into space, farther and farther, until, with the faintest nebulae that can be detected with the greatest telescopes, we arrive at the frontier of the known Universe." -Edwin Hubble

There's really only one way to appreciate just how far we've come in our quest to learn about the Universe thanks to the Hubble Space Telescope. 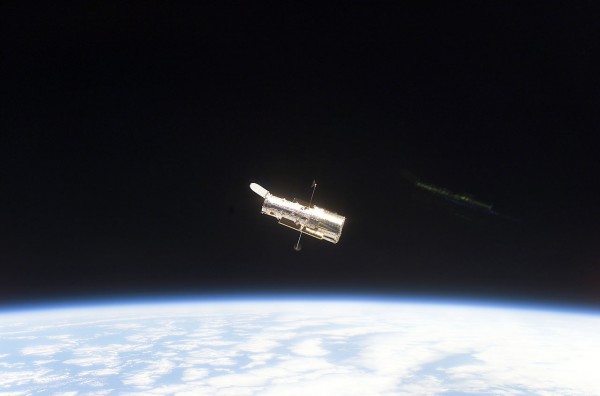 That is, to take a look at something before the Hubble Space Telescope came along, and then to look at it with Hubble. Preferably, we can look at it multiple times, as Hubble has undergone a number of upgrades throughout its 20 years in space! 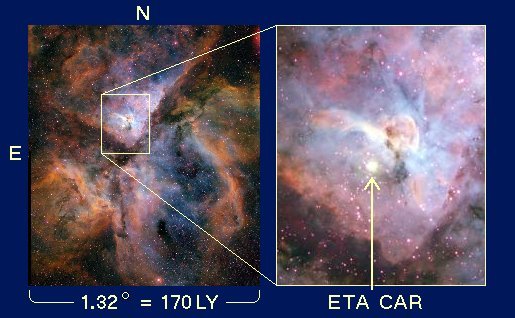 The Carina Nebula, NGC 3372 (shown above), is a hotbed of supermassive, young stars. With at least 10 stars over fifty times the mass of our Sun, it's clear that this is a very special region.

But one star in this nebula has distinguished itself over the centuries: in 1843, Eta Carinae became the 2nd brightest star in the sky (behind Sirius), even though it's more than 7,000 light years away! (Sirius, by comparison, is less than nine light years away!)

So, with a brief, incredible brightening 160 years ago, does this star look particularly interesting today, as a result? 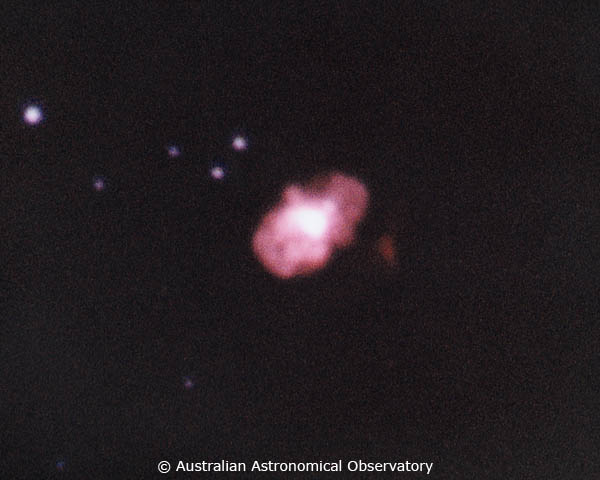 Back in the 1980s, teams from the ground were struggling to see what was going on with this star. The Australian Astronomical Observatory's effort, above, was really the best pre-Hubble image we got of what's going on. (For a deeper story, check this site out.)

But Hubble's first crack at it changed everything. 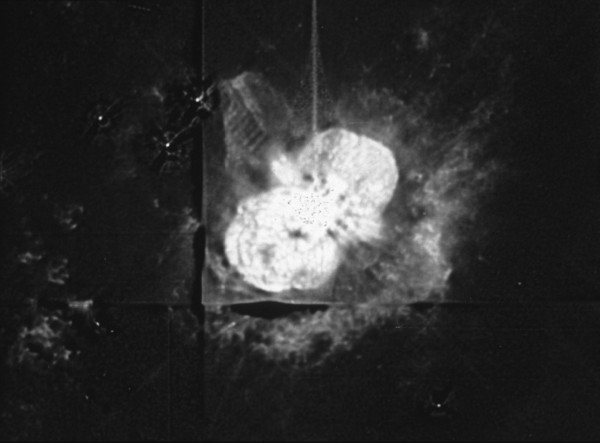 This 1991 image, taken with Hubble's primitivefirst camera and imperfect mirror, shows a very clear "double mushroom cloud" surrounding this star; likely the result of -- what else -- a tremendous nuclear explosion.

But the first Hubble servicing mission, in 1993, turned this telescope into the powerhouse we know and love. Here's what happened when Hubble turned its eye back on Eta Carina the next year: 1994. 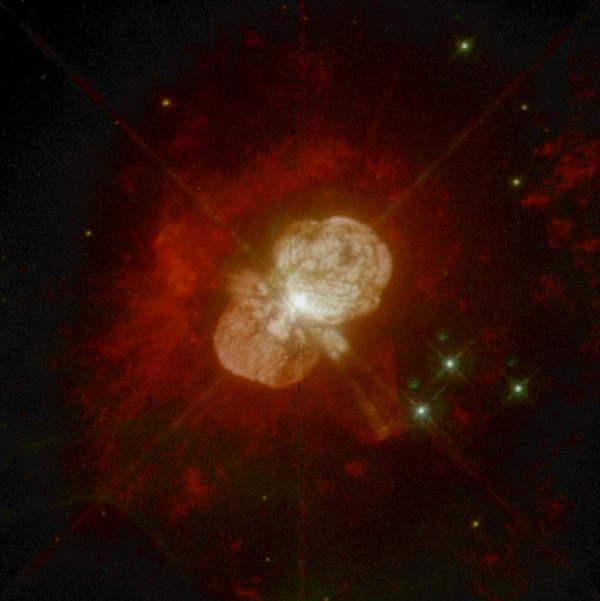 And that's why this is called the Homunculus nebula.

But Hubble's story with Eta Carinae doesn't stop there. It went after it once again in 1996, 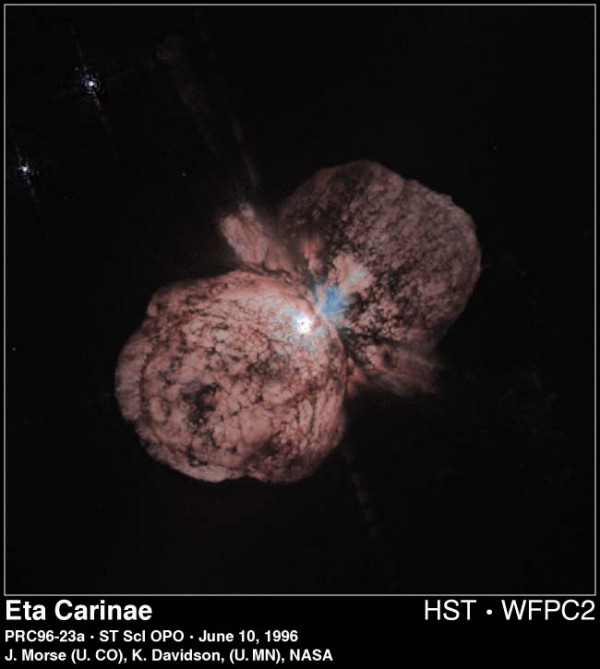 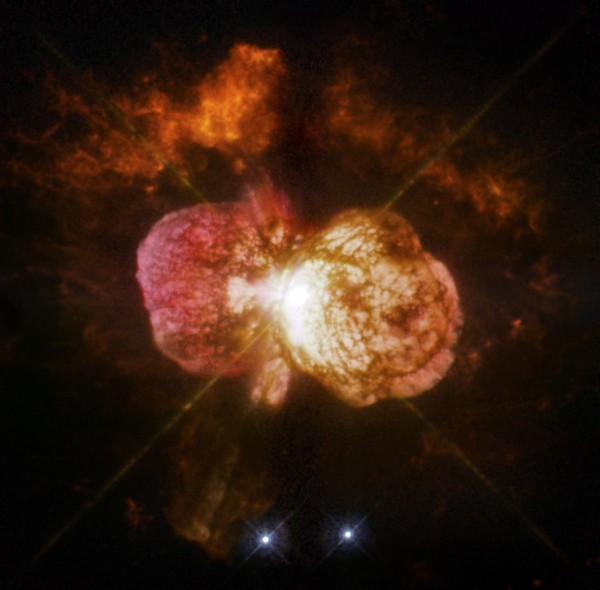 So enjoy the beauty of Eta Carinae thanks to Hubble!

Remember, it isn't like you can't get a beautiful picture of Eta Carinae and its surroundings from the ground. 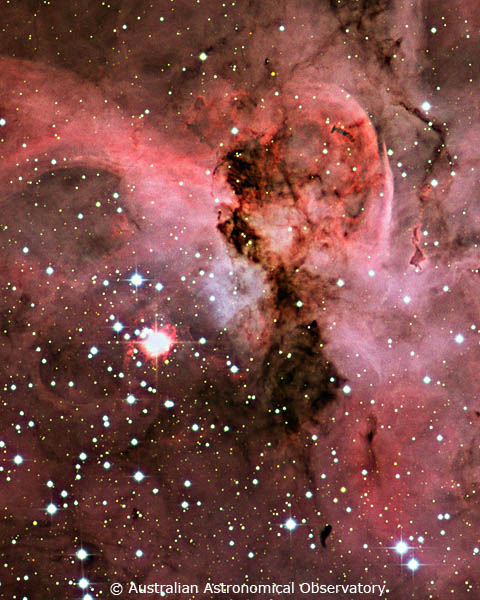 But the detail we can see thanks to Hubble? 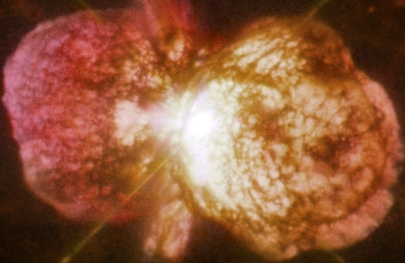 It's no stretch to say that it's absolutely changed everything. Enjoy!

How do we get the different angles? Is the nebula really rotating or is that an artifact of the digital processing?

It looks flipped and rotated between shots is all

re #4 and #5. From the posters' handles I was expecting some sort of religious screed... but Machine translations indicate some sort of football-related stuff. Certainly off-topic for this blog:

#4: Lacivertliler "Ozer HurmacÄ± and the injury lasts GÃ¼iza, who had surgery on the left great toe Gokhan Unal, Ugur Boral are not fully prepared for it with the staff in recent weeks taken by Big Colin Kazim and Fabio Bilica Aykut the Ankara" or gÃ¶tÃ¼rÃ¼lmedi.

What is that to the right of Hubble in the 1st photo?

How big are each of those clouds? If the massive star is the small bright spot in the middle, I'm guessing a few AU, but I'm not sure if that's right....

How do you do it, Ethan? Such consistently awe-inspiring posts. Thank you.

crd2-com. 7
Aye, good eye, that be the ghost of Christmas Hubble past.

Seriously though, I'm assuming the pic. is taken from a shuttle on a repair mission and the ghost image is a result from reflection of the shuttle window.

From Nasa;
The windows on the Space Shuttle are actually made out of aluminum silicate glass and fused silica glass. The orbiter windows are actually three different panes, there's an interior pressure pane because the pressure inside the orbiter is a lot higher than it is in the vacuum of space. We also have an optical pane that's installed in the middle that's about three and a half inches thick and on the outside, there's a thermal pane that protects the inside of the cockpit from the high heats of ascent and reentry.

BenHead (#8) - I think the mushroom clouds are much, much larger than that. Assuming a Hubble image is about 0.1 arcseconds per pixel, then that is about ~200 AU per pixel at 7000 light years distance. That would also make the nebula something like a few tenths of a light year across.

Here is some information from ESO that has similar estimates: http://www.eso.org/public/news/eso0336/

The Hubble Telescope is simply a phenomena!