Would you believe me if I told you that -- in terms of your own eyes -- you saw better at night than you did during the day? 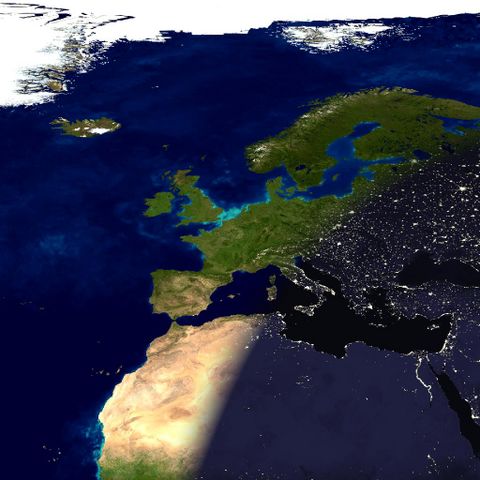 It's true! But it doesn't have much to do with the amount of light available. When you're looking out at distant objects, you'd love to be able to resolve them with your eyes. 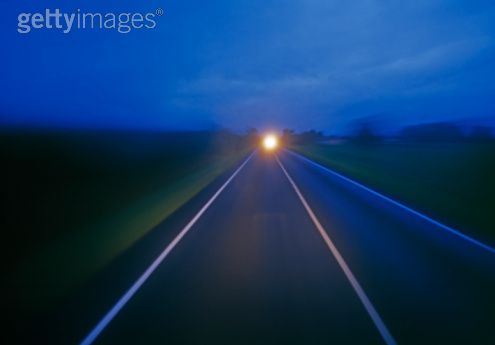 For example, that object in the distance, down the road in the image above? Is it a motorcycle with one headlight, a car or truck with two, or (I hope not!) a train with three? 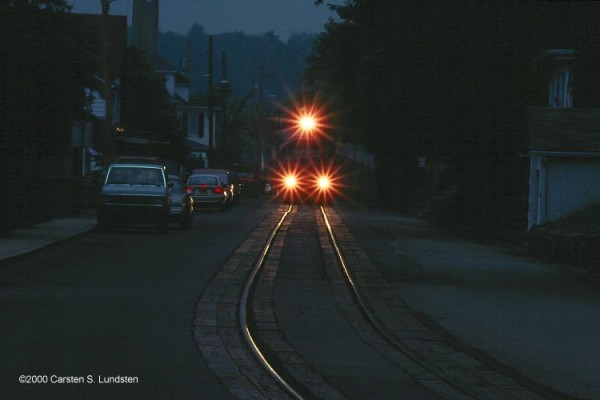 Well, with your eyes, there's a limit to what size you can resolve. Either you've got to wait for the object to get closer -- and that will help -- or, well, you can open your eyes wider. 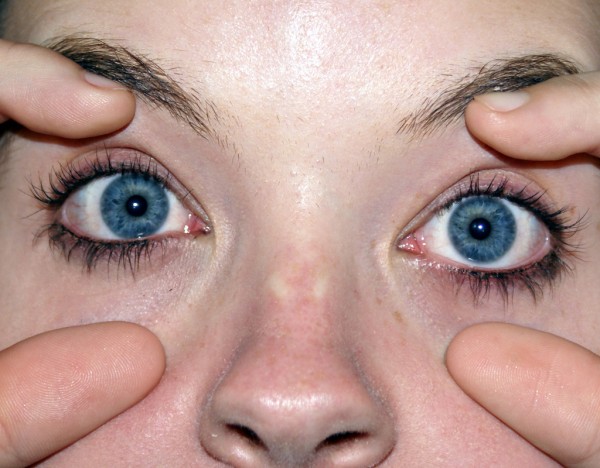 Not like that! I mean you need to let more light in to your eyes, and the way you do that is to dilate your pupils. You can accomplish this in a lot of ways, but the easiest way is simply to let it get as dark as possible, and your eyes will do this naturally. 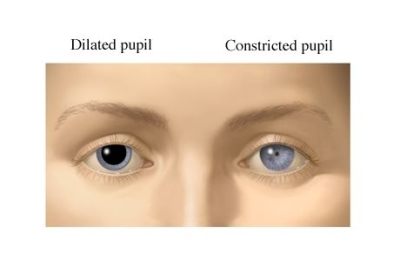 Conversely, when your pupils constrict, they let light in, and you can't see to as high a resolution. Amazingly, your eyes operate under the same principles as a telescope; the bigger the aperture, the better resolution you can get! 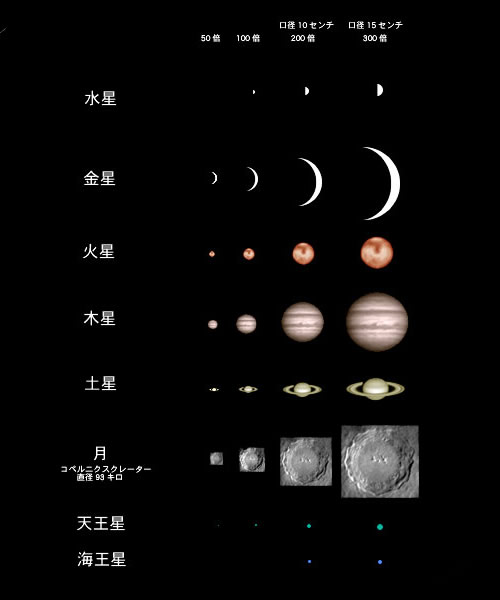 I can usually find illustrative images in English, but not in this case!

A young human can often dilate their eyes up to 9 mm in diameter, which is huge! (Some people can't get more than about 4 mm when fully dilated.) The other thing that matters -- again like with telescopes -- is the wavelength of the light you're looking at. Compare an optical telescope that you're used to with, say, a very long wavelength, radio telescope. 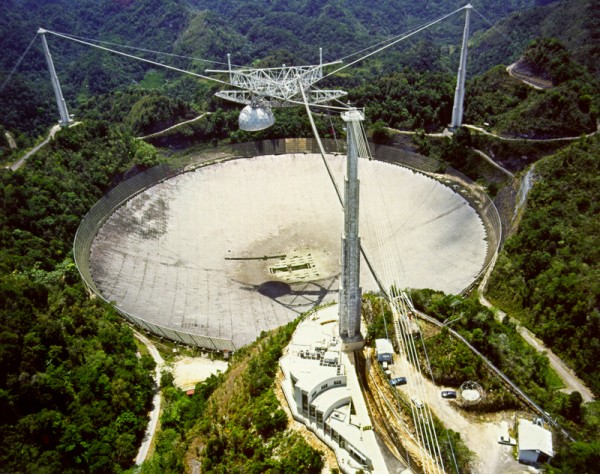 In order to catch the same number of waves of a longer wavelength, you need a bigger aperture! Since your eye can only get to a maximum size, that means you can see the shorter-wavelength light at a higher resolution than you can the longer wavelengths. 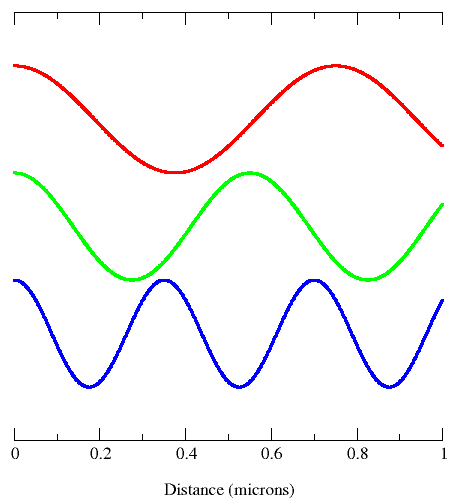 Someone looking at short wavelength (blue) light can resolve things nearly twice as well as someone looking at long wavelength (red) light! In fact, animals with large eye pupils and good UV vision can beat even humans as far as resolution goes. This includes some of the largest rats (!), many reptiles, and perhaps the best example of ultraviolet vision combined with large pupils: the owl. 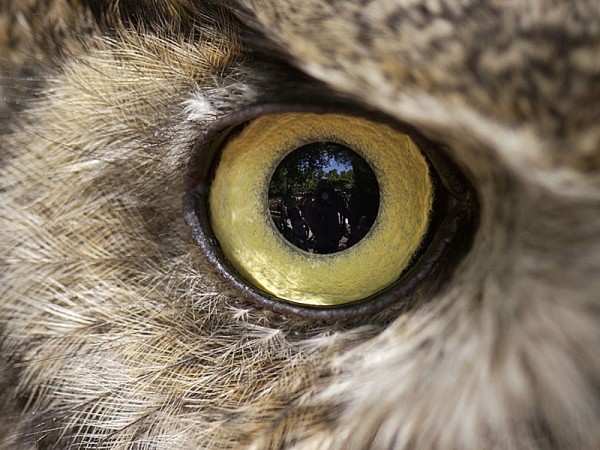 Put all the best things together -- a fully dilated pupil, the shortest violet wavelength light still visible by humans, and a perfect eye -- and you'll get a person that can see down to resolutions of twelve arc seconds, or one three-hundredth of one degree! 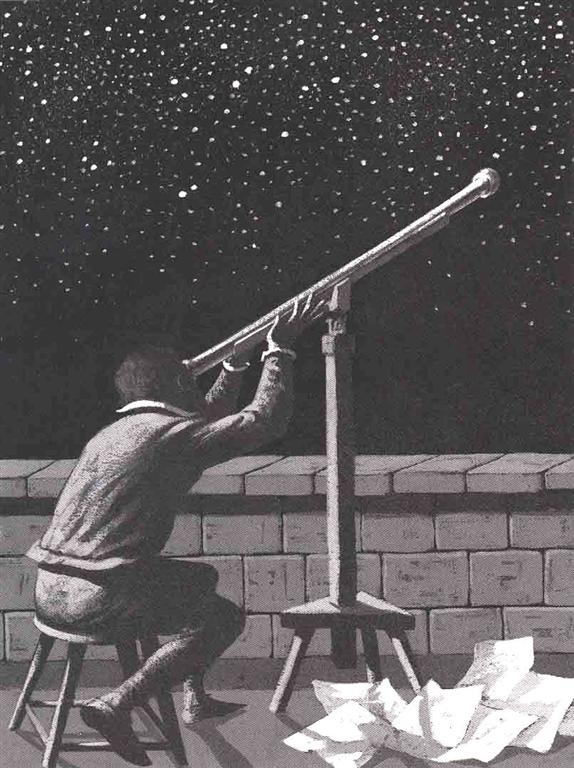 That's good enough to see the same things that a normal human would see through Galileo's telescope, including Jupiter's Moons, the phases of Venus, and craters on the Moon! Admittedly, the telescope is less expensive than the lasik and the pupil dilation, but your eye is an amazing tool. And if you want to see farther and at higher resolution?

Just turn down the lights.

I did not know this--thanks for the lesson! One thing I do know, however, is that there are drawbacks to a larger aperture. (Ask any photographer.) A larger aperture lets in more light but produces an image with less depth of field, which means the range of in-focus objects is smaller. If you've ever had your pupils dilated at the eye doctor (by an anticholinergic agent such as atropine), you know that it becomes hard to read until the drug wears off. Your eyes can't accommodate to focus on near objects due to the reduction in depth of field.

And a little trivia: atropine is an alkaloid extracted from deadly nightshade, Atropa belladonna (Italian: beautiful woman), which is so named because in the past it was used by women to dilate their eyes to increase their attractiveness. Pupillary dilation is part of sexual arousal so there is a likely connection there. My, what big eyes you have!

..IF nature wouldnt throw its wrenches in! The spatial resolution of scotopic (night-) vision is drastically reduced by the fact that the most sensitive photoreceptor cells, that is the "rod" cells, kind of share ganglion nerves amongst each other, whereas at photopic (daylight-) vision the corresponding "cone" cells are connected to one single nerve, thus allowing for much "sharper" pictures. Also, human night vision falls back to blue-greenish monochromatic one-color vision, as there is only one type of that highly sensitive rod cells - opposed to the three different not-so-sensitive daylight vision cone cells, with one type for each long (red), medium (green) and short (blue) wavelengths of light, allowing for trichromatic color reception! AND, as Tom mentioned in the comments, the depth of field is reduced by the greater diameter of the eye's iris, rendering a possibly (or physically?) increased resolution useless, since only a small portion of it would actually appear sharp! Nonetheless it's incredible how everything, physics and biology play together there.. but remember: it's not always the "megapixels" that matter! :)

Excellent article! Very informative. Could you please inform the credit of the image with words in japanese?
Thanks

Wait a minute....you said that the resolution is better with a dilated pupil. Why is it then that when we stop down on a camera we have greater depth of field and resultant improved image? People whose pupils dilate larger than normal typically have trouble seeing at night....due to greater amounts of peripheral aberrations entering around the edges of the larger pupil. Also, you can take a person with a modest uncorrected refractive error and render them 20/20 by having them look through a pinhole. This is exactly why uncorrected and undercorrected myopes squint....to create a smaller aperture.
It's true that dilated pupils allow in more light and expose greater numbers of peripherally located rods, however, I'm not sure you can say that the resolving power is greater under dilation. You will have greater sensitivity of your peripheral vision when dilated, but the actual resolving power is not high in the periphery.
Now, in a mirror telescope with a wide open aperature, it's true that there is more light gathering on the mirror and you can see fainter celestial bodies. Same is true with film or digital photosensors. Case in point is the recent accomplishment of Hubble being aimed for a lengthy time exposure at a "blank" piece of the sky....ended up resolving tons of never before seen objects.

For people with imperfect vision -- like me -- squinting and reducing aperture size reduces the distortion from more of the imperfect parts of the human optical system.

But if your eyes are perfect, then you'll want to open up your pupils as much as possible to let the maximum amount of distant light in when you're doing astronomy.

I have a half-applicable question. From the article: "Someone looking at short wavelength (blue) light can resolve things nearly twice as well as someone looking at long wavelength (red) light!" I have always noticed that at night, when I look at blue neon signs or blue LED indicators (my microwave's display, for example), I always have an exceptionally MORE difficult time seeing in the image with any clarity. This has always struck me as odd, as blue has a relatively short wavelength. Does anybody have any idea what an explanation would be? The "blurriness" does seem to be blue-specific.

I *totally* knew I could see better at night. But the way other people whinge about it, I thought I was just weird.

Someone can correct me if my trigonometry is wrong, but assuming a minimum object distance of 20 cm, that means someone with perfect vision could make out details as small as 12 microns--only slightly larger than the average eukaryotic cell, and smaller than a white blood cell!

@Ryan - I have this same problem - I find it very difficult to look at blue neon lights. Do you wear glasses? I always assumed that because my glasses are quite strong that light at different wavelengths is refracted at different angles, known as chromatic abberation. I can see this with pretty much any light source, but blue neon lights are the worst. If I look right through the middle of my glasses then it's not very noticeable, but if I look through closer to the edges then the distortion becomes more and more pronounced. Even looking at the right edge of my monitor, if i turn my head to the left it looks reddish, and if i turn my head to the right it looks bluish.

omg that picture of some one with blue eyes is the double of me!! is there any way i can find out who they are to see how much alike we actually are? please let me know!!

About what the commenters said. 1) As with most lenses, blue light is bent more in the lenses in the eye, red less. 2) Open the aparture or the pupil wide, then more fucusing power by the lense is needed to compensate to be in focus. Use a pinhole, and very little if at all a lenses is needed, but night vision is probably non existant due to simply not enough light. Overall the eye can accomodate. Focusing in low light takes more accomodation due to a larger pupil needed to let more light in. Blue light just bends more in the lenses so when you look at a blue light in a sea of color, the blue light will seem mildly out of focus. 3) Some may be thinking of resolution as an analog kind, ie blur or out of focus, vs. digital.