The Deepest Shadows in our own Backyard

"Life's but a walking shadow, a poor player, that struts and frets his hour upon the stage and then is heard no more; it is a tale told by an idiot, full of sound and fury, signifying nothing." -William Shakespeare

Ahh, the glorious shadows of our Universe. Everywhere that sunlight is blocked gives us shadow. 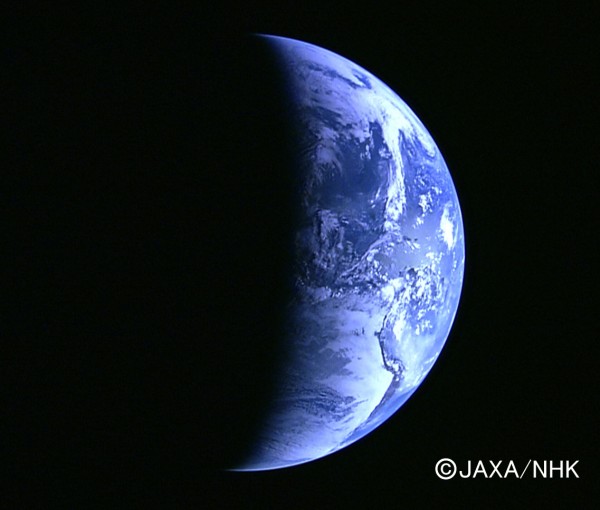 For the Earth, of course, this results in night and day each time the Earth rotates.

The Earth, though, is also tilted on its axis a significant amount, by about 23.5 degrees. When a pole tilts towards the Sun, it receives continuous daylight, while when it tilts away from the Sun, it resides in continuous shadow. 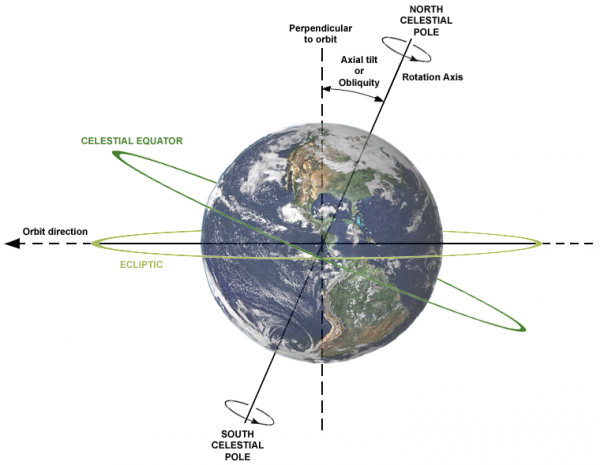 But is that true everywhere?

Welcome to the Moon, as imaged back in the 1990s by Clementine. The Moon also orbits, revolving around the Earth (which in turn revolves around the Sun), but also rotating about its own axis.

But the Moon is quite unlike the Earth, which rotates with a tilt of 23.5 degrees.

The Moon is tilted at a meager 1.5 degrees with respect to the Sun. Which means that there are practically no seasons on the Moon; all places on the Moon receive roughly the same amount and type of sunlight at all times of the year. 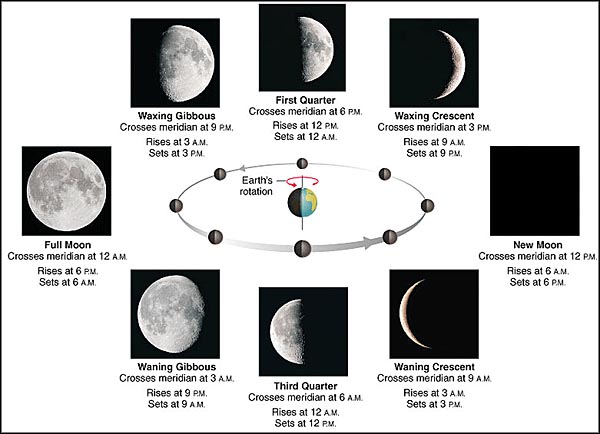 What does this have to do with shadows? Take a look at the new high-resolution mosaics of the near side of the Moon, 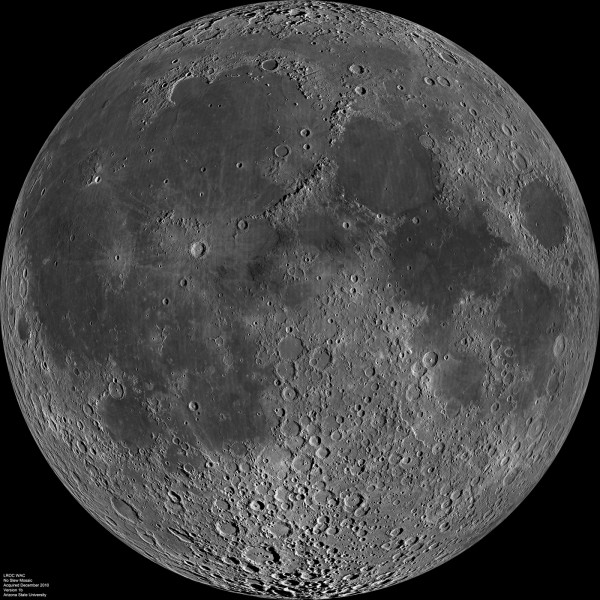 as well as the far side, 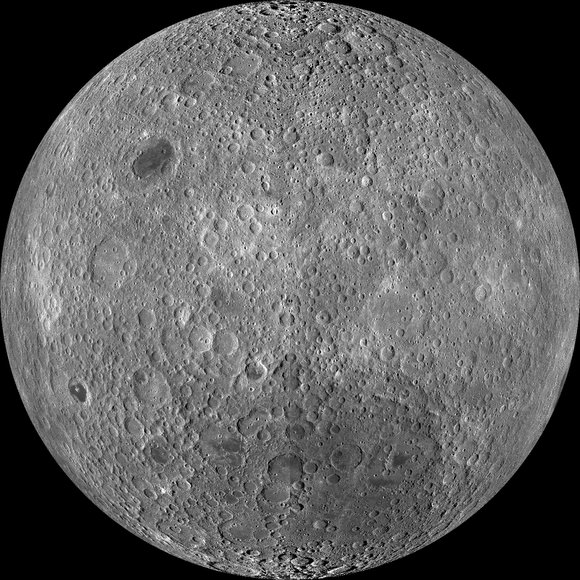 as imaged by the Lunar Reconnaissance Orbiter (LRO). You'll notice, of course, that the Moon is covered in craters.

Imagine the North and South poles of this Moon, if you will. If you lived there, you'd only ever receive glancing sunlight; the Sun would only ever appear to be 1.5 degrees above the horizon, at most. What does this mean for craters located at the poles?

We don't really need to wonder. LRO has created mosaics of the North (left) and South (right) poles of the Moon, and you can see the very suggestively "permanently shadowed" craters!

These are interesting, because once anything falls into them, including remnants from meteors, nothing ever warms them! No sunlight, no heat, no atmosphere, they simply cool and freeze. One of the remarkable things that's expected to be in these craters? Frozen water, a.k.a. ice! 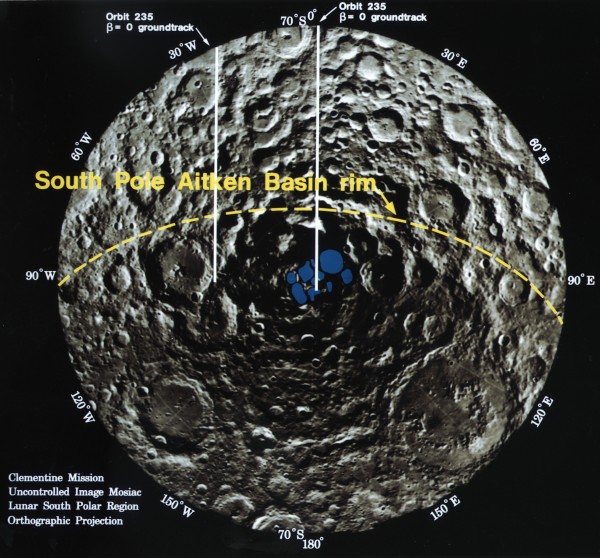 So what do these poles actually look like, if you fly over them? Well, that's as close to a "glimpse" of these deepest shadows that you'll ever see. And LRO has a beautiful flyover of the North Pole to show you!

What lies at the bottom of these craters? My money's on some very, very dirty ice, mixed with normal Moon-dust and rock, possibly similar to a glacier on Earth! Just another glimpse of something wonderful out-of-this-world, and yet right in our own backyard. Enjoy!
Tags
Astronomy
Solar System

I really enjoyed reading this short, informative post, Ethan. Thanks :)

I don't know if this is the right place to ask but...

What are your thoughts on Paul Steinhardt's article in the April 2011 issue of Scientific American: Quantum Gaps in Big Bang Theory?

When I looked at the figure showing the North and the South poles (Fig.8.), my first impression was that the craters were arranged along spirals, looking almost like the spiral arms of galaxies. Is there any reason for that or did I just have a lovely visual "hallucination"?

Orson Scott Card's Empire is a red-state vs blue-state American civil war based on the deep hatred of each other with no room for a middle ground. At the end of the audio book, the author gives his opinion of how such a war could come about with recent examples from civil wars in other countries

Put some headlights on that orbiter and lets find out! Jeez! :P

Is it just me, or does the far side appear to have more cratering? Huh, wonder why that would be...? :)

Why doesn't this polar ice sublime? Is it being replaced on a continuous basis? Even at very low temperatures, without an atmosphere, the vapor pressure of the ice would be very high.

Leon @2, Paul Steinhardt gives an excellent review of the successes of inflation. He also gives a reasonable account of the difficulties we have understanding the earlier stages of inflation. His conclusions about gravitational BB-modes (tensor modes) are suspect, and his attribution of our theoretical difficulties to evidence against inflation are also suspect. I have chosen not to comment on the article in a blog post.

Arrow @3, this "hallucination" you see has a lot to do with the fact that the Sun is at a different angle to the Moon in many of the images put together for the mosaic. Compare to the other image of the South Pole (below it) which doesn't show that spiral illusion.

Benhead @5, you should be so lucky to have such wattage on a spacecraft!

Theotherdoug @6, the far side is believed to have a thicker crust than the near side, which makes it more difficult for "maria," or the dark, smooth lava flows, to come up to the surface and cover over the cratering.

Rob (a chemist) @7, that is true for water-ice on the surface of the Moon. However, even a modest thickness, say of 1 meter, would take over a billion years to sublimate. See this paper for a source.

Ethan's reference is probably even overestimating the evaporation rate for ice buried even lightly in the regolith. Regolith is an extremely good insulator, only half a meter down for example the temperature is constant despite a 200 F day/night cycle. And the regolith also has a very high surface area, allowing for constant reabsorption of sublimed water molecules on the overlying material, preventing the escape and generating a locally higher water pressure than expected from strict thermodynamic data.

I got the same illusion.

Looking back at the polar images, I think it's due to the change in position of the crater wall shadows, which are not consistent across the picture.

I'd like to see the same area shown with different sun angles as overlays or blink comparisons to get a better idea.

I'm pretty sure the moon's North pole is where we will find the monolith (http://en.wikipedia.org/wiki/Monolith_%28Space_Odyssey%29).

Funny you talk about sun and shade on the Clementine mission. I helped generate the composite images you show and there was a lot of normalizing that had to be done because alternating strips of the maps were taken during full sun exposure and that reflected more highly than anticipated. The raw images look light then dark like a zebra's hide - so we had to apply some filters to get them to blend like you see.

Always thought that those craters would be a great place for a moonbase. You should at least have some protection from the Sun, and a source of volatiles.

I'd also assume that at the crater lips, you could put up a solar panel that would give 24/7 power..

They will be named unambiguously as '36-degree East Zone time,' etc., although 'Copernican time,' 'West Tranquillity time' and others may be adopted as convenient.

I m really speechless. Those picture were great.

How much would I give for the Moon to be facing us with his far side...