"None are more hopelessly enslaved than those who falsely believe they are free." -Johann Wolfgang von Goethe

"Change does not roll in on the wheels of inevitability, but comes through continuous struggle. And so we must straighten our backs and work for our freedom. A man can't ride you unless your back is bent." -Martin Luther King, Jr.

Whether you're someone who pays attention to the news or not, you are surely aware of the titanic struggles for freedom going on all over the world, from the United States to Libya, from Cairo to Kabul, from Saudi Arabia to Thailand. This weekend I've got a hip-hop song for you, from artist Brother Ali (whose story is quite interesting),

Freedom Ain't Free.
And while violence, resistance and oppression are the norms for these sorts of events, a new and remarkable type of revolution is occurring right now in Afghanistan. 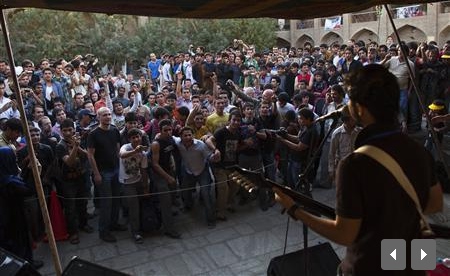 And it's occurring with guitars, not guns. On October 1st, just yesterday, live rock music was played in an Afghani festival for the first time in my lifetime! 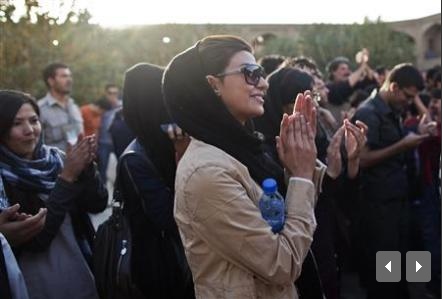 Sound Central, the Central Asian Modern Music Festival, started in mid-September and continues through October, is putting on live music concerts -- with both local and international bands -- in the countries of Afghanistan, Tajikistan, Kyrgyzstan, Kazakhstan, Uzbekistan, Turkmenistan, Pakistan and Iran. 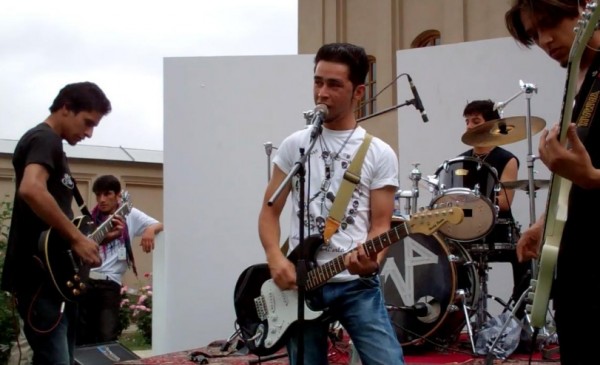 Image credit: Travis Beard, the organizer of this festival.

Particularly in Afghanistan, where music was banned by the Taliban for years, this is perhaps the first time that people in their 20s (and younger) will have to see, hear and perform live music. The so-called stealth festival is leaving an impression on many.

"This is the first time I'm watching music live, the first time in Kabul we've had something like this," says breathless 22 year-old Asil Ahmad. "Its one of the most unforgettable nights."

With genres ranging from pop to punk to heavy metal to electronica to folk, knowing that this is going on in brand new places in the world, this project has got to be having a tremendous impact on everyone who gets to experience it. 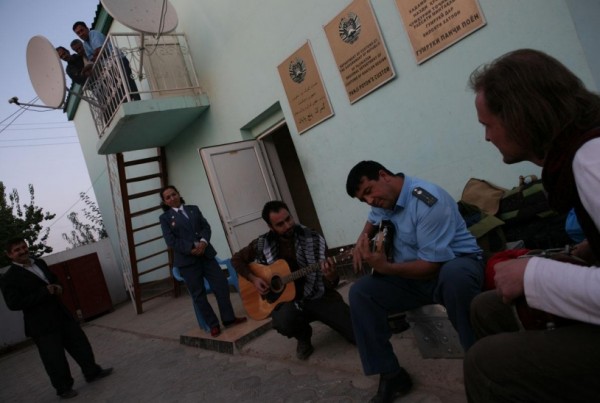 Not merely playing music for a crowd, the festival also aims to increase music education, and to set up programs where youths can access and learn to play various instruments.

There is a plethora of information about this movement here, and knowing that this is going on in the world has certainly made my weekend a lot brighter.

So I'm happy I get to share it with you, and I hope it does the same for you!

Kazakhstan, Turkmenistan, Uzbekistan, Kyrgyzstan, Tajikistan, Afghanistan ... they all have birds, it turns out. Until now there has never been a field guid to the birds of this regino. Raffael Aye, Manuel Schweizer, and Tobias Roth have written one, and it is called, fittingly, Birds of Central…

The Death of the Aral Sea

In the 20th century, society was either ignorant of, or ignored, the consequences of bad water management. The goal was economic development at all costs. Over the past few decades, we've learned about the ecological and social implications of the misuse of water, and some efforts have been made to…

Welcome.... to the world of sheep

As some of you now know, finally I have something that might be considered close to a dream job: I'm now a researcher for Impossible Pictures, the company that did Walking With Dinosaurs, Primeval and a host of other things (website here). This job isn't going to be forever, but it's a start, and…

The cover of the latest issue of Time is going to shake a few people up. Aisha is a woman who fled the tyranny and abuse of her in-laws, and as a punishment, the Taliban had her husband cut off her ears and nose. Here's where pro-war propaganda steps in: the cover is titled, "What happens if we…

This is really great news.
Thanks Ethan for bringing us this story.

Why fine arts are important for the mental evolution of a society? Expansion and development of musical expression helped discovery of the connection between mathematical ratios and musical intervals that is attributed to Pythagoras.

The Gregorian chants and the growth of polyphonic music in medieval European monasteries and cathedrals established the musical tradition and notes. The invention of musical notation enabled musicians to build upon the work of the past.

Without these there would be no Mozart or Beethoven. Yes, it makes no difference if a society does not have Mozart or Beethoven but a society that fails to deliver Wolfgang Amadeus Mozart and Ludwig van Beethoven also fails to deliver Copernicus, Galileo or Newton. A society that bans music and art resigns itself to humiliation of medievalism. The medieval mindset is the curse and nuisance which is innate and hereditary, it has to be broken for that is the only way the mind of man can be free from dogma and backwardness. He needs to rebel against the doctrine that embeds him in cohorts with desert norms that are comprehensively antiquated and archaic.

"On the Day of Resurrection, Allah will pour molten lead into the ears of whoever sits listening to a songstress."

Very great post, indeed like always as it is. It's what is expected from a real scientist who knows oneself as a part of the global community. We need this consciousness and responsibility in scientists to invoke political awareness besides their main scientific vocation, as an fruitful avocation. I do appreciate your political posts as well as your scientific ones. Good luck.

Thanks so much for posting this, Ethan. Makes my Monday happier by orders of magnitude. Also reminds me of what Fela Kuti said: Music is the weapon of the future.