Why doesn't our Universe have magnetic monopoles? (Synopsis)

“It is possible to commit no mistakes and still lose. That is not a weakness. That is life.” -Jean-Luc Picard

The electric/magnetic symmetric version of Maxwell’s equations, where both electric and magnetic sources (and currents) exist. Image credit: Ed Murdock.

But it could have been! Magnetic charges could move and make currents; a changing electric field could induce them; north and south poles could be separated an infinite distance. Magnetic charge could even have been a fundamental property of black holes. In 1982, Blas Cabrera announced the first detection of a long-sought-after magnetic monopole event, and the physics world went crazy. 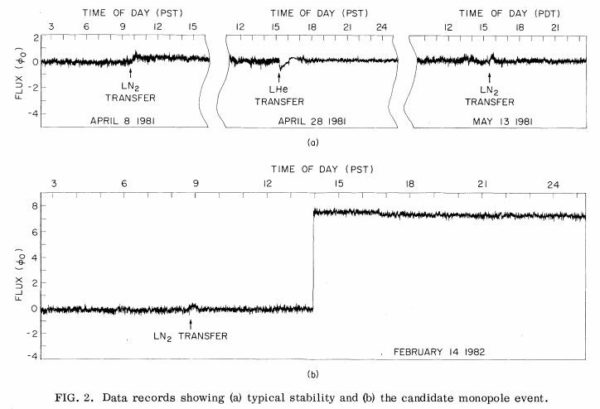 But nearly 35 years later, a second monopole has never been found. Despite our dreams, it looks like nature isn’t symmetric after all.

Ask Ethan: Could The Fabric Of Spacetime Be Defective? (Synopsis)

"Weakness of character is the only defect which cannot be amended." -Francois de La Rochefoucauld So, you’d like to ruin the fabric of your space, would you? Similar to tying a knot in it, stitching it up with some poorly-run shenanigans, running a two-dimensional membrane through it (like a hole…

Nature is not symmetric (Synopsis)

“It is possible to commit no mistakes and still lose. That is not a weakness. That is life.” -Jean-Luc Picard We like to think of nature as beautiful, elegant and infallible. Yet our notions of what's beautiful and elegant don't always line up with what reality gives us. Take the notion of symmetry…

(When I launched the Advent Calendar of Science Stories series back in December, I had a few things in mind, but wasn't sure I'd get through 24 days. In the end, I had more than enough material, and in fact didn't end up using a few of my original ideas. So I'll do a few additional posts, on an…

The Advent Calendar of Physics: Monopole!

As we march on toward Newton's birthday, we come to the second of Maxwell's famous equations, which is Gauss's Law applied to magnetic fields: For once, this is pretty much as simple as it looks. The divergence of the magnetic field is zero, full stop. As I said yesterday (albeit using the wrong…

Blas's candidate event is a really clean signal: just from the plot you show, we can estimate the noise uncertainty as about 0.15 magnetons (full width of baseline is about 0.5, divide by sqrt(12) to get RMS). The systematic error due to the LN2 changes is also less than 0.5. So the candidate signal is 8 +- 0.52, or 15.38 sigma.

That's about as close to "certain" as you can get. That is, it appears to my experience that the signal from the equipment is a real signal corresponding to a physical event, not noise or interference or something. But it's pretty clear from subsequent research that it probably wasn't a magnetic monopole :-(

In the 1982 paper, they used that one candidate to set an upper limit on the flux (assuming it's some sort of unexplained standard physics background) of 6e-10 /cm/s/sr.

Assuming the event is real, the flux rate (1 event in 151 days) is a few orders of magnitude higher than the "Parker Bound" (shown in the figure on the Forbes site) which says that too many monopoles would change the observed galactic magnetic field.

An interesting Nature paper from the following year (1983) suggested that you could circumvent the Parker bound if monopoles formed stable bound states, which would be split by Earth's (or the Sun's) stronger magnetic field.

Unfortunately, the other experiments sensitive to monopoles have all set limits far below the Parker bound, and millions of times smaller than the flux if the Valentine's Day Event were real.

The following theory link for photons requires magnetic mono-poles as a result of moving charges:
https://youtu.be/xPmNDQuufqY
at
www.mono-charges.com

Would the detection of an electroweak monopole bring troubles to theories like quantum-gravity or would it be a great step forwar for it ?