Why Star Corpses Go Green (and so will we!)

In January of 2006, the Hubble Space Telescope -- equipped with the greatest telescope camera ever designed -- took this detailed picture of globular cluster NGC 1846. 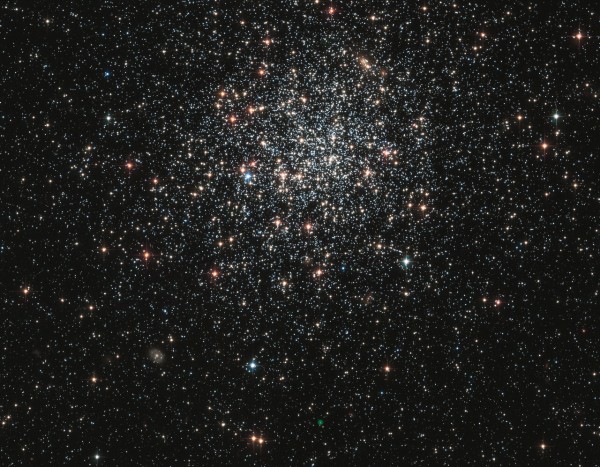 Like most globular clusters, this is a very tight, dense collection of perhaps a few hundred thousand stars, contained in a roughly spherical region just a few light years in size. Unlike most of the globular clusters we know, this one is not located within our own galaxy, but instead is about 160,000 light years away in the outskirts of the Large Magellanic Cloud.

And like all the stars we're familiar with, this globular cluster contains a great many of the great varieties that star colors are allowed to come in: from hot, blue stars to white ones, to cooler yellow, orange, and even the coolest type of all, red stars. But if you look closely, you'll see something in this image that ought to puzzle you terribly: a green-looking object. 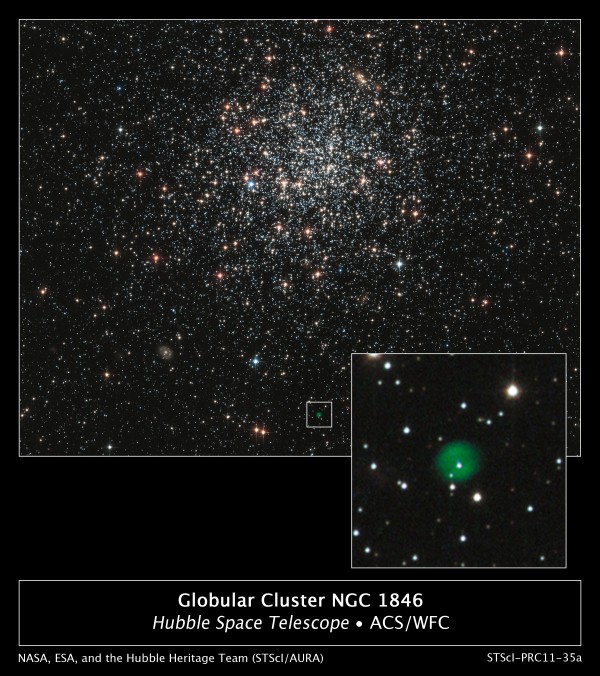 Now this should bother you, because there is no such thing as a green star! And while astronomical objects are often falsely-colored in order to maximize contrast and visibility, this is not one of those times, and this object really is green.

So what's going on here? Believe it or not, if we want to understand it, the best way to show you is to take you up in orbit around the Earth.

As you watch the video, you'll of course notice the Earth's cities, the clouds, oceans and land masses, and the occasional spectacular aurora. But what I really want you to look at is the atmosphere over the horizon when there's no aurora present. What you'll see is a greenish haze (possibly with red mixed in), known as the airglow. 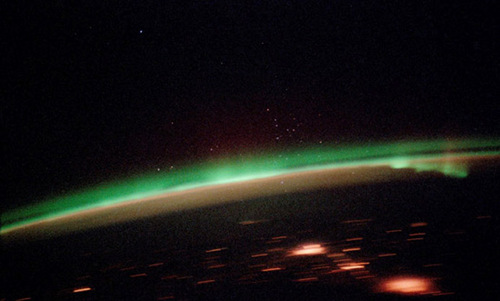 What causes this green glow? Believe it or not, this is caused by oxygen atoms cooling down in the nighttime dark, shielded from the Sun. From the International Space Station, this was the view as the final US Space Shuttle mission -- Atlantis -- returned to Earth. 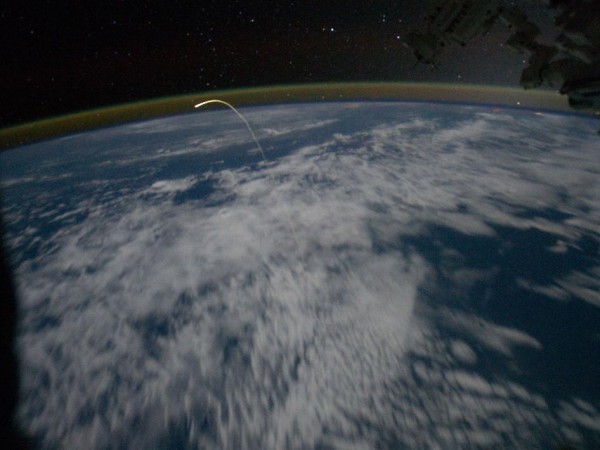 How does cooling oxygen do this? Like all atoms and molecules, oxygen has a wide variety of energy levels that its electrons can live in. When Ultraviolet light from the Sun comes in and hits the oxygen atoms, some of it is at just the right wavelength to excite its electrons into one of the highest allowable states, in some cases even partially ionizing it.

But when this Ultraviolet light source goes away, hidden by the intervening Earth during the night, those excited electrons drop through the allowable energy levels, emitting a wide variety of photons at very particular wavelengths. 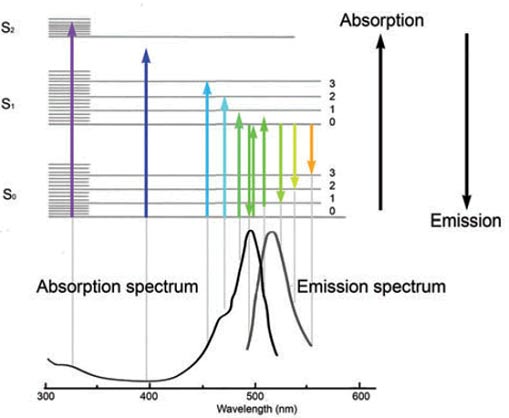 This physical process is something you've heard of before, even if you don't recognize it by its description: fluorescence. These wavelengths are the same for every single atom or molecule of oxygen in the Universe, as they're all governed by the same laws of quantum physics.

And what does the emission spectrum of oxygen look like? 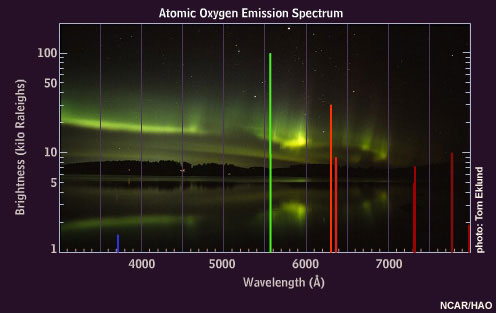 For atomic oxygen that absorbs Ultraviolet light, the strongest emission will occur at a wavelength of 558 nanometers: the very strong green line above!

It's no coincidence at all that this is exactly the dominant wavelength of the green "halos" around dying or recently deceased stars that we sometimes find in planetary nebulae! Have a look at NGC 7009, below. 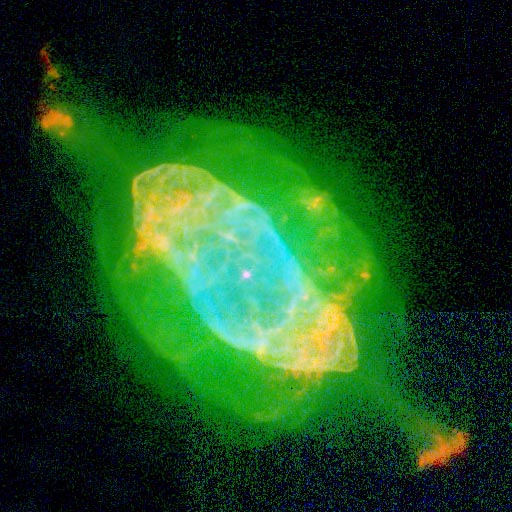 Image credit: Bruce Balick, as is the one below.

There are a great many other colors as well, as oxygen is hardly the only element present in planetary nebulae. But when oxygen is abundant, its green glow is unmistakeable, as NGC 6826 shows as well. 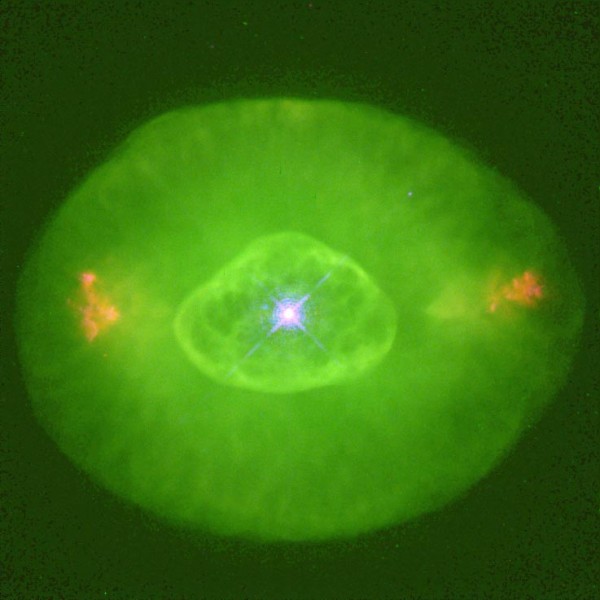 Of course, not every planetary nebula has a strong oxygen signature: some don't, like the Ring Nebula (below, left), but some do, like the Dumbbell Nebula (below, right), with its mix of oxygen and hydrogen.

So when you see that green glow coming from what looks like a very diffuse star, you'll know what that is. That's not a star, it's the oxygen, blown off from the outer layers of a star -- much like our Sun -- that's burned up the last of its fuel. The ultraviolet light that permeates the nebula excites the electrons in the oxygen atoms, and when they transition back down, that green glow we see comes from those oxygen atoms fluorescing. 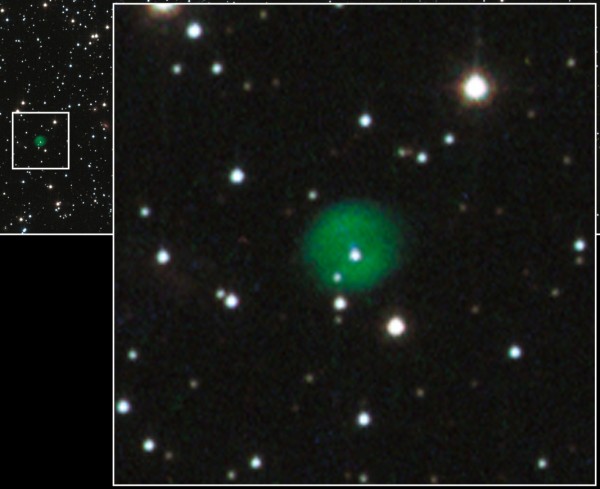 And -- from 160,000 light years away -- that's exactly what we're seeing. Enjoy the brilliant green glow from beyond our galaxy, and know that someday far into the future, our Sun will look an awful lot like that. The green color tells you it isn't a star, but the halo of oxygen tells you it used to be!

My first message to you Ethan after months of following your blog: thank you! I feel like Cosmos was my Astrology 101 course and that blog is my 102... :-)

You should propose a movie of this. It's bound to get green-lit....

You should recycle this post on St. Patrick's Day.

I think, for completeness, you should have included the recent Galaxy Zoo stuff -- Hanny's Voorwerp and the Green Pea Galaxies.

The underappreciated sequel to the 1941 John Ford movie:

How Green Was My Nova.

Was it super, NJ?

(extra internets for responding with "yes it was, thanks for asking", which even scans correctly in the song's tune.)

The picture shown above, "view as the final US Space Shuttle mission -- Atlantis -- returned to Earth", sure is interesting in several ways.

Could someone please provide a corresponding "orbital chart" to help clarify just what that picture is showing and how it was taken? TIA.

Great explanation on the green "star", but you should read the explanation of the atmospheric night glow phenomenon provided in Astro Bob's link; it describes it as a chemoluminescence process, not fluorescence (which typically has a lifetime in the nanosecond range).

Sorry Mu, check Wikipedia.
Chemo involves two chemical reactants, whereas fluor is absorbed from a higher energy source and then emitted at a (usually) lower energy level, ie longer wavelength. So it is direct energy absorption from solar UV radiation by electrons in a single element, in this case oxygen.

So the use of the term fluorescence is correct, IMHO.

Ref. last space shuttle descent:
Although it may be due to foreshortening, an effect of perspective, the descent orbit is far too abrupt to be the real one; as it essentially passive; ie no retro-rockets a la LEM.
It should be a more shallow angle of descent, so as to keep the absorption/emission of the energy due to the braking effect of the atmosphere to a level which the heat shield can handle.

I would suggest that instead it is the ascending shuttle we see in this photo, and the trail is that of the ascent rocketry.

BTW, this keeping of an exact angle is mission critical.

As for the main point of it all....WOW Makes you feel small but glad to be part of such a grand show. For whose enjoyment from afar?

Yes, interesting (and I loved seeing e.g. the ring nebula IIRC, in a 10" around 80x and noting the beautiful greenish color) and correct in practice, however: it really is possible, just unlikely for "incidental" reasons, for an incandescent object to glow green! Few know, and most physicists forget or didn't get clear coverage, the following: thermal emission relative to BB maximum curve varies per absorptivity at each wavelength. Right, not per some average etc. The star colors we hear about and usually seeâ¡ are based on BB spectral curves.

We hear of black bodies, reflective bodies, "grey bodies" w.r.t. thermal emission, but what about purple bodies? Given high absorption in green and much less in red and blue, then if the body could maintain that absorption profile (I think that's a big "if"), it should glow emerald green, like a green traffic light, at around 5000-6000 K.

The reason we don't see green glowing embers etc, is that almost all materials can't maintain such an absorption profile at high temperatures - not for theoretical reasons! However there are some subtle deviations from pure BB/GB spectra, which metallurgists traditionally took advantage of. And for example, I hear that molten gold can have a purplish tint at certain temperatures (uh, hard to get a ring-side seat!)

As for stars, I suspect e.g. that H-Î± emission makes them a bit redder than they "should" be. Note that "red giants" are about the temperature of incandescent light bulbs but seem redder (yet see note below re atmosphere.) Just FYI

â¡ (albeit somewhat yellowed by the atmosphere even at zenith - another little-appreciated adjustment, hence our Sun is really more greenish white and not "yellow" - check those "6000 K" fluoresent lights, and the Sun in space is effectively 5700 K - ?. I think in typical atmospheric conditions even overhead, we actually get about 5000 k off the "disk" itself, more in high dry conditions.)

What about Zubeneschamali? Yes that's a real star name - the Bayer designation is Beta Librae :

Incidentally Zubeneschamali is very close in the sky to Gliese 581 a nearby red dwarf that hosts one of the more interesting exoplanetary systems with worlds suspected of being possibly habitable at least at one stage.

Plus there's Antares B and several other binary star components that are often veiwed as green or green-ish too. Star colours are subtle but they are there - incl. just a few emerald examples.

A recent tool that has been adopted into NASA and its various missions is the pulse oximeter. A pulse oximeter, also known as a pulse ox by some medical professionals, is a medical device used to measure the blood oxygen saturation and pulse rate of individuals. These are important factors of the human body, because they provide data that can be used to determine how efficient the lungs and heart are at any given point of time.

As for the main point of it all....WOW Makes you feel small but glad to be part of such a grand show. For whose enjoyment from afar?