It's Coming Right For Us!!!

"Events are the ephemera of history; they pass across its stage like fireflies, hardly glimpsed before they settle back into darkness and as often as not into oblivion. Every event, however brief, has to be sure a contribution to make, lights up some dark corner or even some wide vista of history... illumined by the intermittent flare of the event." -Fernand Braudel

The spectacular event of the day, however, isn't something that started on Earth. Rather, 93 million miles away, it was our Sun, early yesterday morning (about 38 hours ago as I write this), that had a brief... shall we say... outburst. NASA's Solar Dynamics Observatory got the best view of this event as it happened, looking in extreme ultraviolet (13.1 nanometer) light, and collapsed the one-hour flare into a meager seven seconds.

What you just witnessed was a relatively powerful Solar Flare, at class M8.7. (M is the second highest class, behind only X.) While it's nothing compared to the biggest ones we've recently seen, Solar Flares can occasionally spell trouble for us here on Earth. 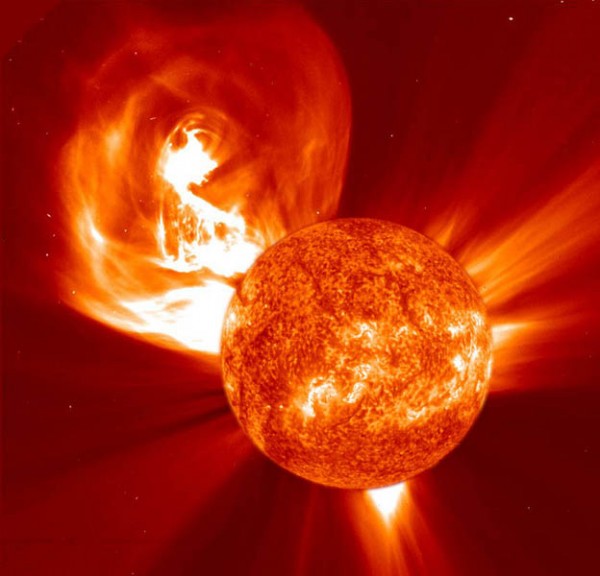 Why's that? Because Solar Flares are often accompanied by Coronal Mass Ejections (CMEs), as shown above in this 2002 SOHO image.

So what's so special about yesterday's Solar Flare? 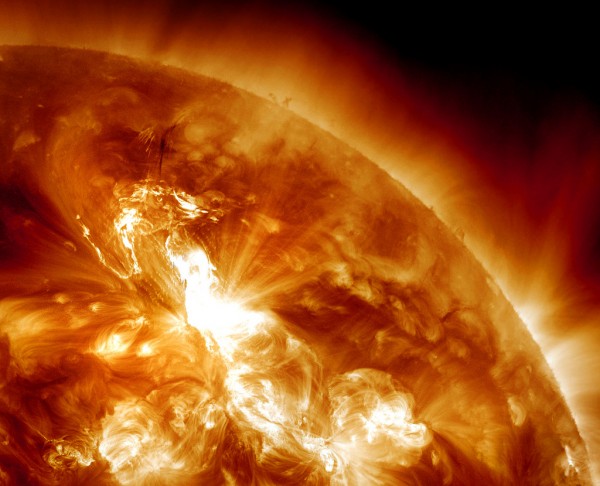 Image credit: NASA/SDO and the AIA consortium. Edited by J. Major, retrieved from flickr user Lights In The Dark.

This Solar Flare produced a CME directed towards Earth, and since it's moving at around a whopping 1,000 miles per second, that means it's arriving... right around... NOW!

That's right, the largest solar storm since 2005 is going to hit Earth today/tonight, particularly right at the edge of the Northern Hemisphere! Here are a bunch of time-lapse views of the flare from the Sun from a number of different satellites, courtesy of space.com.

As you can see from the blue video (NASA's SOHO Satellite), there was a coronal mass ejection, followed by intense speckling on the satellite. (Did you notice that?) It turns out that that is the reason we really care about this!

A coronal mass ejection is when this heated plasma stream of electrons, protons, and heavy ions gets launched out of the Sun in a random direction in space. This charged radiation can totally do some damage to electronics; that's what the speckling you saw was! (There's a nice explanation and video by Phil, here.) What about you, you may ask?

You are fine. Know why? Because of this. 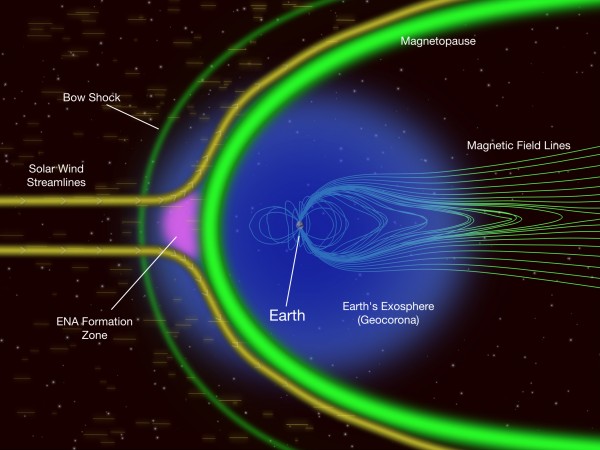 The Earth's magnetosphere protects us from this radiation! The magnetosphere bends the charged particles that would strike most regions of the Earth away from the equatorial regions, and funnels them only around the polar areas. As the particles come down towards Earth, they interact with the atmosphere, which does an excellent job of stopping them before they ever make it to the surface. In fact, this particular CME will mostly miss the Earth (remember, Earth is tiny on the scale of the Solar System), flying over the North Pole. Still, our magnetic field will bend some of these charged particles into the Earth's atmosphere! Know what that produces? 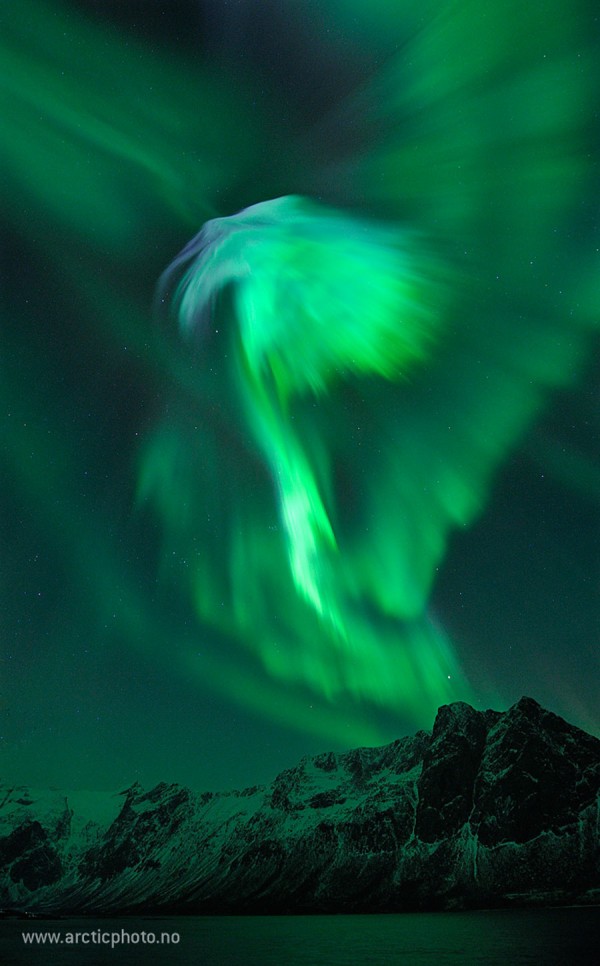 The Aurora Borealis, or the Northern Lights! (If the flare had been below the South Pole, we'd have gotten the Southern Lights, or Aurora Australis, instead.) Anyone with clear skies in the Northern Hemisphere should go and look for them tonight; we don't know how far South they'll be visible, but even places that very rarely get aurorae might be in luck tonight!

You know who's going to get the best view?

Astronauts on board the International Space Station! You might be worried that the astronauts on board would not be shielded by the magnetosphere, and so would be in grave danger from a coronal mass ejection like this. After all, at 240 miles above the surface, there's no atmosphere to protect them by absorbing all the protons, ions and electrons!

So what does that mean; do the astronauts absorb this radiation directly? 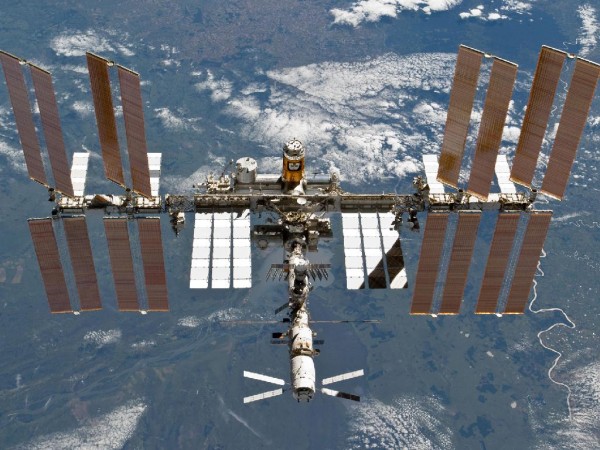 No, the ISS has a hull designed to shield them from this type of radiation. As this Universe Today article details, everyone and everything on board the ISS will be totally safe. In fact, any well-designed satellite will have shielding against the radiation from CMEs; the only pitfall is that most of them -- including GPS satellites -- were built cheaply, and don't have this type of shielding. That's the only type of danger from a flare / CME like this.

Yes, it's true that tremendous solar storms can be problematic, particularly for large power lines, plants, and grids, but this is not that storm. But the coming aurorae?

As Teri Hatcher would say, "they're real, and they're spectacular." Get out there tonight if you've got clear skies and have a look. Good luck!

You can bet yer butt I'll be out there if the clouds cooperate!! Thanks Ethan!

I have a friend who claims that the warm temperatures in Maine last night was caused by the CME. I tried telling him that a 20 difference in temperature (average vs actual) would be so much energy that it would be like daylight.

Is there any place that debunks the CME -> warm weather meme out there? Unfortunately, I think folks latching on to CME as a cause are doing so to avoid the other obvious possibility.

Can I suggest that it would be more useful to given an approximate time and a stated timezone, than leaving readers to guess what "today/tonight" might refer to?

First Thanks for educating me and sharing some sun excitement.

I think I got those nits right; or my mind is playing tricks.

Thanks again, great pictures and great explanation; just amazing that we can observe and understand such stuff.

You would think "today/tonight" might mean that it will be "today" in the later timezones (USA) and "tonight" in earlier timezones (Asia).

Not very useful information, really, though.

Dave @1, it's very hard to predict how far south the aurorae will get; latitudes in the 60s are certain, latitudes in the 50s are probable, but the 40s and 30s? We'll have to see, but I'm hoping we get lucky.

MobiusKlein @2, I have never heard of this before, but I cannot imagine a mechanism that would explain this.

Simon @3 and Vince @5, it has already begun, and will likely continue for hours. Europe should be able to see it now, Greenland will likely get it for a few hours after sunset, and the US / Canada may get it in the early part of the night.

OKThen @4, I do not have those problems in any of my browsers. Clear your cache, restart your computer and try again? Or maybe don't use ie (the only one I can't check)?

You were correct; restarting my computer solved the problem. I use Google Chrome.

I'm glad it was my problem and not yours.

But sorry about that, next time I'll restart my computer.
Though thanks for diagnosing my computer problem.

Ethan @2, I also never heard of this before my friend made the connection. Had to google it, and found some conspiracy sites promoting the idea.
search 'CME causes heat waves' and see low grade crankery.

I suspect it will become a meme to explain why it's hotter in the winter now, because it surely can't be global warming. I just hoped it had been debunked somewhere already.

How quickly news agencies forgot the bigger ones from 2011.

Mutations in organisms usually come from external radiations during some DNA copying process. If the poles of Earth receive more radiation than anywhere else, then on geological scales, the rate of mutation of polar species should be faster. Does anyone know more about this?

does anyone know if they will happen again tonight and what was the furthers south reported for last night?

Here's an aurora forecast from University of Alaska Fairbanks Geophysical Institute (click on the map appropriate for your location):

Also, there is a list server at this site where you can sign up for email alerts.

I live far enough north in the continental US for a potential sighting last night, but unfortunately a large H2O nebula rolled in at sunset.

does anyone know if they will happen again tonight and what was the furthers south reported for last night?

Search for University of Alaska Fairbanks Geophysical Institute aurora forecast. I posted a link in a previous comment but for some reason it got snagged by the moderation filter.

The Aurora Borealis, or the Northern Lights! (If the flare had been below the South Pole, we'd have gotten the Southern Lights, or Aurora Australis, instead.)

Actually, although the two auroral ovals *look* separate, they are intimately linked to one another, and recent satellite observations have managed to confirm what had long been suspected; they are broadly symmetrical, and when one flares up, so does the other one. (They aren't exactly symmetrical; both are too active and chaotic to exactly match one another. But major movements do get echoed.)

You can watch both auroras together via the POES satellite constellation:
http://www.swpc.noaa.gov/pmap/

First off Ethan, I just wanted to say that your blog is entirely excellent! For someone like me who loves understanding everything scientific possible but unfortunately has the attention span of a gnat, it's a veritable treasure trove. You manage to concisely explain every topic (and pictures! lots of pretty pictures! everyone loves pretty pictures) in easy to understand snippets, without blabbing on or over-simplifying. Well done you.

I actually wanted to ask: living in Australia I've never seen either aurora. Whenever I've seen video of them, they appear to be whipping across the sky at great speed (like in that beautiful one from Terje SÃ¸rgjerd that you posted), but it's obviously time-lapse photography/video. So what at what speed to they actually move across the sky? The visual effect, I mean, not the individual particles.