I've got to leave / It's time for a show

Here I am / Rock you like a hurricane!" -The Scorpions

It isn't just Earth, of course, where these great cyclonic storms occur, whipping across the planet and wreaking havoc as they rage above the surface. Most famous, perhaps, is Jupiter, whose great red spot has existed for as long as we've been able to see at the necessary resolution.

But one doesn't often think of Saturn when it comes to devastating storms. 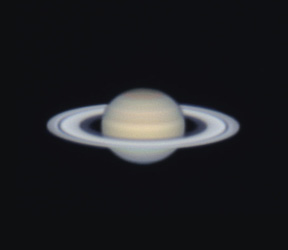 Saturn, quite famously, is a great gas giant planet, second only in size to Jupiter in our Solar System, and renowned for its spectacular rings. And although Saturn's rings are its most obvious feature, the clearly defined, featureless bands along its different latitudes also stand out.

Unless, that is, you've taken a close look in the last year or so. 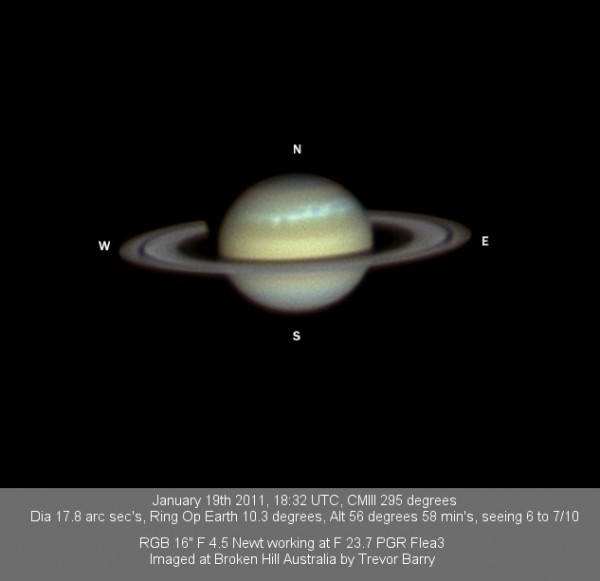 That is not a featureless band up there in Saturn's Northern Hemisphere!

Quite to the contrary, this is a virtually planet-wide storm plume, whose core is a 3,000-mile-wide thunderstorm, kicking up beacons of warm air and leaving behind ammonia ice crystals, which we can tell from Cassini's observations in the infrared. 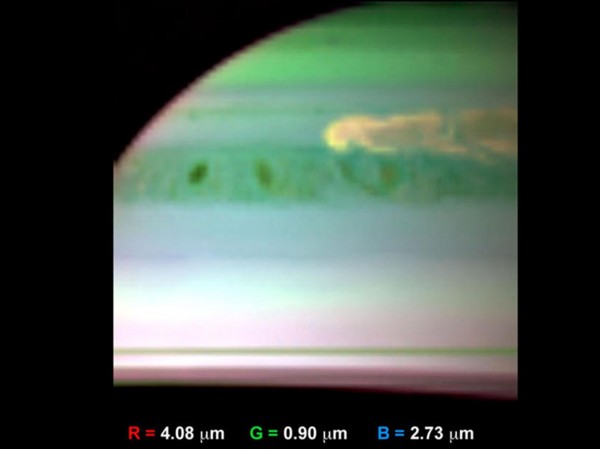 Cassini, the famed Saturn spacecraft that's been orbiting our ringed neighbor for nearly a decade, first spotted this storm in the earliest stages of its infancy, all the way back in early December, 2010. I've highlighted it, below, visible right at Saturn's terminator. 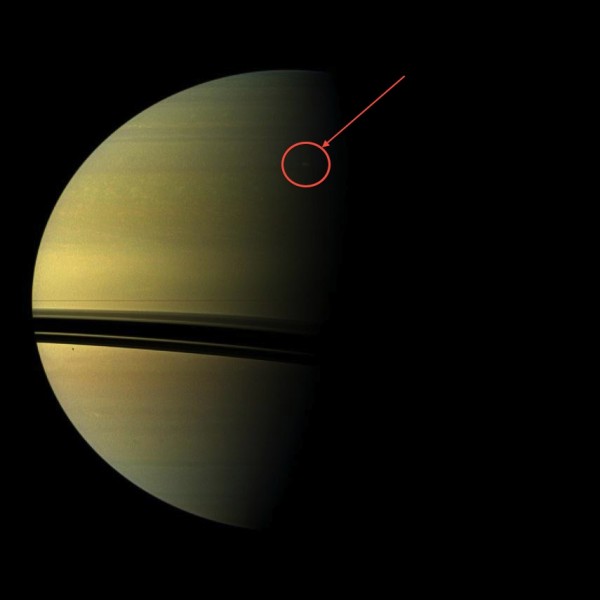 Unlike storms on Earth, which typically last for days or -- in particularly devastating cases -- a few weeks, this storm on Saturn has set a new record. 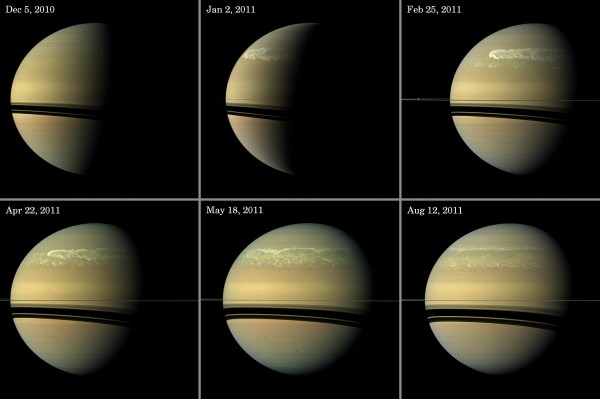 As you can see, it was so powerful that, from February to April, the storm actually lapped itself, with the head of the storm clearly visible in those images.

What you might not realize is that Cassini was also able to clearly identify the tail of the storm, by looking in the infrared! Below, in false-color, the red-orange methane clouds are topped by a high blue haze signifying the main end of the tail. (The rings also appear in blue as a thin line, as there is no methane there at all!) 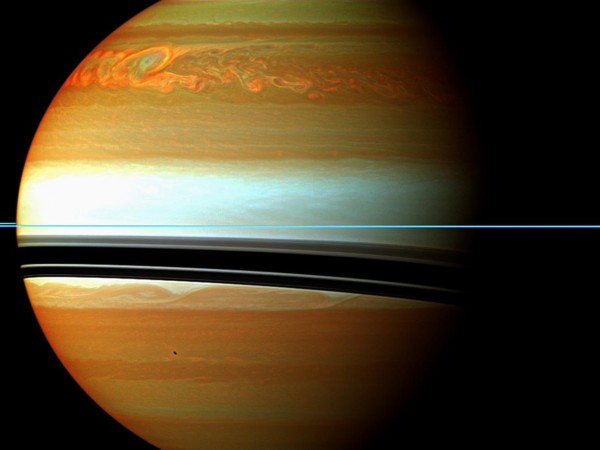 Although this is all that NASA released, Cassini is a bit of a special mission. You see, they have a publicly accessible imaging diary over at Cassini Imaging Central Laboratory for OPerationS (CICLOPS).

Want to see how the storm changed from one (Saturnian) day to the next? Taken 11 hours apart, from February 23rd, 2011 to February 24th, you can really see that -- at a scale of 64 miles (104 km) per pixel in the below image -- this giant hurricane is migrating across the face of Saturn at around 100 km/hr!

And finally, what can Cassini do, at its highest resolution in (nearly) true color, looking at the storm as it traverses its own wake across the planet? Click on the image for full-resolution, but even at its reduced screen resolution... well, see for yourself!

You can follow the entire saga of the Saturn Storm Chronicles' report on last year's record-breaking display over at CICLOPS, but what an amazing view from Cassini!

That is incredible, thanks for a sharing.

Magnificent. Thanks for this - great write up, breathtaking images. Love it.

I note you tackled the heavy lifting of debunking the Rossi e-cat back in December. I'm a little late to the party, except Rossi is still out there slinging BS with the best of them.

You've done your usual good job explaining the actual science behind Rossi e-cat device and debunking it from a position of actual authority (that I lack).

I have used my own personal skill-set to evaluate these claims. The beauty of my analysis, vis-a-vis yours (which I agree with btw) is that those folks lacking a nuclear background will find it much easier to digest.

As an aside to this highly intelligent audience, it's my usual tongue-in-cheek sarcasm. I thought of going full out POE, but resisted the urge.

Fazillion compliments for this blog entry! I just couldn't believe the last photo - so detailed, colorful, never-ever-ending-spectacular-whoaaa! Breath-taking! Makes me think again about the beauty - and the scales! - of this universe we live in...
Thanks for your work!

The last image looks like it came from the brush of Picasso.

Any chance that this storm was created through impact? Did you say there was presence of methane that doesn't exist on Saturn?

That would make a great necktie! JPL or NASA should license a whole series of "GalacTies", proceeds going to our ever-shrinking space budgets. (I'll ask only 10% for this brilliant idea.)

An artist could spend endless hours creating a series of Saturn-storm paintings based on these images. Thanks for letting the rest of us in on the news from Saturn!

I can see the face of Jeebers! And Carolyn Porco, and the Queen, and....

Thanks for an astounding story!