Down the barrel of a thousand cosmic cannons!

"If we knew what it was we were doing, it would not be called research, would it?" -Albert Einstein

Our galaxy is but one among hundreds of billions in the cosmos, nearly all of which contain supermassive black holes at the center. Ours happens to be "only" a few million times as massive as our Sun, as well as quiet. 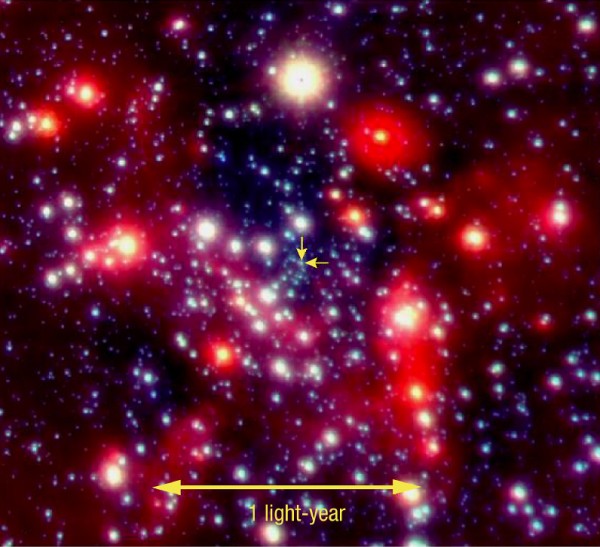 In other words, our galaxy's supermassive black hole is behaving right now, by not viciously shooting off high-energy jets of particles and light at some poor, innocent passers-by.

But other galaxies are not so well-behaved. 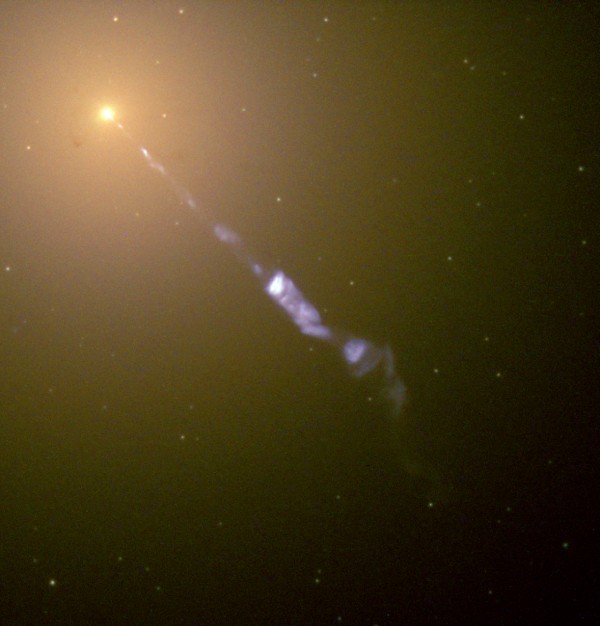 For example, some 53 million light-years away in the Virgo Cluster, the galaxy Messier 87 shoots a jet some 5,000 light-years long out of its central supermassive black hole. This behemoth has the advantage of having a black hole a few billion times as massive as our Sun (rather than a few million), and happens to be in the process of devouring a large amount of matter at the moment. 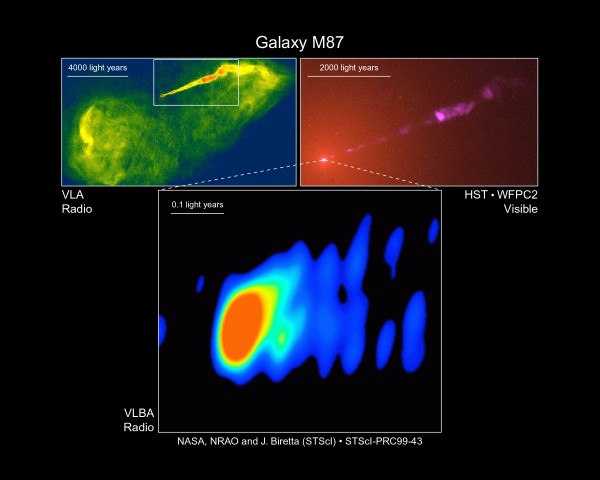 These supermassive black holes possess some of the strongest and largest magnetic fields in the Universe, and as matter falls in -- whether its from stars, planets, asteroids, gas or dust -- it gets broken apart into individual atoms, which become ionized. Like all charged particles, they get accelerated by these magnetic fields, resulting in, among other things, the intense emission of radiation along the magnetic-axis of the black hole! 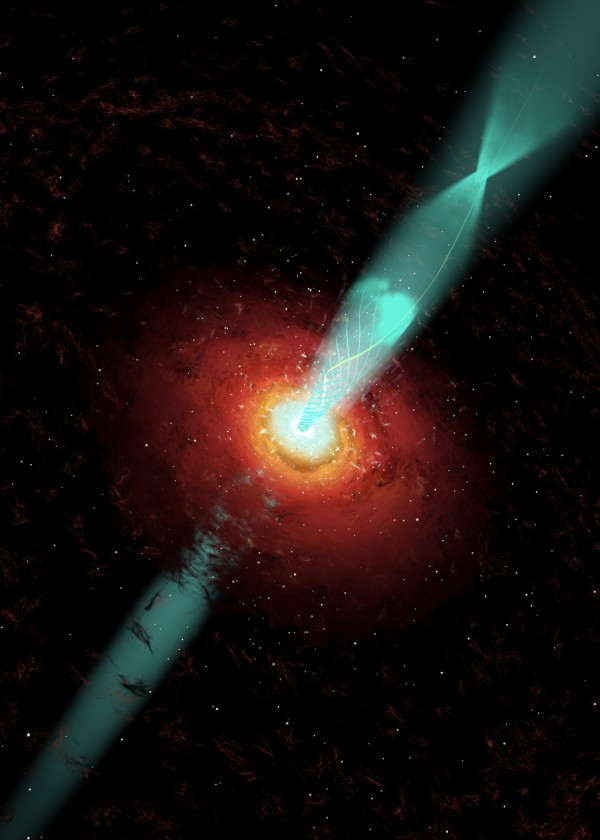 Galaxies with these powerful, collimated jets emitted from their central black holes are known as Active Galaxies, and this radiation covers the entire spectrum, from gamma-rays through visible light all the way down to radio frequencies. Nearly always, this radiation comes off in an extremely narrow beam, so that any one particular Active Galactic Nucleus (AGN) is very unlikely to fry us, here on Earth. 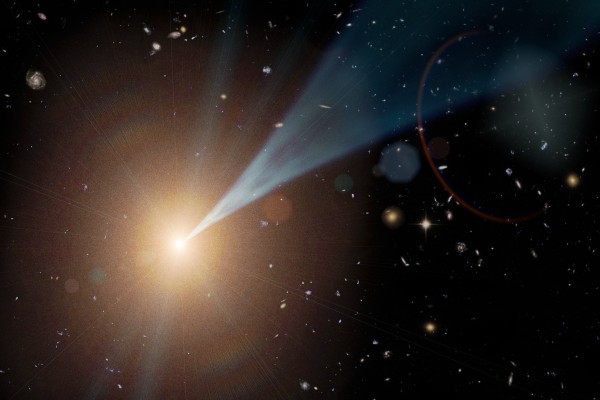 But, keep in mind, there are hundreds of billions of galaxies out there in the Universe, and that even with a tiny percentage of them containing active nuclei and an even tinier percentage pointing right at us, it is a very big Universe. And for those of you who've come by here recently, you'll recall that we've just completed surveying the entire Universe in the infrared, imaging -- literally -- hundreds of millions of these galaxies. 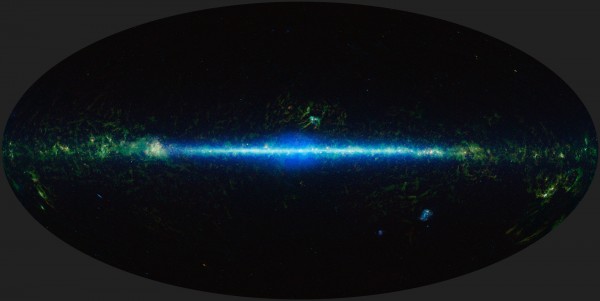 With the entire sky imaged by the infrared WISE satellite in four wavelengths -- higher energies in blue and lower energies progressing through green and into red -- hotter objects like stars and galaxies should pretty much always show up with a blue or greenish-blue color. Very dusty regions will show up as red or green, as that gas is heated up by stars to be much warmer than the interstellar medium, but still far too cold to give off visible light.

But remember, nearly half of the "points of light" imaged by WISE are galaxies, some of which are active. And every once in a very rare while, these active galaxies have a jet pointed right at us. 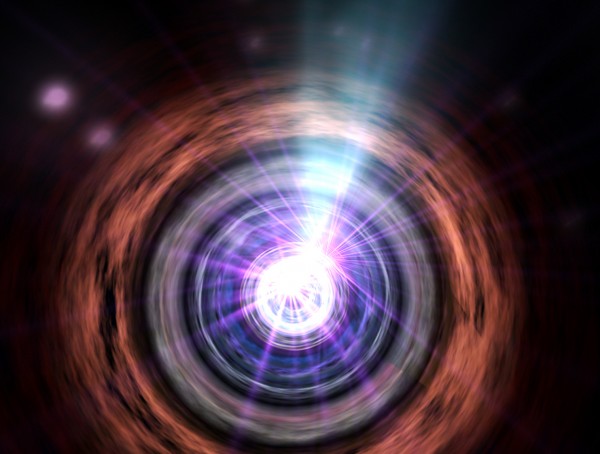 These rare but fascinating objects are known as Blazars, because they're "blazing quasars." Normally found with Gamma-Ray telescopes, you wouldn't necessarily think that an infrared telescope would be a great Blazar-finding tool. But Francesco Massaro and his team have done exactly that, with great success. Here's how: 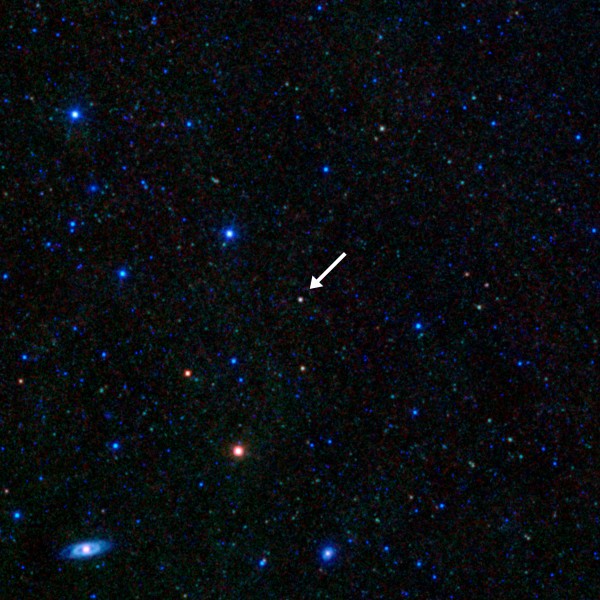 With a uniquely flat spectrum across WISE's four color filters, Blazars appear white compared to everything else. Why white? Unlike practically every other point of light in the image, which shows up colored based on the thermal temperature of the emitting objects (hotter appear blue, cooler appear red), the light from Blazars comes from that characteristic radiation of charged particles being accelerated by their black hole's magnetic field: synchrotron radiation! The synchrotron radiation shows up with a roughly equal brightness in all four of WISE's filters, giving it a whitish appearance compared to all other compact object.

These objects are very rare and normally hard-to-find, but because of their unique and easily identifiable appearance to WISE's eyes, more than 200 new blazars have been seen and thousands of old ones confirmed, with estimates that thousands more are in the all-sky image, just waiting to be discovered. This is particularly remarkable, considering that there only are around three thousand known Blazars in the entire Universe! (3,081 as of October, to be more precise.) 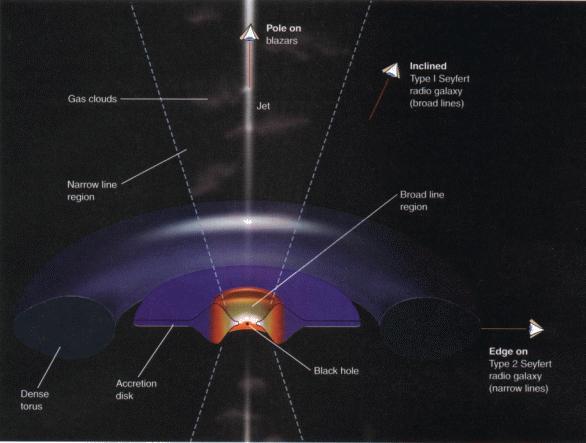 In other words, this infrared satellite could, if we're lucky, wind up doubling the number of known Blazars! As the study's lead author notes:

Blazars are extremely rare because it's not too often that a supermassive black hole's jet happens to point towards Earth. We came up with a crazy idea to use WISE's infrared observations, which are typically associated with lower-energy phenomena, to spot high-energy blazars, and it worked better than we hoped.

What an unexpected, serendipitous use for an infrared satellite: as a gold-mine for Blazars, which just happen to be some of the most interesting objects in the Universe. 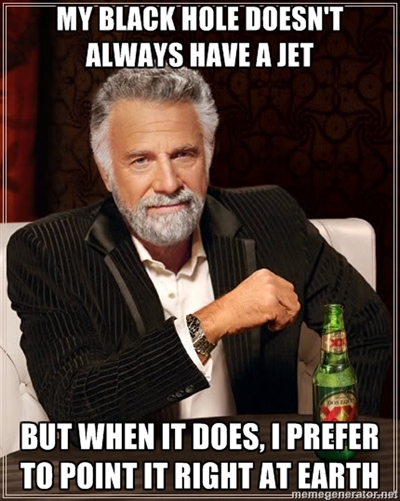 This is part of the beauty of doing an All-Sky Survey; if you can just learn one new technique for finding/identifying one class of object, you're suddenly going to catch every single one in the Universe that your instrument is sensitive to.

And that's how a simple infrared satellite can capture thousands of the most energetic cosmic cannons in the Universe!

Do these satellite images give us a better tool to find correlations between these AGN's and the omg particles we detect here on earth? (That is to say if there is any relation between those two events.)

Black holes are commonly perceived as being giant sinks from which nothing can escape.

These artist's renderings of active black holes seems to disprove that - jets are coming from both sides of the galactic disc. Can anyone here confirm that the pictures are accurate?

If black holes aren't gateways to other regions of any description, then, it seems, they can only be super-dense areas that emit energies under the right circumstances. Also, if black holes were sinks, shouldn't a galaxy's shape show a conical feature where the drawn-in material goes?

> as matter falls in

It's a question of what "in" means.

I would love to know how big or tiny these jets can get. Also, how far would the magnetic field lines extend from some of the most massive blackholes, as say compared to the size of our suns? Great post w/ great illustrations.

Correct. Black holes are not holes. They have mass, volume, and shape. They are called black holes because, in not reflecting any light due to the fact that light cannot escape it's gravity, they appear black and block out the light from stars behind it. It is a failing of semantics that causes this misconception, much like the term "big bang" was not an explosion, but an expansion.

They certainly are not "gateways" to anything. They are in fact super dense bundles of matter, crushed star innards, if you will. They don't emit the charged particles directly, though. Rather, they are accelerated fast and faster as they circle it in a decaying orbit. Much is consumed, but some of those particles are actually ejected before reaching the event horizon, hence gamma ray jets shooting out from the poles.

@J Ascher & Matt
It is my understanding that a black hole has no volume, being a gravitational singularity- a one-dimensional point. However, it's mass determines it's Schwartzchild radius, or the Event Horizon; the point at which matter falling into the "hole" exceeds the speed of light. This is the boundary past which nothing can escape. It is the material that orbits the black hole outside this boundary that we can see, as it is "spaghettified," by intense tidal effects and heated to millions of degrees. As it is compressed into the smaller area around the event horizon, some is ejected and channeled by magnetic fields into these magnificent jets.
Do I have the basics correct Ethan?

The volume of a black hole is its surface area times the length of time the hole exists as opposed to the standard 4/3*pi*r3. It is not a standard concept of volume as we typically experience it, but to say it has no volume is incorrect.

Long ago, in the center of M87, a young man inside a powerful fighting machine shouts: