It's Getting Hot in Here, So Take Off... The Whole Planet?

"Be still when you have nothing to say; when genuine passion moves you, say what you've got to say, and say it hot." -D.H. Lawrence

Here in our Solar System, the planet closest to our Sun is Mercury, speeding around in a complete orbit once every 88 days, with daytime temperatures reaching a sweltering 400° C, or around 800° F. 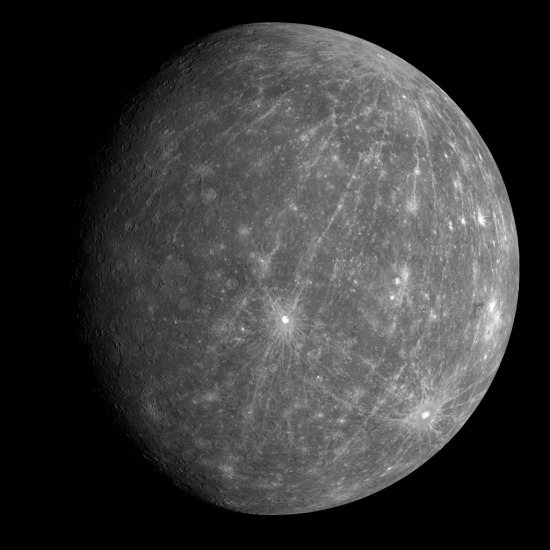 With its size, temperatures, and distance from the Sun, Mercury has had its entire atmosphere stripped away by the Sun. And while these temperatures might seem hot, in comparison with what we experience on Earth, remember that Mercury is still a whopping 46 million kilometers away from the Sun.  And that's at its closest!  Compared to the diameter of the Sun itself, the size of Mercury's orbit is more than thirty times as large. 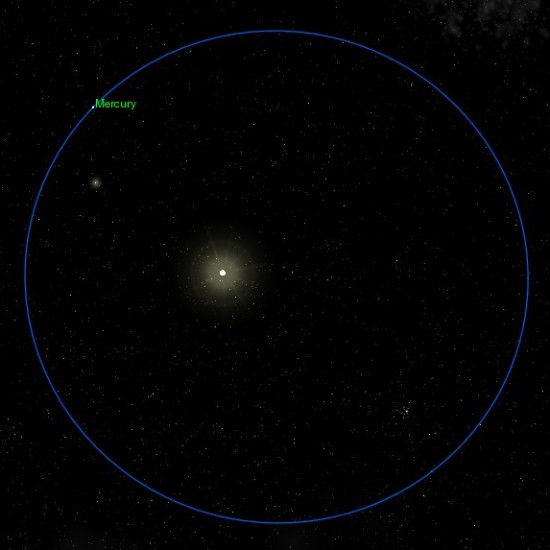 But while Mercury reaches high enough temperatures that its atmosphere acquires so much kinetic energy from the Sun that the individual atoms cannot stay gravitationally bound to the planet, at least the surface of Mercury is safe. 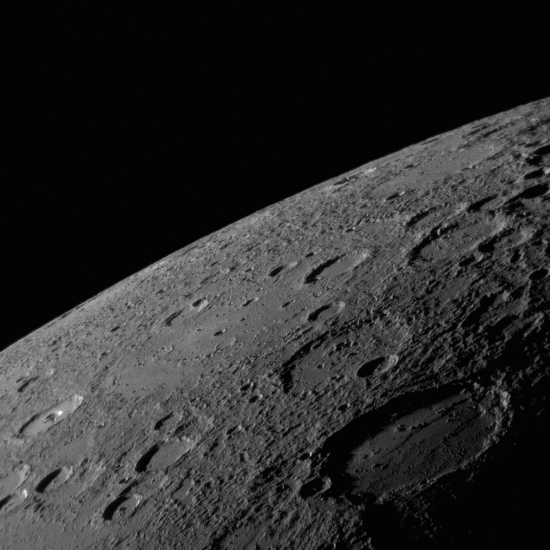 It seems unfathomable that a planet could be so close to its parent star that its very surface would be in jeopardy, but let's remember what we ought to see when a planet transits in front of a star. 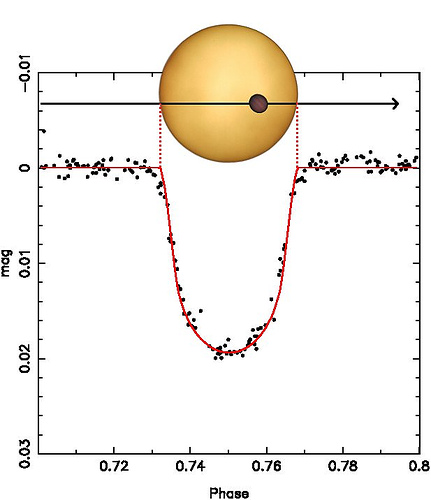 What ought to happen is that a small -- but increasing -- fraction of the star's light should be blocked as the planet moves across its parent star, hitting a maximum when the planet crosses the Sun's center, and then decreasing in a symmetric fashion as the planet moves off of the Sun once again.  And this pattern should repeat, over and over again, as the planet continues to orbit its star.

But this isn't what they found, not for the star KIC 12557548, not according to Kepler mission scientist S. Rappaport and his team.  In fact, from the team's paper, their transit curve looks like this: 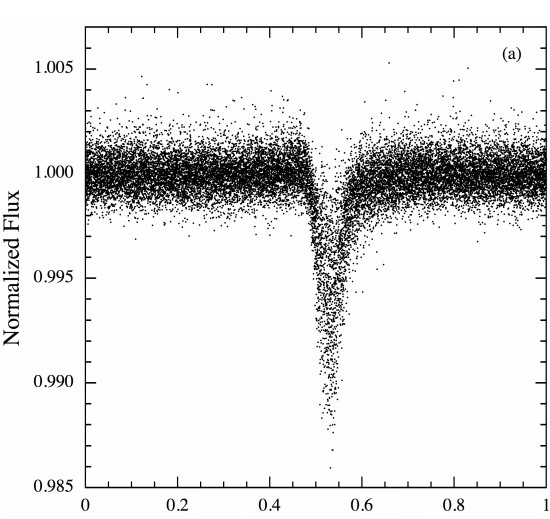 You'll notice that this curve is not symmetric.  It rises, as expected, but it tails off much more slowly and gradually both than you'd expect and than it rose by. This can, as far as we understand it, only mean one thing: this planet has a tail!

"Tails are for comets, not planets," you're probably thinking.  How could a planet -- a planet that probably lacks an atmosphere, no less -- possibly have a tail? 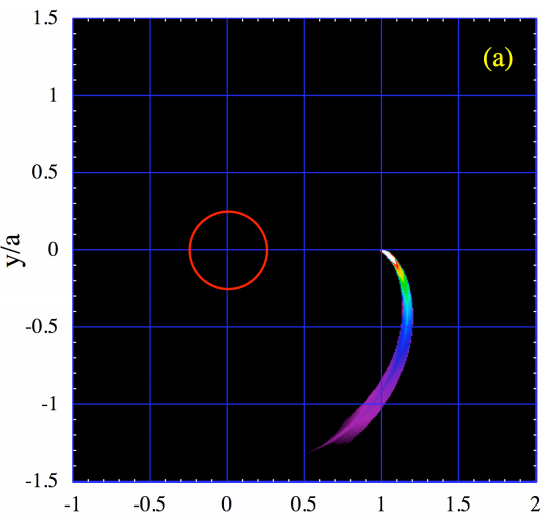 With an orbital period of just fifteen hours, temperatures on the surface of this world easily approach 2,000° C (3,600° F), temperatures high enough, in the vacuum of space, to literally boil a planet!  In other words, this planet gets so hot that its surface is literally evaporating! 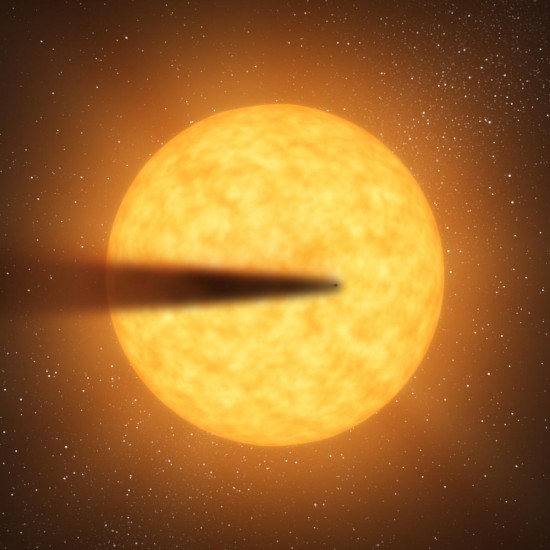 And based on the rate of evaporation, the entire planet will likely be gone in about 100 million years.  That may seem like a long time, but it's only about 2% as long as our Solar System's been around!  According to Kepler scientist Dan Fabrycky,

A lot of research has come to the conclusion that planets are not eternal objects, they can die extraordinary deaths, and this might be a case where the planet might evaporate entirely in the future.

Welcome to the first star -- KIC 12557548 -- with a planet so close that it's going to die slowly and painfully, literally boiled away atom-by-atom.  And from over a thousand light-years away, here on Earth, we're watching it happen.

Please pardon the dust while I figure out all the nuances of this new blogging platform and setup.

Thanks for bearing with me, everyone, and I'm so happy you're all sticking around for the fantastic content!

Great article, but It looks like it's being sandblasted, or sunblasted, instead of boiling and evaporation. It might be still cold under the sputtered surface just like the moon is freezing under its warm surface. It made me check a few facts and it turns out that there is an interesting paper about this:

"Craters very near the poles of Mercury, such as craters C and D, contain large regions in which surface tempera- tures never exceed 110 K (-163.15°C). The regions where the model predicts stable surface or subsurface ice deposits are consistent with the sizes of the radar features at those locations."

Anyway Mercury is a place hot enough to light a candle with some sunlight even if Sol is 46 million kilometers ; )

It's the same physics that produces comet tails. With comets, the icy surface boils/sublimates off, exposing the ice below (which won't be that cold because the heat conductivity, while low, is definitely not zero). Very few substances (not even most kinds of rock) are solid at 2000K and pressures less than 1 atmosphere. The biggest difference is the noticeable aberration of the stellar wind due to the orbital motion of the planet, so that the effective stellar wind direction is well off of radial. That's why the tail points behind the planet as well as outward.

I will point out that we don't normally think of "silicon dioxide ice" when we talk about rocks here on Earth, but as lava (maybe 1200 K) will attest, you don't even remain in the solid phase when you have an atmosphere of pressure on top of you.

Still, we've never seen a planetary tail before, and that's the most exciting part, at least for me!

Finally the link worked for Starts with a Bang!. Love this site so I hope all of ScienceBlogs gets back to normal soon.

Is this a relatively young star / solar system? If not, how could this planet still be around? Could there have been doomed planets orbiting close to our sun billions of years ago?

It's fascinating to me how an object(planet) can be in such a close orbit around a star. Just several diameters away, and yet a stable orbit. The heat and energy output must be huge. But always thought that a planet like that would get pulled to the sun. Is it still an unknown how planets could form so close to the star?

This phenomenon made me think if the object could be an acquired satellite? For what we know, gravitational effects between stars or between planets can eject larger bodies, like planets from one solar system to an other. That could explain the high velocity which is needed to keep the object on orbit around the star. So perhaps even relatively older stars could receive new planets on their course.

So long as you keep posting, I'll keep visiting. It's amazing that an entire planet will simply evaporate away like an ephemeral puddle of mass.

As the surface boils off, its mass will decrease, which should allow it to develop a wider orbit? Unless there's some kind of friction slowing it down faster than it can shed mass I suppose?

Any way it could form a ring, get pushed out (solar wind), cool and reform another planet?