I Know What You Did Last Winter

"You better lose yourself in the music, the moment
You own it, you better never let it go
You only get one shot, do not miss your chance to blow
This opportunity comes once in a lifetime yo" -Eminem

Here on Earth, a cold, frozen winter lasts three months, with the Sun's rays pointed a maximum of 23.5 extra degrees away from your part of the Earth from normal.

On Mars, however, winters are even more severe. 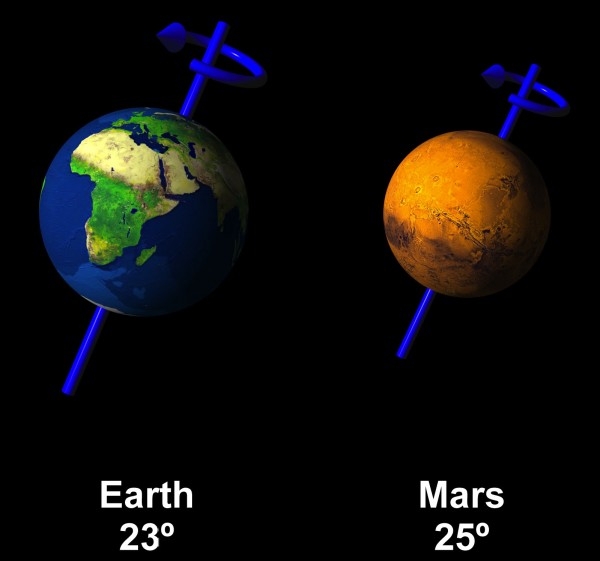 With a slightly more severe axial tilt than Earth, an extra 78 million kilometers separating it from the Sun than our planet, and the coldest season of the year lasting more than 150 days, winters on Mars are a cold, lonely and yet very unique experience.

With its thin, rarefied atmosphere, the red planet gives us a bluish view of the Sun close to the horizon, a striking demonstration of how alien a world Mars truly is to us. But exploring, even for a robot, is impossible during winter. Even our best-engineered rovers cannot gather enough sunlight to power themselves during the winter, and need to hibernate. 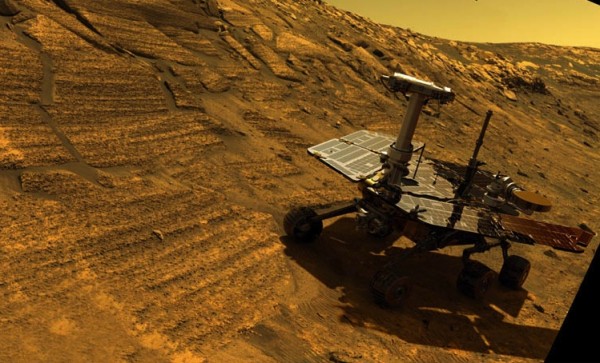 Image credit: NASA / JPL-Caltech / Cornell, and yes, this is a synthetic image.

Even the Opportunity rover, my favorite mission to the red planet, needs to go into hibernation every martian winter. Now in its unprecedented 9th year of operation on Mars, Opportunity has come farther than any human spacecraft ever has on the surface of another planet. Since January 25, 2004, Opportunity has traveled more than 34 kilometers in distance, powered only by the distant Sun. 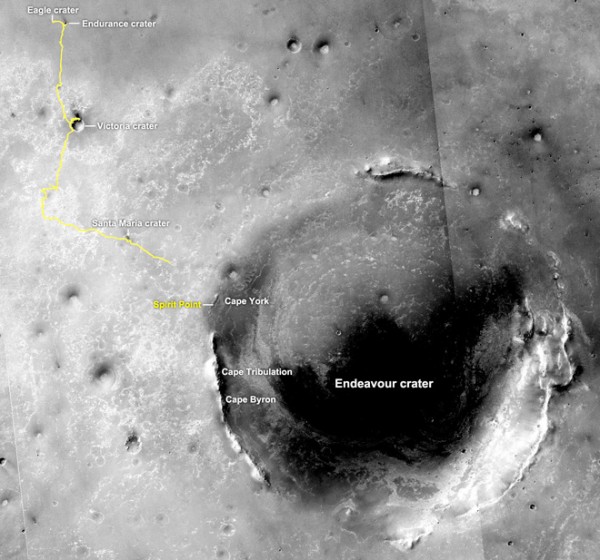 And while we're currently less than a month away from Curiosity -- the next-generation in Mars roving -- touching down on our desert-like neighbor, Opportunity has just awakened from its fifth Martian winter, at the rim of the largest crater ever visited by a rover on any world. 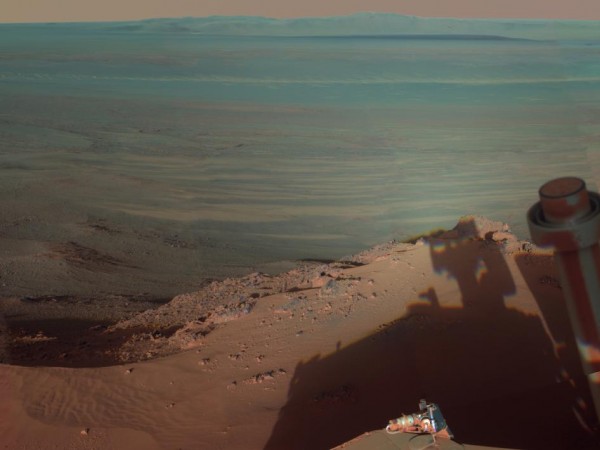 While I'm in "sleep mode," I'm completely useless. But for this incredible workhorse of a rover, it used this time to snap an 817-snapshot panorama, which has been stitched together into the largest, most impressive landscape of Mars I've ever seen.

For the full, uncut, 124+ MB file, go here, but I'd like to take Opportunity's masterpiece and showcase just a few of the amazing and impressive sights it offers us. This mosaic of 817 photos was taken from Greeley Haven, an uneven outcrop chosen as Opportunity's hibernation location so that its solar panels could get the maximum amount of sunlight during this time.

Miles off in the horizon, you can see the sand dunes that define Mars' landscape. (I highly recommend clicking on all of the images below individually, as they were sampled by me at full resolution from the original and are most impressive.)

The rarefied atmosphere ensures that the shapes and patterns in the dunes last much longer than they do here on Earth; these were virtually unchanged during Opportunity's five stationary months at Greeley Haven.

The rocky, sandy hills in the distance cannot help themselves, but they remind me so much of the Arizona desert here on Earth that I had to showcase just one small, distant hill to show you the impressive resolution of Opportunity's camera. 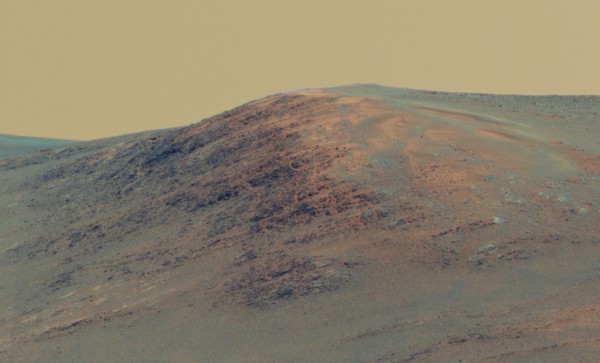 Opportunity also, in its panorama views, takes pictures of itself and its various components. After nine years on Mars, you very likely would not look this good, and perhaps Opportunity would have, either, if it didn't get the most favorable gust of wind to ever occur on Mars (for humans), blowing a huge fraction of Martian dust off of the rover and boosting the amount of Sun its solar panels could absorb! 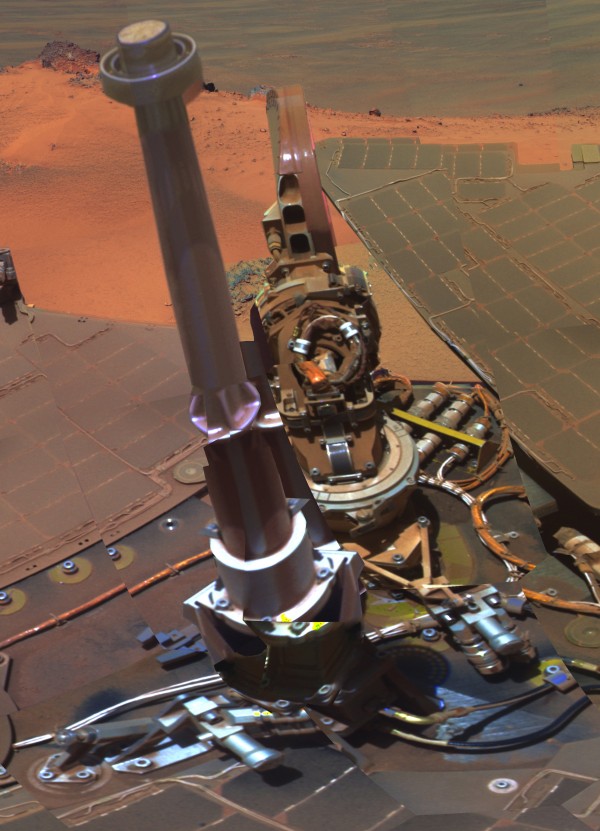 For me, personally, one of the most spectacular sights any robot can take is a shot of its own footprints. (Or, in this case, tire tracks/treadmarks.) Opportunity's path to its outcrop tells a remarkable story of a robot fighting its way through tough terrain to its eventual goal. 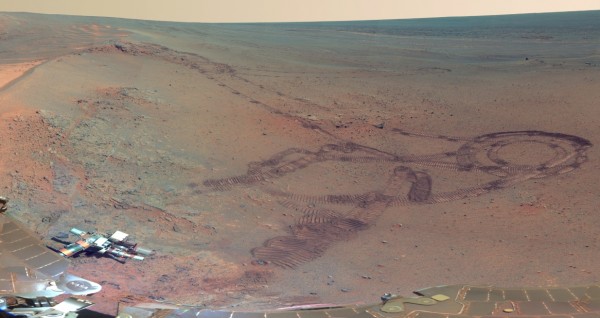 As you can tell, to the right of the image above, Opportunity is even capable of doing donuts if it needs to, to orient itself in order to get where it wants to go. That's a better turning radius than my car!

And finally, I wanted to give you an impression of just how impressive this panorama actually is, so I took just a small, thin slice -- grabbing less than 3% of the total image -- and I present it to you here, below.

So don't brag to me about what you did last winter; I know a robot on Mars that has you beat! And hopefully, in the very near future, its next-generation successor will outclass even this remarkable workhorse.

Cheers to Opportunity and the entire team for nine years of amazing science; I can't wait to see what Opportunity finds next!

Shall I mention Lunakhod 2's 37km, or would I be crushed mercilessly on the grounds that the Moon is not "another planet"?

Certainly I'll be celebrating if and when Opportunity beats that record!

I don't want to come across as an ass, but there is just nothing to see on Mars except for a lot of red and blueish sand, the view looks like one of those vacation hotels with view on the beach while the ocean is about a mile away. I think that most of us who stayed on planet Earth the past winter had a much better time, sorry : \

You people are kidding me, right? This is Mars. I can see surface features of the Moon with my naked eye, can you say the same for Mars? Did you go anywhere this past winter on Earth that no man has been? Have you ever even read an article about some explorer venturing somewhere new and untouched that wasn't 80yrs old? This is Mars. World of Wonders. Damn........

Impressive pictures for sure. But I still find it bizarre that no-one thought to include a brush in amongst the scientific tools so that Opportunity could dust off the solar panels. I guess it wasn't deemed worthwhile for a 90 day mission. Might have come in handy by now though.

Well Jon, I'm more in-line with a quote in a previous post of Ethan; "“We came all this way to explore the Moon, and the most important thing is that we discovered the Earth.” (Discovering the Earth from Space)

I find the technical aspect of this Mars-picture amazing, and support it to the fullest, but visually in comparison to Earth it is nothing special, no water, no clouds, no life ... I might be too much of a chauvinist. :mrgreen:

I'd say we build on Mars a landing strip with a gas station and a motel, as a halfway basis, and move on up to check out Jupiter and its Galilean moons, those place look like much more fun.

You have cause and effect backwards. They considered having a panel-cleaning mechanism, but rejected it for reasons (it's more complicated than you'd think). This is what resulted in them deciding on a 90 day mission -- because that was how long they were reasonably sure the rover could operate before the panels became too dust covered. Then, lucky us, it turned out the Martian wind was more substantial than believed.

In hindsight, the dust cleaning mechanism was just unneeded extra weight and complexity. They made the right call.

Hey, earth is certainly beautiful. Most beautiful spot in the solar system I say with unabashed bias.

But if the only thing that comes to mind when considering the rovers on Mars is how scenic the vistas are and how nice the vacation photos would look framed on your wall, then that just seems terribly sad to me. Sometimes beauty isn't just shape and color, but also meaning.

I love the eeriness of these photos. Opportunity is out there on a planet by itself, completely isolated. I can only imagine what it must be like.

Both rovers are truely amazing machines!
I´ve a model of them looking at a little Mars Meteorite (for enjanched effect) and every time I look at it it makes me smile.
Loveable little machines they are.
http://imgs.xkcd.com/comics/spirit.png

It's surprising, and rather dismaying how little publicity and attention these expeditions receive. We've put several substantial, mobile, communicating machines on another planet.

This is like sailing across the ocean compared to a weekend drive ... eh, even the analogies are far too small. Look up in the sky to Mars, then imagine going there. We did it, using a machine as a proxy for a human. We have essentially visited another planet, something which was beyond the world's dreams for 99.9% of human history, and pure fantasy until the last few decades.