"Why I came here, I know not; where I shall go it is useless to inquire - in the midst of myriads of the living and the dead worlds, stars, systems, infinity, why should I be anxious about an atom?" -Lord Byron

Welcome back to another Messier Monday here on Starts With a Bang! Messier's 18th-Century catalogue of 110 deep-sky objects that could potentially be confused with comets by skywatchers has endured as one of the greatest collections of deep-sky objects clearly visible to amateur and professional astronomers worldwide! 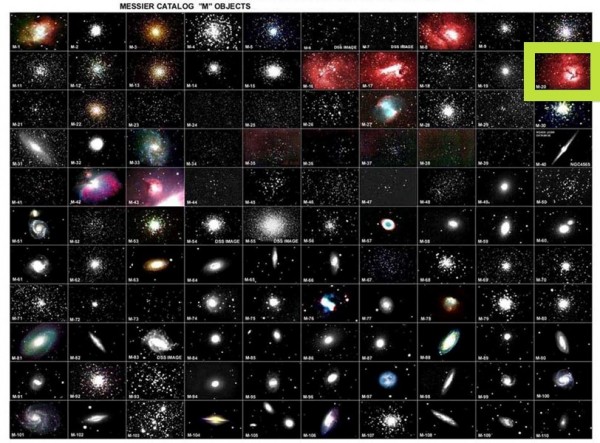 Today, we're taking a look at one of the most unique objects in the entire Messier Catalogue: the Trifid Nebula, Messier 20. From very high northern latitudes -- such as where I live -- it's difficult to see, so your best bet is to wait until it's near its high point above the horizon, which these days occurs close to 4:00AM. If you decide to go for it, here's how to find it. 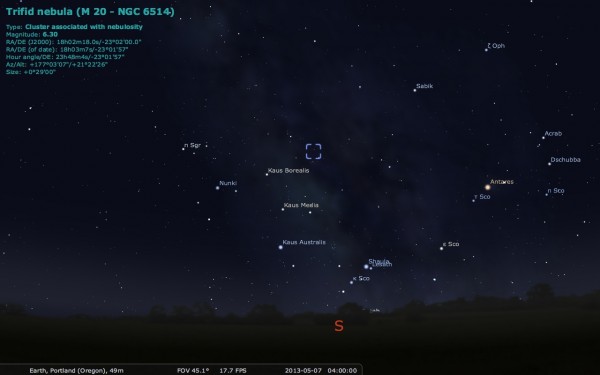 The constellation of Sagittarius contains a well-known asterism -- a collection of bright stars -- that strongly resembles a teapot. It will rise in the southeast at around 1:00 AM (earlier the farther south you live) at this time of year, although that will happen earlier and earlier as summer comes. Kaus Borealis, the star at the "top" of the teapot, is your guide towards the Trifid Nebula, in the same fashion that it guides us towards the nearby Lagoon Nebula, M8. (It's the larger nebula, visible just below.) 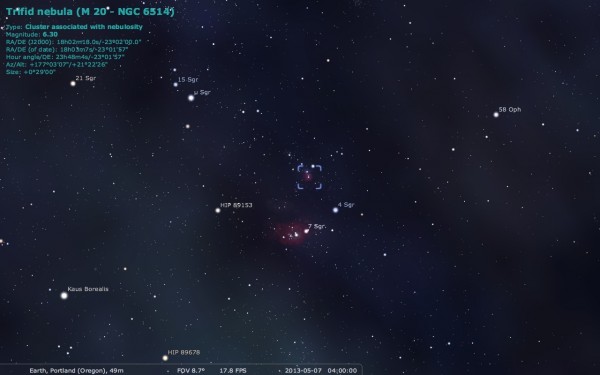 Follow along the left-edge of the teapot's top about another four degrees to the bright orange giant HIP 89153, a star faintly visible to the naked eye, and head just another two degrees farther towards a faint, small nebula with a few dimmer stars in it. Congratulations; as promised last week, you'll arrive at one of the most remarkable molecular cloud complexes in the entire galaxy: the Trifid Nebula! 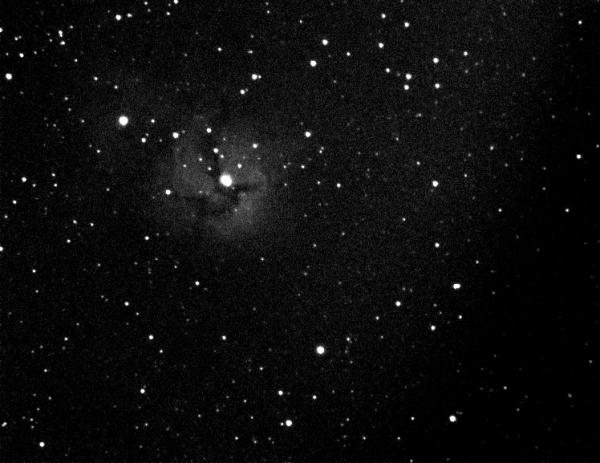 Visually, this is one of the most unspectacular Messier objects out there, faint, fuzzy and with virtually no interesting features to the naked eye through all but the absolute largest telescopes. Directed towards our galaxy's center, it went undiscovered until 1764, when Charles Messier himself first laid eyes on it. His description was unremarkable:

In the same night I have determined the position of two clusters of stars which are close to each other, a bit above the Ecliptic, between the bow of Sagittarius and the right foot of Ophiuchus: the known star closest to these two clusters is the 11th of the constellation Sagittarius, of seventh magnitude, after the catalog of Flamsteed: the stars of these clusters are, from the eighth to the ninth magnitude, environed with nebulosities.

But set yourself up to observe some different colors with multiple images in different wavelengths (with different filters) -- and to see some contrast -- and you won't believe what you're about to lay your eyes on. 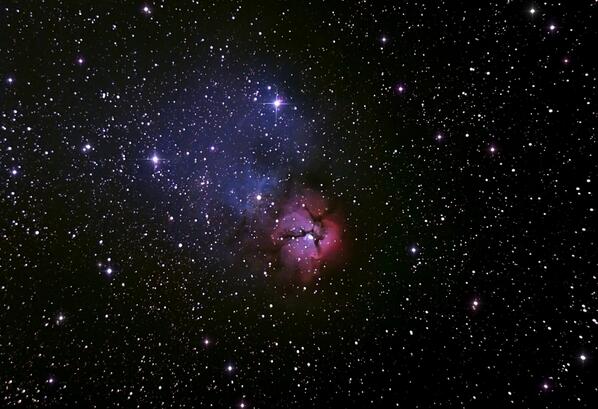 When a molecular cloud -- that is, a cloud of neutral, hydrogen-rich gas -- collapses far enough, it ignites the birth of new stars, ionizing the gas around it and producing a bright, reddish glow. Here, the Trifid Nebula is so young, still in the process of forming stars (some of which are estimated to be just a few hundred thousand years old), that there's still a bunch of neutral gas here: hence the big, dark swaths of neutral "darkness" running across it! There's also some strong evidence that recent supernovae -- a by-product of having ultra-young, supermassive stars -- may be responsible for these dust lanes. 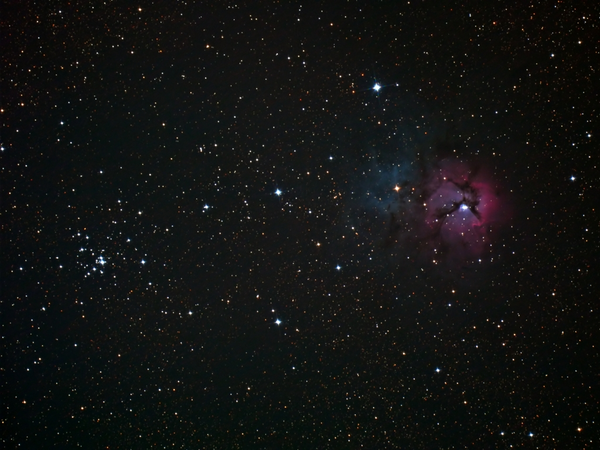 You can also see, lying outside of the pink region, a vast blue-colored region. The pink region is an ionized emission nebula, where the ultraviolet light from the hot stars inside has knocked the electrons off the atoms inside. When they recombine with nuclei, they emit a characteristic red glow, at 656.3 nanometers! Meanwhile, the blue glow is a telltale sign of a neutral reflection nebula, which is neutral, unionized gas that simply reflects the light from the hottest, youngest and bluest stars that are the hallmarks of brand-new clusters! 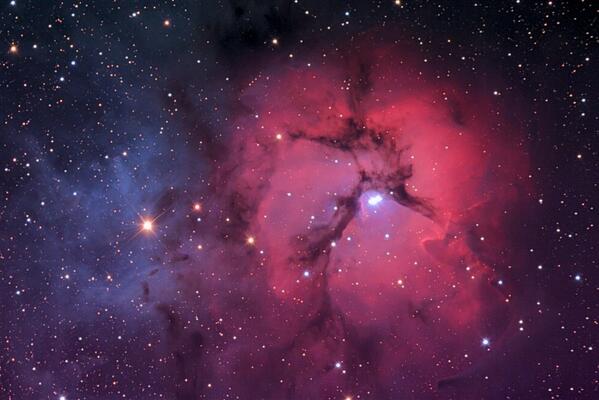 The Trifid Nebula may well be the youngest star cluster in our galaxy. It was hotly debated what its distance was for many years; this was a consequence of the neutral dust obscuring our view of the stars that we'd normally use to tell us the distance! 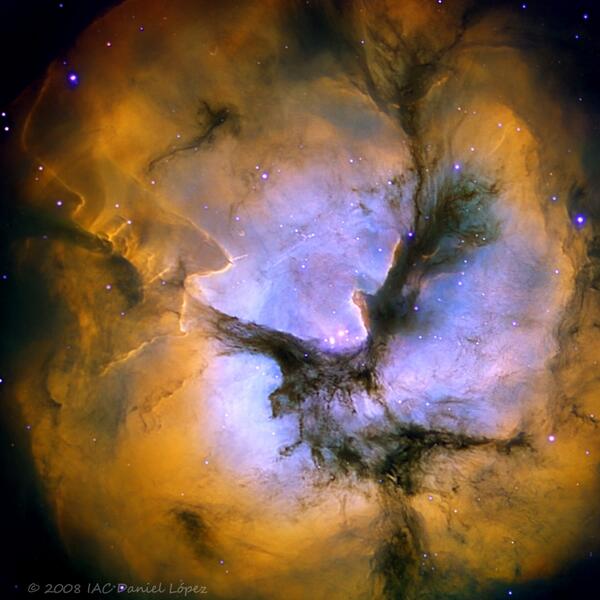 Estimates ranged, on the low end, from around 2,200 light years all the way up to greater than 9,000 light years on the high-end. Finally, infrared observations from the Spitzer Space Telescope came in, and that helped clear things up, at least a little bit. 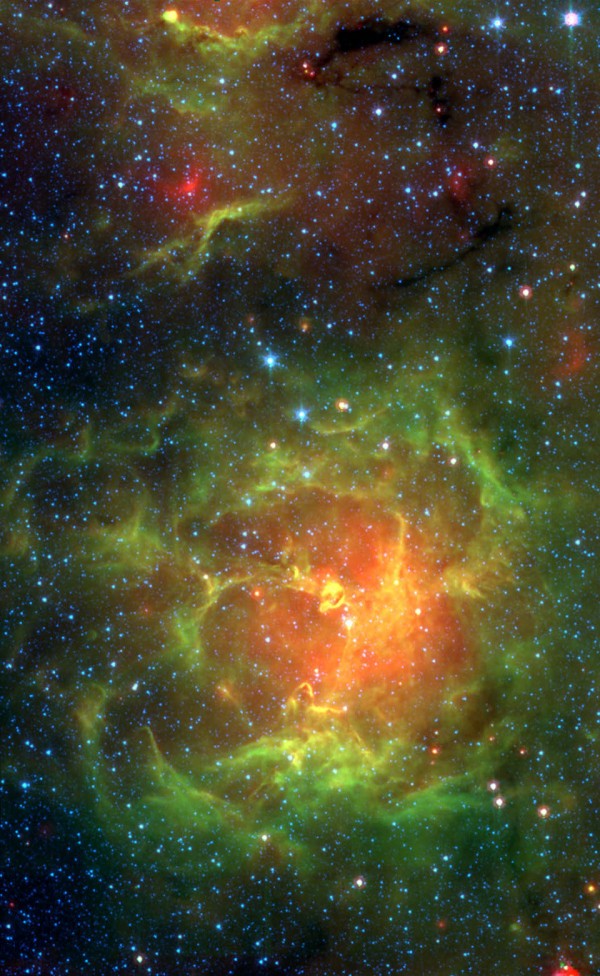 By measuring stars in the infrared, which is transparent to this neutral dust, Spitzer was able to find 30 embryonic stars still in the process of forming, 120 fully-formed stars that had never before been seen by visible images, and was able to determine the distance to the Trifid Nebula as being 5,200 light-years, although there's still some substantial uncertainty there. 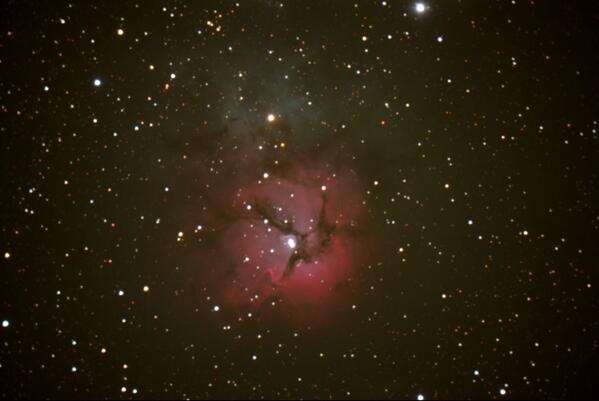 This is one of the great treats of spring, summer and early fall for astrophotographers, as the detail that can be brought out -- between the stars, the neutral/reflecting gas, the ionized gas and the dusty neutral/absorption lanes -- is unparalleled by any other region in our galaxy. And yet, all of these features are exactly what we expect in an ultra-young, dusty star-forming nebula; we just happen to be in the right place at the right time to see it all coming together in our friend, Messier 20! 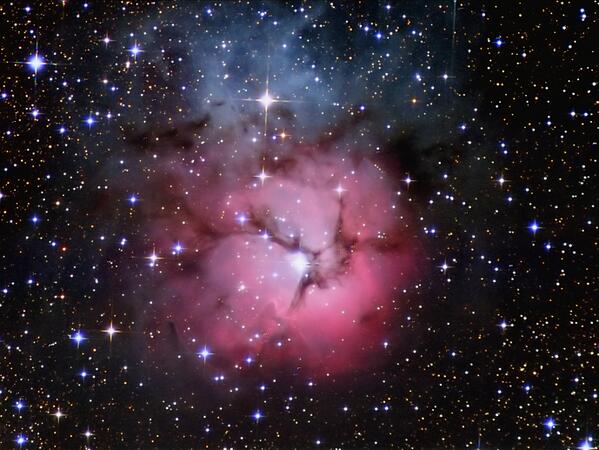 If I were a betting man, and I had to guess where our galaxy's next supernova would come from, I'd pick the one location we know of with the youngest, hottest, newest and bluest stars. With very little doubt, that's got to be the Trifid Nebula! 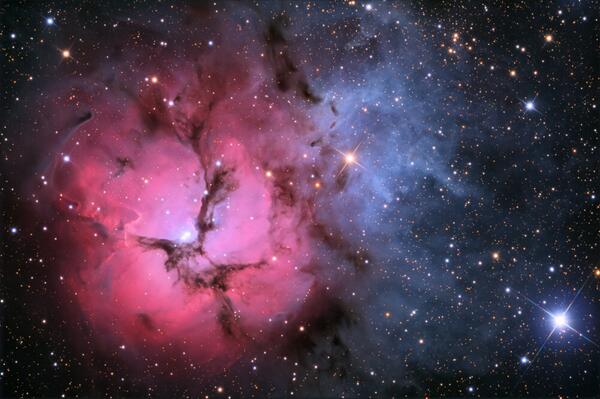 As always, our greatest, visually stunning image of this night sky delight comes from the Hubble Space Telescope, which zoomed in on one tiny region of the Trifid Nebula with the camera that changed the Universe, WFPC2! Here's where it looked (in relation to a ground-based image), followed by the full-size image it saw. 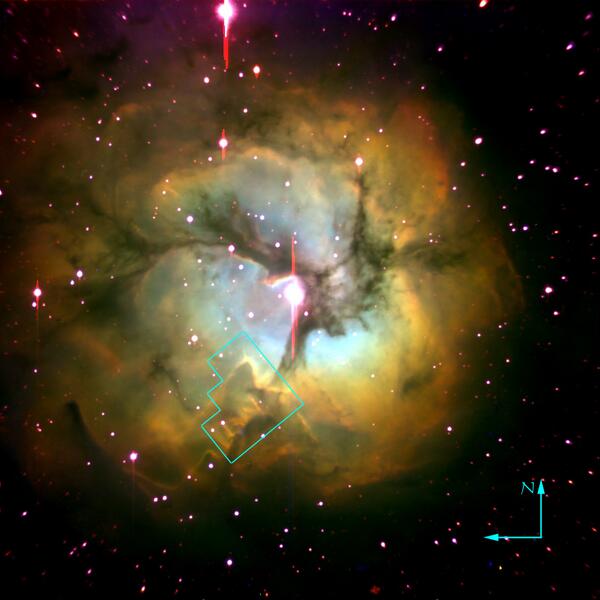 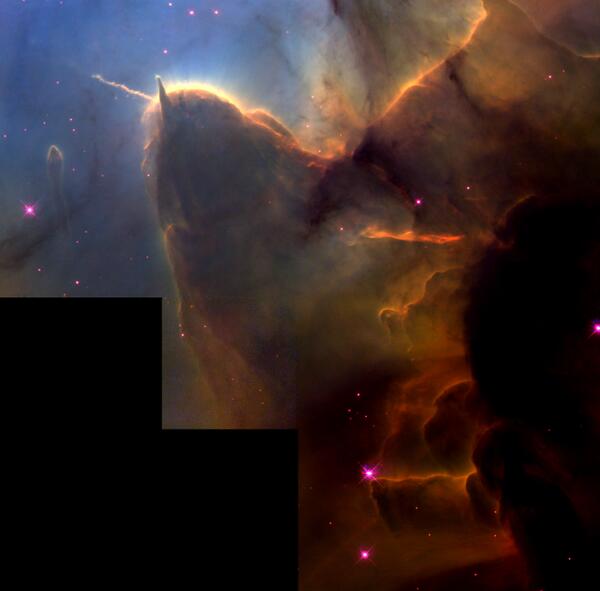 And with that, we close out another Messier Monday! Including today's entry, we've covered the following Messier Objects:

Come back next week, where we'll take a look at a unique galaxy that's a part of Messier's spectacular catalogue, only here, on another Messier Monday!

5200 light years away is a good distance for triffids, as far as I'm concerned. They look pretty through a telescope, but I wouldn't want any in my garden beds!
What's the scale on that last pic? It looks like a giant space-slug, with eyestalks extended. How long are those eyestalks? Why does one look like a rocket contrail?

Next time I'm eating at a restaurant and the waitress walks by and ask how's my food I'm going to reply, "Environed with nebulosities."

I defy any of you to use that in a sentence at some point today.

can u sen mor this beautifull pic