"In the depth of winter I finally learned that there was in me an invincible summer." -Albert Camus

Welcome back to another Messier Monday, only here on Starts With A Bang! The first accurate, large catalogue of fixed, deep-sky objects, Messier's 110-object-strong catalogue features galaxies, clusters, nebulae and more, all visible with even primitive astronomical equipment to skywatchers who know where to look. Each Monday, we highlight a different one of these for your enjoyment. 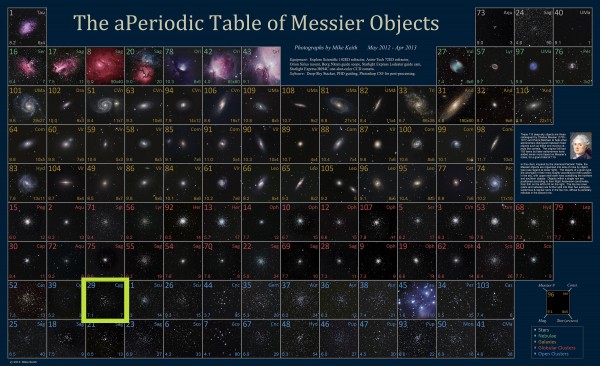 Today, for the first time since we've started the series, I'd like to point you towards the great summer asterism, the Summer Triangle. Loaded with a number of deep-sky curiosities, these three bright stars outshine everything else in their vicinity by a magnitude or more, and along with the Big Dipper (year-round towards the north) and Orion (in the winter), this is one of the three great star-patterns that even the most casual of Northern-hemisphere skywatchers can spot. To start, look towards the east once the sky darkens after sunset. 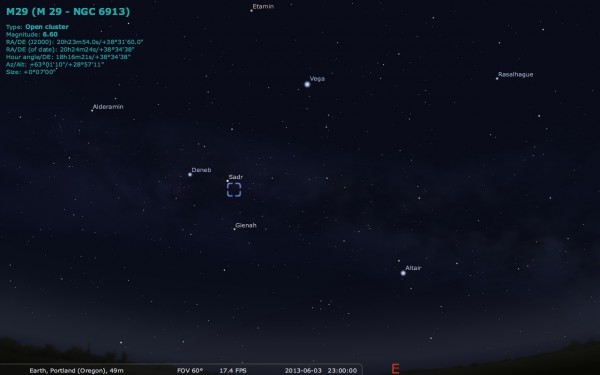 Image credit: Me, using the free software Stellarium, at http://stellarium.org/.

Made up of three bright stars, Deneb, Vega and Altair, the Summer Triangle contains the 19th, 5th, and 12th brightest stars in the entire sky! Just inside the triangle from the least bright of the three (Deneb), you'll find the easily identifiable star Sadr, a yellow-white supergiant, and your guide to today's Messier object: a fantastic open star cluster, Messier 29! 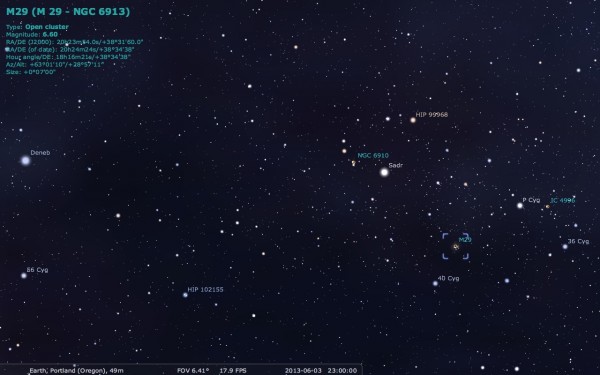 Image credit: Me, using the free software Stellarium, at http://stellarium.org/.

Just two degrees away from Sadr, moving perpendicularly away from the imaginary line connecting Deneb and Vega, you can't miss this dusty, open cluster through a low-power telescope or binoculars. Just make sure that Sadr isn't in your field-of-view, because its brightness can wash out Messier 29 if you're not careful! 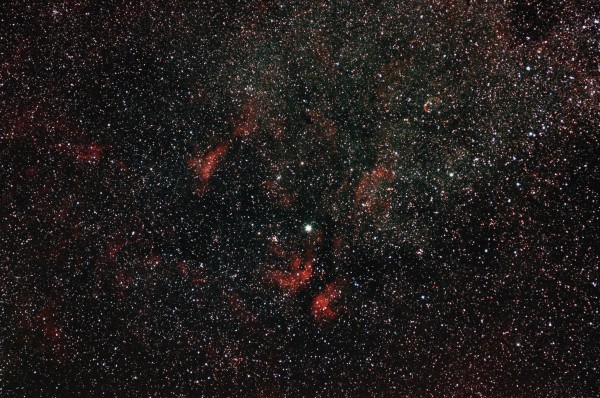 But if you can get M29 on its own, you get to see one of the most spectacular sights you can get with an open cluster: seeing baby stars in their dusty nursery! 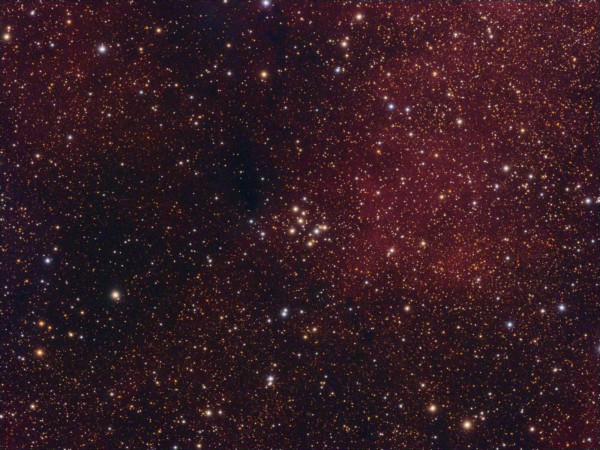 Open clusters tend to stick around for a few hundred-million years before they are torn apart by gravitational interactions, with a few rarities lasting for a billion years or more. But in the early stages, the hot, bright young stars haven't yet burned off all of the nebulous dust that's around when these stars were first forming, and in the case of Messier 29, a lot of its light is blocked by this intervening material!

The visible red hues will show up only if a clever astrophotographer brings them out, otherwise all you'll see is the reduced brightness of the stars in the cluster. 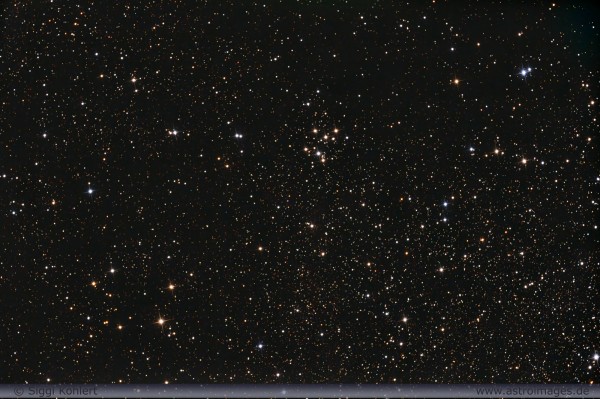 The region of the sky it's located in is very rich in stars, and so there are many faint background-and-foreground stars in the view of Messier 29. Because of the presence of dust, and yet also the unknown amount/density of dust, it's very difficult to gauge the distance to this young star cluster: anywhere from 4,000 to 7,200 light-years away!

But there are some remarkable things about this cluster that are known with great accuracy. 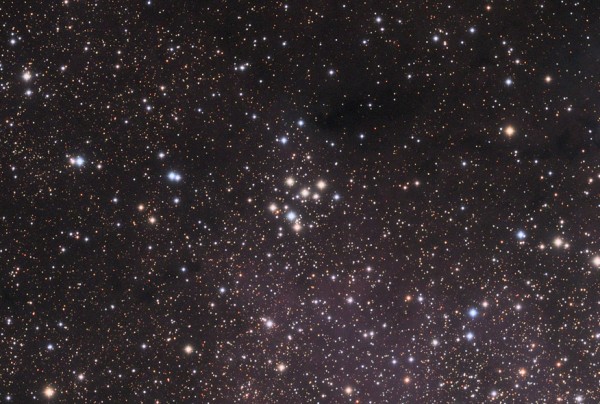 For one, it's very young; just about 10 million years in age, as determined from the spectral classes of the bright, blue stars as well as the evolved giants still found in the cluster. (The brightest B-stars, of spectral class B0, are found here, although there are no O-stars left.) For another, it's moving towards us at 28 km/sec, something measured very clearly from the broadening of the spectral lines from the individual stars. And finally, it's narrow, at just 7 arc-minutes (or 0.12°) across! 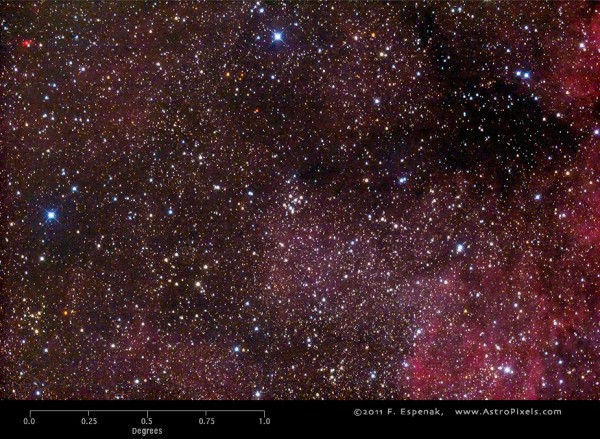 The ionized hydrogen gas surrounding the environs of this cluster are what give it its reddish hue if you look through the hydrogen-alpha (656.3 nm) filter, which accompanies nearly all star-forming nebulae in the cosmos!

And perhaps most spectacularly, if you can get the magnification, are a grouping of eight very (intrinsically) bright stars at the core of this star cluster. 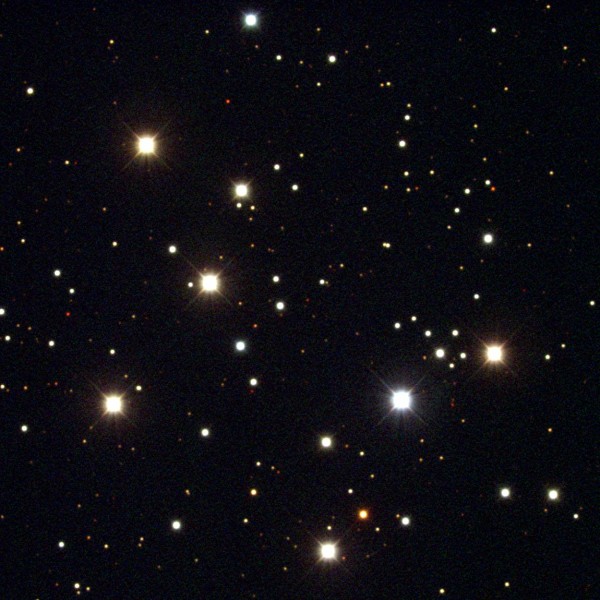 Neither Messier nor others could fully distinguish these eight stars until William Herschel's great 40-foot-telescope came along, but the original catalogue description from 1764 shows that Messier was really on the right track:

A cluster of 7 or 8 very small stars, which are below Gamma Cygni, which one sees with an ordinary telescope of 3.5-foot in the form of a nebula.

Of course, you can really see what's going on if you bother to look in infrared wavelengths, which the 2-Micron-All-Sky-Survey did in remarkable detail! 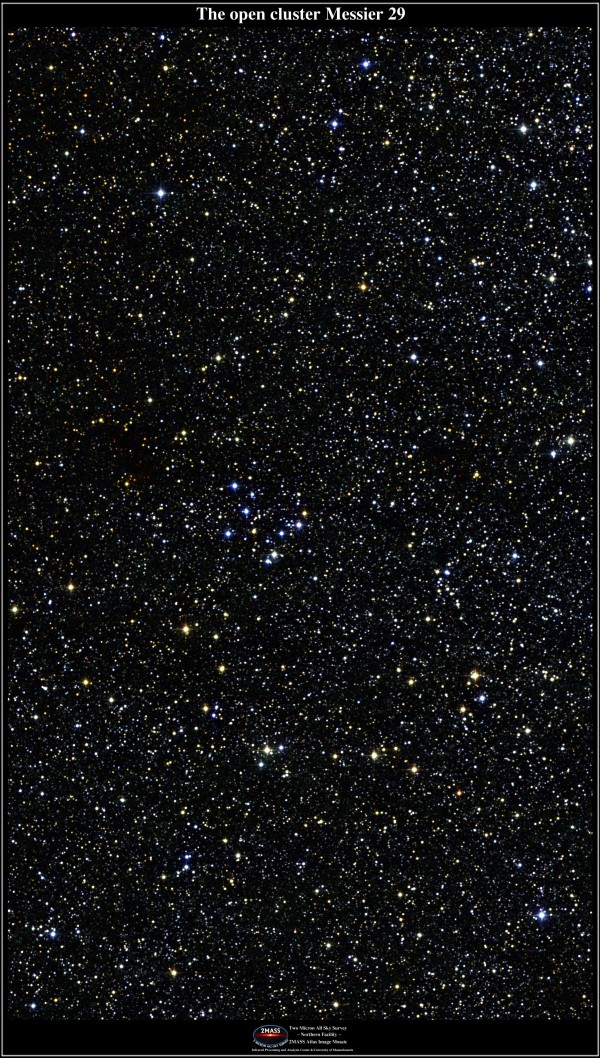 Remember that even though there may be only around 1,000 stars in this cluster, the overall luminosity -- or intrinsic brightness -- is somewhere around 160,000 Suns, since the youngest stars found there are many hundreds (or even a few thousand) times as bright as our home star is!

As far as I know, the 2MASS astrophoto is the best "professional" image out there of this cluster; who knows, perhaps an interested and dedicated amateur will be the one who finds an object-of-interest in here? With so many bright stars only 10 million years of age, novae, planetary nebulae and perhaps even a supernova may not be too far off, although that could happen tomorrow or not for more than 100,000 years! 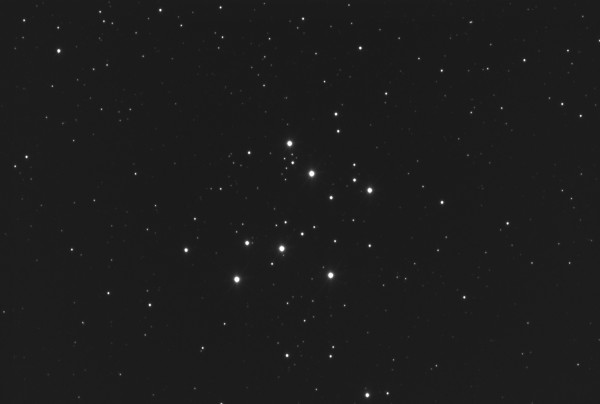 That's all for another Messier Monday, and feel free to have a look back through all our previous Messier Mondays! Including today’s entry, we’ve taken a look at the following Messier objects:

Come back next week, where we’ll take a look at another one of the deep-sky wonders of Messier’s catalogue, only here, only on Messier Monday!