“God put me on this earth to accomplish a certain number of things. Right now I am so far behind that I will never die.” -Bill Watterson

Welcome back to another Messier Monday, only here on Starts With A Bang! With each new Monday, we take an in-depth look at a prominently visible random object from Messier's catalogue of 110 deep-sky curiosities, objects that range from stellar corpses to star-forming regions, to open clusters, globular clusters, distant galaxies, and even a few anomalies! 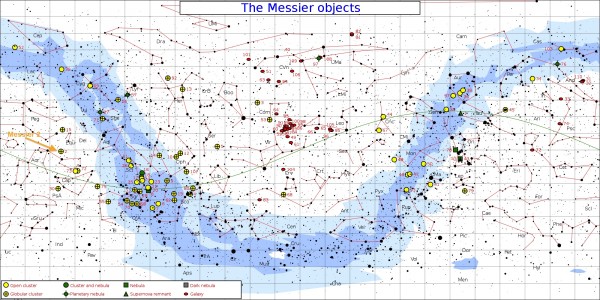 The objects in Messier's catalogue are relatively fixed, at least on the timescale of a human lifetime, with star clusters and star-forming regions found mostly in the plane of our galaxy, galaxies found clumped together in groups and clusters, and globular clusters -- collections of hundreds of thousands or even millions of stars in a dense, spheroidal region -- distributed irregularly in all directions.

For today's object, we're taking a look at Messier 2, the second object (and first globular cluster) to be catalogued by Charles Messier and his assistant, Pierre Méchain. 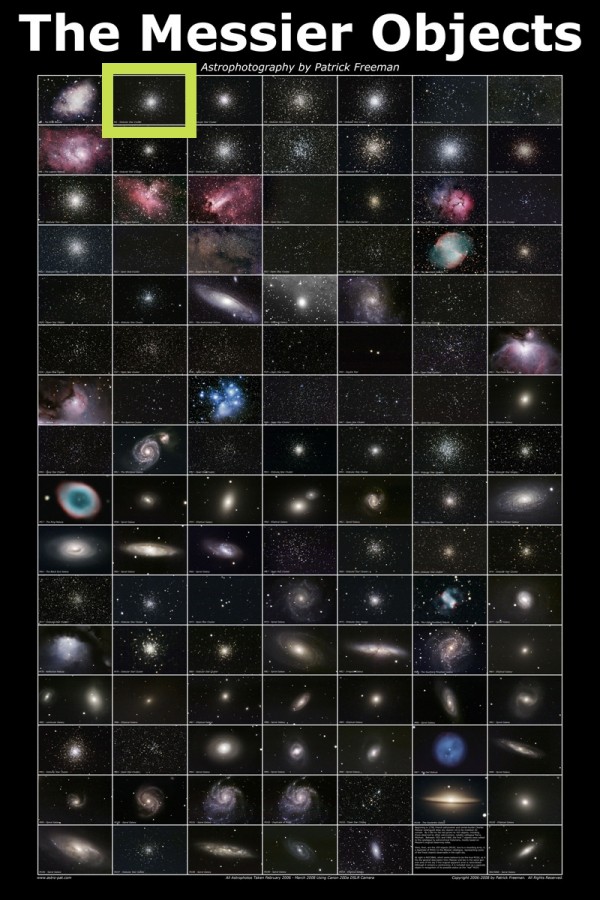 During the summer months -- from June through September -- the Summer Triangle is a prominent asterism of three stars far brighter than all others in a rather large area of the sky. If you can wait until after midnight, on the eastern horizon, the constellation of Aquarius will begin to rise directly beneath the triangle. And with it, today's object of interest, Messier 2. Here's how to pinpoint it in earnest. 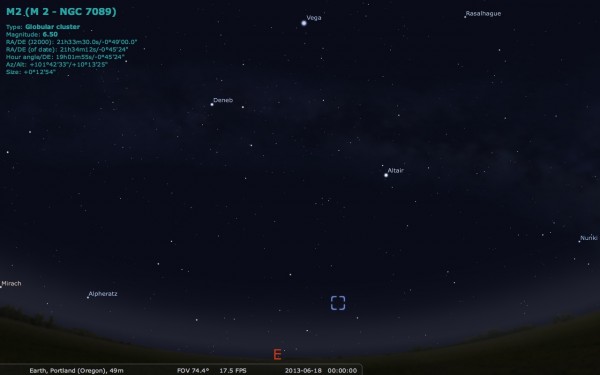 While not as bright or prominent as Deneb, Vega or Altair, the three stars of the Summer Triangle, there are three relatively bright stars that make a right triangle that stand out in their own region of the sky: Enif, closest to the Summer Triangle, Sadalmelik, the "right angle" of the right triangle, and Sadalsuud, the closest of these bright stars to Messier 2, which is just five degrees away. 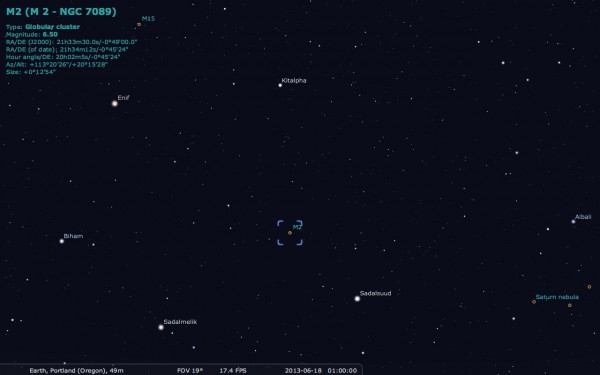 Invisible to the naked eye but easy to find in binoculars or even a low-power telescope, Messier 2 will appear to be no more than a large fuzzball unless you've got a very impressive telescope (10" or bigger), or a lot of time and a good quality camera. It's nested just to the west of three stars at the limit of averted human naked-eye vision. 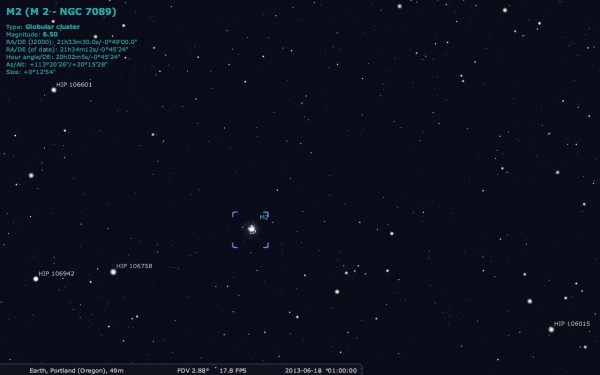 But Messier 2 is a remarkable object in its own right. Globular clusters are some of the oldest objects in the Universe; our Universe is some 13.8 billion years old, and Messier 2, some 150,000 stars strong, has an estimated age of about 13 billion years, meaning it likely formed when the Universe was just 6% of its current age! 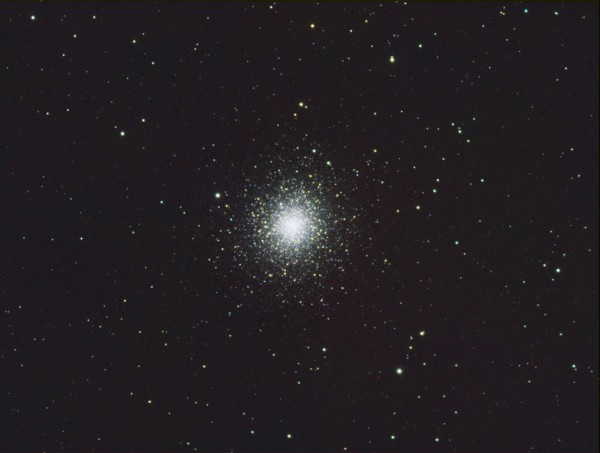 Globular clusters are curiosities, because no one's 100% sure how they formed. They have a very suspicious mass that's just about equal to the Jeans' instability mass (about 106 solar masses), or the smallest independent structure that could have existed (without getting washed out) at the time that neutral atoms first formed, when the Universe was some 380,000 years old. 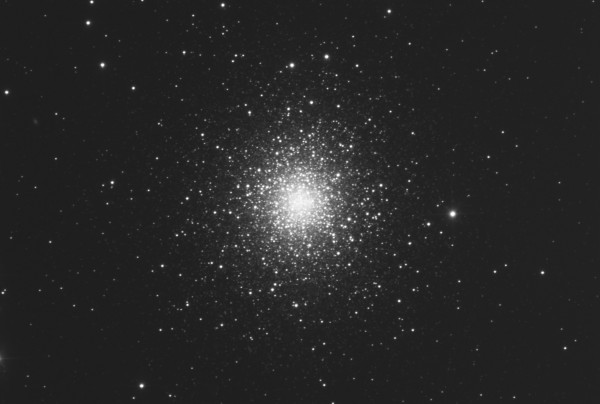 Formed from the collapse of a gas cloud, something that's going to form a globular cluster could easily take many hundreds of millions of years (or even a few billion years) to finally collapse and form stars; we find anywhere from hundreds to tens of thousands of globular clusters around galaxies in the Universe. Messier 2 is a rather large one -- at 175 light years in diameter -- and has one of the densest cores. 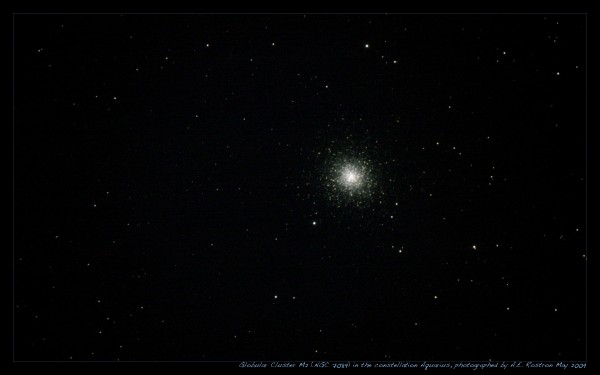 Globular clusters are classed on a scale of I to XII, with I being the densest at the center and XII being the most diffuse. Messier 2 is, fittingly, class II, with a very dense central region. The reason you need such a large telescope to resolve individual stars is twofold: one, because it's some 37,000 light-years away, some 150% as far away as the center of our galaxy, and two, because all of the stars are so old, only the rare blue stragglers and the Sun-like stars going through the final stages of their life will appear prominent. That's why the brightest star in M2 is only of magnitude 13 or so, or about the maximum brightness of Pluto! 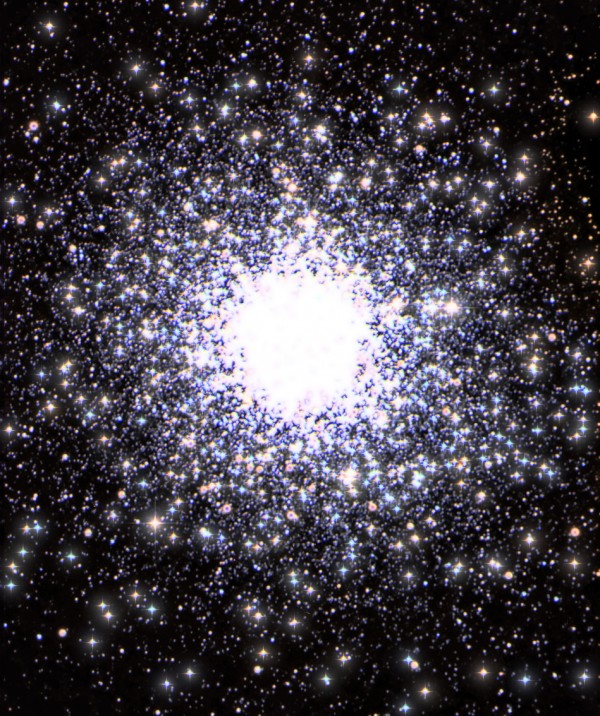 These stars, by-and-large, because they're much older than our Sun, they have very few heavy elements, or anything beyond Hydrogen and Helium in the periodic table. Compared to our own star, they have just 2% of the heavy elements that we do, making Earth-like planets (not to mention Earth-like life) nearly certain to be a rarity in these clusters.

In very large telescopes (16" and above), you might even be able to see that there's a faint dust lane running through this globular! 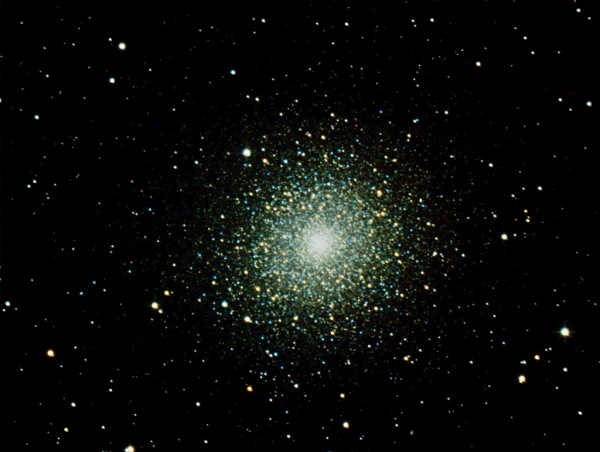 Observations in other wavelengths, such as the infrared, don't reveal very much more about globular clusters than visible light images, since practically all the stars are relatively cool and low-luminosity. But, as is my wont to show you, when there's a Hubble Space Telescope image available, you can really get a glimpse into the sheer stellar density of these globulars! 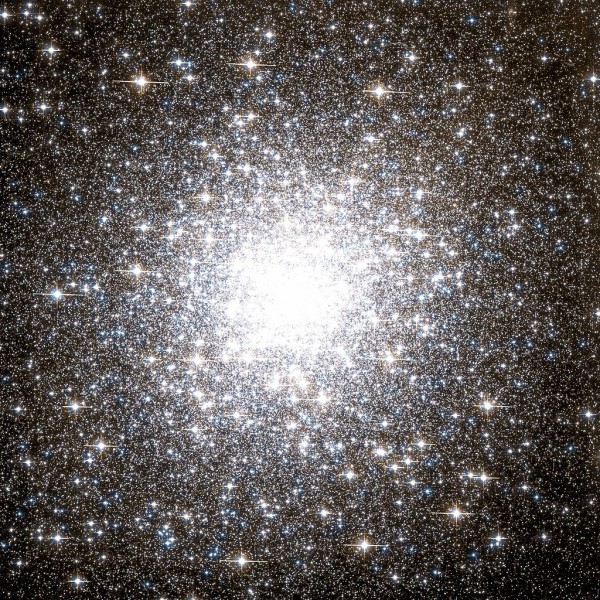 I've grabbed the highest-resolution image available and taken a cut through the center; the Hubble image is so saturated that the central portion appears as just a star-infested blur!

And that'll do it for another Messier Monday! Including today’s entry, we’ve taken a look at the following Messier objects:

Come back next week, where we'll introduce you to another one of the spectacular, deep-sky wonders of the Messier catalogue. Only here, only on Messier Monday!

Very cool post. I'm fascinated by your comment about Jean's Instability Mass. What's the distribution of masses of globular clusters, and does it cut off above a certain limit?

Wow! Other than the low heavy metals... It's surely a great place to start an interstellar empire with the suns so densely packed

This type of star cluster ~ does an average & rare life-sustaining planet [say 2/3rds of the way out from the centre like Earth] experience more frequent [& closer] GRBs compared with our situation?

Or am I talking rubbish? :)

Michael @2: GRBs are not the issue (I believe those are extragalactic), but having lots of nearby supernovae would be. Orbital stability in the habitable zone is also an issue with all of those stars around. And I expect that the low metallicity is a dealbreaker, because that means you don't have much carbon and oxygen around (remember that to an astrophysicist, any element heavier than helium is a metal).

No iron core: no magnetic field too.

The stars are still quite distant from each other, the night sky would be bright, but nowhere near the earth with a full moon, or even quarter moon.

It would also take less time for chaos to throw a monkey in the works of a planet trying to survive long in the habitable zone to produce life of even vaguely advanced status.

Our attempt to contact the universe by beaming a message to M13 wasn't really a smart move scientifically.

But it probably helped get the science funding.

No iron core: no magnetic field too.

You can get an internal magnetic field without an iron core. Any conducting fluid will do, as long as you have enough convection to create a dynamo. The Sun does it with the plasma inside. Jupiter's core is under enough pressure to push hydrogen into what chemists call a metallic phase, and that seems to be enough. True, you need an iron core (or something involving an even less common metal) if you are talking about a rocky planet, but low metallicity means you don't have any rocky planets--you don't have enough silicon around, either.