"Now, this is not the end. It is not even the beginning of the end. But it is, perhaps, the end of the beginning." -Winston Churchill

To kick off every week for nearly a year now, we've begun it with Messier Monday, where we take an in-depth look at the 110 deep-sky objects that make up the first elaborate catalogue of fixed night-sky wonders that could possibly be confused for transient comets. Originally, when first published, this catalogue was made up of 103 objects; the final 7 were added posthumously. Each one tells its own unique story, yet all of them tell a sliver of our own story, and give us a window into our place in the cosmos. 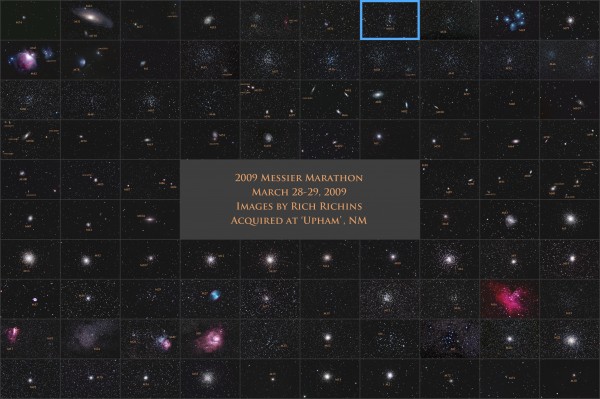 Image credit: Rich Richins, of all 110 Messier objects (in no particular order), from a 2009 marathon.

Today, let's take a look at the very last object in the original catalogue as it was published by Messier: the rich star cluster in Cassiopeia, Messier 103. After sunset (or, really, at any time) tonight, look towards the north from anywhere above the Earth's equator. 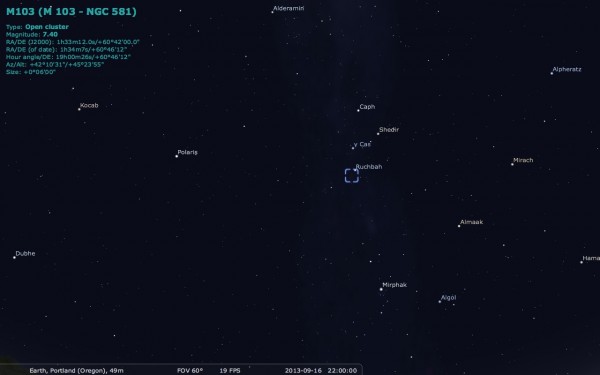 Polaris -- the bright star located almost exactly at the north celestial pole -- is visible at all times (with clear skies and horizons) from all locations in the northern hemisphere. The entire sky appears to rotate around this point, and it's flanked on opposite sides by two prominent configurations of familiar stars: the Big Dipper, shown off-screen to the left (except for the tip of the "cup", Dubhe), and Cassiopeia, the "W" to the right of Polaris in the image above. To locate Messier 103, look to the bottom of the first "V" in the "W" at the bright star Ruchbah. 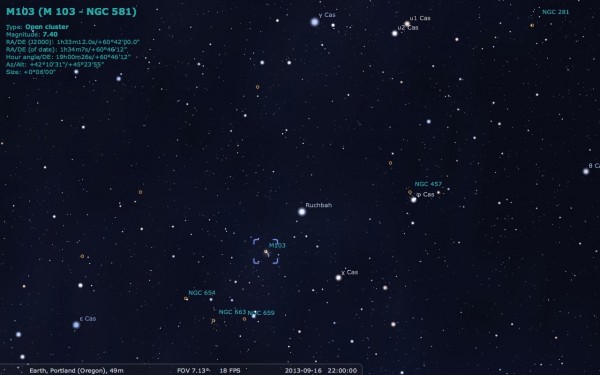 Even on a night with a bright Moon (like tonight), even a pair of binoculars is revealing enough that if you look at Ruchbah, and head over just one degree towards the first star in the "W" of Cassiopeia (ε Cas), you can't miss M103, just slightly "below" the imaginary line that connects the two. 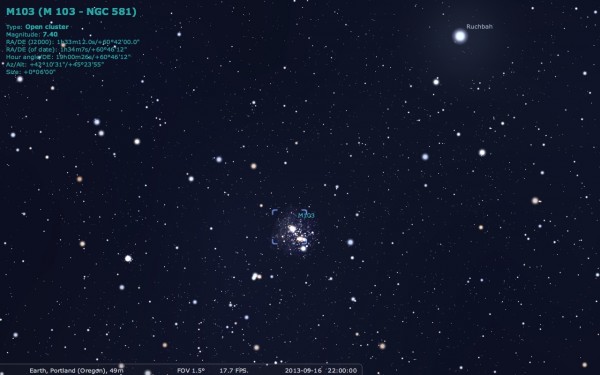 This is one of the smallest open clusters in Messier's famed catalogue, just a tenth-of-a-degree (or 6') in diameter. Yet, located in the plane of the Milky Way (albeit far away from the galactic center), Messier 103 is a remarkable object for teaching us about the young clusters where the galaxy's newest stars reside. 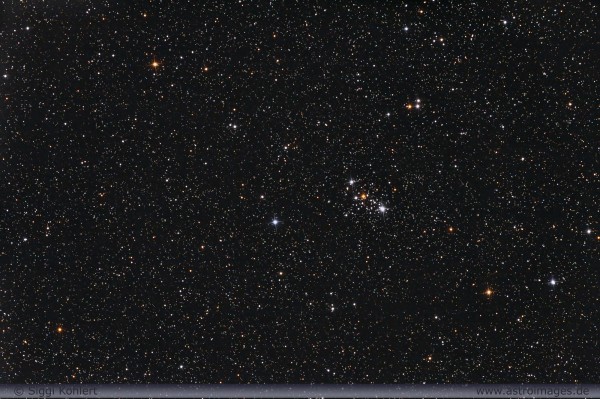 Silhouetted against the dense star field of the galactic disk, there's one star -- a bright, blue triple star -- that clearly outshines all the others when you look towards this young cluster. Surprisingly, this star is definitively not a member of M103, but rather a foreground star known as Struve 131, a blue supergiant just a few hundred light-years away. But Messier 103 is located some 8,500-9,200 light-years away, making it (probably) the most distant open star cluster in the entire Messier catalogue! 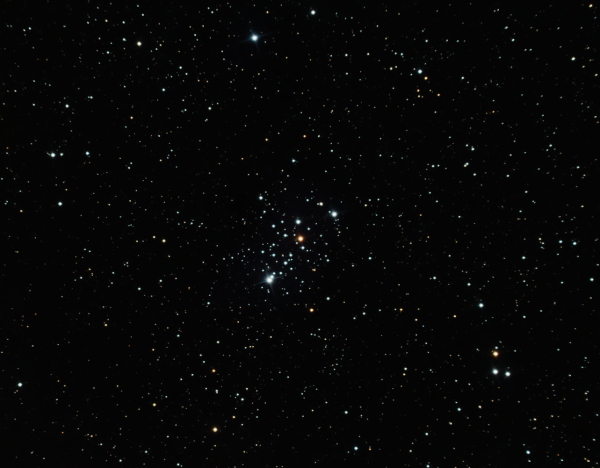 If we focus on the colors of the stars in this cluster -- ignoring the blue supergiant at the lower left, above -- you'll see a large number of bright, blue stars, and one bright red one in the center. It's the colors of these stars, more than any other property, that teach us the most about the cluster itself. 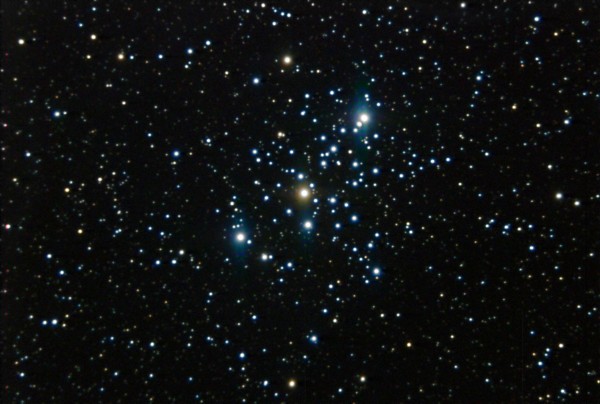 Newborn stars come in a wide variety of colors, brightnesses and masses: the most massive ones are the brightest and bluest, while the less massive ones shine less brightly and give off lower-energy, redder light. But the most massive ones also burn through their fuel the fastest, and when they run out of hydrogen fuel in their core, they expand into red giants, burning heavier elements until they run out of those, too, and die in planetary nebulae or -- if they're massive enough -- supernovae!

The brightest hydrogen-burning stars in M103 are still very young, blue and massive, but the red one in the center is, in fact, a red giant that left the main sequence only a few million years ago, at most. 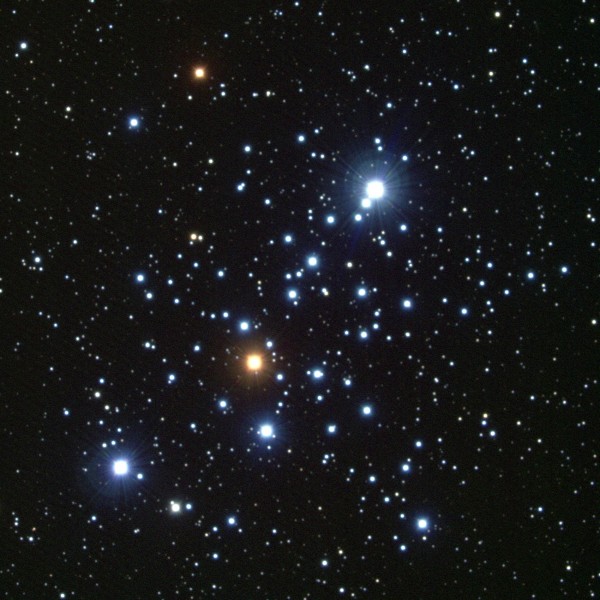 The abundance of intrinsically bright, blue stars, as well as the absence of the brightest class of blue stars -- the O-stars -- allow us to place the age of this cluster at a mere 22-25 million years, or just around 30% the age of the Pleiades.

There are at least 172 member stars in this cluster, although -- based on what we know of open clusters -- there may be as many as 1,000 stars or more in there. An interesting take on this cluster comes from 2MASS (the two-micron all-sky survey), which looks in the far infrared portion of the spectrum, preferentially highlighting redder stars and muting the intrinsically brighter, bluer stars. 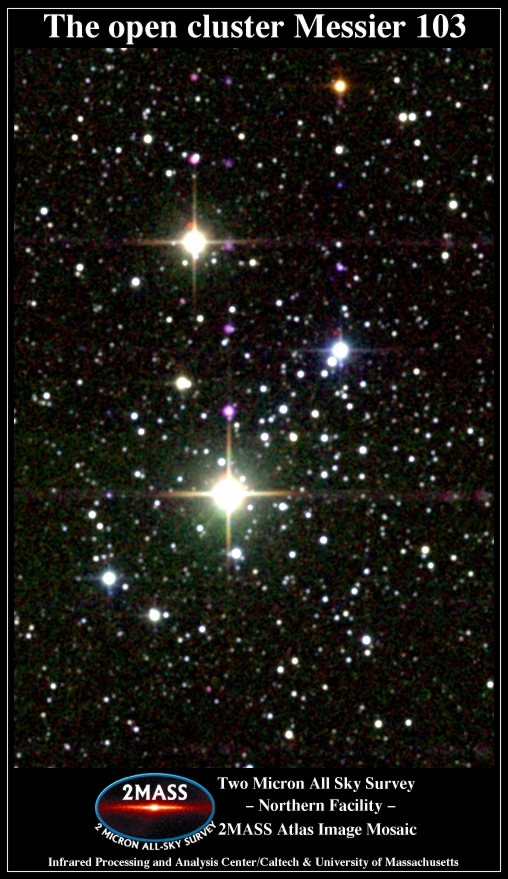 The best true-color "amateur" image I could find of this was taken by Jim Misti, although, given the fact that he used a 32" (0.8-meter) telescope, amateur is a loose term. 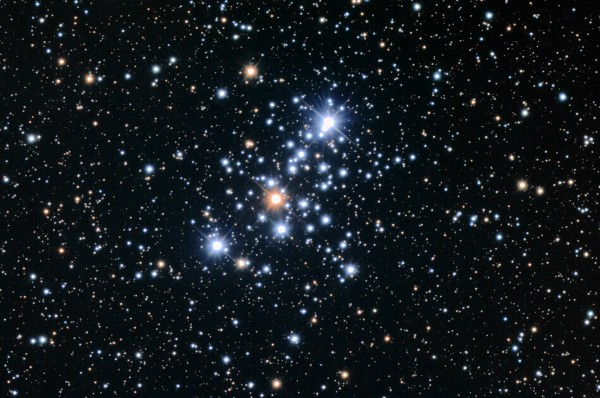 Beyond that, there is a Hubble space telescope image. Although my image processing skills leave a lot to be desired, I did want to point out that there are more than 1,200 identifiable (albeit, many may be spurious) sources here, and I've done my best to clean up the Hubble image so you can scroll through just a tiny portion of this cluster, although dead pixels still remain. It may not look impressive, but remember just what a tiny portion of the cluster the Hubble space telescope actually images; you're seeing faint stars as points-of-light that aren't even visible in any other image presented here!

Image credit: NASA, ESA, the Hubble Legacy Archive and me.

For those of you who want to see something better than that (and I don't blame you), here's a high-resolution look through the core of Messier 103 thanks to Jim Misti, which reveals just how rich this cluster -- as well as the outskirts of the galactic plane -- happen to actually be!

And that will do it for another Messier Monday! Including today’s entry, we’ve taken a look at the following Messier objects:

Come back next week for yet another one, as we won't stop until we've covered them all!

See, that's the problem with open clusters. They're too open. If they were more globby, the Hubble picture would be great.

Or they need to at least have some nebulosity. A few scattered stars can look amazing if surrounded by whispy clouds.

Can someone point me at M103's suggestion box? I have some more ideas on how it could improve its image.