Messier Monday: A Spiral with an Active Black Hole, M106

"The proverb warns that 'You should not bite the hand that feeds you.' But maybe you should, if it prevents you from feeding yourself." -Thomas Szasz

But on this Messier Monday, you're lucky enough that you're about to be introduced to one of the great northern galaxies of the Messier catalogue that is feeding itself! There are 110 deep-sky, non-transient objects that make up the Messier catalogue, and a full 40 of them are galaxies, the most numerous and most distant of all the types of objects catalogued by Messier. 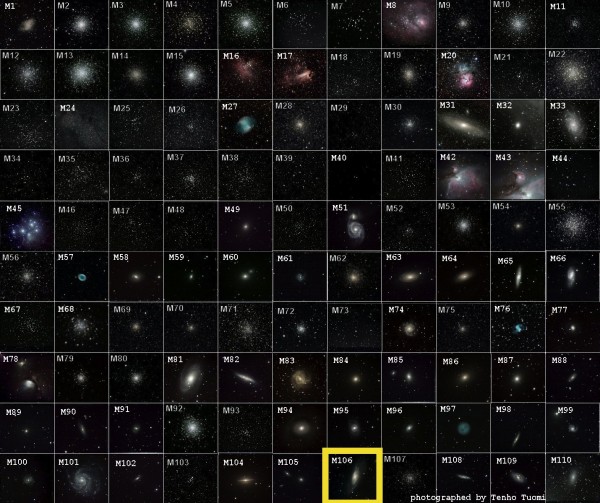 Today, we're taking a deep look at one of the last additions to that catalogue -- as all entries above M103 were added posthumously -- yet that makes these later objects no less spectacular. For, you see, Messier's 106th object is a large, nearby, sweeping spiral galaxy that holds a true rarity at its core: an active, feeding supermassive black hole! As the cold temperatures continue to batter the high northern latitudes, this is a special winter's night treat for those of you above the 45th parallel; for the rest of you, this is a very late-night or early morning object. 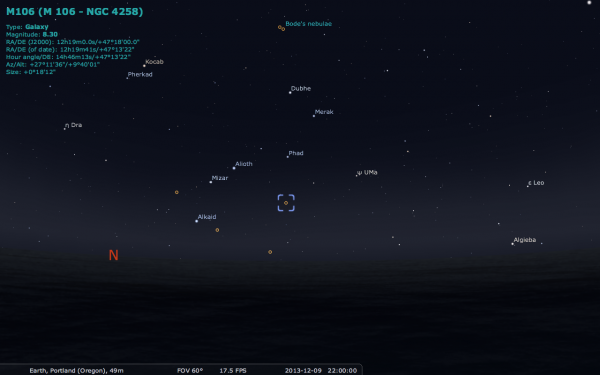 To find it, your best bet is to locate the Big Dipper. Though it's low on the horizon in the early part of the night at this time of year, the higher northern latitudes will still have the entire dipper illuminating the night sky even shortly after sunset. Some of you may be used to connecting the bottom star of the "cup" closest to the handle (Phad) to the outer tip of the cup (Dubhe), and traveling that same distance again to locate the bright, prominent pair of galaxies Messier 81 and Messier 82.

But if you instead travel in the other direction -- from Dubhe to Phad and beyond -- you can instead encounter Messier 106. 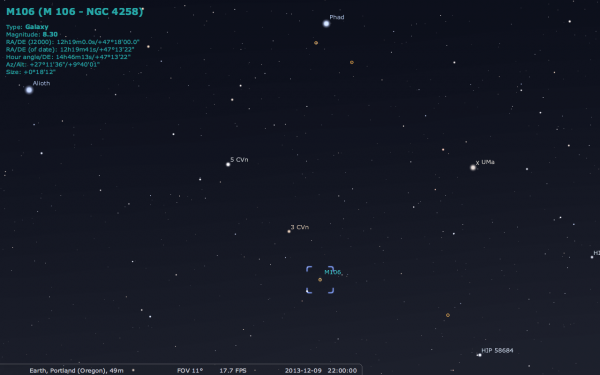 As you travel along that line, you'll travel in between two clearly visible naked eye stars (χ Ursae Majoris and 5 Canum Venaticorum) and just past a fainter, redder one: 3 Canum Venaticorum. Look just a little farther, and you'll come to a bright "smudge" on the sky; that's the brilliant spiral you're looking for, Messier 106. 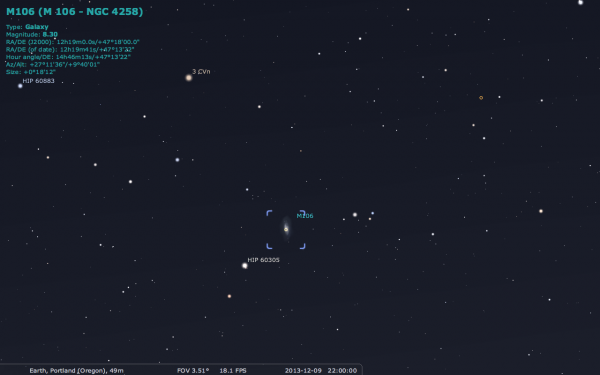 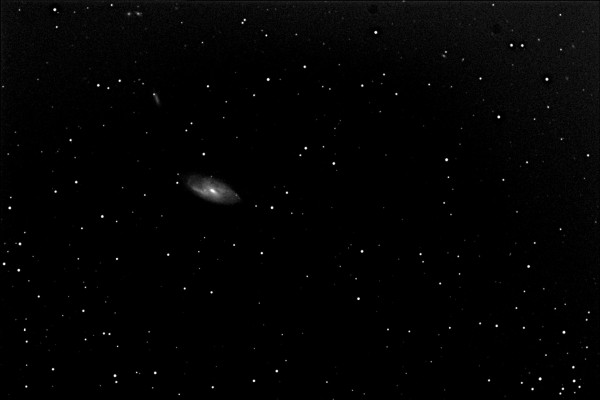 A centrally bright region, ellipsoidal in shape, asymmetrical with fading brightness as you move towards the edges. But as we now know, this is much, much more than a mere smudge on the sky.

An extremely large, intrinsically bright galaxy, Messier 106 is actually the largest member of a substantial group of galaxies 26 million light years away, and bigger than our own local group!

There's something else very special about it: you may remember that a few galaxies are very active at their core, emitting a combination of X-rays and radio waves from the very center. This class is known as Seyfert galaxies after Carl Seyfert, and we recently examined another: Messier 77. But in many ways, Messier 106 is even more spectacular! 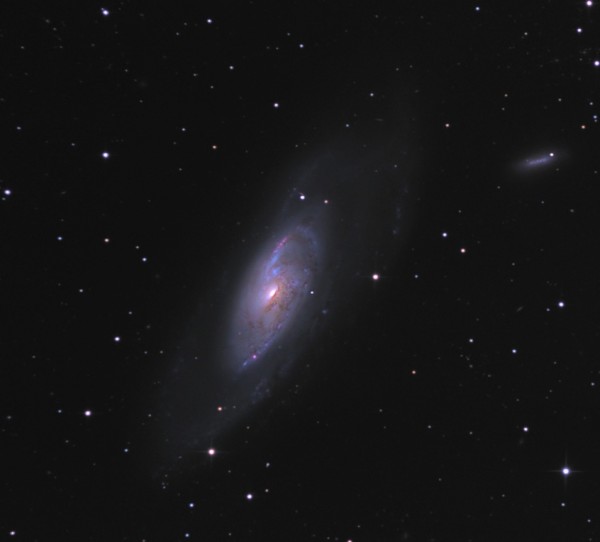 You see, this galaxy also has a very dense disk, in addition to the outer, very extended arms. And the dense disk is doing something truly remarkable and uncommon: it emits a very special type of microwave radiation! You see, just as a common laser results in light emitted by stimulating the atoms inside (which is why it stands for Light Amplification by Stimulated Emission of Radiation), the same process can cause atoms to emit light in the microwave creating a natural laser-like process known as a MASER, where the "L" is replaced by an "M" for Microwave!

Perhaps most amazingly; this happens naturally! 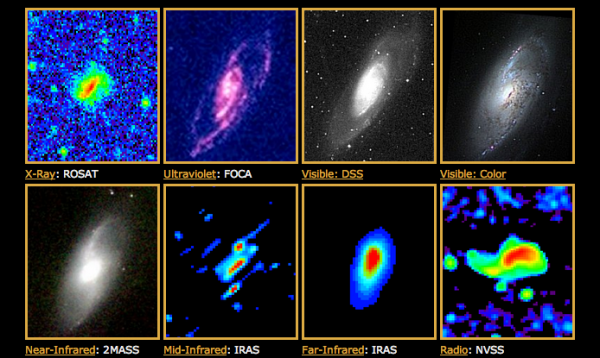 We can see a lot of really interesting activity by looking at different wavelengths, including ultra-hot, new stars traced out along the ultraviolet, the central X-Ray and radio source, a very dense core of stars at the center (which, at one point, was the highest known concentration of stars in the Universe) with some 40 million solar masses in there, and, remarkably, a calm disk of warm dust (in pink/red, below), where new stars are about to continue forming! 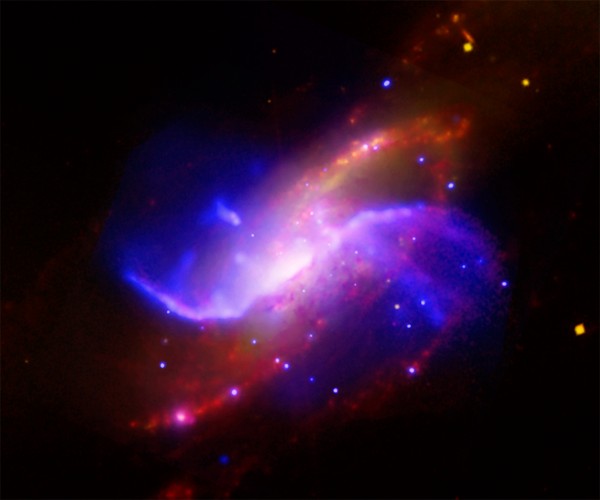 But where you see the X-rays? That's evidence of a starburst, or an incredible burst of star formation that's so large it dominates the radiation coming from an entire galaxy!

The visible -- on its own -- doesn't do this justice, but a remarkable composite teased out by legendary astrophotographer R Jay Gabany really shows this off! 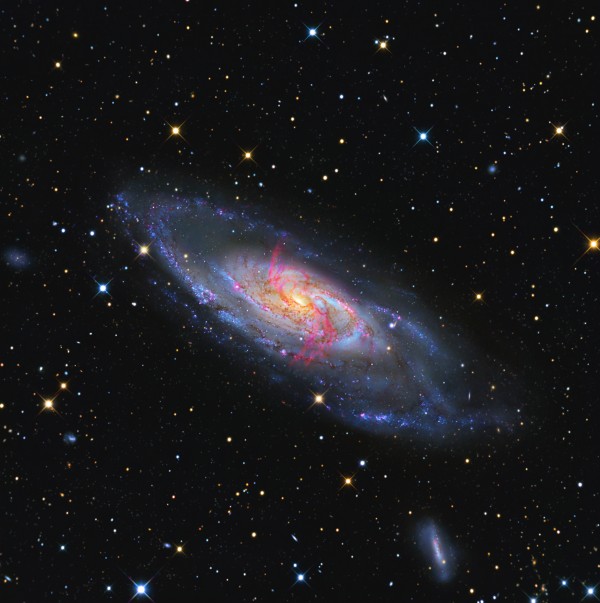 Receding from us at nearly 500 km/sec, this galaxy -- like most -- will continue to disappear from view as the Universe expands. But perhaps the best view of this galaxy ever was released by the Hubble Space Telescope earlier this year, and is truly a wondrous sight to marvel at. Take a look at the entire mosaic (and click for a giant version, if you dare) below, 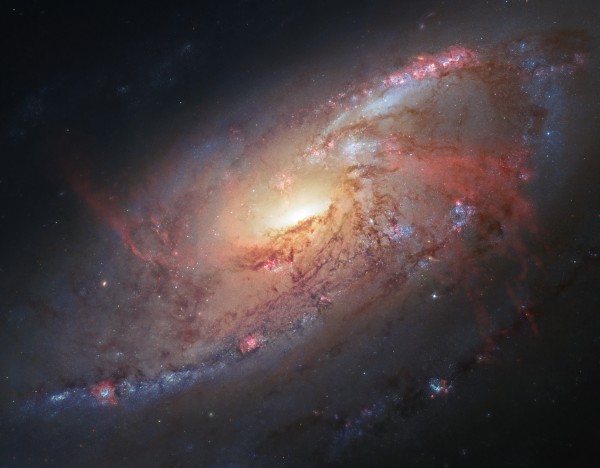 and then enjoy this full-resolution (rotated) fly-through of the center of this behemoth!

The Universe is a wonderful place, and it's objects like this that make me appreciate just how truly lucky we are to have the glimpses of it that we do! That wraps up another Messier Monday, and including today, we’ve looked at the following objects:

There's so much more to learn, but there are few greater joys than knowing just a little bit more about the Universe today than we did yesterday! Thanks for sharing another Messier Monday with me, and come back next week for another deep look at another of the night sky's wonders!

Thanks once again, Ethan, for a magical presentation. Such a pity we do not get to see this object down here. However, 2 years hence should see me back home in Canada, where the opportunity will come 'round.
Damn fine photos.

Thanks once again, Ethan, for a magical presentation.