"The deeper reason we fear our own glory is that once we let others see it, they will have seen the truest us, and that is nakedness indeed. [...] It is an awkward thing to shimmer when everyone else around you is not, to walk in your glory with an unveiled face when everyone else is veiling his." -John Eldredge

Welcome back to another Messier Monday, where the glittering wonders of the night sky -- visible to anyone at the right latitudes with even simple equipment -- are on display for everyone. The bright collection of 110 deep-sky wonders include star clusters, globular clusters, galaxies, as well as star-forming regions and nebulae, and represent some of the most easily spotted natural wonders of the Universe. As the seasons transition, a whole new set of objects becomes visible in the early night sky. 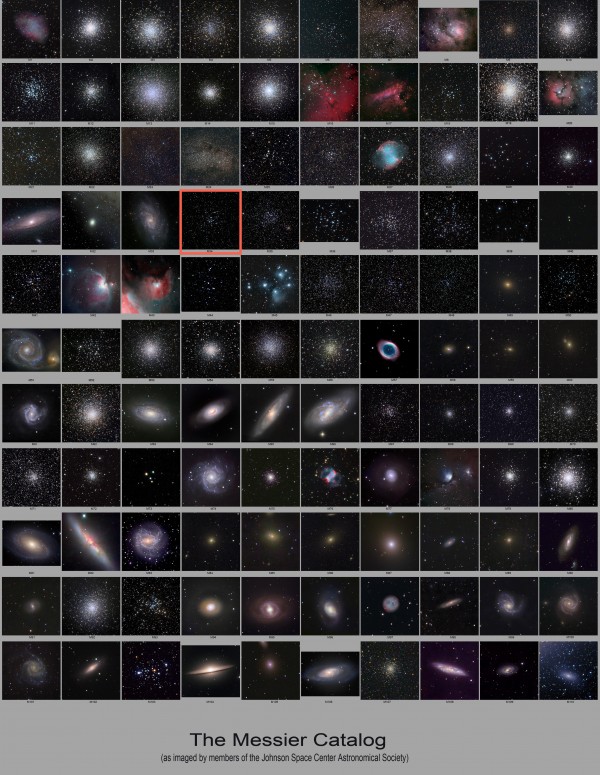 For today, let's focus on one of the closest, brightest open clusters in the night sky, flying high over the eastern horizon (or just north of it) after the skies darken tonight. Although the bright Moon may make it difficult to look in on many extended objects tonight, the open cluster Messier 34 still makes for a fantastic target under otherwise dark skies, even with the naked eye! Here's how to find it. 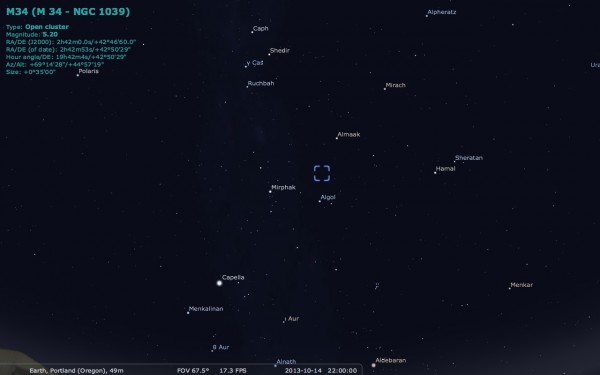 Some of the most prominent stars in the entire Northern Hemisphere can be found over the eastern horizon or just to the north of it, including the (currently low-flying) very bright stars Capella and Aldebaran, the familiar and high-flying "W" of Cassiopeia, and the line of four prominent, bright stars (Mirphak, Almaak, Mirach and Alpheratz) straddling the constellations of Perseus and Andromeda.

Just below the imaginary line connecting Mirphak to Almaak, that's the region we need to peer into to find Messier 34. 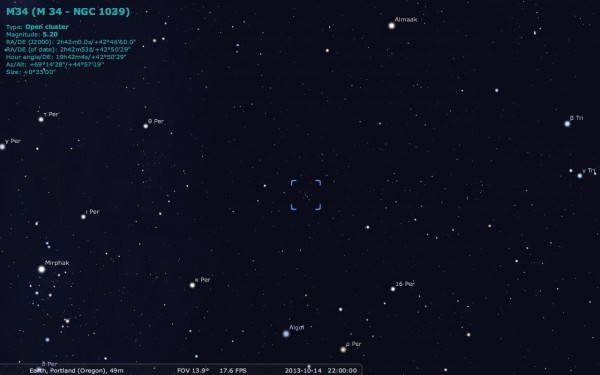 Below the imaginary line connecting Mirphak to Almaak is the bright, prominent star Algol. If you look in the vicinity of Mirphak towards bright, blue Algol, you'll see a rough "line" of stars that appears to have a kink towards the end. The last star labeled above in that kink, 16 Persei, is clearly visible to the naked eye even in light-polluted skies. But instead of continuing on from that imaginary line of five stars, if you hook around back towards Mirphak instead, you'll see two dimmer (but still naked-eye) stars, 12 Persei and 14 Persei; Messier 34 lies between them. 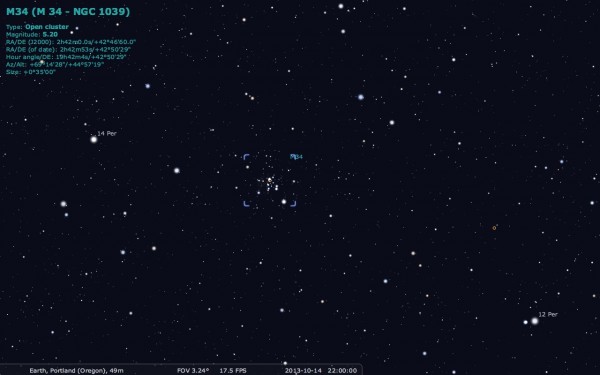 Although none of the individual stars in M34 are bright enough to be visible to the naked eye, the entire cluster -- visible as a faint, fuzzy object -- can be seen in a clear, dark sky. At more than half-a-degree wide, or just over the size of a full Moon, this is one of the more prominent open star clusters visible from Earth. And through a telescope or pair of binoculars, there's quite a lot to be seen. 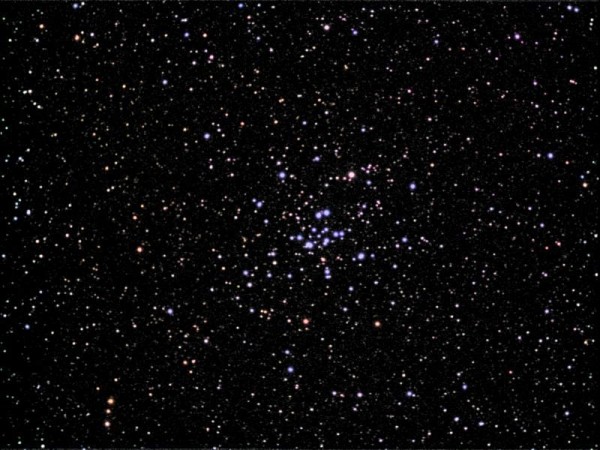 Yes, you can easily resolve the individual stars, as Messier himself did, noting that M34 was a

Cluster of small stars, between the head of Medusa (Algol) & the left foot of Andromeda, a little below the parallel of Gamma [Andromedae]...

but there's so much more to be seen than just individual stars. 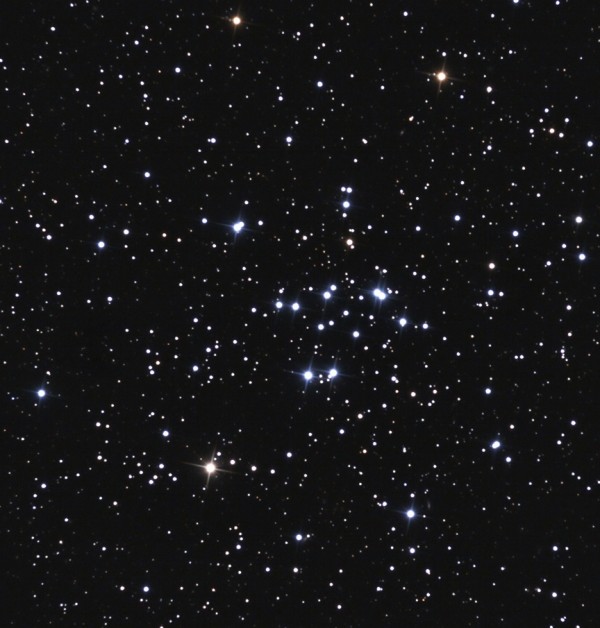 Colors, for one! The bright blue glow of the brightest members tells us that this is a relatively young star cluster, while the lack of dusty nebulosity tells us that it isn't too young. In reality, all star clusters have star color-and-magnitude combinations that trace out a specific pattern if you plot them; this pattern is known as their Hertzsprung-Russell diagram. The main line -- from lower right to upper left -- that the stars follow is known as the main sequence, and where the stars appear to turn off of it (by heading towards the upper right) allows us to date the age of each cluster.

In the particular case of Messier 34, it turns out to be right around 200 million years since its formation, although estimates range from 180 million all the way up to 250 million. Why? It's not just the bright blue stars that are there; it's a combination of the ones that aren't there and the red giants that are, or heavier, brighter, bluer stars that have burned up the hydrogen in their core and evolved off that main sequence. 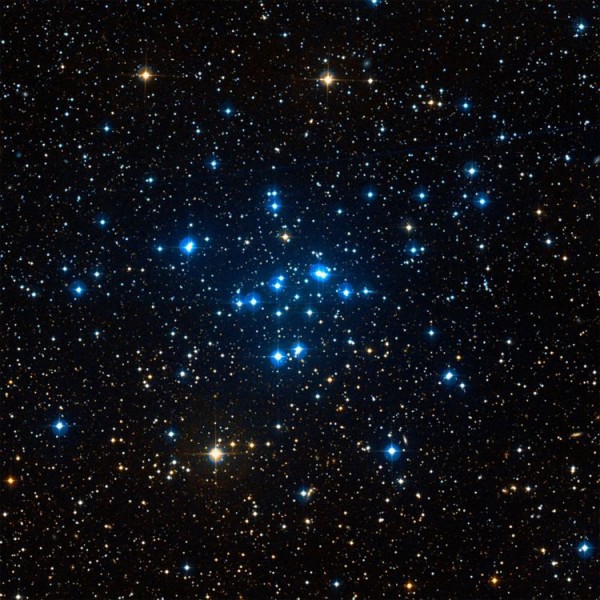 One of the more interesting things about Messier 34 is that it's so close; of all the objects (not counting mistakes) in the Messier Catalogue, there are only five objects that are closer! At a distance of only 1,500 light-years, it's been relatively easy for our most advanced equipment to reveal the intrinsically dimmer, fainter stars inside, something that's helped us to learn a tremendous amount about not only this object, but about star clusters in general.

In fact, there's something very interesting about the lower-mass stars in all recently formed star clusters: they are not yet on the main sequence! 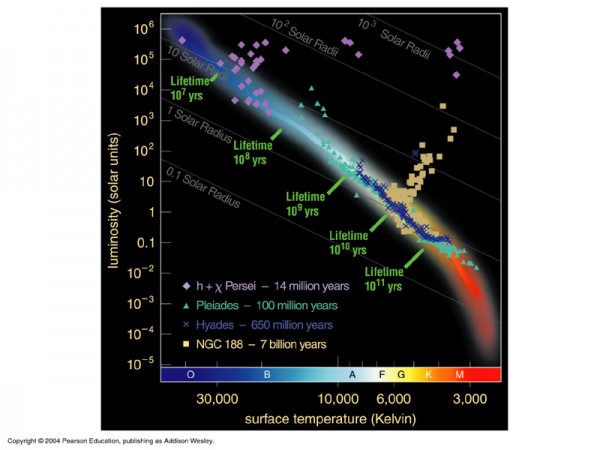 You see, while it's true that higher-mass stars "turn off" the main sequence when they're done burning their core hydrogen, the lower mass stars actually take a very long time to drop in their initial luminosity enough in order to find the main sequence in the first place; they need to drop down to it! Even a cluster 200 million years old (give or take) like M34 hasn't lived for long enough for stars less than about half our Sun's mass to reach the main sequence yet, and it will be hundreds of millions of years more before they do!

So while there are 19 known white dwarfs, or stars that have already burned all their core hydrogen, become red giants, blown off their outer layers and contracted down to a degenerate object, a full half (if not more) of the stars in M34 haven't even reached their equilibrium hydrogen-burning state yet! And at the same time, these stars -- having formed some 4.3 billion years after our own Sun formed -- offer something our Solar System doesn't. 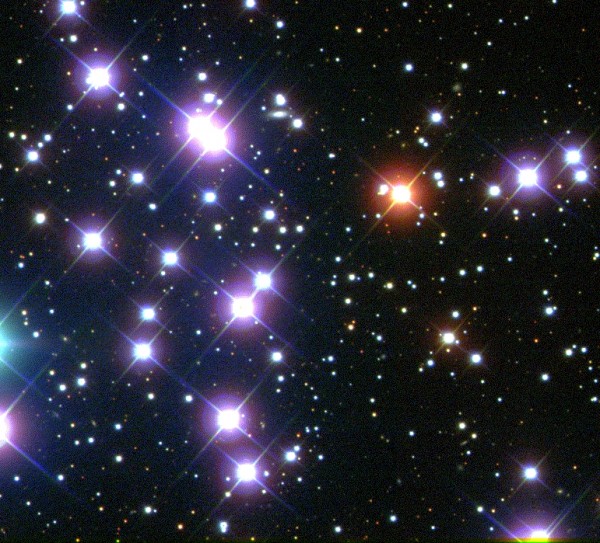 Having formed later in the Universe, these stars have more heavy elements than we do; some 17% more iron, carbon, oxygen, and most of the other measurable elements (except nickel, for some reason) than our Sun does. So any worlds forming around these stars might have some particular interesting and unique chemistry happening on them, and may be even more likely to have the seeds of life on them than worlds that formed at the same time as Earth!

And that will bring us to the close of another Messier Monday. Including today's entry, we've looked at the following objects so far, a full 52, which means we've been doing it every Monday for a year now:

Come back next week, where another deep-sky wonder awaits you, only here on Messier Monday!

"Do not look at stars as bright spots only. Try to take in the vastness of the universe." -Maria Mitchell It's time again for Messier Monday, where we highlight the various wonderous deep-sky objects of the night, and show you how to find them against the expansive backdrop of stars. The (almost)…

"Books serve to show a man that those original thoughts of his aren't very new at all." -Abraham Lincoln It might be Veterans Day / Armistice Day all around the world, but it's still Messier Monday here on Starts With A Bang! We may have been fighting wars for all of human history, but nearly all…

"Dream no small dreams, for they have no power to move the hearts of men." -Johann Wolfgang von Goethe Welcome back to yet another Messier Monday here on Starts With A Bang! Each Monday, we highlight one of the 110 deep-sky objects that make up the Messier catalogue, showing you where and how to…

"A sister is both your mirror - and your opposite." -Elizabeth Fishel With 110 deep-sky wonders to choose from in the Messier catalogue, our long-running series on Messier Monday promises to keep us busy for some time to come! As we've finally passed the winter solstice here in the Northern…

Congratulations on the one-year mark. Here's to the next year (and to the five weeks after that)!

"One of the more interesting things about Messier 34 is that it’s so close; of all the objects (not counting mistakes) in the Messier Catalogue, there are only five objects that are closer!

Which ones are those? I'm guessing off the top of my head the Plieades, the one double star in the Messier catalogue - M40 - as the closest of all plus or maybe M11 Wild Duck cluster, perhaps M6 & M7 in Scorpius as the closer ones - am I right?

M40 is definitely closer (as is maybe M73), but I can't in good conscience count them in a discussion of distance among the Messier objects. Even though we've been doing one a week for a year now, there's still more than half the catalogue to go!

Thanks for that answer Ethan! :-)

Congrats! (A week and some late)