“Oh leave the Wise our measures to collate. One thing at least is certain, light has weight. One thing is certain and the rest debate. Light rays, when near the Sun, do not go straight.” -Arthur Eddington

It might seem like General Relativity has been around forever, but it's been less than a century since it was released and confirmed. In fact, today marks the 95th anniversary of the solar eclipse that changed our view of the Universe! 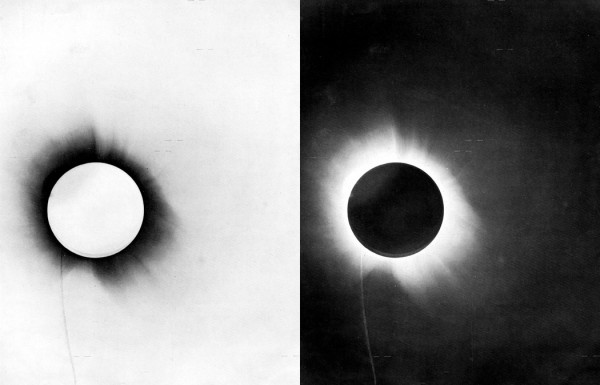 Actual negative and positive photographic plates from the 1919 Eddington Expedition, via http://www.sciencebuzz.org/buzz-tags/eddington-expedition.

The reaction of the world was priceless, particularly of the New York Times when all was said and done. 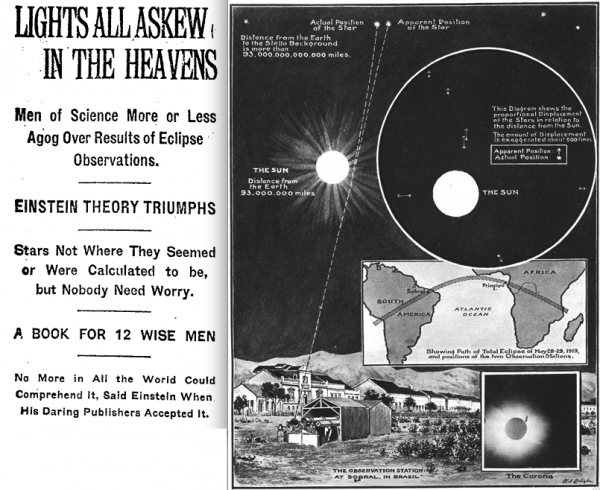 Whether you've heard this story a thousand times or never once before, go read and enjoy this walk down memory lane, and find out about the day that physics, relativity and our understanding of space and time changed forever!

Very cool description, thanks. Also, I would wager that while we view the word "agog" as amusing, at the time the headline was published it was a very good description of the reactions of more than a few scientists (and others).

Lacks substance, but I love your WHOLE idea and a lot of posts have substance. Found this guy, was a teacher and has PhysicsViewpoint.com, great articles, confusing but from the formulas he has some unique conculsions. No commercial interest here just expressing my opinion.

as we know, around 1919 the concept of particle/wave duality did not exist yet. The first quantum revolution was brewing, but hadn't happened yet.

In terms of pre-relativistic physics there was no reason to suggest that propagation of light will be subject to gravity in any degree.

My best guess is that only by the 1930's, with a mature theory of quantum physics developed, it became somewhat meaningful to imagine what would happen to photons in a newtonian gravitational field. As you describe, in such a thought experiment one arrives at a deflection that is about half the value that is predicted by GR.

Surely, in 1919 that thought experiment was too far-fetched to be considered.
But you suggest that in 1919 a case could be made that "Newton’s gravity would bend light".

In 1919 one would expect either of two outcomes: no deflection as per pre-relativistic physics, or the deflection as predicted by General Relativity. The 1919 observations resolved between those two expected possibilities.

Living at a time when direction changing events happen is invigorating. This was one, Hiroshima was another (I don't want to be flippant, but from what I've read that was, at base, an experiment). The HIggs discovery in July seemed to be a flop since it just validated what everybody was doing and believed anyway. Is there anything in the works that might reasonably provide us, we who are here and now, with the vigor of a direction changing event that will make the world sit up and take notice in the next couple of years?