Comments of the Week #16: From the Distant Universe to our Analemma

"And so with the sunshine and the great bursts of leaves growing on the trees, just as things grow in fast movies, I had that familiar conviction that life was beginning over again with the summer." -F. Scott Fitzgerald

The moment of Solstice has passed, and we've officially entered Summer (in the north) here at Starts With A Bang. Of course, that doesn't mean anything is different; just warmer days and different celestial sights visible throughout the night than during other times of year. While I ponder getting my first big light bucket for enjoying the night sky directly, there's still been plenty to ponder as far as the Universe is concerned, and we've done just that this past week! In case you missed anything (or just want a second read-through), here's what we've gone and looked at:

As always, you've had your opportunity to weigh in with your comments; let's take a look at the best of your comments this week and see what you said! 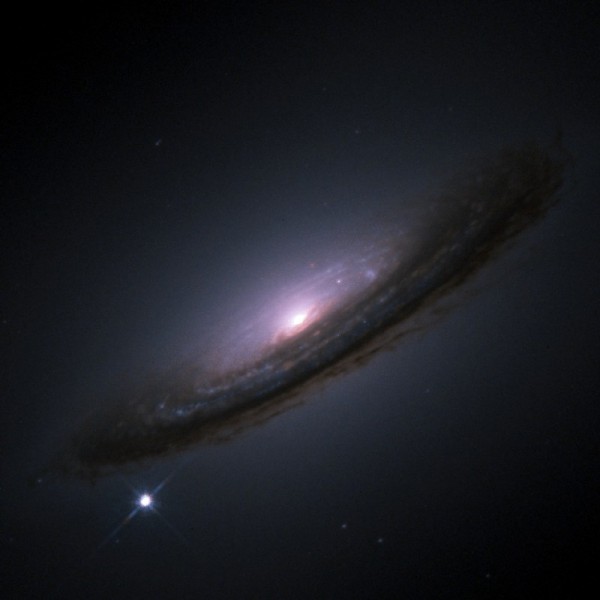 From Omega Centauri on the subject of distances-and-time in the expanding Universe: "There is a bit of circularity to the logic, we are trying to determine the distance versus age in order to verify the expansion history, yet these things depend on the expansion history. Mathematically, it is an implicit, not an explicit method."

Although it is true that the distance-vs.-age relationship does depend on the expansion history, our measurement of distances do not. We can -- as our commenter Michael stated -- look at specific properties of an object and know one of its absolute properties (like brightness), we can measure that same apparent property, and then infer its distance. But there's another caveat here: what we measure as "distance" does, in fact, depend on how we measure it. When you want to measure the distance to a faraway object, there are a lot of different things you could try: you could try and measure how big (in terms of angular size) it looks, you can try and measure how bright (in terms of luminosity) it appears, you can try and measure how old (in years, for example) an object is, etc.

These measurements are functions of redshift (z) as well, and scale with certain unique factors of (1+z). But this means if you measure the apparent size/luminosity/whatever, if you use what we know of astrophysics to compute the intrinsic size/luminosity/whatever, and you also measure the redshift, there is no degeneracy, and you will derive a unique expansion history for the Universe. It's not circular reasoning, it's a self-consistent process with no extra free parameters. (Which is exactly what you want when it comes to figuring something out!) 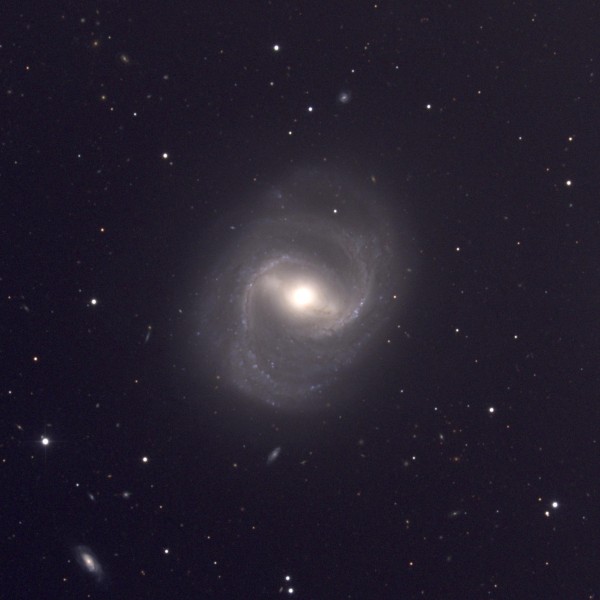 From PJ on our most recent Messier Monday: "With the clouded skies of West Oz of late, one might have to resort to the radio telescope."

Most people don't realize this, but our atmosphere is actually fantastic at absorbing almost all wavelengths of light. There are only two "windows" where light can effective travel to-and-from our planet's surface with practically 100% efficiency:

For this reason, most astronomy is best done from space, but you can still do a remarkable amount of observing, even from low elevations, in those two wavelength ranges. 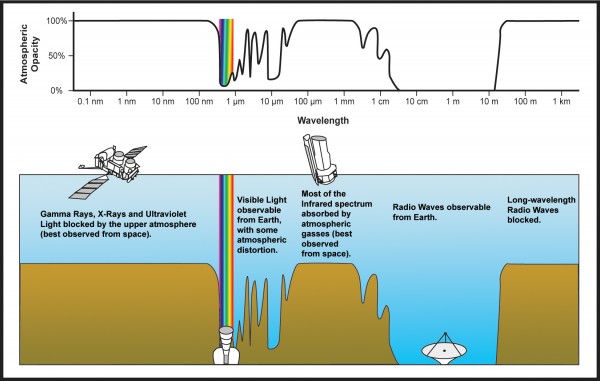 Clouds are, unfortunately, optically thick, meaning that even a thin layer of liquid water droplets in the upper atmosphere can ruin a visible light astronomer's night. (There's a reason that the astronomical community's message board is called Cloudy Nights.) But PJ is absolutely right: radio telescopes are practically unaffected by clouds. Either that, or take a trip to the eastern side of your continent, which I hear has had sunny days and clear skies for weeks on end.

From Diego Giudi (and almost immediately afterwards, by Ciaran) on the science of soccer: "To me, Andrea Pirlo also deserve a link in the article, although he doesn’t score"

It's far less spectacular than either Beckham's 2006 shot or Roberto Carlos' 1997 shot alluded to in the main article, but for all the Italians out there, here's a little present for you.

The amazing thing about this is that it's such a good example of acceleration; the ball starts off with practically zero lateral velocity but a large -- and mostly constant -- lateral acceleration. In just under a second, the ball winds up scooting over some 5 meters (16 feet), all thanks to the Magnus Force! If Uruguay defeats Italy next week, it will mark just the second time in my lifetime -- and the second time in a row -- that football powerhouse Italy doesn't advance beyond the group stage at the World Cup. Will Pirlo's almost-goal be the best Italian highlight of the 2014 tournament?

From Derek on the topic of the Earth's analemma (in a sentiment echoed earlier by wereathiest): "That should be “Earth’s axis is maximally tilted with respect to a plane normal to the line between Earth and the sun”"

Yes, it should! I erroneously stated earlier that the solstices were where the Earth's axis was maximally tilted with respect to the plane of our orbit, but that amount is in fact a constant: 23.4°, changing appreciably only over thousands of years, as our axis wobbles due to the mechanical phenomenon of nutation. 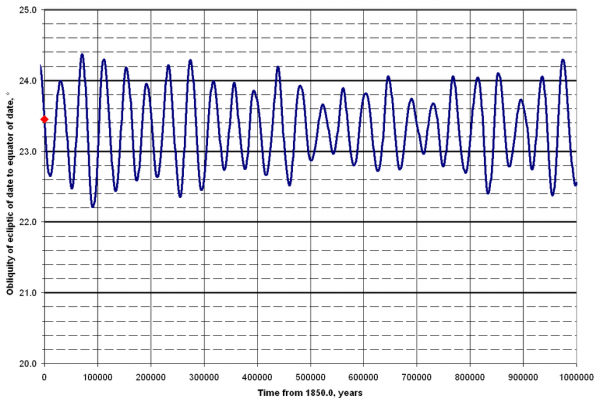 But as the Earth orbits the Sun, the angle formed by our orbital axis and the line formed by the Earth-Sun connection ranges from a "boring" 90° (in both hemispheres, at the equinoxes) to a minimum of 66.6°/maximum of 113.4°, which occurs at the Solstices.

My bad, and thank you for your diligence!

And finally, from Wayne Robinson on the concept of time: "‘Time’ on a clock is such an artificial human concept, to compensate for the fact that the length of a day, a solar day from noon (the time when the Sun is at its highest point in the sky) one day to noon the next day, isn’t 24 hours.
It ranges from 24 hours 20 seconds around the Summer and Winter solstices to 23 hours 59 minutes 40 seconds around the Spring and Autumn equinoxes, so the exact time of noon varies throughout the year.
If you took your 365 day photo at exactly noon each day (instead of, say, 12 midday) wouldn’t the Sun trace a straight vertical line instead of a closed curve?"

You know, it's pretty easy to bash the way we keep time as being somewhat unscientific, and you're not wrong on that count. But think about it for a moment: how useful would time be if it were kept more scientifically? We could have the length of the day vary from 23:59:40 to 24:00:20 as the day's length actually varied, and if we did that, we would, in fact, wind up with an analemma that was a straight line (and a vertical one if you took it at astronomical noon).

But what would the cost be? 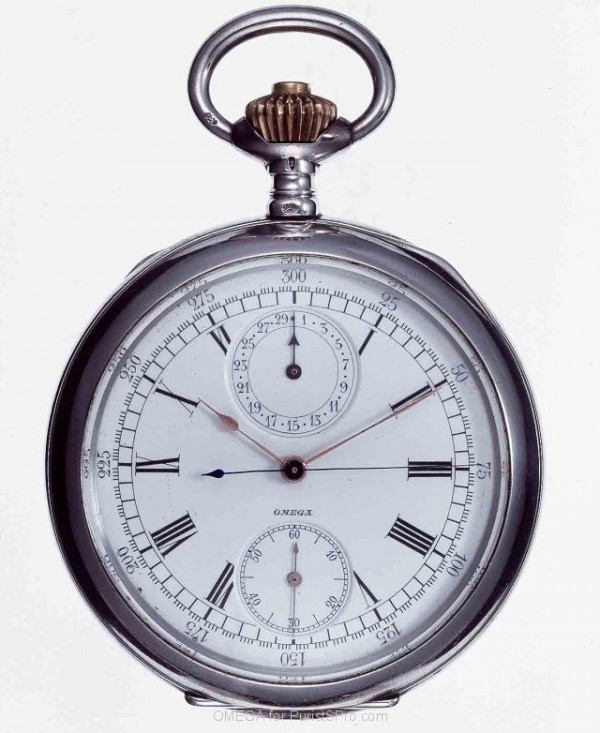 Would we be adding and subtracting seconds (or fractions-of-seconds) from every day of the year except two? Would we do it the same way from every time zone? There's a lot in this world that's dependent on the standardization of time and timekeeping across the world, and although I have to admit it would be interesting to do it the way you suggest for astronomical reasons, I wouldn't be willing to push it forward due to its impracticality for all other uses of time across the world. Time on a clock is absolutely an artificial human concept, but it's the best kind of artificial human concept: a useful one. Let's keep it, as is!

It's been an uncharacteristically quiet week from you here, so I'll be sure to give you a number of chances (and reasons) to make some noise over the next week. Thanks for those of you who weighed in here this past week; let's have a great next one together!

I've a question relating to the analemma that I haven't been able to find an answer to. Maybe you can help.

The knowledge of the analemma (and the equation of time it represents) is ancient. Ptolomy wrote of it, and included deferents in his astronomical model to account for it. But I've never heard *how* they knew of it.

Without mechanical clocks, how did they know about the difference between solar and mean time?

Thanks for the mention, Ethan. As much as I would like to be able to travel to the east coast for a session of visual & photographic observations, I still have to keep my day job. The comment re radio astronomy is real. I have a 13 foot dish sitting here doing nothing, so, building a spectrum analyser & putting it to use as a narrow-band receiver seems the next logical step in 'viewing' what is out there. This way, I have the better of both worlds, so to speak.

Oh please, not the equation of time!

Had to do the software for a midnight-off photocontrol timer a decade ago, but I wanted ours to be special. So I added seasonal corrections to the midnight calculations, essentially a mini equation of time. All that with an 8-bit micro and less than 1k byte of code.

Most people don't quite realize that the earliest sunset and the latest sunrise are not on Dec 21st, but roughly Dec 18th and Jan 8th. And most people think that a day is a day, but it varies quite considerably. And midnight isn't the middle of the night, it can vary from 12:15 AM to 11:43 PM if I remember correctly.