Comments of the Week #17: From solstice to subatomic and smaller

"We converse as we live by repeating, by combining and recombining a few elements over and over again just as nature does when of elementary particles it builds a world." -William H. Gass

Only here, when you repeat, combine and recombine your letters and words, the thoughts, questions and comments you submit are as completely as though no one else in the world had the same ones you did. This past week over on the main Starts With A Bang blog saw us take a deep dive into a number of diverse topics, including:

As always, we've set up synopses here on Scienceblogs for you to weigh in and discuss in our forum, and now at the end of the week, I get to respond in long-form to my favorite Comments of the Week! Let's see what you had to say. 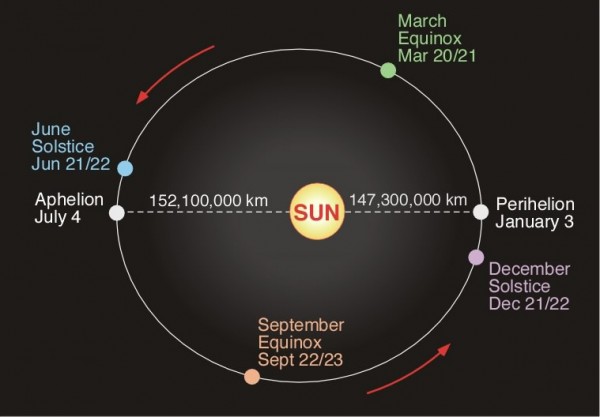 From Omega Centauri on the topic of the solstices/perihelion alignment of our orbits: "If you go beyond the level of casual observations of apparent strength/heat, the variation of distance is important to the climate. A six percent variation translates into approximately 80watts/ per meters squared, the “forcing” due to human added greenhouse gases is roughly one and a half watts per square meter!" 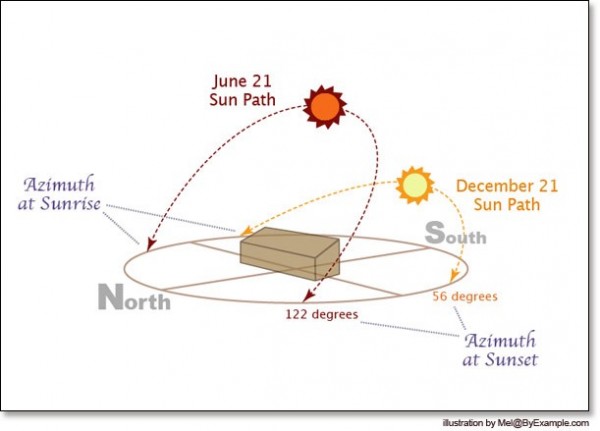 Image credit: Mel of By Example, retrieved from Tad at http://bloomingrock.com/2010/04/06/the-single-most-important-energy-sav….

Yes, it's true that if it were the other way -- as it may be close enough to consider to be true for the southern hemisphere -- you'd be talking about a summer peak of 1307 W/m^2 and a winter lowest maximum of just 488 W/m^2. But that's only a 6% shift compared to the 150% shift between summer and winter. The difference between a "short" and "long" season in terms of time, which is less than a week over a six month span, is also a very minor effect. Although it's an unrelated topic, the extra greenhouse gas effects on the climate, which correspond to 1.5 W/m^2 (I'm taking your word for it), is approximately equivalent to either a permanent increase in solar luminosity of about 0.11% or a total decrease in the average Earth-Sun distance of around 100,000 km. The problem with that effect is that it doesn't average out or go away; it just makes things slightly warmer overall for everyone. 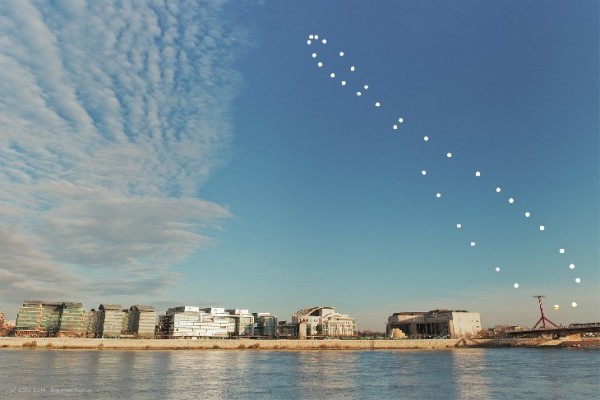 From Blaise Pascal on last week's comments of the week about our analemma: "The knowledge of the analemma (and the equation of time it represents) is ancient. Ptolomy wrote of it, and included deferents in his astronomical model to account for it. But I’ve never heard *how* they knew of it. Without mechanical clocks, how did they know about the difference between solar and mean time?"

I don't know how Ptolemy (or others) actually did it, but I know how I would if I didn't have a mechanical clock! All you need, believe it or not, is a primitive sundial, or a stick in the ground with a well-defined edge/top. As the days go by, you'll clearly be able to identify when solar noon is, or when the shadow cast by the sundial is at its shortest. And what you'll find, if you measure that point day-after-day, every day, is that the location of the "shortest" point changes in the same shape as the analemma! 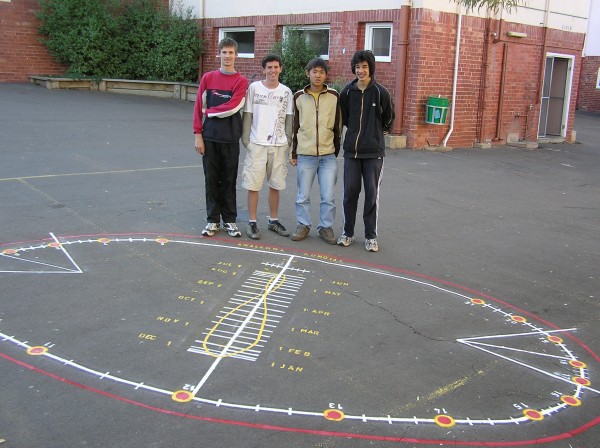 All you need to do is measure positions from one fixed location very carefully, with no need to keep track of time. It would become evident that not only did the angle change over time (as the Sun's position relative to the zenith changed with the seasons), but that the "time" of shortest angle appeared to move slow-and-fast as the equation of time dictates. In short, you'd get the same analemma shape you're used to!

In addition, if you could keep track of time, you'd be able to measure all sorts of analemmas using this method -- although they would get stretched as shadows tend to do -- at any time you wanted.

So that's not necessarily the answer of how the ancients did it, but that's how I would do it if I only had access to the primitive tools that the ancients did. Fun stuff! 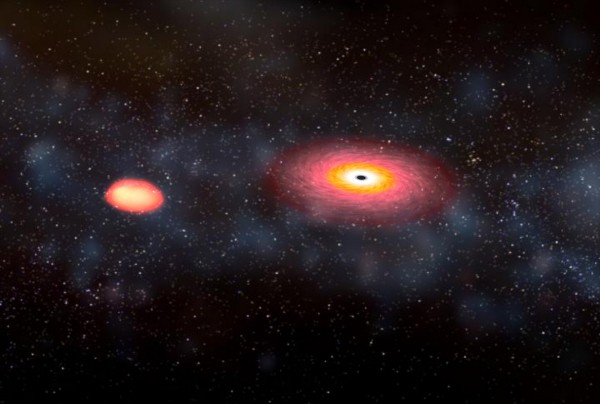 Image credit: Dana Berry/NASA, of a neutron star (L) and a black hole (R), via http://www.nasa.gov/mission_pages/swift/bursts/short_burst_oct5.html.

From Pavel on the smallest black hole in the Universe: "I think we have to wait for the small black holes a bit longer then the 10^68 years. It’s because the black holes are eating the [interstellar] matter and the mass loss caused by the Hawking radiation is compensated by eating 1 proton in 1 trillion years (if I’ve calculated it well for black hole of mass of about 3 sun masses). How long it would take till the Universe will be so empty, that a black hole doesn’t meet single proton in trillion of years?"

You know, one of the nicest things about Hawking radiation and black hole decay is how strongly dependent the rate is on mass. If you take a look at the formula for black hole evaporation time, this is what you get: 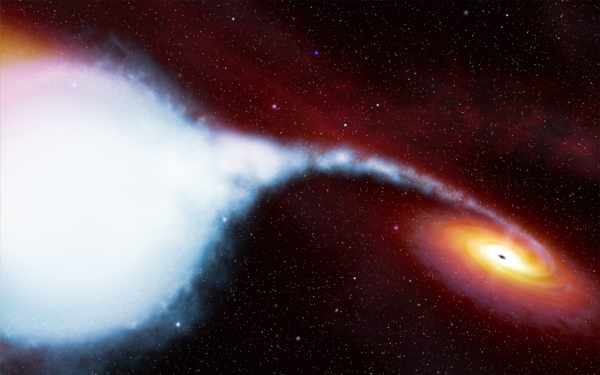 You see, our Universe, on black hole evaporation timescales, is still in its supreme infancy, with an age of only around 1.38 × 1010 years. The CMB will soon, like on timescale of around 1012 years, drop to energies low enough that black hole absorption of that energy will drop below Hawking radiation levels. We may get plenty of new stars and stellar mergers for the next 1014 years or so, but by time we start approaching 1020 years, most masses -- including black holes -- will get ejected from the galaxy and will simply be hurtling through empty (yes, really empty, thanks to dark energy) space.

Considering that 1020 years is tiny compared to timescales of 1068 years, our approximations here are actually very good! 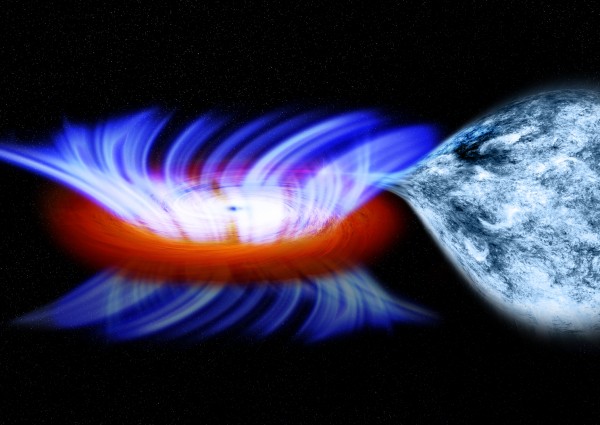 Let's see here. In a field -- the hard, physical sciences -- famous for droll, monotone communicators, you want me to stop using the, what, three tools I have to emphasize cadence, volume and excitement? So don't use italics, bold, or exclamation points, I suppose, is what you'd want.

You're always welcome to ask, and I'm always happy to make a note of what your feedback is. But we're talking about the most fundamental physical truths of existence here, and even though I do my best to take myself out of it, I don't really want to take my excitement out of it. But to acquiesce a little bit, I'll make it through the entire response to your comment without using one. 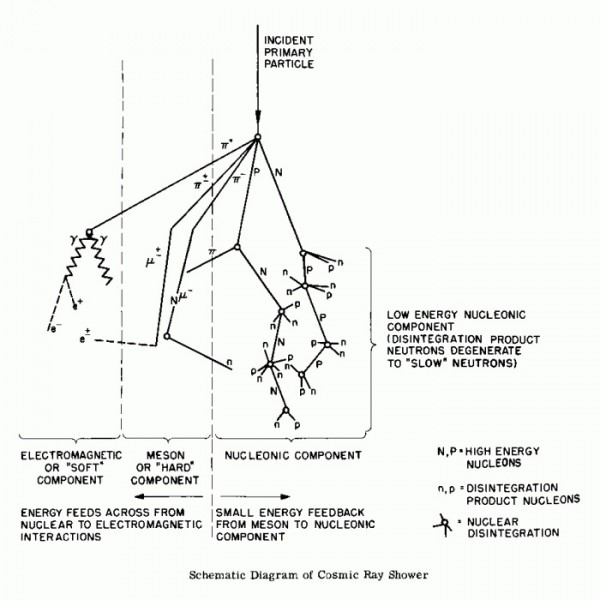 And finally, one more from Omega Centauri on the topic of carbon-14: "Obviously that reversion to normal is orders of magnitude too fast to be the radioactive decay of the C-14. The atmospheric CO2 (at least the C atoms), must be being exchanged with a largish reservoir of older carbon -presumably plants, soil carbon, and CO2 dissolved in seawater. On a longer term carbonates in the rocks….. Has anyone been able to use the C-14 ratio as a function of depth in the ocean to estimate how quickly ocean water overturn?"

But so far, the only way we have readings of this is through tree rings, where the carbon count is easy to identify. Could we maybe do something analogous to this by dissecting and dating various portions of coral reefs? (Their structures are mostly made of calcium carbonate.) Possibly, although I don't know enough about the biology of these organisms to know how reliable that would be.

The big, problematic issue with this is that Carbon-14 is about one trillionth of the Carbon in our atmosphere, and our atmosphere is only about 400 ppm carbon compounds, and the ocean is about 300 times as massive (with roughly thrice the carbon fraction) as the atmosphere. I'm not saying we couldn't measure this, but I am sure that I don't know how we would, and also that there are other difficult barriers -- such as dilution and background contamination from other, natural radioactive sources -- that might make searching for increased traces of C-14 more difficult at appreciable ocean depths. It's a good idea, but I can't speak positively about the potential practicality of it.

And that will take us to the end of this edition of Comments of the Week! Don't forget to leave yours for a chance at having them answered right here, and I'll see you back here tomorrow (or whenever you come back) for more stories about the Universe, and our place in it!

My point about precession and climate, was that the slight changes in the seasonal and latitudinal insolation can change the balance between glaciation and deglaciation in marginal regions. Given a sufficient length of time, and ice-albedo climate feedbacks, this can have an outsized affect upon the climate state of the planet. Rather than supporting the denialist argument, this should be taken as strong evidence that the climate system of our planet is extremely sensitive, and that the superficially small changes we are making will likely have large consequences.