How are neutron stars magnetic? (Synopsis)

“By allowing the positive ions to pass through an electric field and thus giving them a certain velocity, it is possible to distinguish them from the neutral, stationary atoms.” -Johannes Stark

One of the simplest tenets of electromagnetism -- the second of the fundamental forces ever discovered -- is that charged particles are accelerated parallel to electric fields, and are deflected as they move perpendicular through magnetic fields. In spectacular fashion, our Earth shows this latter phenomenon off as its bombarded by charged particles from the Sun. 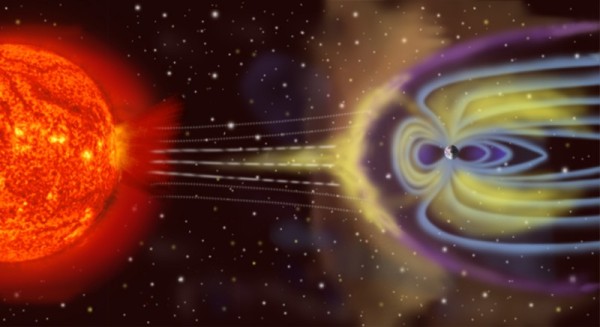 Why are neutron stars magnetic at all? Come find out here.

"[The black hole] teaches us that space can be crumpled like a piece of paper into an infinitesimal dot, that time can be extinguished like a blown-out flame, and that the laws of physics that we regard as 'sacred,' as immutable, are anything but." -John A. Wheeler To an astronomer on any other…

The Solar Storm of a Lifetime

"Concentrate all your thoughts upon the work at hand. The sun's rays do not burn until brought to a focus." -Alexander Graham Bell Imagine a beautiful, clear day. The Sun is shining, the skies are clear, and you couldn't ask for a nicer day. Image credit: © 2012 Free HD wallpapers. All of a…

How can we see black holes?

"According to the special theory of relativity nothing can travel faster than light, so that if light cannot escape, nothing else can either. The result would be a black hole: a region of space-time from which it is not possible to escape to infinity." -Stephen Hawking You may have encountered…

Down the barrel of a thousand cosmic cannons!

"If we knew what it was we were doing, it would not be called research, would it?" -Albert Einstein Our galaxy is but one among hundreds of billions in the cosmos, nearly all of which contain supermassive black holes at the center. Ours happens to be "only" a few million times as massive as our Sun…

You've got the gram masses of the neutron and proton switched.

The mag fields are supposed to decay with time, if something (presumably accretion) isn't feeding them. What is the mechanism of field loss?

Also we have the magnetars, where the field is much much larger, and the mass density of the energy in the mag field is really high. What fraction of the mass energy of such an object is the upper limit for mag field energy?