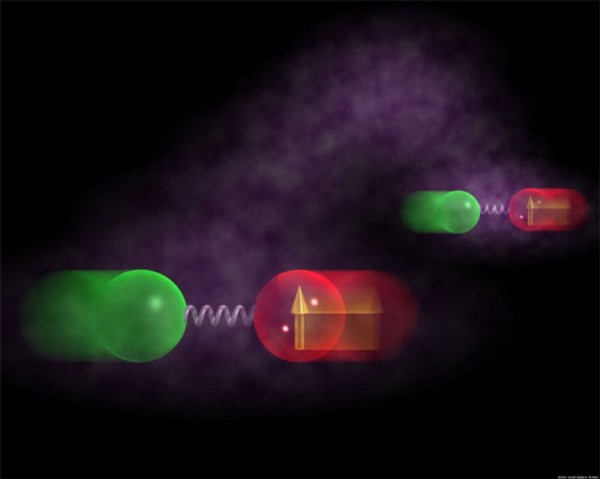 Does this violate the law of special relativity, which says the speed limit of everything in the Universe? As it turns out, the answer is no, but Einstein nevertheless thought this shouldn't be allowed to happen! Despite being the most brilliant mind of his generation, this is one of those times that Einstein got it completely wrong.

Come learn about the ghostly physics that Einstein called, "spooky action at a distance," just in time for Halloween!

“As far as the laws of mathematics refer to reality, they are not certain; and as far as they are certain, they do not refer to reality.” -Albert Einstein If you create an entangled pair of particles, and stretch them apart as far as you want, the entanglement remains. If you make a measurement of…

Black Holes Won't Incinerate You, After All

“You wait for a gem in an endless sea of blah.” -Lawrence Grossman On the one hand, we have General Relativity, our theory of space, time, and gravity. Image credit: Wikimedia commons user Johnstone; Earth from NASA's Galileo mission. It describes the Universe on both large and small scales…

Comments of the Week #158: from event horizons to time travel

“Time travel used to be thought of as just science fiction, but Einstein's general theory of relativity allows for the possibility that we could warp space-time so much that you could go off in a rocket and return before you set out.” -Stephen Hawking As always, there's been a new fantastic week of…

Comments of the Week #137: from quantum entanglement to string theory's basics

“A thing may be of deeper impossibility than another, in the sense that you can be more deeply underwater--but whether you are five feet or five fathoms from the surface you are still all wet.” -Brian McGreevy With everything going on in the world, it's always a wonderful reminder that here at …

I shall entangle Halloween in a Hilbert space.

Understanding dimensionality is the key to understanding the cosmos. If one took the Kaluza-Klein theory and stood it upon its head, meaning that if the fifth dimension was assumed to be proportional to the first four, rather than smaller, the true nature of the cosmos could be postulated. If one postulated a cosmos containing two major parallel universes; one with three spatial dimensions and one (actually 1/2) dimension of time and the larger, more dominate one with four spatial dimensions and two of time, the math works out.

If we humans had sensory organs that could detect these additional dimensions, than we would not regard them as spooky. If one assumes that the Homo sapiens brain can detect but not understand information originating in the sixth dimensional universe, many of our folktales would be interpretable.

Thanks Pete and Phil. A Hilbert space can have an infinite number of dimensions, oddly enough, but is is a 'information space' not a physical space. Yes I agree that if there were indeed extra physical dimensions beyond space and time, then it would be our perceptual limitations that render them strange.

Seriously Paul. Consider it a new paradigm rather than my having an incomplete grasp of modern physics, quantum chromodynamics or astrophysics.

Here is a brief presentation of the main points of this new paradigm: There are two dimensions of time available to the cosmos and both are uninhibited in the larger of the two major parallel universes that make up our cosmos. We here in this particular universe only have access to one of the dimensions of time, and that has undergone a phase change upon entrance into our universe, which I will refer to as Earth. Time has lost its ability to slide either way on its axis of travel on Earth, it has functionally gone from a liquid state in the opposite to a solidified state upon entrance into our universe, Earth. The uniform decay of Time creates many separate solidarities on/in the universe Earth.

Now calculate the size and shape of our universe considering that is the secondary, more accommodating of these two parallel universes, and those things we currently refer to as Dark Matter and Dark Energy pertain to our vague recognition of the margins of something we cannot see because we do not possess the sensory systems to recognize Heaven.

Further, we have no avenue to exam Dark Energy because it is composed of an energy form for which we have no ability to reproduce.

Many things could be said about our cosmos given those above criteria. One is that our universe could be considered to the candy shell of an M&M with the universe Heaven being the chocolate center, or perhaps a more exact metaphor: the cosmos can be thought of as a human brain; segmented and convoluted into sharp sulci and gyri. Earth is the universe along the surface--comparable to the grey matter of the brain. Heaven is the white matter. This implies that all that we see when we study the night sky is an illusion and it will not bring us closer to understanding the true nature of the cosmos.

Remember, its a different paradigm. Pot-shots are welcome.