If you create an entangled pair of particles, and stretch them apart as far as you want, the entanglement remains. If you make a measurement of one particle’s quantum state, you immediately -- and this is truly instantaneous -- learn the quantum state of the other. This is true whether the other particle is meters, kilometers, astronomical units or light years away.

Schematic of the third Aspect experiment testing quantum non-locality. Entangled photons from the source are sent to two fast switches, that direct them to polarizing detectors. The switches change settings very rapidly, effectively changing the detector settings for the experiment while the photons are in flight. (Figure by Chad Orzel)

And yet, according to relativity, there’s no way for information to travel that fast. Nothing at all, under any circumstances, can travel faster than the speed of light in a vacuum. To a casual (or even a serious) observer, it might appear that we’re violating the laws of physics in some fashion or other. But the truth is even scarier: nature is more surprising than anyone anticipated. 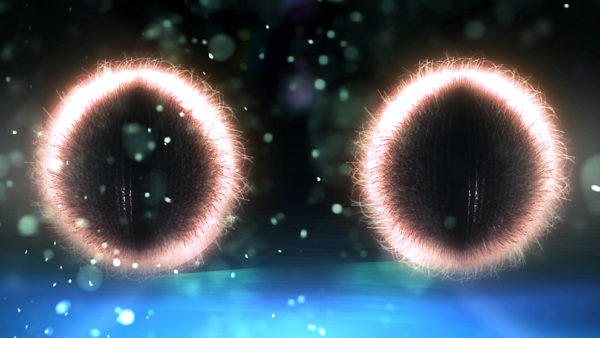 If two particles are entangled, they have complementary wavefunction properties, and measuring one determines properties of the other. But whether the wavefunction is merely a mathematical description or underlies a deeper truth about the Universe and a deterministic, fundamental reality is still open to interpretation. Image credit: Wikimedia Commons user David Koryagin, under c.c.a.-s.a.-4.0.

Some people are still troubled by this, while others simply accept it as how the Universe really is. See if your take meshes with the evidence on this week’s Ask Ethan!

Thank you for letting me know that I belong to an instrumentalist camp. Didn't know it had a name :D But yeah... nothing "real" about the wave function, same as with any other mathematical operation.

One of the mysteries that befuddles us is how this could possibly ever work but it does. Theory needs to be modified under the mandate of experimentation.

It's official: NASA's peer-reviewed EM Drive paper has finally been published - It works.

Wavefunction is real. Check out Aephraim Steinberg and Jeff Lundeen along with weak measurement:

And note that I could carefully slice a coin into a heads half and a tails half, then blast the two halves apart. Then I could catch one half and see it's tails, whereupon I know instantly that the other half is heads. Quantum teleportation! Magic!

regarding the coin example. In a classical system, you are correct.. that is what entanglement is. But the thing is that when you do the experiments on quantum systems with quantum properties, you find that experimental results disagree with classical statistical prediction. And you need a different kind of statistics in order to agree with experiment. Hence the quatum mechanics statistics. The whole "weird" part to some is why classical statistics doesn't work in that regime.

And note that I could carefully slice a coin into a heads half and a tails half, then blast the two halves apart. Then I could catch one half and see it’s tails, whereupon I know instantly that the other half is heads. Quantum teleportation! Magic!

That's not even what quantum teleportation is. You might want to sort that out before declaring "wavefunction is real."

Have you seen Arrival?

"you find that experimental results disagree with classical statistical prediction. And you need a different kind of statistics in order to agree with experiment. "

Heck, just look at the simple harmonic oscillator between QM and classical.

Entirely different at low energies, converging to the same answer as classical mechanics in the limit of infinite energy.

The "delayed choice quantum eraser" effect is even more fun, because it appears to cause retroactive changes in particle histories. You start with your entangled pair. You allow #1 to go through your double slit experiment as a wave-like, path-unobserved particle. Then after it goes through the screen you observe particle #2. Note that with the proper setup, you can observe #2 years after #1 goes through the screen. What pattern does #1 make? The particle-like double hump pattern, even though at the time it went through the slits it was not observed and was wave-like. The observation of #2 at time t+1 seems to have retroactively changed how #1 interacted with the screen at time t!

To use John's coin example, the delayed choice quantum eraser is more like a monty python-esque version of cutting the coin, where one of the participants says "I have the heads...no wait, I have the tails!" and while he's speaking, the partner coin switches what it looks like from tails to heads.

"Note that with the proper setup, you can observe #2 years after #1 goes through the screen."

Though if you change your location, as long as #1 and #2 are far enough apart in space, you can put them back together at the same "time" of your observation.

Your eraser requires that the interaction that determines the polarisation of #1 is not strong enough to disentangle the pair.